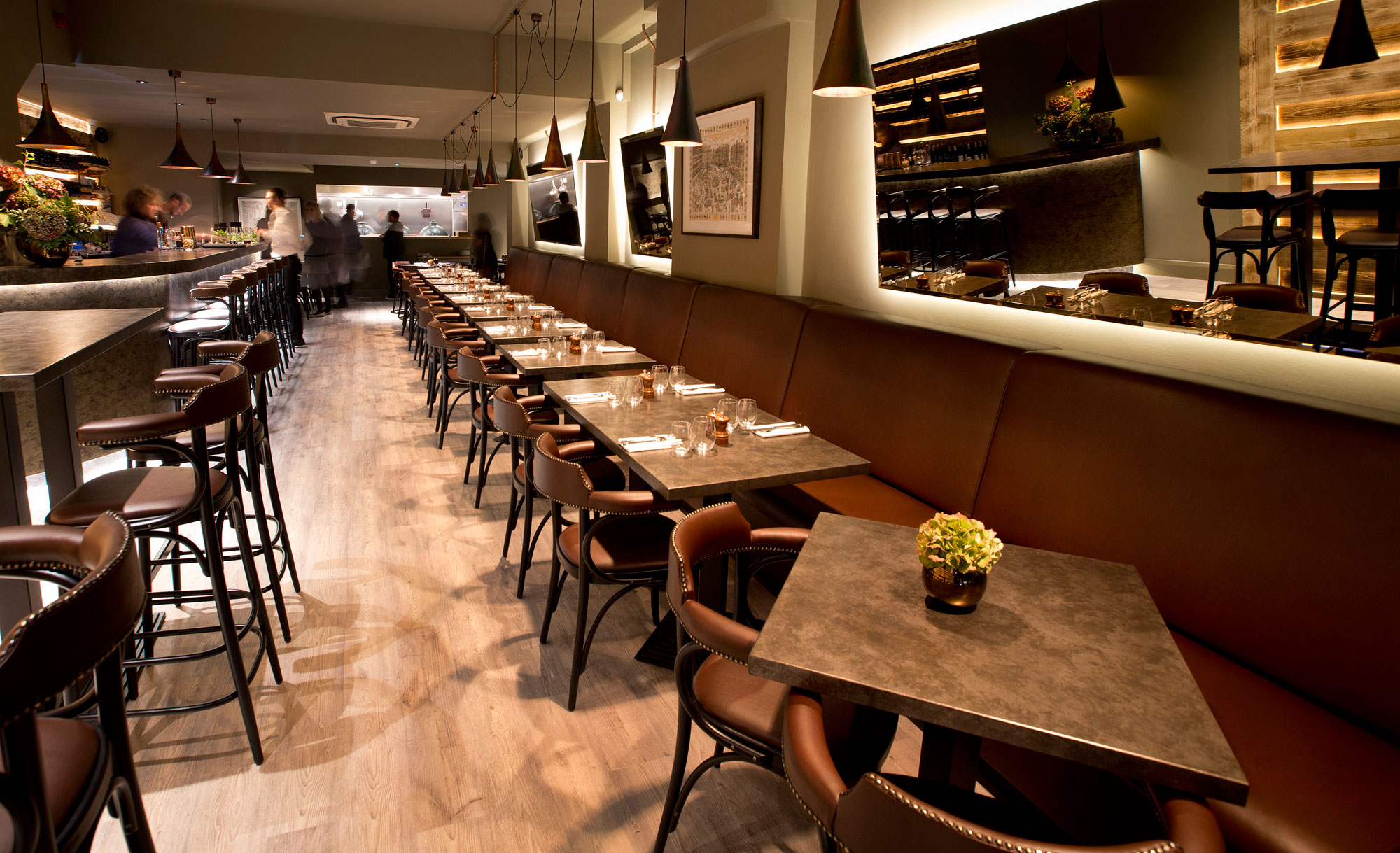 So you’re relentlessly searching Google with one thing in mind. Steak. But not just any old steak. You’re looking for the real deal. A champion cow. One that was grass-fed and hand-reared. 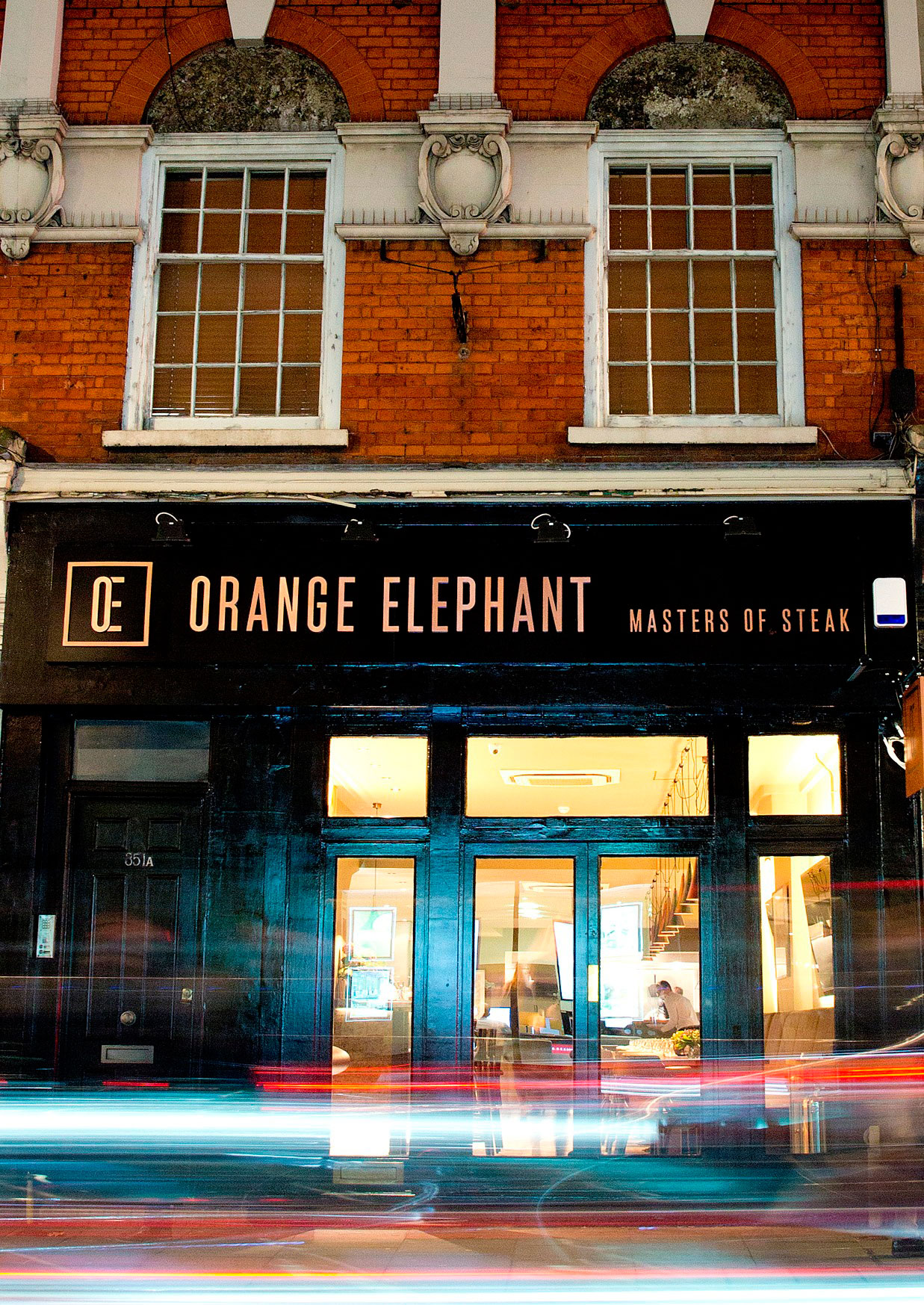 When it comes to London’s finest fillet, there’s no shortage of mouth-watering meateries on offer. It’s a tough choice, and there’s nothing worse than splashing out on a steak that doesn’t fit the bill.

So with just a single 12oz Sirloin on the menu, can a Chelsea chophouse with no choice really satisfy your carnivorous cravings? Orange Elephant think so, and now, we think so too.

Orange Elephant serves one dish; a Sirloin, aged for a minimum of 32 days. For £20 you’ll get a starter (a generously-sized walnut salad), your 12oz steak (cooked to your liking) and beef-dripping chips with a ‘secret sauce’. You might expect to pay more for top-notch beef, but don’t be fooled. Orange Elephant sources its meat from a magnificent breed of Devonshire cow (the Orange Elephant). Steaks are seared, roasted and smoked by an innovative Big Green Egg barbeque. The result? A perfectly charred, incredibly moreish, melt-in-your-mouth Sirloin. The signature Sirloin sits alongside the show-stopping Tomahawk steak (perfect for sharing), and vegetarians can opt for a gourmet truffle Mac ‘n’ Cheese. There are plenty of puddings for after dinner too. 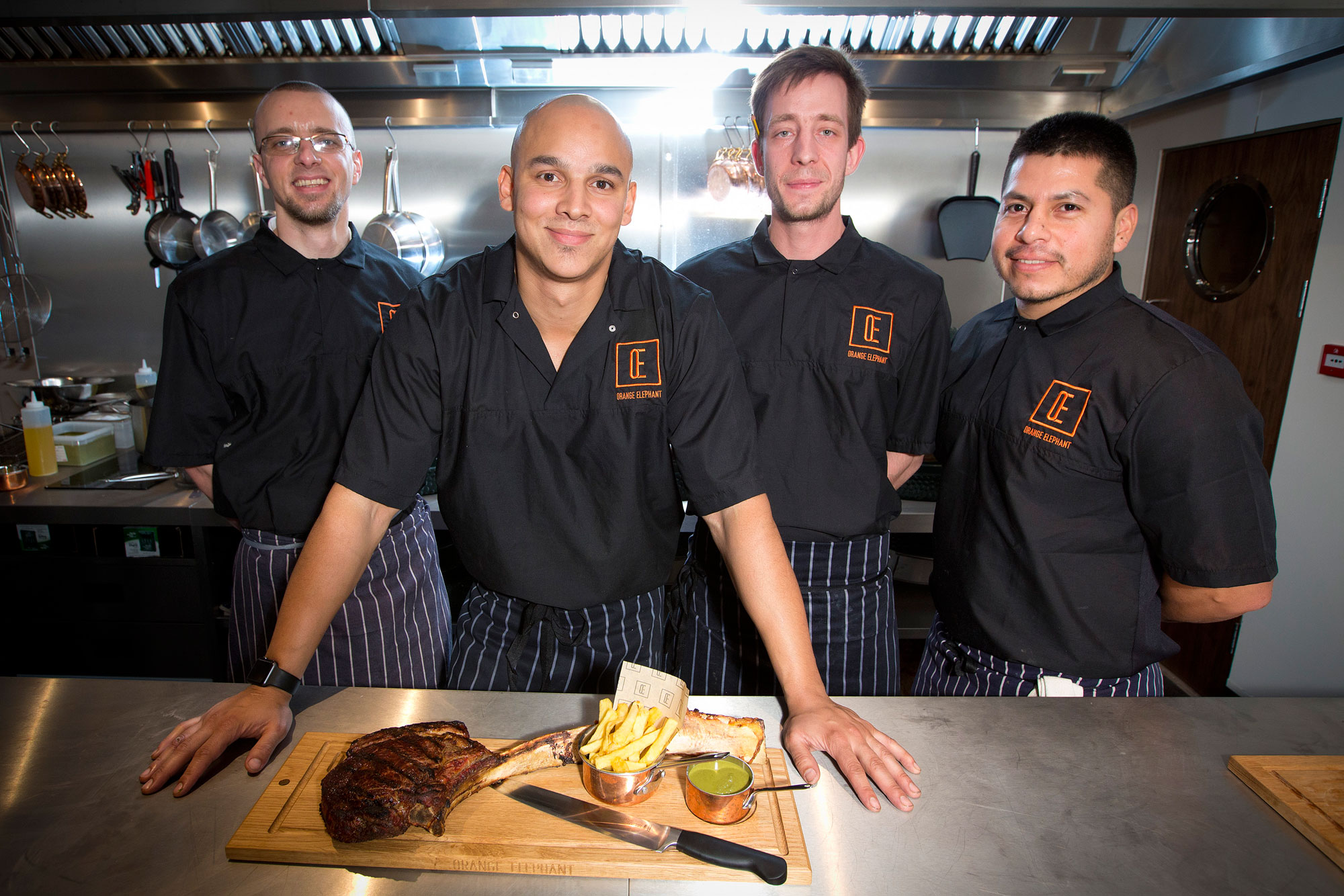 Head Chef Jai Parkinson (who’s worked with Michelin-starred chef David Burke) knows all too well the pain of a complex menu. It might be a laughable problem, but we’ve all been there. Rump? Rib-eye? Fillet? And then there’s starters, sauces and the smothered-in-garlic lobster side dishes to contend with. It’s enough to bring on an early bout of the meat sweats.

Dinnertime dilemmas aren’t the only reason behind the one-dish menu. Many restaurants find themselves facing mountains of food waste. So, not only is Orange Elephant incredibly efficient, it’s also making dining enjoyable again. At last. 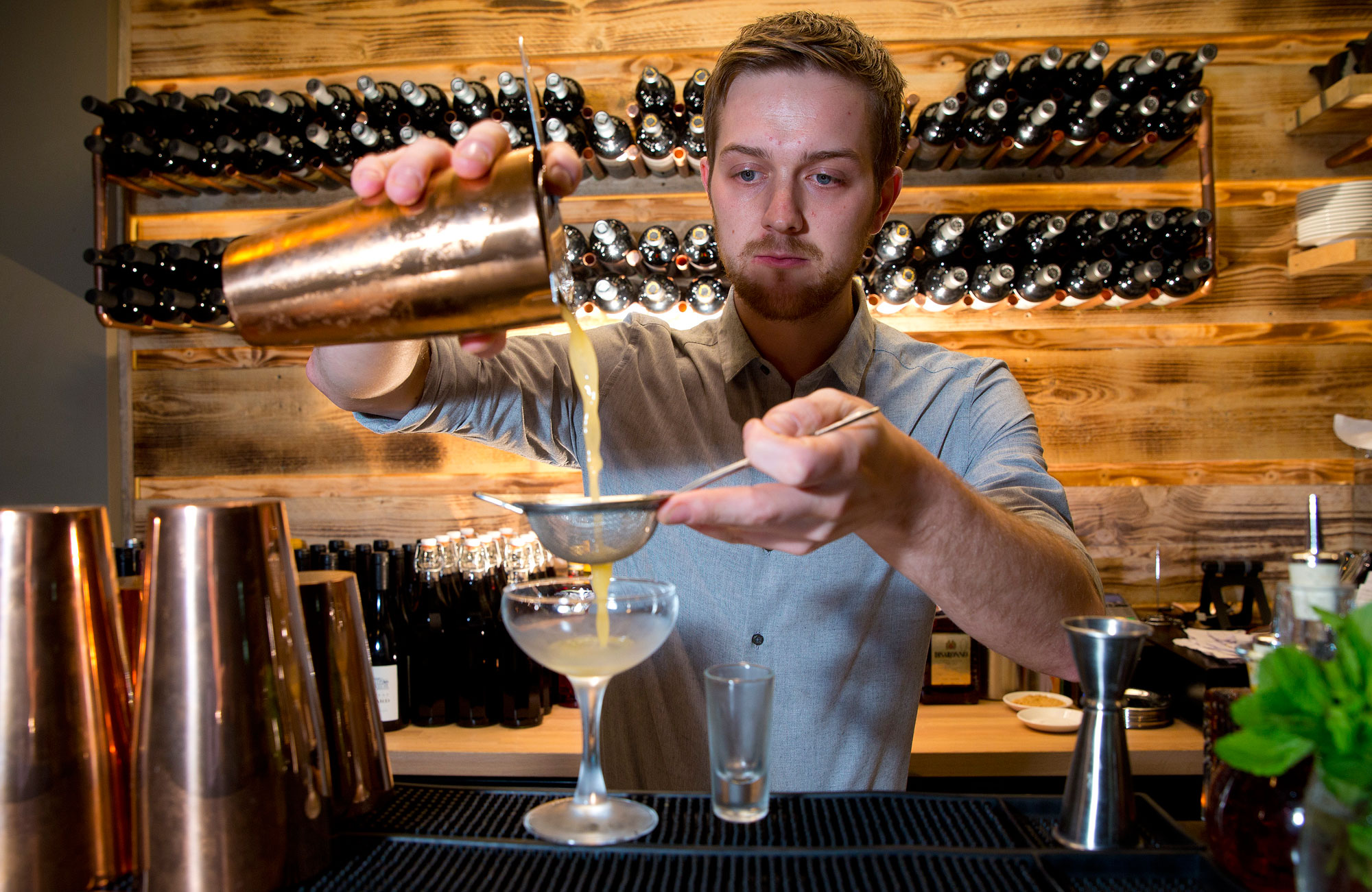 Orange Elephant’s drinks menu is simple and sophisticated too, featuring traditional cocktails with a twist (£9 each) – all blended with homemade spice infusions. Their no-nonsense wine list has all the reds, whites and fizz you’d expect from a high-end steak restaurant and includes a comically named ‘Big Guns’ section with their best-seller; The 2009 Barolo (£75 a bottle). Inside, the restaurant is chic and chilled, with wood flooring, exposed brickwork and a large open bar just begging for you to enjoy a cocktail at. 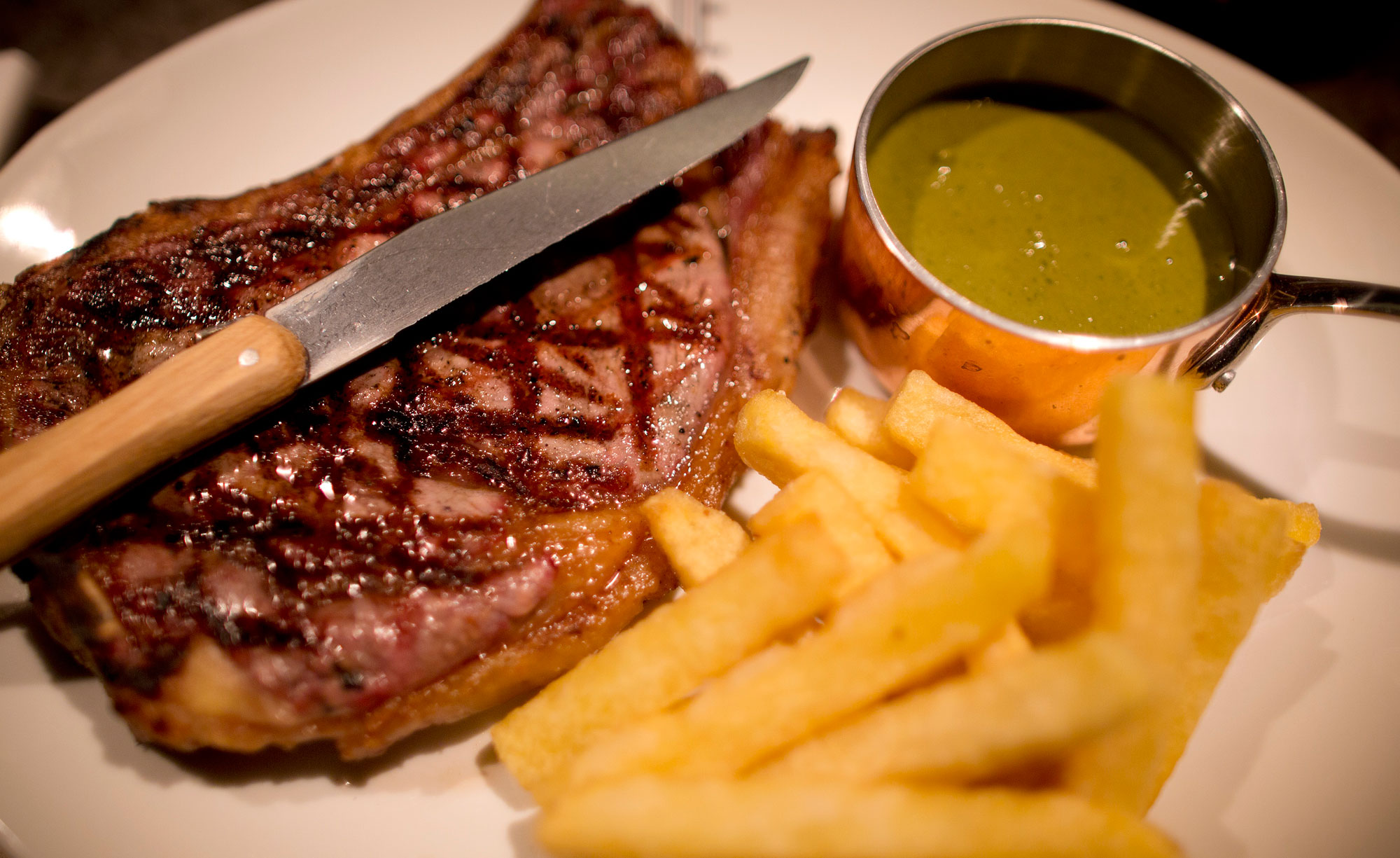 Orange Elephant opened at the start of November and was packed out with punters on its first weekend. It’s a sure contender for a top spot on London’s steak scene, and one that’s certainly not to be missed.

Orange Elephant – Where and How? 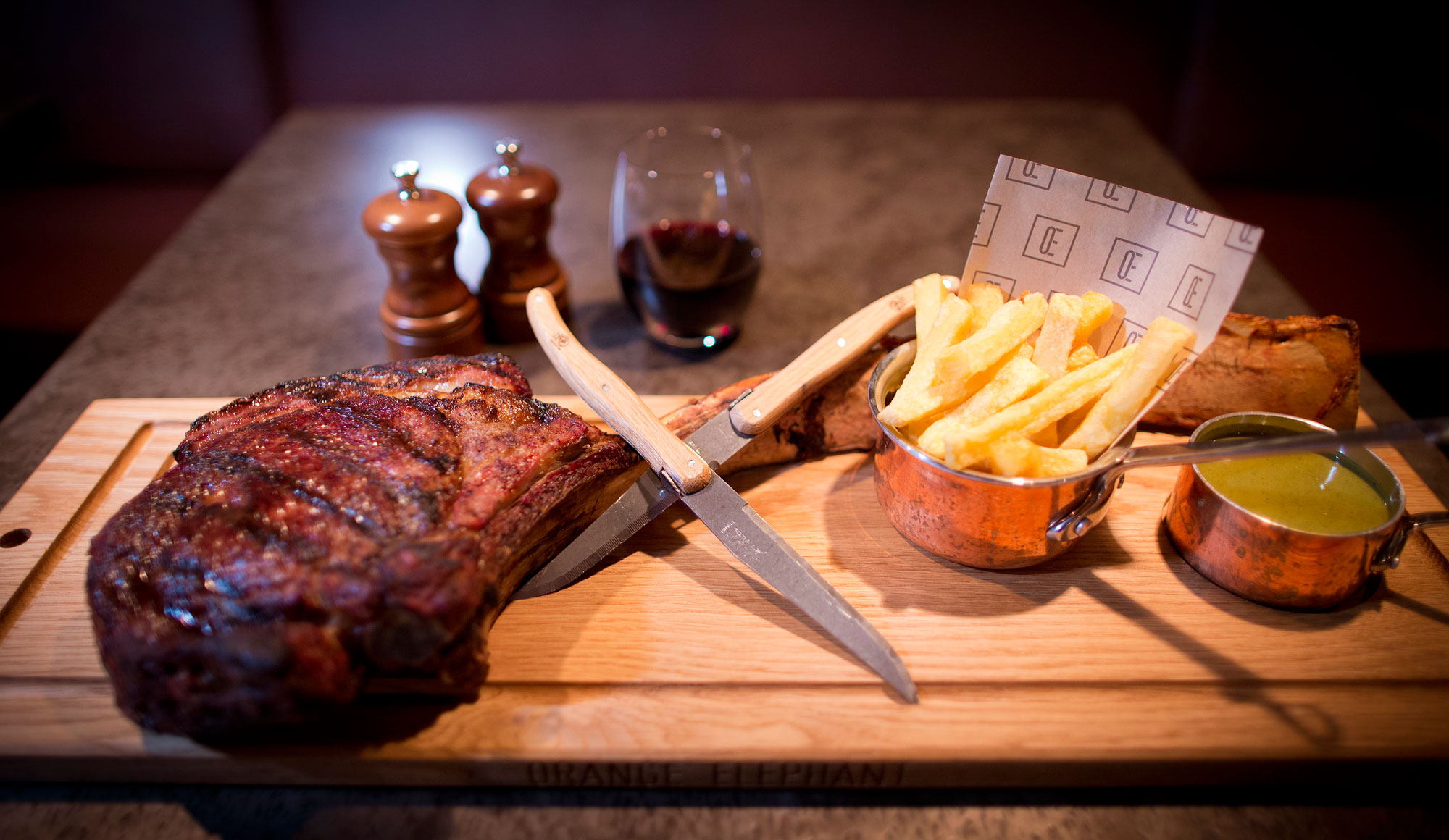