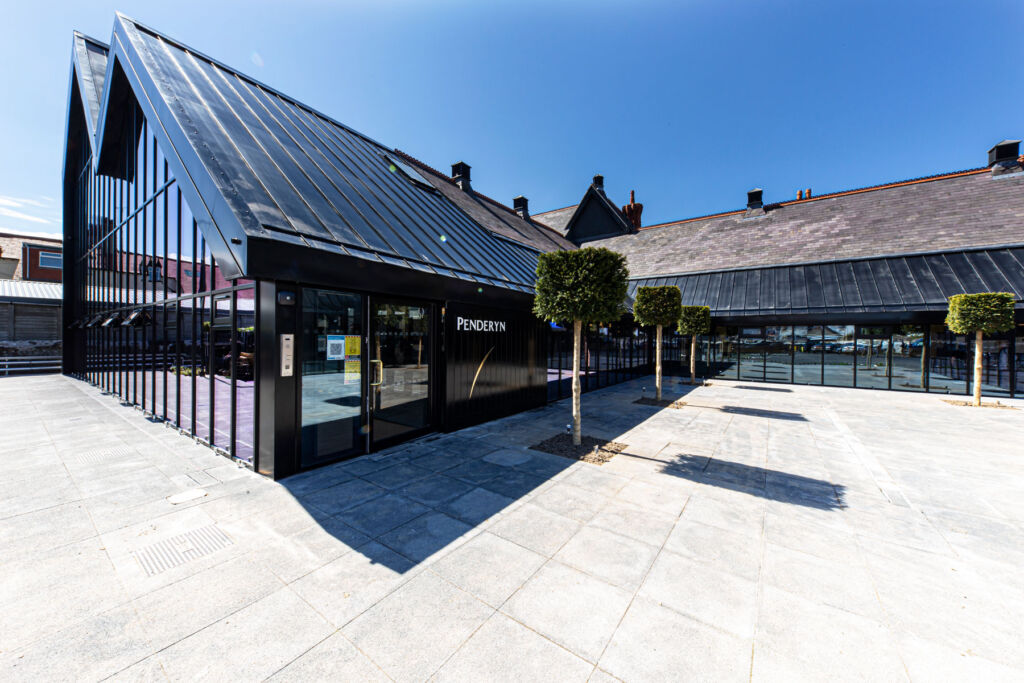 Most people would not associate Wales with whisky. That’s Scotland’s forte, right? So when a group of friends were looking to start a distillery producing whisky in Wales, their idea was considered ‘bonkers’. But 22 years on and with Penderyn’s second distillery in North Wales celebrating its first birthday this summer.

Sabi Phagura took a trip to the historic town of Llandudno to learn more and explore the area.

The idea of opening a Welsh whisky distillery in 2000 seemed like a crazy idea at the time. There hadn’t been anything of the kind since the nineteenth century, apart from a dodgy operation in the Brecon Beacons. The makers were repackaging Scotch whisky as Welsh until the Scotch Whisky Association clamped down on them, stopped their misleading operation, and trading ceased.

Davies admits that the idea of producing a Welsh whisky, most thought the idea was doomed from the onset, especially after the catastrophic errors made by a previous company. But through unwavering determination and commitment to the cause, Penderyn Distillery released its first whiskies in 2004 and 2005. 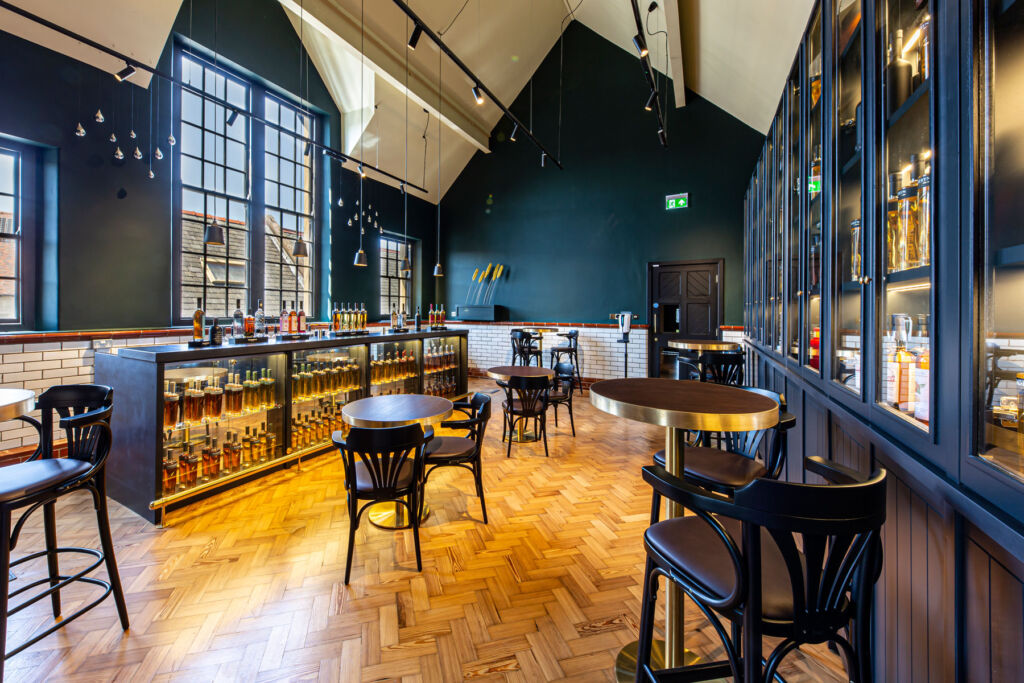 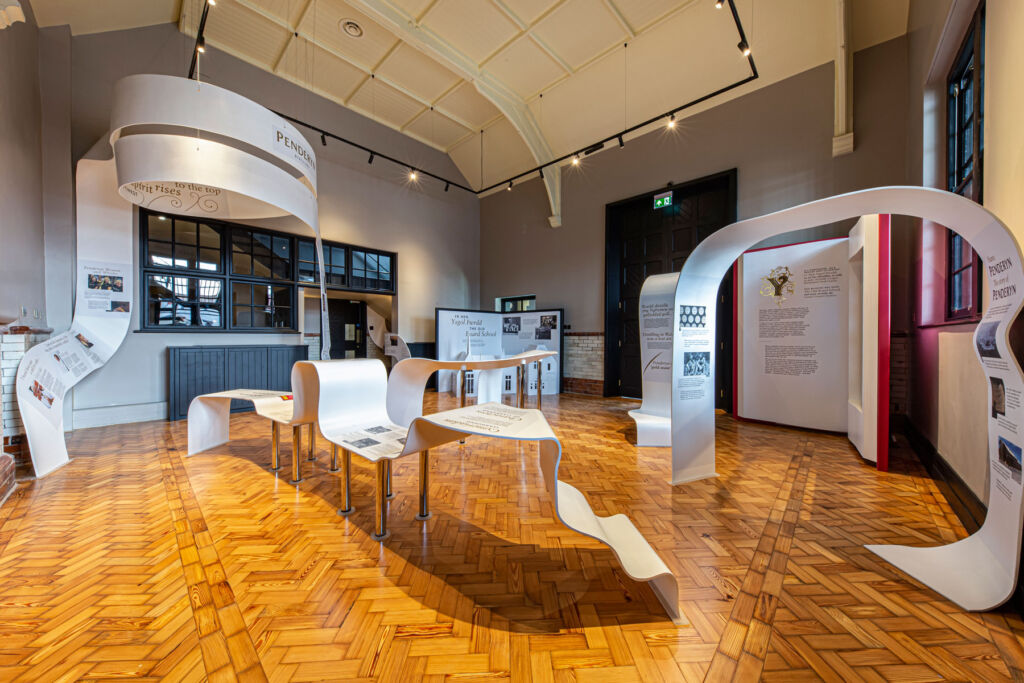 Combine that with the launch of other Welsh distilleries, and you have a thriving Welsh whisky scene which was once seen as just a pipe dream.

I was invited to take an hour-long tour of the distillery in Lloyd Street, which is housed in a stunning building which was built in 1881. The building has been fully restored, and many original features have been saved, including the parquet floors, wall tiles, roof beams and the old steel bannisters. 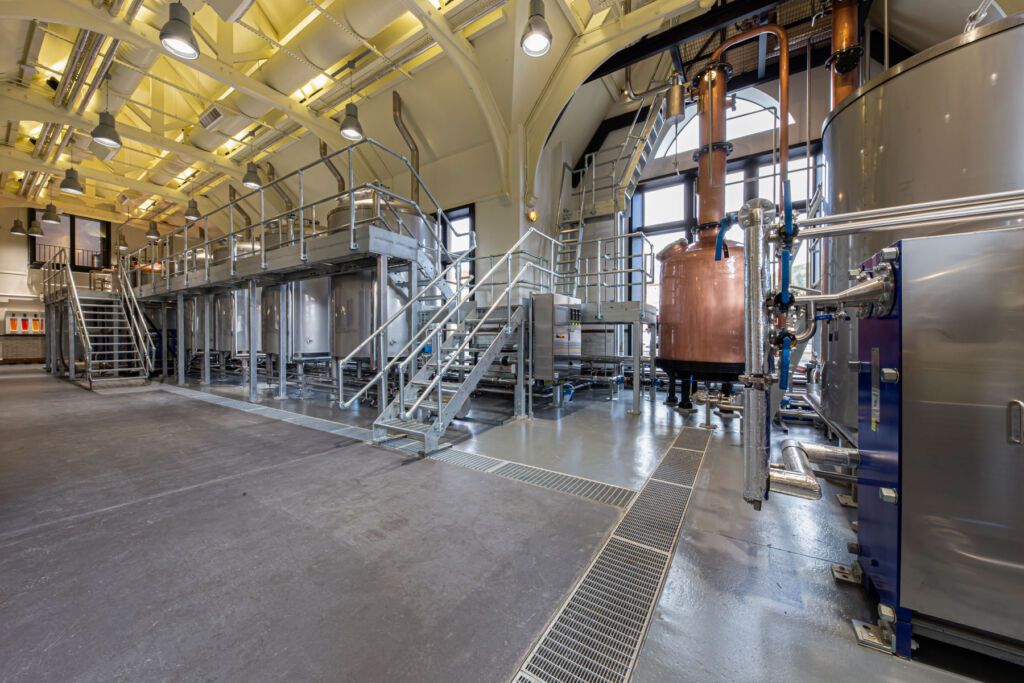 I learned during my time here that this was the first time in Penderyn’s history that they have used Peated Barley, and also commissioned a new Faraday Still, which is what makes Penderyn’s whiskies so unique. I was able to see the mill, mash tun and the company’s innovative single copper-pot Penderyn still as well as visit the very suave swanky Tasting Room at the end of the tour.

Speaking with Davies, I was given the lowdown on the company’s history. He said the team were determined to do things differently from the beginning, and that is why they came up with the idea of using a Faraday still. Davies explained that this was a cross between a pot and a column still. It works in batches and comes off at an industry-high ABV of 92 per cent to produce a light, new-make spirit.

Davies paid huge tribute to Jim Swan, who was instrumental in setting up the Penderyn style and gave the whisky its credibility. Jim came on board as a master blender in 2002 and developed Penderyn style based on a fruity new make combined with bourbon barrels – most from Buffalo Trace – as well as a Madeira cask finish. Davies fondly remembered travelling the world with Jim between 2005 and 2012, learning about whisky.

He added right up until his death in 2017, Jim was a non-exec director of Penderyn. Jim was incredibly proud of Penderyn and would don a branded shirt and talk to people about the product. 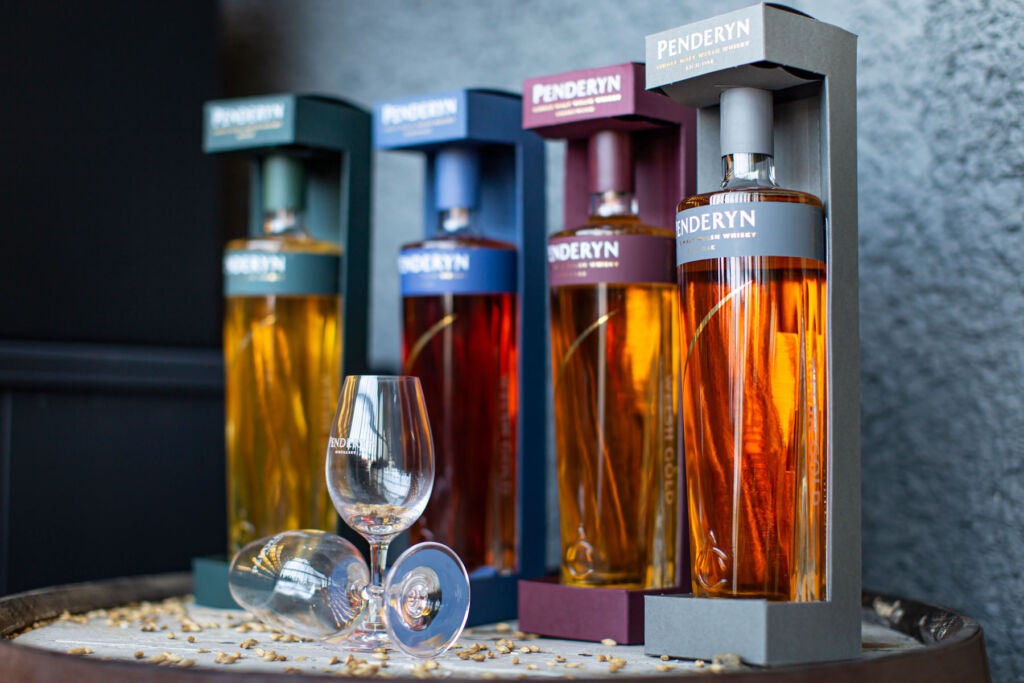 Today Penderyn whisky is exported to over 50 countries worldwide, and their whisky is also stocked in high-end shops like Harrods and Fortnum and Masons. And next year, Penderyn will be opening the third distillery in Swansea in the former Hafod Morfa copperworks. In addition to the old site, a three-storey visitor centre will be built by the side of it.

Davies said the old copper rolling mill building would be used to put the barrels in. Once completed, the Swansea site is expected to receive a substantial number of visitors. Davies wants Penderyn to make waves in the future and is keen for Welsh whisky to get a GI (geographical indication).

Llandudno is already a wonderful and historical coastal town, and the Penderyn Distillery is certainly fast becoming a tourist hot spot since it opened in May 2021. Llandudno is known for its Welsh coast and the 19-century pier, which stretches 2,295 feet (700 m) over the sea, makes it the longest in Wales. If you’re a hiker, the cliffs of Great Orme jut into the sea and make for a vigorous hike to work up an appetite.

You can always jump on the 1902 tramway, which has an upper and lower section and travels to the headland’s summit. And you will see plenty of Kashmir goats here that can be found grazing in Great Orme. They were first introduced by Lord Mostyn in the 19th Century. 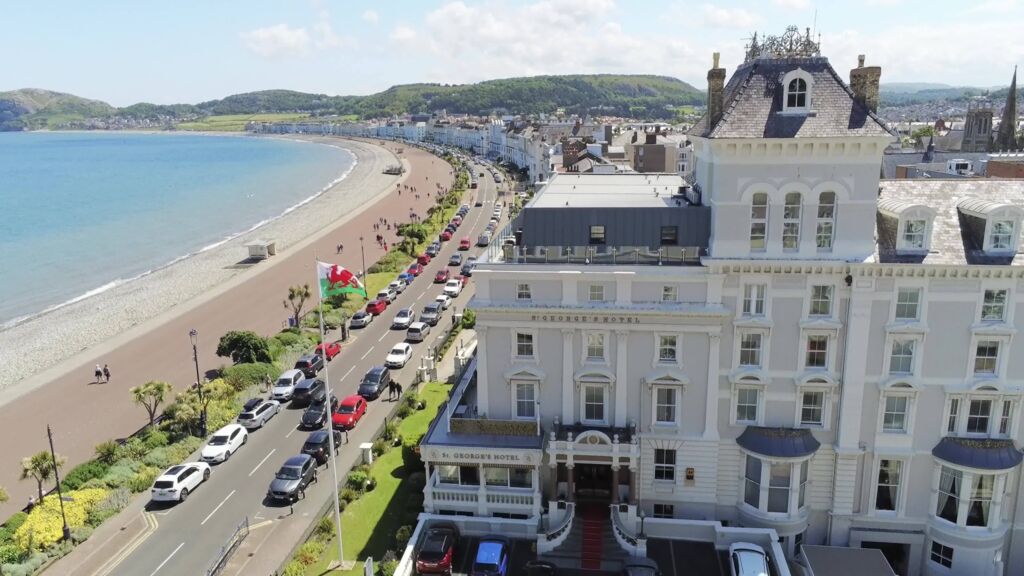 Alongside the stunning promenade, you will find plenty of places to stay and eat. I stayed at the St Georges Hotel, which has an enviable spot along the coast and is within walking distance to the main visitor attractions. Built in 1854, the foyer still holds the original brass-bell knobs labelled Boots, Oster and Chambermaid. These knobs were used by some very famous and distinguished people like Napoleon III and his wife Princess Eugenie, Bismarck, Disraeli, Gladstone, Churchill, Lloyd George and John Bright. Queen Elizabeth of Romania stayed at the hotel for five weeks in 1890 and was delighted with her visit, describing Wales as ‘a haven of peace’.

The hotel has been visited by seven British Prime Ministers over the years, including Winston Churchill. When he arrived at the hotel late at night, he asked for a candle, which caused a bit of a problem for the staff since no candles were available and all the local shops were closed. However, the staff managed to find a candle for him and later discovered that he always lit his famous cigar with a candle. 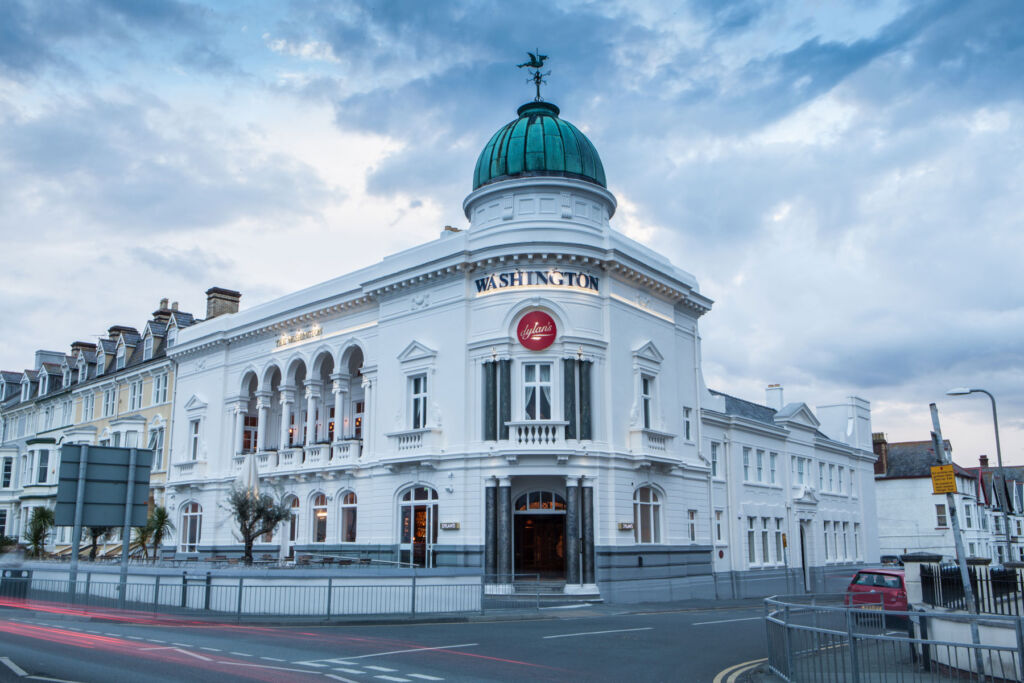 I didn’t get a chance to dine at the hotel as I had booked in to eat at Dylans, where their ingredients are sourced locally. From the meats of Edwards of Conwy, seafood of Menai Oysters & Mussels, to Gwinllan Conwy wines & Wild Horse Brewery Beers. 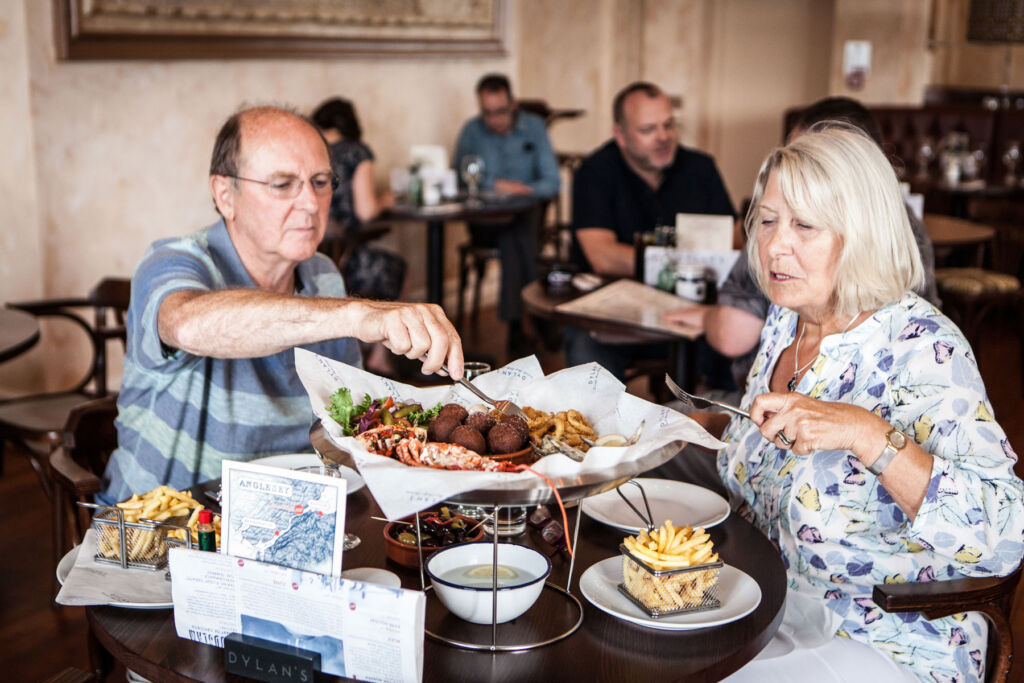 The portions were seriously huge here, and if you’re wanting to forget about the time spent here, you’ll notice several clocks which tell the wrong time. No one was able to tell me, but I wasn’t clock-watching for sure. 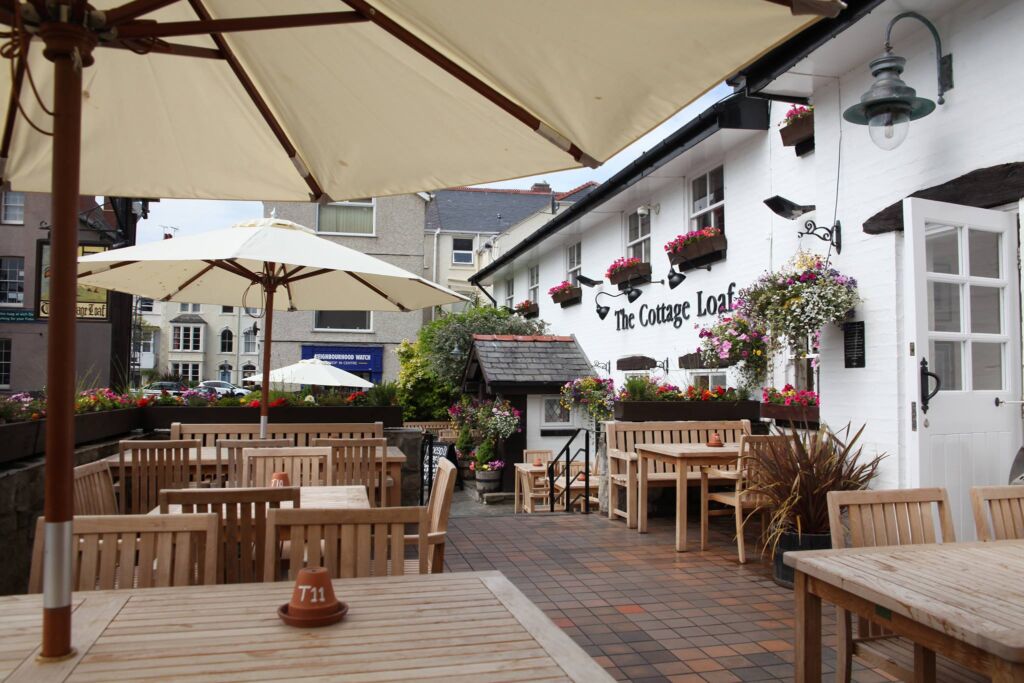 I can also recommend The Cottage Loaf for a bite to eat or a tipple. This Welsh pub is a collection of rustic wooden furniture, open fires and friendly faces creating the perfect stop when you want to take a break from sightseeing in the wonderful town of Llandudno, which was the inspiration for Lewis Carroll’s Alice in Wonderland story.