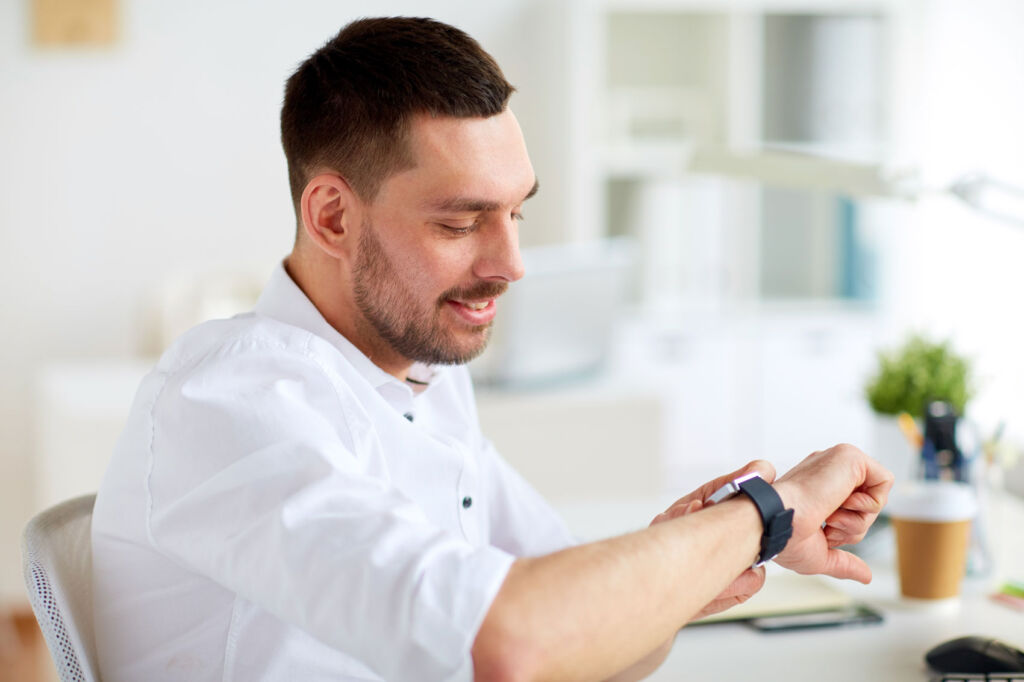 Either you or someone you know will have an old watch stored away, and there is a chance it could be worth some good money. Nowadays, nostalgia is booming, and so is the vintage watch collecting market. So, when you come across a vintage watch, you should try to keep it looking as good as possible, and one of the simplest ways to do it is with a polyWatch glass polish kit.

The vintage watch market is enormous; in fact, it has been reported that Sotheby’s alone sells around £100m worth of watches each year. Whether it is nostalgia, investment or something else driving collectors appetites, there is no denying that vintage watches are big business.

Most people don’t realise the value of their forgotten vintage timepieces and could find their watch or watches worth their gold weight. Irrespective of perceived values, all watches, particularly those of a certain vintage, deserve to be looked after and, if possible kept in, or restored to their former glory. This is where the kits offered by polyWatch can help.

When most people find a vintage watch stored away in the attic or in a box of assorted odds and ends in their home, the chances are that it won’t be in its original box, which, more often than not, results in scratches to the glass or acrylic face. The good news is that it doesn’t take much effort to get the faces looking as good as they were when made.

A type of watch that is particularly sought after in current times is the early edition LED’s, often referred to as digital watches. These watches were a revelation in the early 70s, which is almost half a century ago now. Most of the watches of this era came with glass faces which over time became scratched, and some to the point where the LEDs became almost illegible. Fortunately, I found a couple of LED watches in my attic, which were my father’s, and yes, mine too had scratched glass faces.

My two watches had just been sat on my desk, as I wasn’t sure what to do with them. It was, therefore, fortuitous when polyWatch contacted me and suggested sending me some of their kits to try. 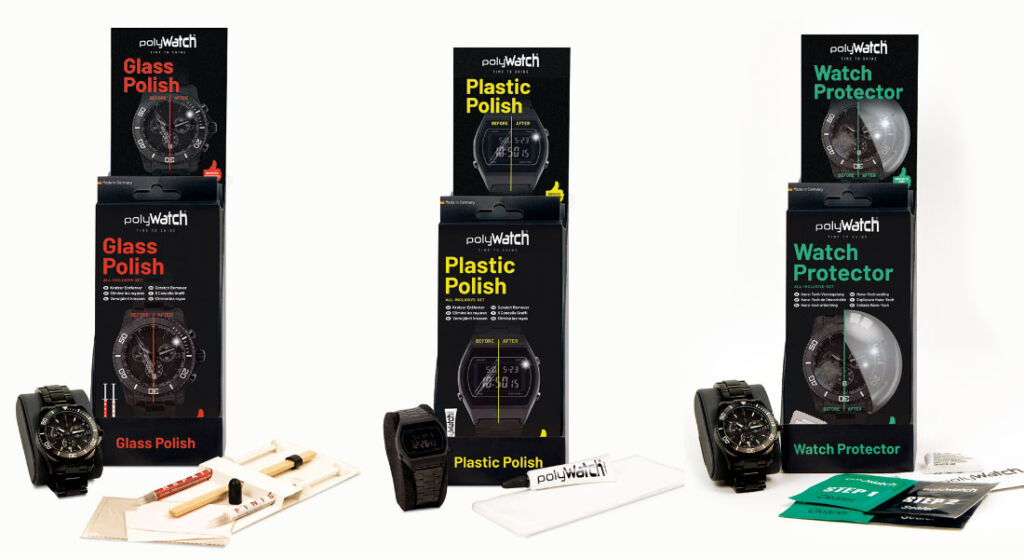 About polyWatch
polyWatch is a German company that has forged an excellent reputation in the watch industry. They currently offer three kits specifically designed to improve and enhance watches; Plastic Polish, Glass Polish and Watch Protector. The three kits come with everything you need and cost a lot less than you would imagine.

polyWatch is the brainchild of Markus Vogtmann and Ulrich Kopp, two watch fans who, while students found their prized Swatch Watch had a scratch in its glass. After considerable testing and experimentation in conjunction with a chemist, they produced a formula for a repair paste that worked and decided to launch it onto the market, and thus polyWatch was born.

Using the polyWatch Glass Polish Kit
As mentioned earlier, polyWatch offers three kits, but for my timepiece, I only needed to use their glass polish kit. Although the kit was being used on watch glass for this article, it should be noted that the kit can also be used on everything from furniture to cars and even on windows.

The glass polish kit comes with everything you need, including a couple of syringes, a polishing rod and strips and some easy to understand instructions. The whole process is incredibly simple, and even someone as inexperienced as me found it a breeze!

I decided that my Plustron LED watch from 1975 would be the perfect candidate and began by taping around the face to ensure that the paste only came into contact with the glass. As mentioned, you get two syringes in the kit, and to start, I needed to use the red syringe, which is clearly marked with large white capital letters down the side with the word ‘Repair’. 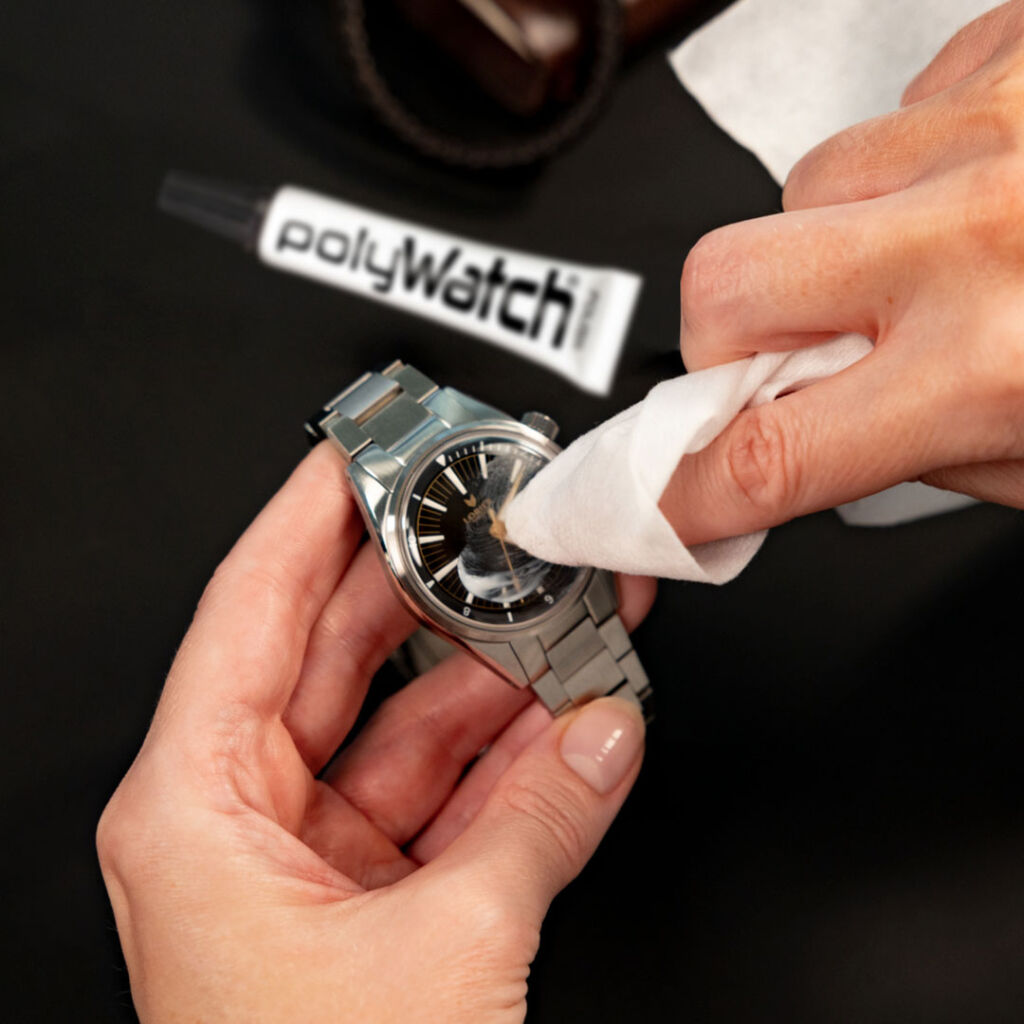 Photo for illustrative purposes only.

Using the syringe, you apply a small amount of the paste to the glass; it should be noted that polyWatch does not recommend you do this on coated surfaces, just plain glass.

Next, I needed to use the polishing rod, which is basically a wooden stick with a bevelled edge. I then took one of the pink clothlike strips, placed it over the bevelled edge of the rod and popped the black rubber ring over both to keep it in place.

Then it was just a case of some firm polishing over the surface following the angle of the bevelled edge until the scratches went. It didn’t take very long at all; in fact, I was listening to Hotel California by the Eagles and decided I had done enough before the song finished! I tilted the watch face under a bright lamp and will admit I was impressed with my effort. 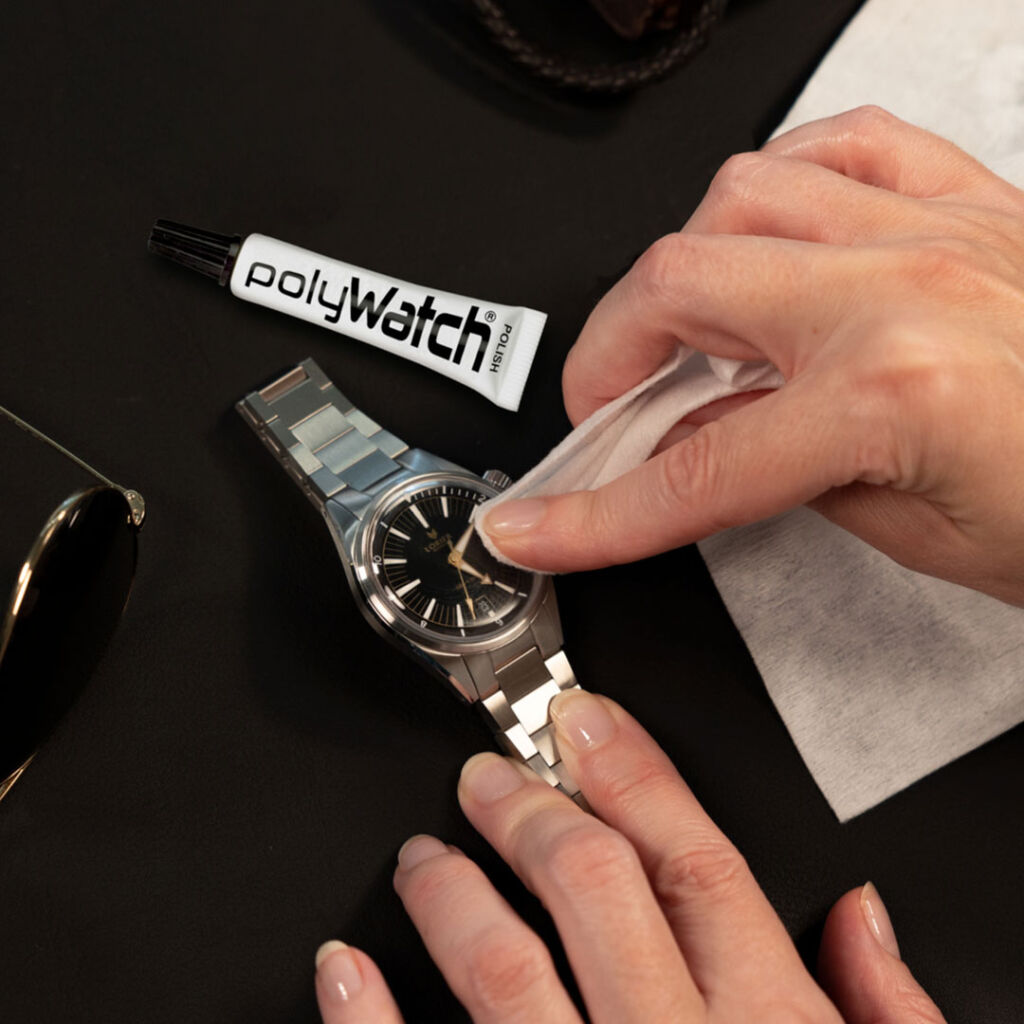 Photo for illustrative purposes only.

Next, I needed to use the repair paste, which is contained in the white syringe marked with the word ‘finish’. I applied the paste and then, using a new pad on the stick, went through the rubbing process once more. After doing this for a few minutes, I held the watch under the lamp again, and most of the scratches were gone. There was a couple remaining, but on the wrist, they were not noticeable.

The whole process seemed to take no time at all. In fact, I probably spent more time reading the instructions than I did polishing the glass face on the watch!

I have yet to try it on my other LED watch, which has even deeper scratches, but given how well the polyWatch glass polish kit performed, I am quite sure the result will be every bit as good.

Prior to being introduced to polyWatch, I had little idea of what to do to restore watch glass, some people on the internet suggested toothpaste, and others were saying that I should find a replacement glass. I appreciate all the advice offered to me; however, from now, I’ll only be going down one route, and that requires the use of polyWatch.

polyWatch – Where and how?

polywatch has three kits in their range, the plastic polish kit, which removes scratches from plastic watch crystals, the glass polish kit and a watch protector kit that creates a shield on a watch face. More information on each of these kits, including details of where to buy, can be found at www.polywatch.de.