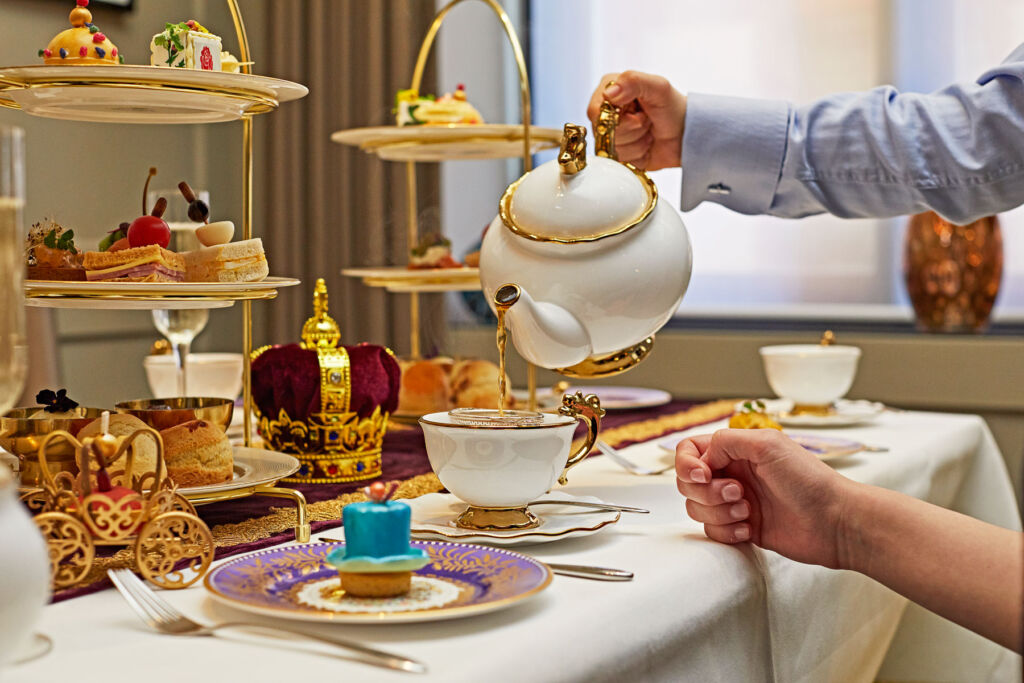 Simon Wittenberg heads to the five-star heritage hotel close to Buckingham Palace in the heart of London to enjoy The Queen’s Platinum Jubilee Afternoon Tea.

To commemorate Queen Elizabeth’s 70-year reign as monarch, Taj 51 Buckingham Gate Suites & Residences has introduced The Queen’s Platinum Jubilee Afternoon Tea at its restaurant Kona, which is available until November. Aptly priced at £70 per head, or £95 with half a bottle of Bollinger champagne, it is a small price to pay to sample a touch of pomp and ceremony, and to be a part of the fanfare surrounding this once-in-a-lifetime occasion. 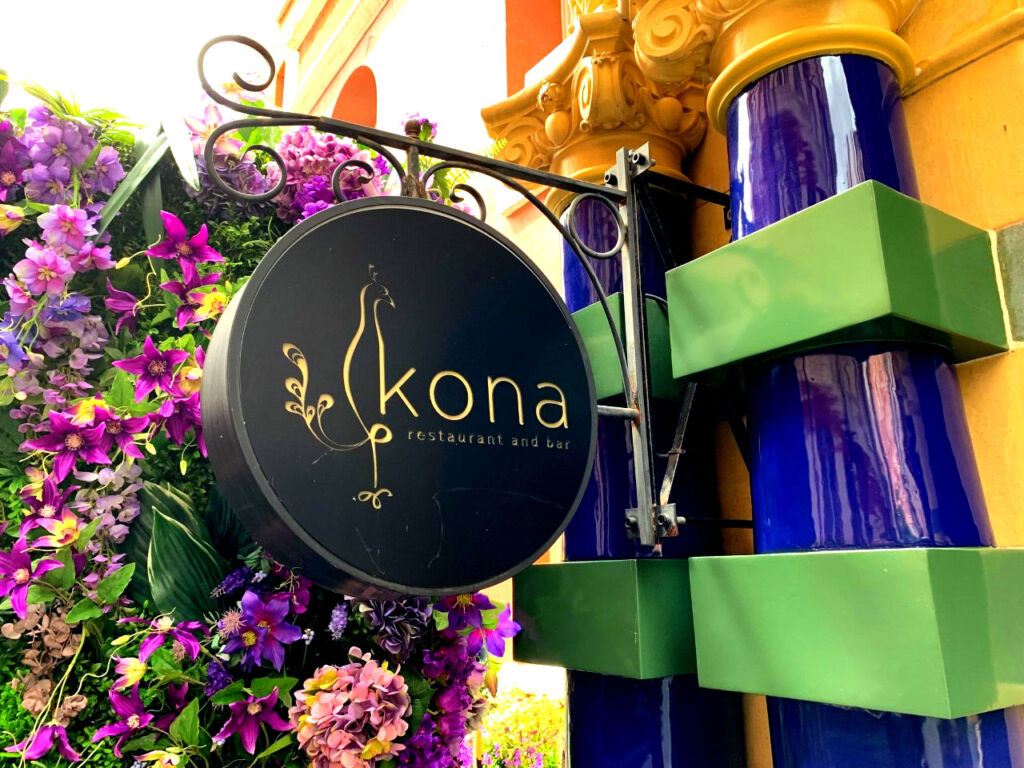 Sitting within the building at the far end of the luxury hotel’s internal courtyard, the setting at Kona is elegant and intimate, with just a few tables; hence only two-hour slots are bookable between 12:00 and 16:00 at weekends, and at 12:00 and 14:00 from Wednesday to Friday. 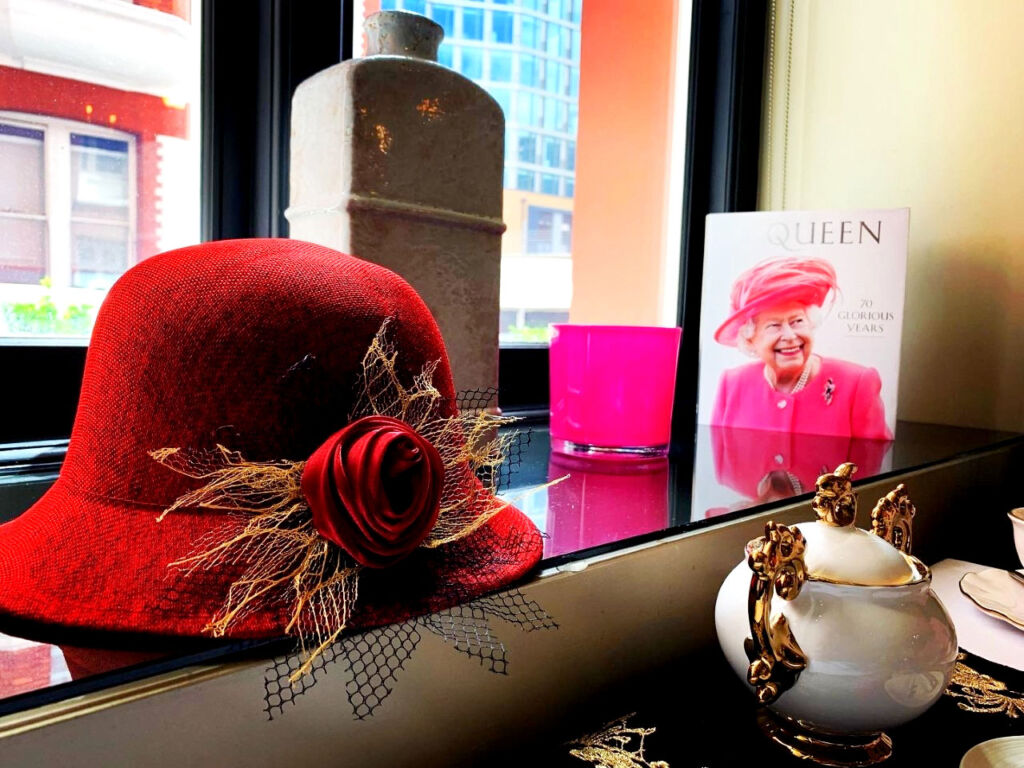 We visited on a Saturday afternoon at 14:00 and were sat at a table for two by the window, with the sill furnished with a couple of books about the Queen and a deep red-coloured hat. The table was dressed with a miniature crown, a pearl necklace, fine china tableware, and commemorative Platinum Jubilee plates sporting the royal coat of arms and gold embossed menus.

Breaking the central Taj wax seal revealed the selection of sweet and savoury delicacies that we were about to enjoy. If notified in advance, the delicacies on offer can be tailored to suit any dietary requirements (i.e. vegan or vegetarian) or allergies, so we omitted anything caviar or meat-related.

With everyone seated for tea, a bell was brought over to our table for my guest to ring, to signal that we were ready for the royal carriage to make “A Royal Entrance”, the opening chapter of our afternoon tea. 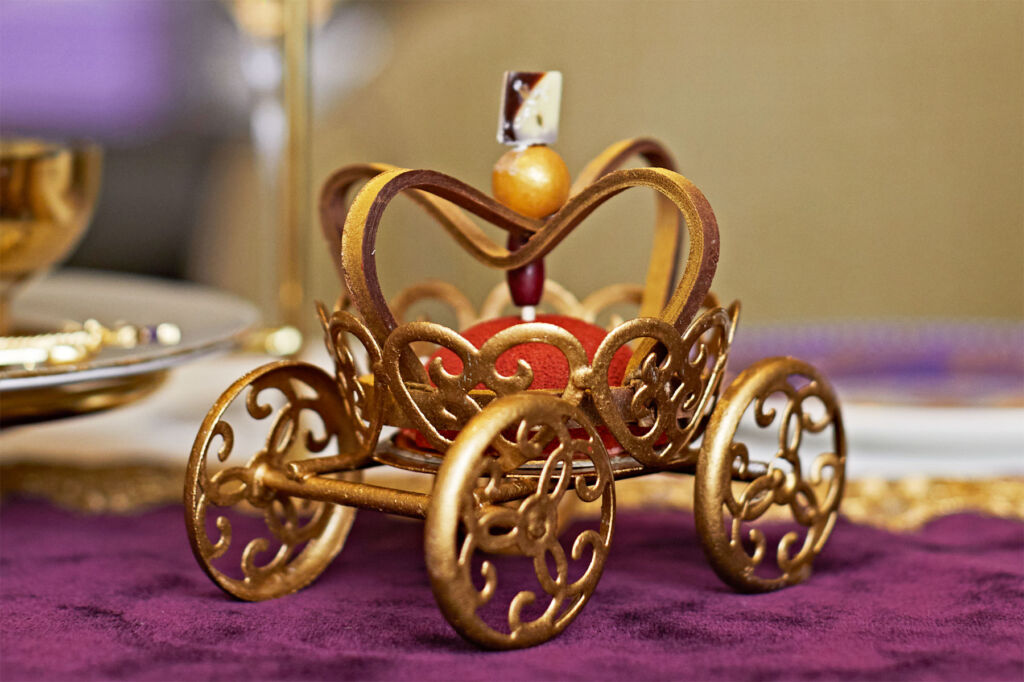 Sitting within an edible and ornate chocolate crown on wheels was a rose-coloured bombe glacée topped with a vertically-positioned coffee bean, a twist on the strawberry and chocolate ice cream served at Princess Elizabeth’s wedding to Lieutenant Philip Mountbatten in 1947, a few years before her ascension to the throne at the age of just 25.

It was deliciously smooth and was the perfect means to prepare one’s palate prior to embarking on the next stage of our culinary journey.

For The Queen’s Platinum Jubilee Afternoon Tea, there are two choices of tea on the bespoke menu, although other hot drink options are available if these are not to your liking.

Firstly, there’s “Majestic”, which is a very perfumed Assam variety with a relatively intense flavour, so it takes a bit of getting used to. Second up is “Regal”, a much more subtle and easy-to-drink light Earl Grey, which was certainly our preferred option. 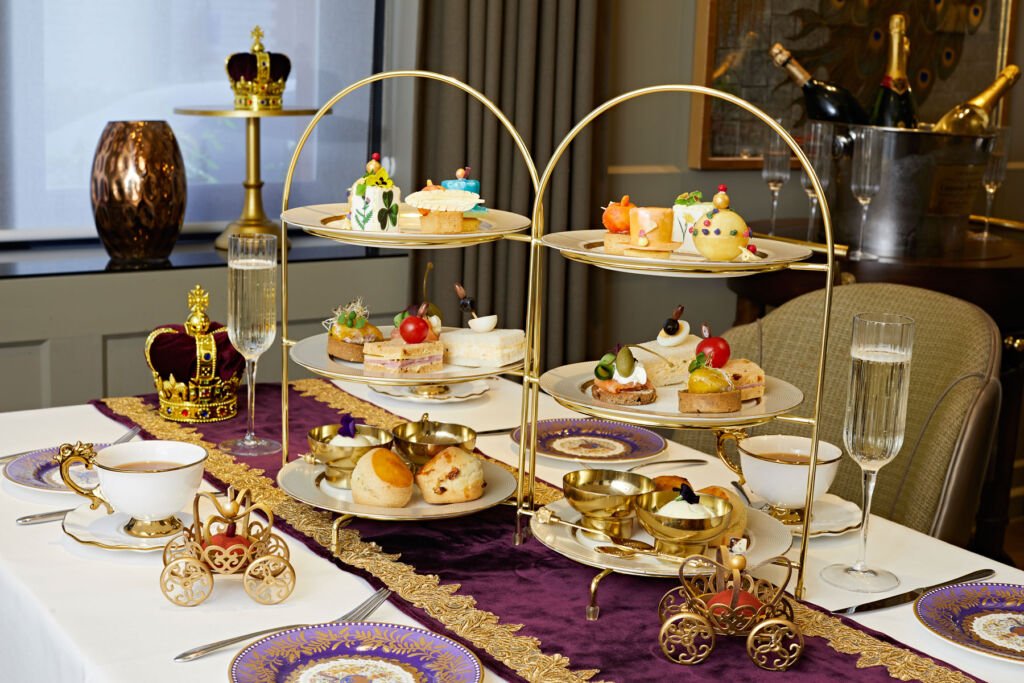 Accompanied by a detailed explanation from our hosts, and with our teapots manoeuvred onto the window sill to create space, we were presented with a golden three-tiered cake stand on which sat cakes at the very top, finger sandwiches in the middle, and scones at the base.

Importantly, there were no strict rules as to what order to enjoy them in, so this was left up to us. With a joint decision made to go savoury for the “first course”, we were treated to sandwiches inspired by the Queen’s multiple residents and estates. 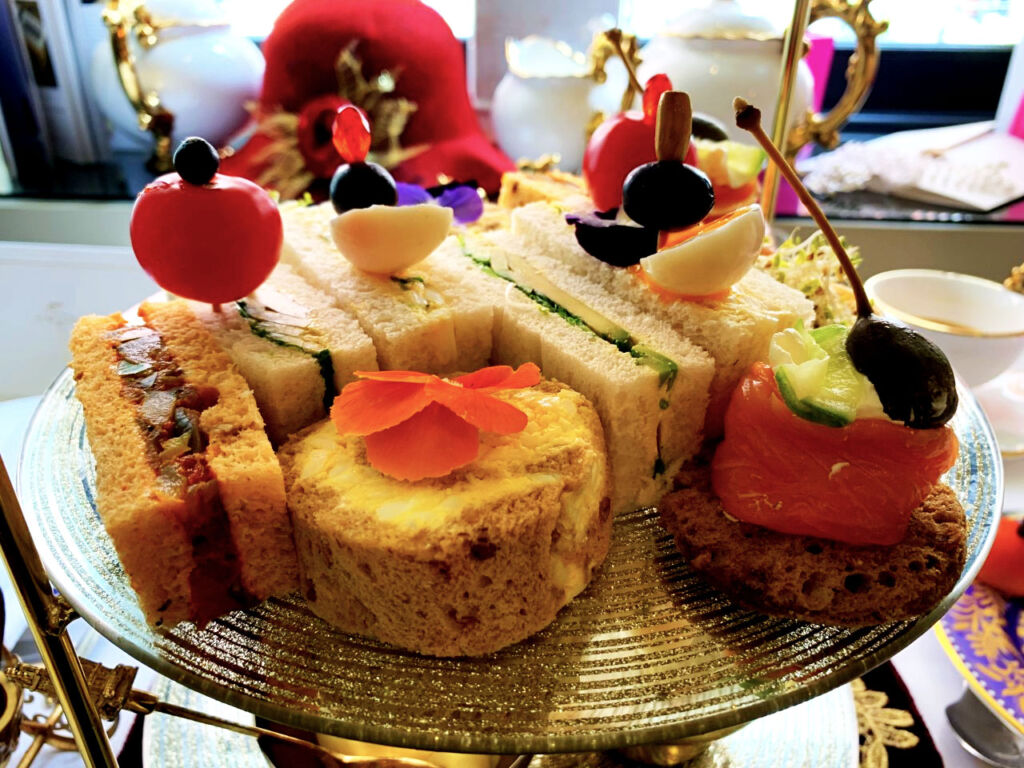 There was “The Windsor”, which took the form of a creamy egg mayonnaise and soft white bread topped with edible flowers and a marinated quail’s egg sliced in two, “The Sandringham” – a twirl of smoked salmon and cream cheese on a rye bread base finished with a large caper and finely cut cucumber, “The Balmoral” – a delicious baked spinach and tomato tart complete with mustard cress, and finally, to finish proceedings, there was a mixed vegetable filling on sundried tomato bread – the alternative to the Wiltshire ham-based “Buckingham”.

With a slow start due to too much chatter, we were encouraged to speed by our hosts as the clock was ticking down. “Her Majesty’s Delicacies” awaited, perched on the summit of the three-tier stand. This was a magical array of small cakes boasting incredible creativity and artistry, all designed to recreate an element relating to Queen Elizabeth. 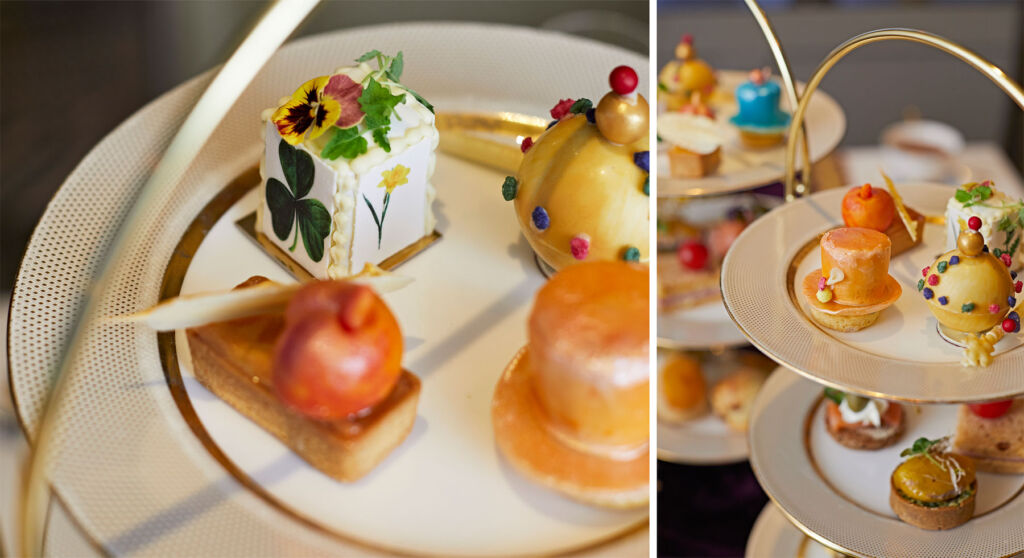 Reminiscent of Her Majesty’s immaculate dress sense, delicious Earl Grey and orange mousse-shaped pink and blue hats perched on a sable Breton biscuit named “A Royal Collection” were our first taste of the pastry chefs’ excellent creations. These were followed by “The Gardens of Britain” – a rose-scented and fairly stodgy square-shaped chocolate cake decorated on each of the four sides with flowers painted on icing from each of the UK territories which featured in the Queen’s coronation ceremony in 1953.

The rectangular frangipane, peach and apple tart called the “Pêche à la Reine Alexandra” was my stand-out piece. This was because it was full of flavour and had a lovely texture, whilst my eyes were also drawn to the white chocolate-shaped feather – an edible replica of the Queen’s brooch that she was given at her Diamond Jubilee in 2012. To finish our time on this tier, and with our stomachs filling up, it was time for the “Crown Jewels” – Valrhona chocolate in the shape of beautifully-crafted orbs and sceptres seen at the Queen’s coronation in 1953.

With our hosts once again subtly encouraging us to start to finish up, as the kick-out time approached, i.e. 16:00, when the next guests would be arriving, we took the hint and vacated our table after the room had cleared out with 15 minutes to spare, and with just two Cornish scones remaining. With our personal menu to keep as a memento, it was time to greet the Taj 51 Buckingham Gate Suites & Residences a fond farewell and hit the streets of London to soak up the Jubilee atmosphere. 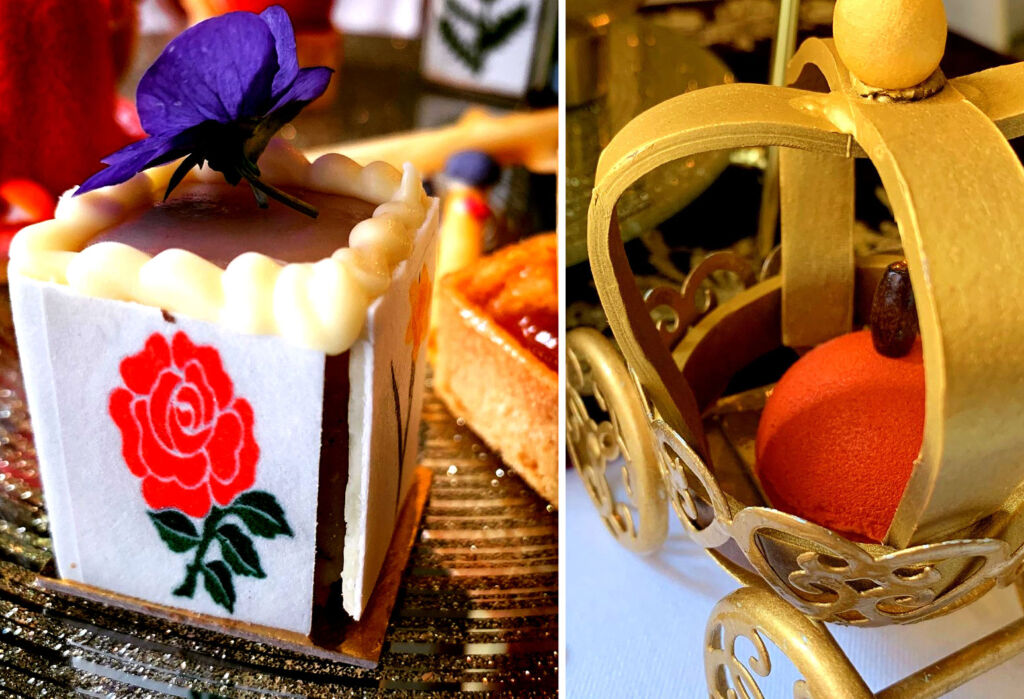 In summary…
It was evident from the very start that a lot of thought had gone into engineering The Queen’s Platinum Jubilee Afternoon Tea, to make it a truly special experience. It was an equally nice touch to be regaled by a few anecdotes about the Queen from years gone by to bring the significance of this occasion alive, and to link what we had to eat to key moments and qualities of the monarch.

What’s more, for those who like to peer over their food and take a few snaps, The Queen’s Platinum Jubilee Afternoon Tea is a photographer’s dream, thanks to the many royal-themed accessories, vibrant colours, and luxurious surroundings.

With this quintessentially British and Platinum Jubilee-themed afternoon tea available for another few months, and for those looking to spend time with friends and family a few paces away from Buckingham Palace, Kona at Taj 51 Buckingham Gate Residences & Suites is the place to be. 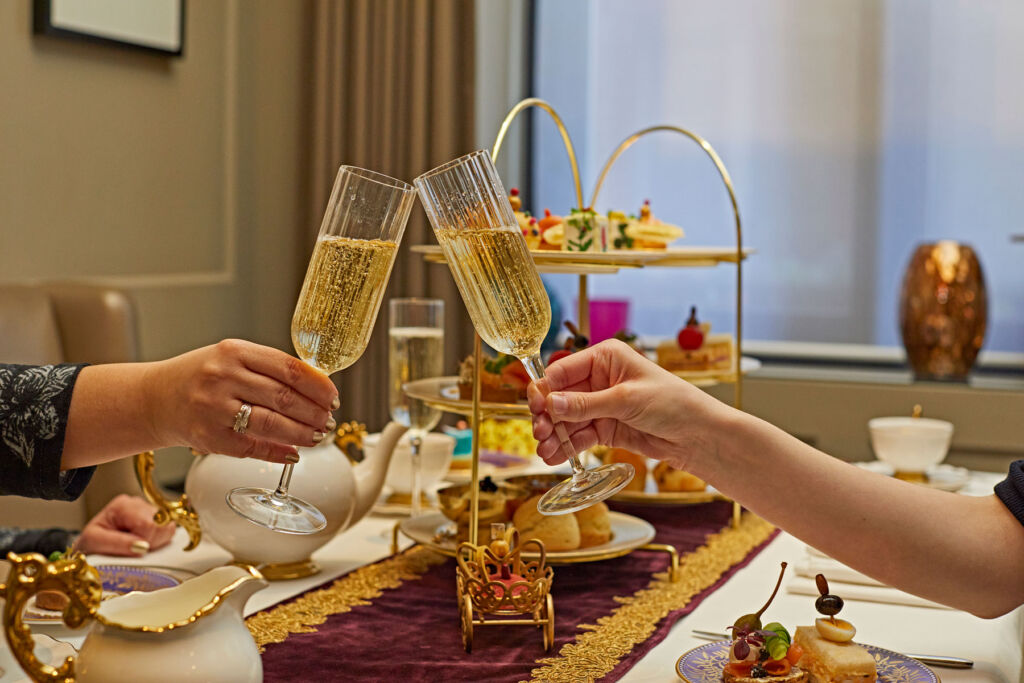 The Queen’s Platinum Jubilee Afternoon Tea at Taj 51 Buckingham Gate Residences & Suites – Where and How?

The Queen’s Platinum Jubilee Afternoon Tea is available until 30th November 2022. For more information or to make a reservation, visit https://www.taj51buckinghamgate.co.uk/Fine-dining/Afternoon-tea.

See pictures from our visit to Kona at Taj 51 Buckingham Gate Residences & Suites on the Luxurious Magazine Instagram page.