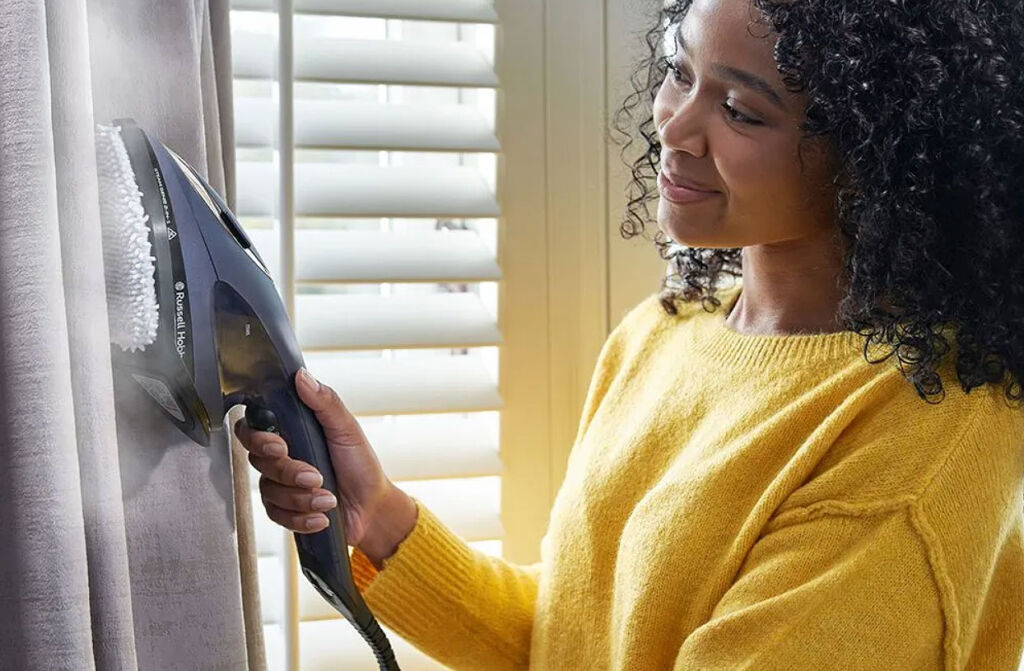 We’re always keen to try things that could save time and money and make life simpler, and a product that seems to fit that bill is Russell Hobbs’ Steam Genie 2-in-1 Handheld Steamer. We decided to test one in an everyday home environment to discover what it brings to the table.

Russell Hobbs is a well-known name across British households. Since 1952, the company has been manufacturing products for families, which resulted in it becoming the primary kettle maker in the country.

However, it’s not only kettles where the company excels; it manufactures an extensive range of products for the home, one of which is its Steam Genie 2-in-1 Handheld Steamer, a product that, in our minds, should help to save time and make lives simpler.

One thing frequently said is that spare time is one of life’s greatest luxuries, which was the driving factor behind us wanting to put the Steam Genie 2-in-1 Handheld Steamer to the test. In today’s fast-paced,  image-led world, looking good is a requisite for many, and with this comes the often laborious task of ironing. Unless you are fortunate to own clothing manufactured with anti-creasing material, most of your apparel will, at some point in time, need to call upon the assistance of an iron.

A traditional iron is a general route for most if you have multiple clothes that need to look presentable. However, other methods must be sought when time and space are an issue. An excellent alternative to a traditional iron is the Steam Genie, and not only can it bring the wow back to clothes, it will also kill up to 99.9% of bacteria whilst doing so. 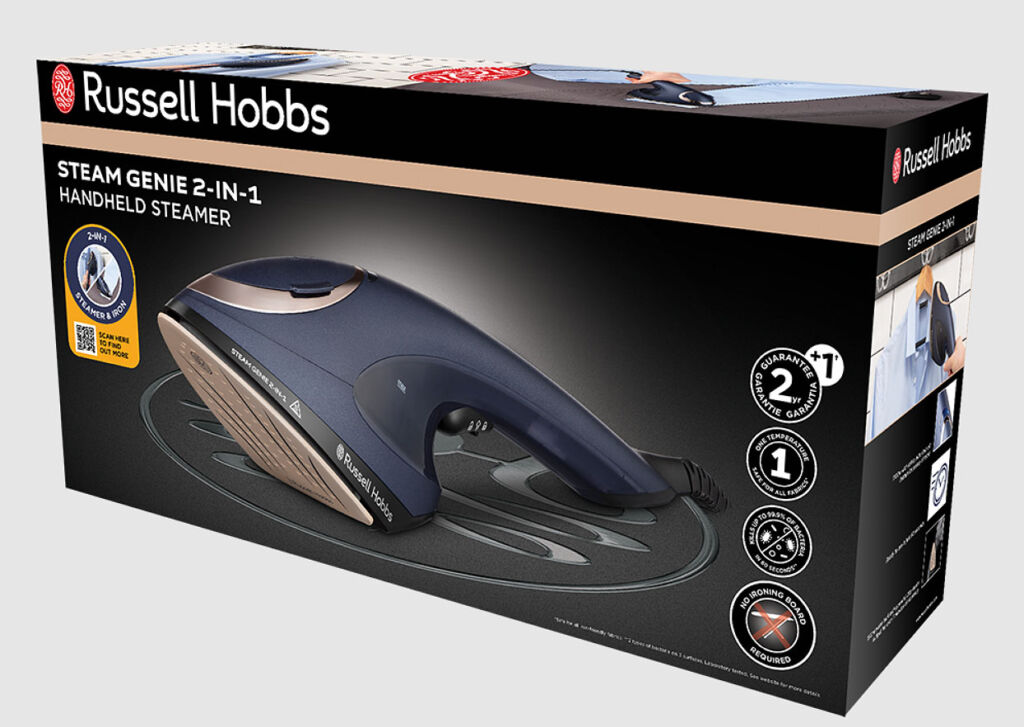 Steam Genie 2-in-1 Handheld Steamer – First impressions
The Steam Genie arrived in a smart-looking box. The first thing that stood out to us on it was the words ‘Up to 3 Years Guarantee, somewhat of a rarity in today’s throwaway culture. 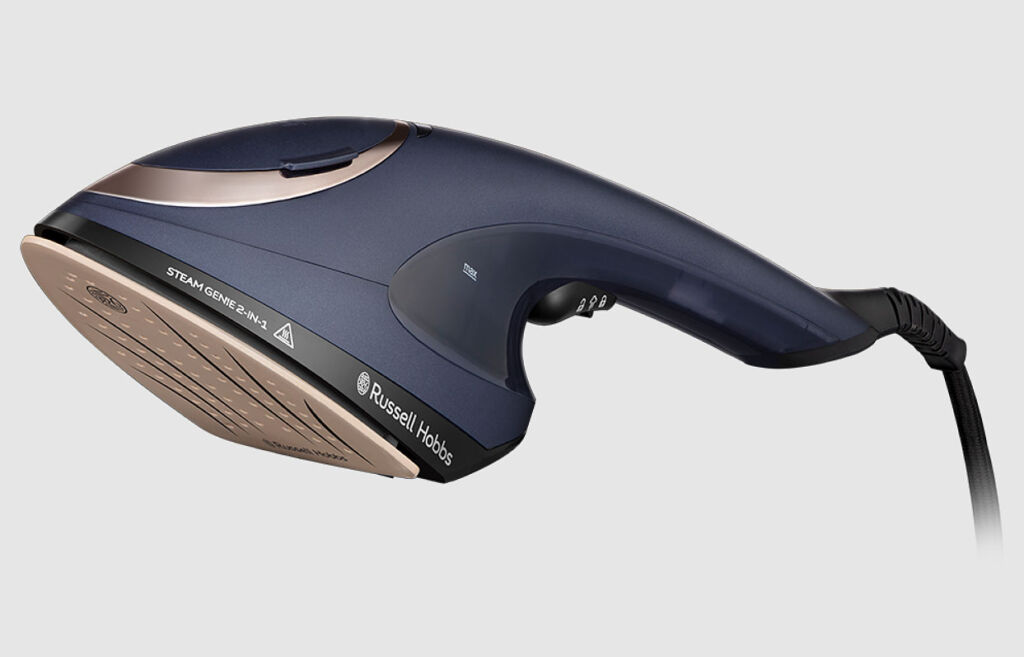 Out of the box, the Steam Genie is a stylish-looking product with attractive curves, a dark purple/blue colour scheme, and silver accents. It comes with a black material bag, which we later discovered is heatproof and is something you can place on suitable surfaces for quick and convenient steam ironing.

Also inside the box were three separate head attachments (see below), each designed specifically for use on differing fabrics. 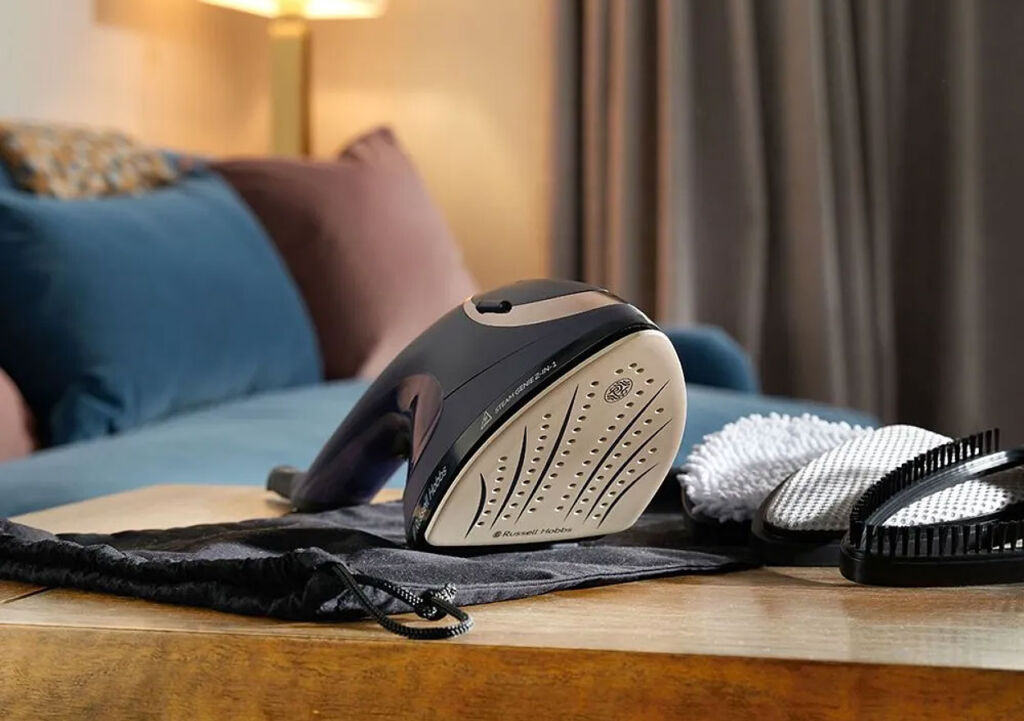 The three head attachments are:

Unlike some other modern-day products, the Steam Genie doesn’t require the brains of a rocket scientist to operate it. Russell Hobbs has designed it to operate under a single temperature, so there is no need to fiddle around with settings. It is also said to be safe for all iron-friendly fabrics, so it is just a case of holding it in the hand and swiping or pressing down on a stable surface.

Once in the hand, the Steam Genie does not feel overly weighty, and for extra convenience, it comes with a three-metre long power cord which was very helpful when performing some of the tests.

Sitting at the top of the Steam Genie is a tank that you fill with water, allowing you to steam for approximately seven minutes. It takes around a minute for the Steam Genie to reach the correct temperature for usage, and for added peace of mind, it also has a built-in auto-shut-off feature. 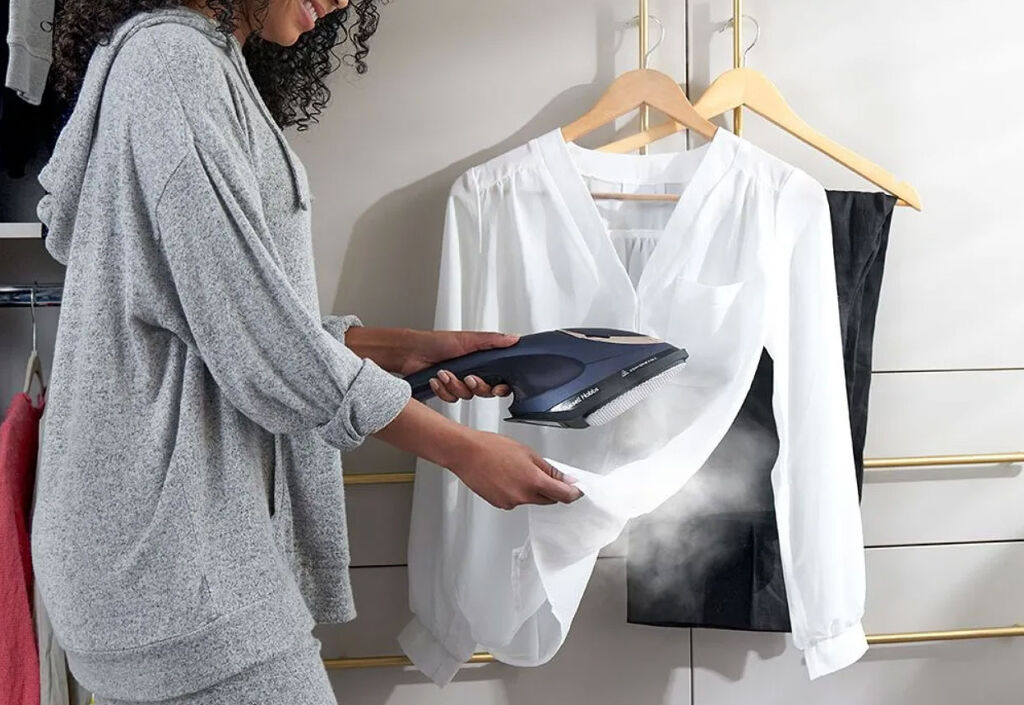 Testing the Steam Genie 2-in-1 Handheld Steamer
For our test, we began with a suit jacket and trousers. During the first minute or so, we didn’t hold out much hope as when we pressed the steam button; we were not engulfed in a huge cloud of vapour. My wife Natasha, the senior tester, said, “Is it working?” Upon closer inspection, it certainly was, as all the creases had disappeared, and it was the same result with the trousers.

Cards on the table, we were both surprised. At this point, I decided to check our digital smart energy meter while Natasha was using it, and it didn’t even register in the charge per minute section. I went back to join my wife and informed her of this and took the opportunity to run my hands over the steamed clothing to feel how wet the garments were; I couldn’t feel any moisture inside or out.

Buoyed by the knowledge that the Steam Genie Handheld Steamer was far more capable than we expected, we tested it on other home fabrics, including hung curtains and a thick king-sized fleece blanket. The results again exceeded our expectations.

Although the curtains were dry to the touch, I wasn’t convinced that the fleece blanket would be dry enough to place back onto one of the beds. I decided to err on the side of caution and hung it in the garden for ten minutes to make sure, and after a good rub of the hand, which I held up in the sunlight, not a glisten of moisture could be seen. 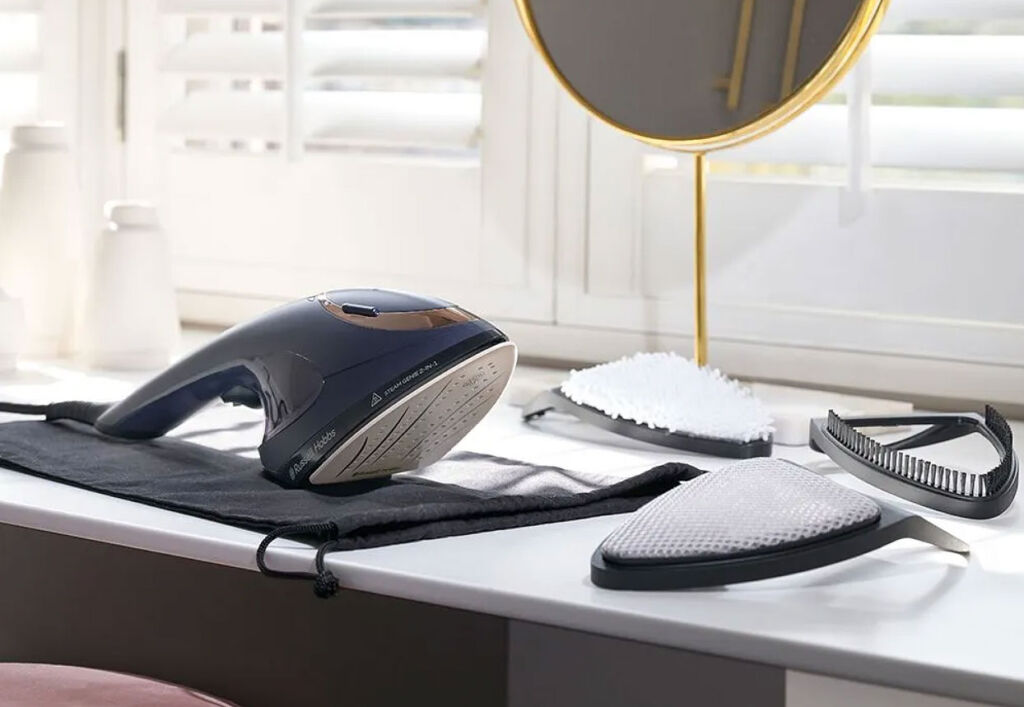 Final thoughts
For pressing and cleaning individual or large items when time is at a premium, Russell Hobb’s Steam Genie 2-in-1 Handheld Steamer is utterly brilliant, and thanks to its flat ceramic plate, it can also double up as a steam iron too.

Seventy years from the day the company was born, Russell Hobbs continues to produce the quality many of us Brits have grown up with, and as I said at the beginning of this review, time is a luxury, and its my opinion that the Steam genie will give those that use one, a little bit more

Russell Hobbs Steam Genie 2-in-1 Handheld Steamer is available to purchase from www.russellhobbs.com and comes with free delivery. When writing this review, their website showed it was sold out, which we feel lends weight to our experience of it. 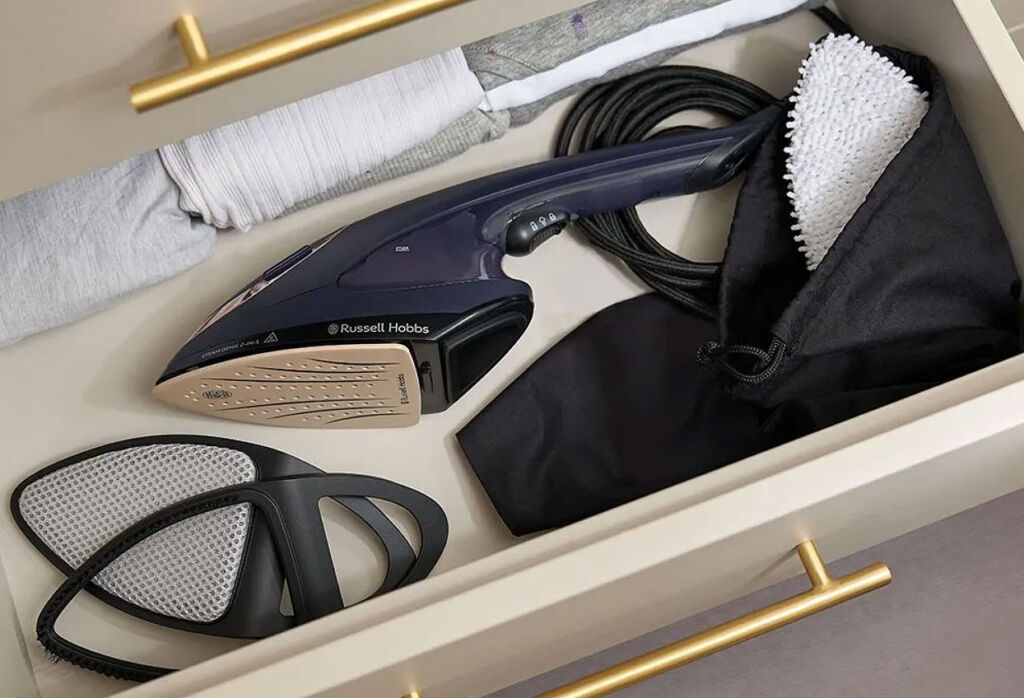