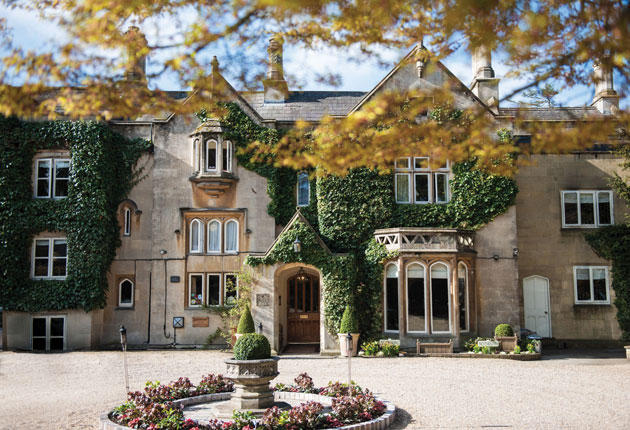 A walk along the crunch of gravel in the courtyard as you mark your entrance into the Georgian stone mansion, tells you that you have arrived in the country. Yet the Bath Priory, an upmarket country-house hotel, is just a stone’s throw away from the city centre. A quick glance around the hotel’s plush lounges, with the sound of clocks ticking and an open fire, told me that I was in for a real treat.

The hotel has 33 rooms but my friend and I stayed in one of their suites. With two bedrooms, a separate bath and double shower and a living room complete with 360 degree courtyard views, our suite named ‘Camden’ looked every inch to one found in a country home style magazine. Each room has been decorated and styled to military precision – fresh flowers, fruit bowl, bottles of still and sparkling water, and even port in a crystal decanter was there to greet us. But first things first. It was time to slip into the fluffy robe and slippers to check out the Garden spa.

In contrast to the rest of the building, the spa has a more contemporary feel. The small heated indoor and outdoor pool is better suited for a relaxing leisurely swim rather than an energetic one. There’s also a fitness suite overlooking the gardens which is equipped with a range of cardio machines and free weights.

All beauty treatments by nature are blissful and give you a sense of real pampering and in my opinion a treatment at the Priory is prerequisite for any stay here. Alongside the classic face and body treatments from Elemis, the spa offers Aboriginal-inspired therapies from Li’Tya, a natural product range from Australia. Intrigued by this I opted to have the ancient Aboriginal Kodo massage literally meaning melody.

The therapist explained that this massage is for the soul, releasing negative energies and replacing it with a positive flow of energy while releasing muscle tension. And unlike traditional massages that start from massaging towards the heart from the outside in, this discipline is done the other way around.

The massage begins with a smoking ceremony with lemon myrtle leaves which is performed to bring the mind into the ‘here and now’. The smell, while strong, seemed to have a calming effect, as my mind indeed stopped wandering about and helped me stay in the room while the therapist worked her magic applying gentle pressure in spiralling motions up and down my body before attending to my face and head.

With my physiological and psychological state attended to, it was time to sit down for some Michelin star cuisine at the hotel’s restaurant. No decision over what to eat at a restaurant like this can be made without an aperitif in one of the lounges. Just walking into the lounge with all its comfy sofa and armchairs, oversized cushions, an open fire and oil paintings adorning the walls, give you a sense of waiting for dinner at Downton Abbey. All that was missing was Roly the Labrador.

The food is certainly ambitious which is what you would expect under head chef Sam Moody. Using ingredients from the hotel’s very own gardens as well as that which has been locally sourced, the food doesn’t get any fresher. And with so many choices on the menu, we opted to sample the tasting menu. We devoured scallops, terrine of duck liver, turbot, beef and brie as part of the menu. How we still managed to eat dessert was a wonder! But with such tantalising mix of flavours and offerings of sorbets and fruity desserts, it was hard to resist.

Just as well the Bath Priory is located just 20 minutes’ walk into the town. After a good night’s sleep on the king size bed and a hearty breakfast with even more delicious food, we decided to take a stroll across the park into town to burn off the food. Bath itself has much to offer thanks to its independent creative, unique and stylish character. It’s no wonder it’s been designated a World Heritage site. A mere 24 hours in the city and this lovely country-hotel was simply not enough and the next time I fancy a trip to somewhere chic in the south-west of England, the Bath Priory will certainly be at the top of my list.

A classic room at the Bath Priory starts from £205 per night. A two course dinner from the a la carte menu costs £62 per person. For more information visit www.thebathpriory.co.uk