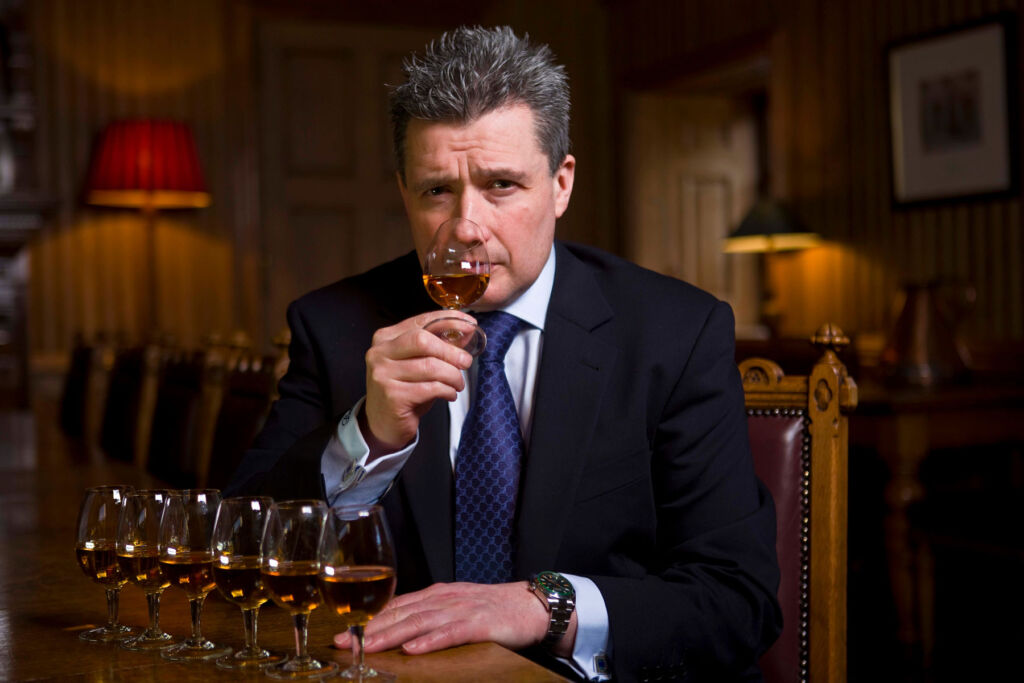 Simon Wittenberg catches up with Royal Salute’s Master Blender Sandy Hyslop to discuss the recent launch of the Royal Salute Forces of Nature by Kate MccGwire Scotch whisky and what the future holds for the brand.

Luxurious Magazine: Congratulations on an exceptional 53 Year Old blend created in collaboration with sculptor Kate MccGwire. What was it like working with Kate, and what are the main synergies between the art of sculpting and the art of blending?
Sandy Hyslop: Working with Kate has been a dream, and I can now consider her to be a good friend since venturing into this project. In terms of synergies, I think there are lots of things, such as attention to detail and the flow of a piece of art. 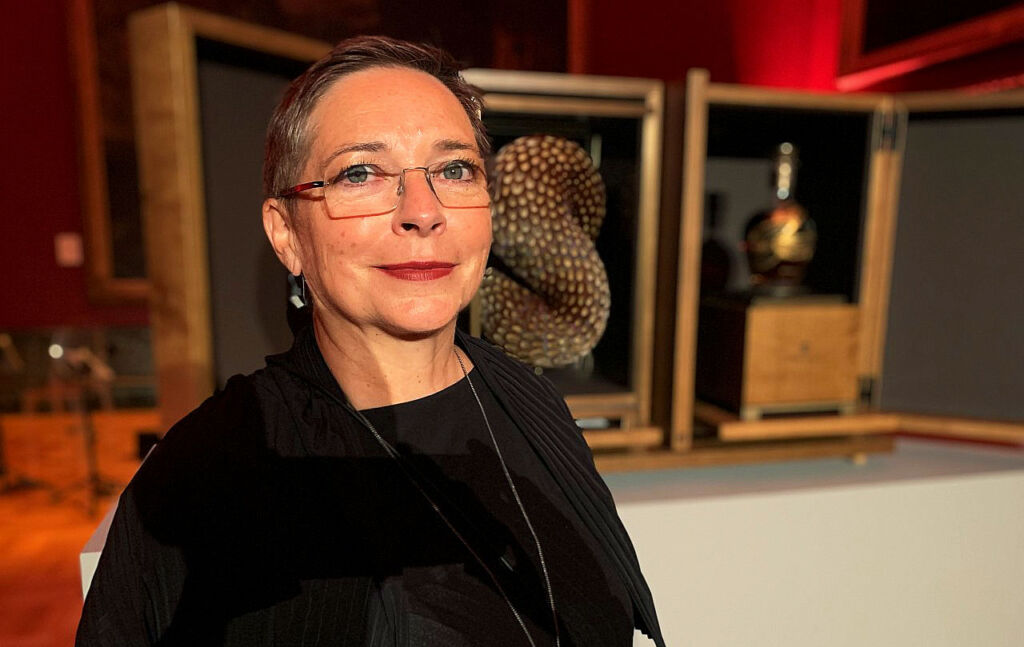 When you look at Kate’s sculpture, it doesn’t just give up everything at once. You also see different things, and that’s a bit like the 53 Year Old blend – it’s really multi-faceted. As you taste it, you’re getting some mango and some sweet strawberry jam coming through, and as this ebbs away, there’s a little bit of orange marmalade, liquorice and cinnamon, and some gentle spice.

I also like the smoothness of Kate’s sculpture and how it’s intertwined. I wanted to achieve the same smooth effect with the whisky, and for it to gently ebb away on the palate, so sub-consciously, you’re not reaching back for the glass to have another sip, thanks to the lingering flavour. One of my priorities when developing the 53 Year Old was for it to have a phenomenal finish. 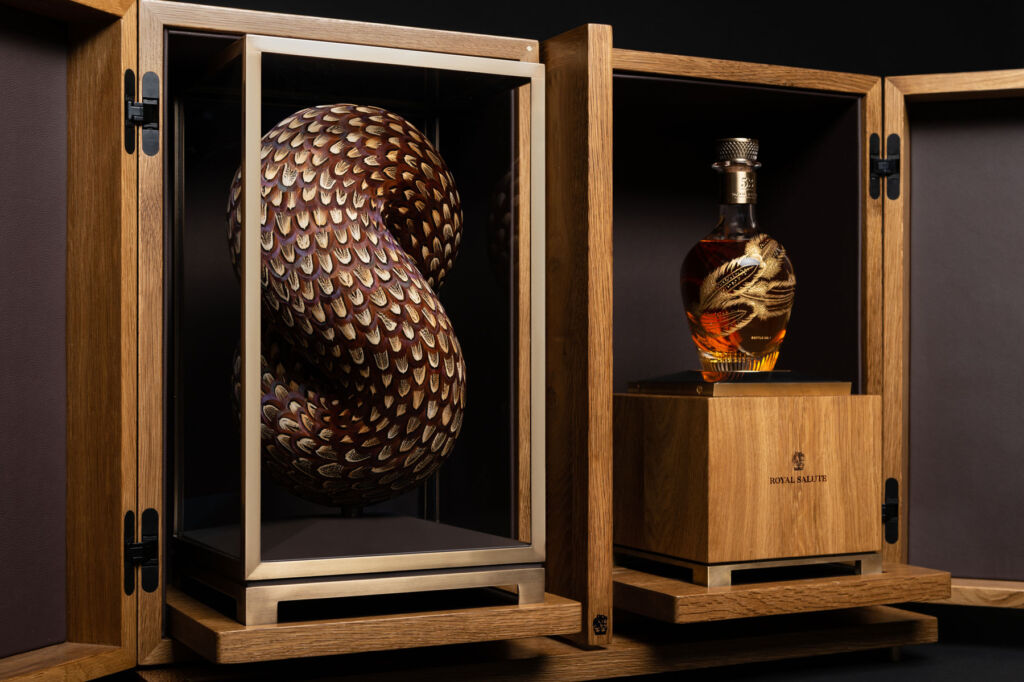 When producing a one-off expression, I don’t have any worries about continuity and having to make it again next year or having to know if I have the right inventory to recreate the same flavours, for example. A one-off expression, therefore, removes the shackles for me to experiment and be creative.

On your second point, there are many different whiskies in this blend. For example, there’s Strathisla in there, which is at the heart of Royal Salute. There’s Longmorn, some Imperial from the long-lost distillery, and there’s some Caperdonich in the expression as well. 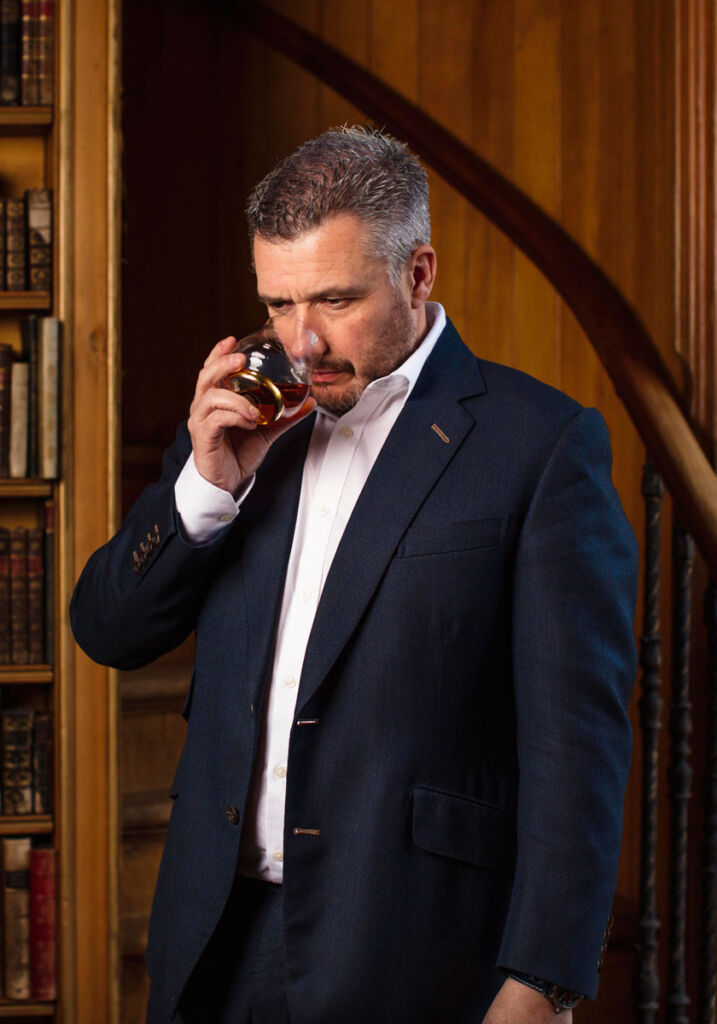 Something as old as 53 years of age is about the casks as well. For a liquid that has been in a cask for that long, the influence of the cask is massive, so that was one of my biggest challenges. In fact, 40% of the flavours come from the distillate, with 60% coming from the cask. At Royal Salute, we are absolute experts at blending and using first and second-fill casks and a bit of third-fill casks as well.

LM: How long did the expression take to create, and was it particularly memorable due to 53 years being a significant number for Royal Salute – the year of Queen Elizabeth II’s coronation?
Sandy: From start to finish, it was probably about 14 months when we started drawing cask samples, bringing them into the Sample Room, and making up the blend in miniature format. I gave my team a formula, and they would take samples and build it up for me on the bench. To be honest, this was a really exciting project, and all the team wanted to be involved in its creation.

There are some whiskies that were all the way up to 56 and 57 years of age, with the minimum age, of course, being 53. When we set up all the samples on the bench, I had to tell people to calm down because all the blenders were jumping in and nosing the samples with incredible reactions. It really was a chance of a lifetime to nose all of these whiskies at once.

In fact, this is a bespoke and handcrafted blend – we made it in the Sample Room and filled the decanters in the Sample Room by hand. We didn’t go near any industrial processes at all. It’s a real professional experiment and a wonderful creation.

LM: We were privileged to see bottle number 12 up at close – one of only 21 in existence. Has number 1 been bought already, or is it heading to the archives?
Sandy: I would assume that number 1 of 21 is going into the Royal Salute archives, so it certainly won’t be in my personal collection!

LM: How do you see the Art of Wonder collection developing following the collaboration with Kate MccGwire?
Sandy: We have set the bar really high, but I think it will be an amazing series. To be able to do this under my tenure as Master Blender for Royal Salute is awesome, and I sometimes have to pinch myself.

I have been with the company for 39 years – I started back in 1983, and if someone had said back then that I would be the Royal Salute Master Blender one day, I would have replied, “yeah, right enough!”. I love the job – there’s always something new to experiment with. I think that Royal Salute is in a real golden period at the moment – with the Polo Editions, and the different cask finishes. 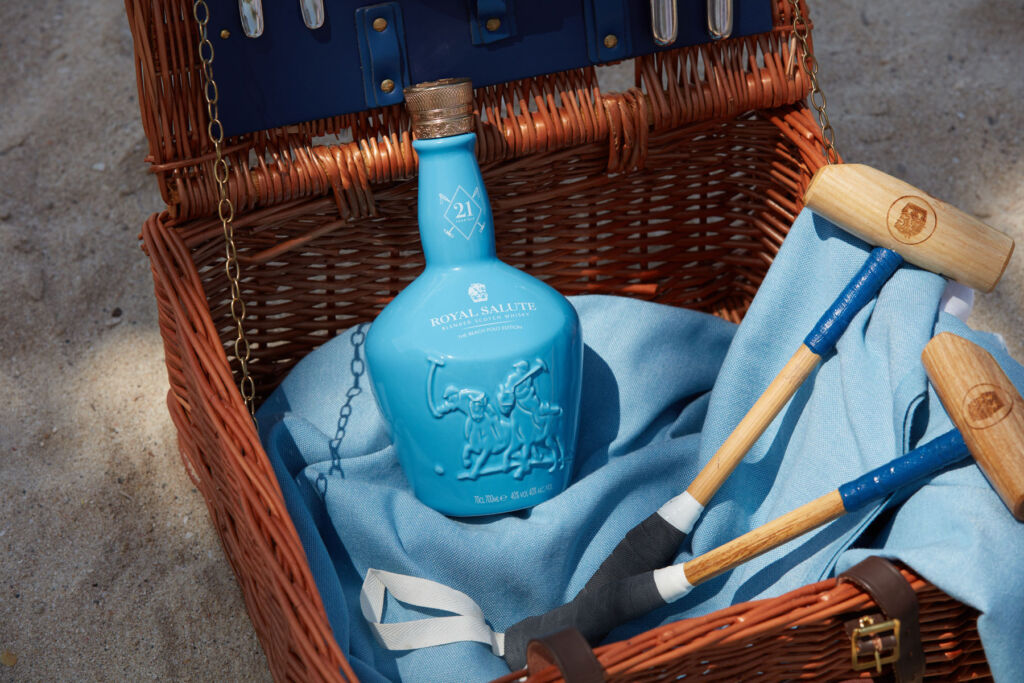 We are bringing in Malbec casks from Argentina and going out to Spain to specify what kinds of oak casks we want. We are not just buying empty casks – we are much further down the whole DNA and how we are going to get the flavour from the end whisky.

For example, the Royal Salute 21 Year Old Signature is an absolute classic – there’s nothing like it, and it’s an amazing whisky.

LM: Do you have a personal interest in art?
Sandy: Very much so. My father is in the antiques trade, so I have been exposed to art and period furniture. I spent my whole youth in his shop, helping to move stuff about.

LM: With another coronation on the horizon – a significant and historic occasion, can we expect something special from Royal Salute to mark it?
Sandy: We are perfectly placed to do something special, and we are looking into it now. We have an unparalleled aged cask whisky inventory. We have a commitment to laying down casks for super long maturations. The biggest challenge is that we have so many amazing whiskies, so deciding which direction to go in and the final choice is the hardest part. I can’t tell you too much at this stage! 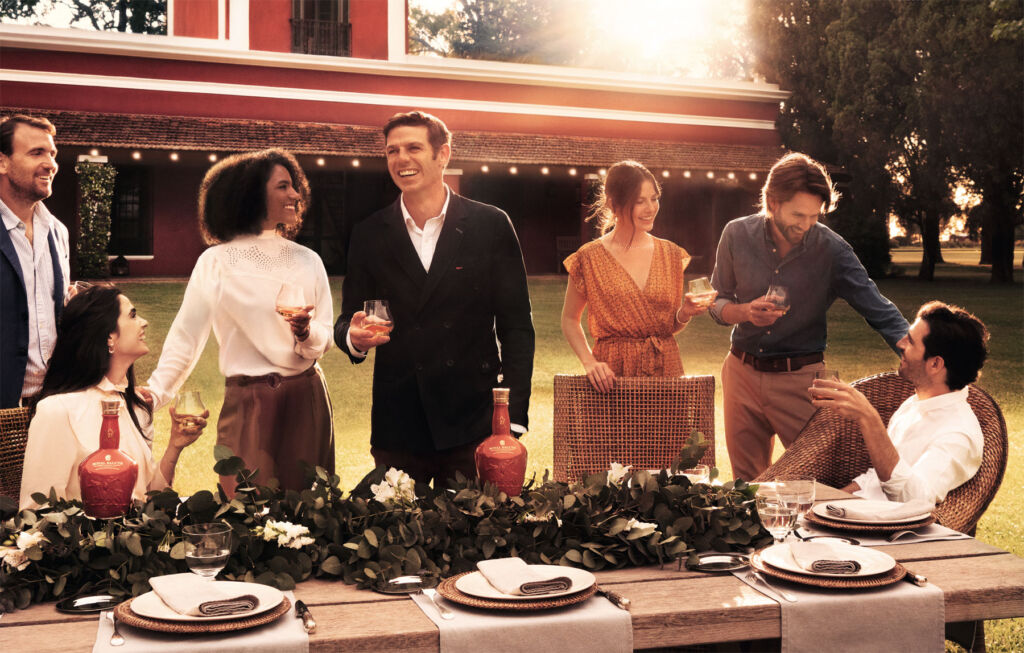 LM: Do you think that the coronation of King Charles III will reset the Royal Salute story in 2023, as everything was based around the last coronation in 1953 up until now?
SH: What a good question, and I hadn’t really thought of that! It may well do. We won’t, of course, forget our long-standing heritage, our foundation and our roots.

LM: Are there any other launches that we can expect to see from Royal Salute in 2023, such as the expansion of the Polo line-up?
Sandy: The next Polo Edition is almost ready, and I am even working on the next one after that! The forthcoming Polo Edition is not as far away as you might think!

LM: And finally, what’s one of the standout items you have picked up recently from a fair or car boot sale, being a collector of items from years gone by?
Sandy: One of the most standout pieces I have bought recently was when I was visiting the Newark International Antiques Fair in Nottinghamshire. I purchased a magnificent piece of Monart – art glass that was made in Perth in the 1940s by the Salvador family. This was a star find!

I love going to auctions, fairs and a Saturday morning car boot sale! A few years ago, I went to a little car boot sale just outside Stirling, and I got a 1930s Montblanc Jumbo fountain pen. It cost £2, and it’s super rare. In fact, just after I bought it, I was walking back to my car, and someone tapped me on the shoulder to ask if I wanted to sell it for £500 – I declined!

Part of the fun of going to these kinds of things is finding treasures. Every time I go to my cabinet, the pen brings back fond memories. It’s a bit like drinking a really good glass of whisky – it takes you to a place and a time, and who you were with.

LM: Thank you for your time, Sandy, and it has been a pleasure speaking to you.

The 21 precious editions of Royal Salute Forces of Nature by Kate MccGwire launched in October 2022 and are available for purchase at selected specialist retailers for an RRP of $90,000. For more information, please visit royalsalute.com or follow @royalsalute on social media.