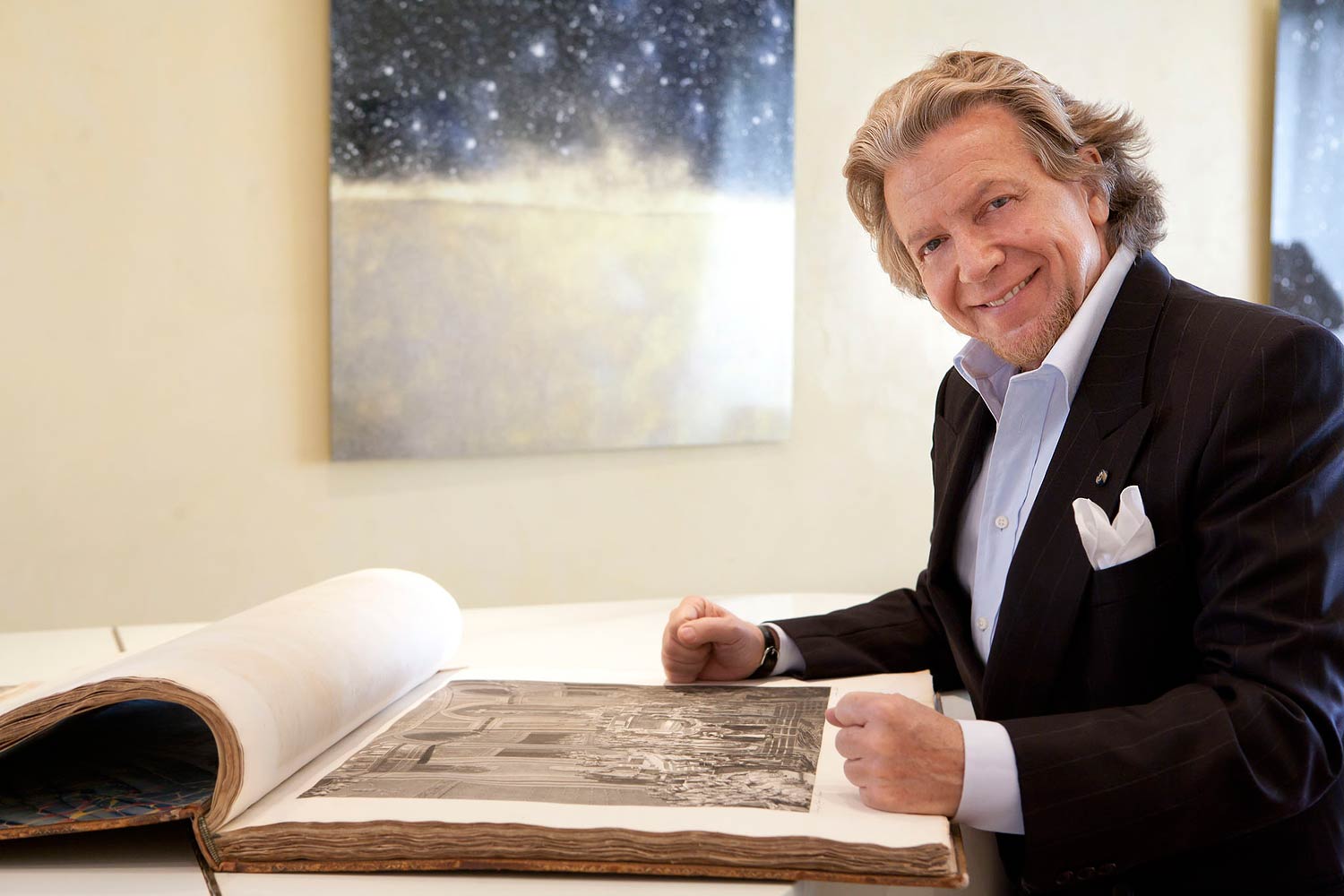 Known as “The Star Maker”, Ottavio Fabbri is what can be considered a complex and versatile contemporary personality.

Painter, sculptor, director, moviemaker, conceptual and visionary Italian artist, Ottavio Fabbri is able to transmit passion and understanding through his interpretations of the night sky. 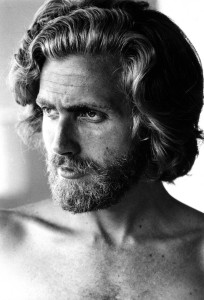 His father, Dino Fabbri, was one of the founders of the famous Fratelli Fabbri Editori publishing house, while his mother, Pierina Tassis, was a painter and art dealer.

With an artistic legacy gained directly from his family, Ottavio Fabbri was regarded as an art critic at just five years old due to his “Absolute Eye”, it takes an prodigal talent to recognize the author of a painting at first glance and distinguish a genuine painting among many bogus ones. This ability is similar to the “Absolute Hear” of some orchestral conductors, with the very best of them recognizing notes without reading sheet music, just by simply hearing them.

His intricate and extremely detailed artworks are so magnificent and evocative that the European Space Agency has conferred onto him a lifetime sponsorship.

Apollo 11 astronaut, Buzz Aldrin, looking at his paintings declared, “I have already seen Fabbri’s paintings in space” and added, “Ottavio is a man and artist of the Italian Renaissance. The new Renaissance, the cosmic one”.

On behalf of Luxurious Magazine, just few weeks ago I had the unique opportunity and honour to meet Ottavio Fabbri for a lunch at his Milan’s home, where I had the pleasure to appreciate first hand many of his masterpieces. A wide and awe-inspiring series of wonderful artworks.

Honesty, humbleness, sympathy and authenticity are characteristics that would not expect in an artist of his calibre. He immediately made me feel at ease.
He often says, “What’s more luxurious than having the sky in your own home?!”

Defined by L’Europeo- as “the Mozart of paintings”, some of his matchless compositions are showcased at the Museum of Modern Art in Colonia and in a wide number of private collections and galleries worldwide.

These are just few of the many reasons why I was so excited to personally meet and interview this international artist.

LM: Thank you very much Ottavio for your kind invitation and for your time. In one of your previous interviews you declared the first word you correctly pronounced, after “Mom and Dad”, was “telescope”. Looking at your paintings, it certainly cannot be a coincidence. Now, after years of deserved success and achievements, how do you explain how that telescope changed your point of view and your life?
OF: I do not know how or why it happened and it remained a mystery to my parents. As a child, probably my intention was to bring the “things in world” closer to me, perhaps I had already heard that word from my uncle, a man truly passionate about astronomy. In any case, the word “telescope” and its meanings have accompanied me for all of my life. 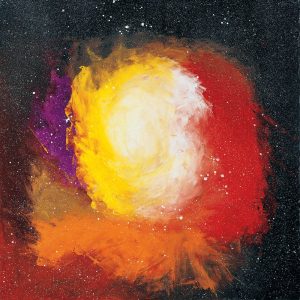 LM: You’ve had the chance to interact with artists that have made history, luminaries such as Dalì, Picasso and other icons of the global art scene. Is there a painter or an artist in general from whom you think you have learned something more? Someone who has left a mark on you?
OF: Among all the great artists, two from the past impressed me the most: Leonardo da Vinci, who went beyond the light and Michelangelo, who went beyond the matter. Both reached the soul of things, that is the maximum inspiration of every artist.

LM: Your art is not only expressed with painting, but also through sculpture, music, movies and more. For this reason, some of the most important art critics worldwide consider you as the artist of the new renaissance. Is this the way you would like one day to be remembered?
OF: Well, honestly I do not know. The truth is that my highest aspiration would be to not die…

LM: The Renaissance is commonly viewed as the end of the Middle-Ages, paving the way to the beginning of the Modern Age. As a man of the new renaissance, what do you imagine art will be in the next 50 years? Do you think there is still something to “invent”?
OF: Humans have spoken and expressed themselves through art for millions of years. Art is simply the placement of themselves in front of the world and vice versa. The most precious breathe of the humanity that seeks to express itself…questioning about life’s mysterious and unpredictable journey.

LM: Sometimes people imagine that artists of your level have “strange” attitudes or habits. I mean, some artists create only if they are alone, others listen to classical music, and some might choose to smoke a particular cigar. Is there anything that you feel you do to help your creativity? Something you would like to reveal to our readers? 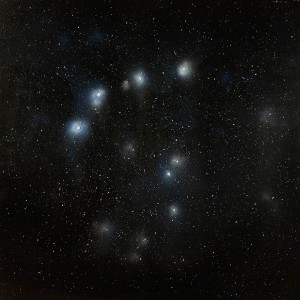 OF: To be honest I do not think I do anything strange or out of the ordinary. Sometimes I invent funny stories or jokes that I tell to my friends. After some time I happen to hear the same jokes from someone else and I am obliged to laugh.

LM: You said that the stars are a patrimony of all humanity, because by simply raising one’s eyes to the sky anyone can appreciate their beauty. In this respect, painting stars and constellations could be considered as a great responsibility. While you are painting, do you ever think about what people will say of the artwork you are creating?
OF: When I paint, write or when I am focused on expressive activities in general, I do not think of those who will judge my work. I simply wonder if I will like it once completed.

LM: From as far back as the early 80s, you’ve produced a stunning series of paintings. What is the artwork, or the series of artworks that you feel represents you the most? Moreover, is there a painting that will become part of the heritage of your family?
OF: I have never thought about it. They will decide what they like best… Difficult to say now, you know, I could even create my best painting tomorrow…(smile)

LM: You travel a lot to personally manage your projects, so I suppose it is often difficult to bring brushes and canvasses with you… What do you do if you have a moment of inspiration but you do not have the opportunity to work on it right away?
OF: Sometimes I happen to have inspiration when I am somewhere around the globe, it’s true, but there is nothing I can do. I have to simply wait for the next stop! 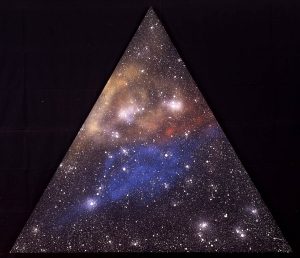 LM: Although painting is your first and greatest love, your artistic cornucopia of skills is truly rich. From the creation of the “Pyramid of Light” in Egypt to the latest women’s fashion brand called “Stars & Stars”. How do you manage all these different types of activities? …and what is the one that you find yourself concentrating on most?
OF: I always try to find the time to invent something new. I have also patented an anti-aging cream based on the preservation of the beauty of some ancient Egyptian women. Furthermore, I sleep just few hours per night so I have almost twice the amount of time compared to normal people to think and invent. In this current period, I’m working on new concepts and projects for Expo 2020 Dubai.

LM: Among other things, Architectural Digest described you as “a passionate visionary, one of those men who have big dreams and are able to achieve them”. Have you ever thought “This time it’s really hard”?
OF: I never consider my visions or projects impossible because, one day, they will surely be created.

LM: Looking back to the past… Is there something that Ottavio Fabbri has yet to do in life? Is there something you have never had the opportunity or time to do?
OF: Until now, I have traveled in the cosmic space of my paintings, between matter and anti-matter. I have always dreamed of traveling through time … I am still working on it…(smile) 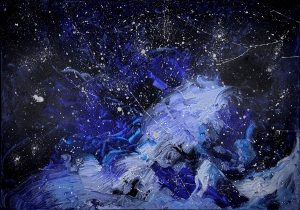 LM: Ottavio, we are at the end of our interview. Is there something you would like to say or add to our readers?
OF: I really thank you and Luxurious Magazine for your kind attention to my artworks. In my opinion, one of the greatest luxuries in the world is to bring the sky closer to all of us and enclose the stars in a room…that is what I have done with my paintings.

LM: Ottavio, thank you very much again for your kindness and for your time. It’s been a pleasure for me to meet you and to have the opportunity to appreciate your astonishing masterpieces in person.

I see around me unique pieces of art. Stars, constellations, deep skies and other artwork series like “String Theory” that really impress me, so I completely agree with you when you say that one of the most luxurious things in life is to have the sky in your home.

To see the latest masterpieces and projects created by Ottavio Fabbri, visit:
https://www.instagram.com/accounts/login/