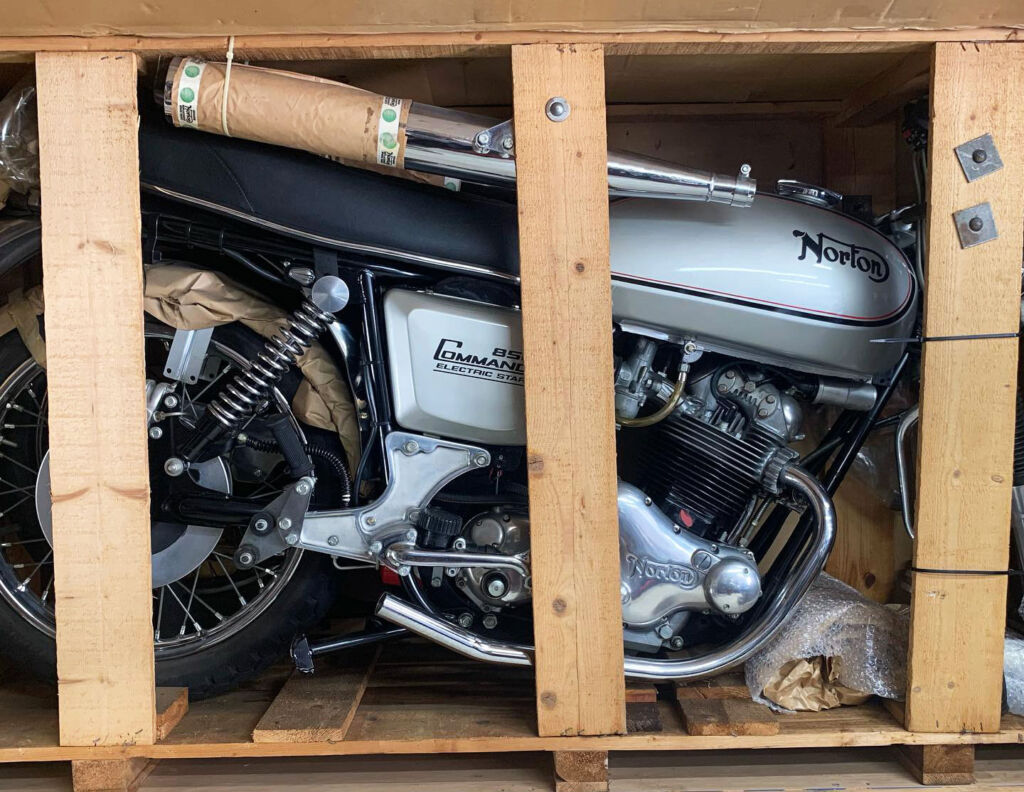 Bikes fans should be very excited by the news that a still crated Norton Commando 850 from 1977 is coming to auction. The pristine Norton will be available to the highest bidder at the H&H Classics auction at the National Motorcycle Museum in November.

As an avid toy collector, I get excited when I find a toy that hadn’t been opened since the seventies, but a motorcycle? That’s almost unheard of! For motorcycle fans, this is an incredible opportunity to own what may very well be the only brand new Norton Commando 850 in the world.

The Norton Commando 850 is still in the original manufacturers shipping crate and is up at auction on November 14th. The estimate is £20-£30,000 but is highly likely to go past that. After all, will an opportunity like this ever come up in the lifetime of anyone reading this?

The story behind this Norton Commando 850
The Norton Commando 850 was shipped over to Belgium in 1977 where it sat untouched. From here it was sent to Holland and then found its way to Spain courtesy of three owners in 43 years. What’s absolutely amazing is that none of them wanted to unpack it preferring to just look at it in its original packaging and imagining what it would be like on the open roads. 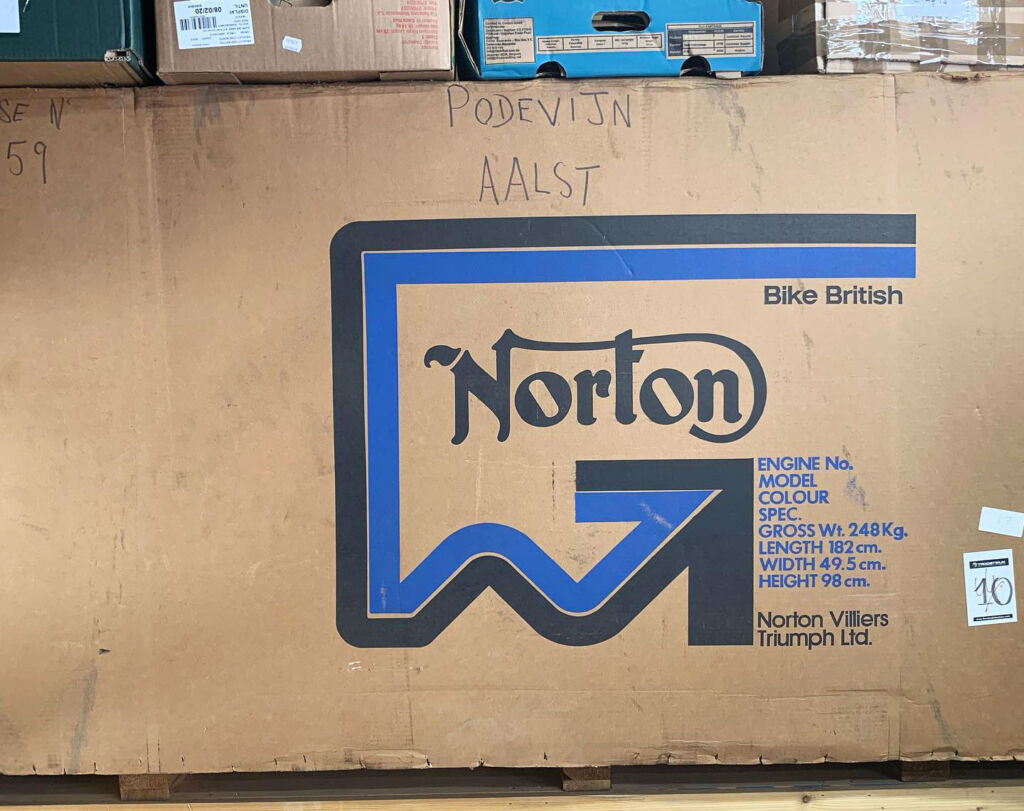 I get it; As I mentioned earlier, I am an avid collector of antique toys and a good number of them have never been opened. It doesn’t matter how many of my friends tell me it was their favourite thing in their childhoods, they stay there sealed in their original packaging.

It’s a hard to describe feeling knowing that you have something from decades ago that is untouched and pristine. It seems almost sacrilegious to open something knowing it might be the only untouched example left in the world. But, unopened vintage toys, although difficult, are not impossible to find. An unopened classic British motorcycle, that’s a different kettle of fish altogether.

Currently this incredible motorcycle us in the hands of Kevin Maddocks who’s been a fan of Norton the whole of his life. He said: “It was in the mid 60’s that my’ love affair’ with Norton began. I’d owned plenty of bikes including Matchless, AJS, BSA, Velocette, Royal Enfield, Triumph, but the one bike that took my breath away was the Norton 750 Atlas.”

“The Atlas, in beautiful red with lots of chrome swept me off my feet and after several years of saving on apprenticeship money, I forked out very willingly. At last, she was mine and boy did we have some fun! She was fast, reliable, stood out at bike meets and a pleasure to ride. We went all over England and Europe.”

“I have since owned many bikes and currently ride a 2014 Norton 961 Cafe Racer and the New Triumph Rocket 3. Although the latter is probably the most powerful bike in the world, I still get so much more pleasure riding my Norton. It has so much character and class and always draws a big crowd; she makes me very proud!”

“Imagine how excited I was when I recently heard of a 1977 Norton Commando 850 Interstate that was still in its original packing case – 43 years old and still ‘brand new’. I just had to buy it, and I tracked down the owner in Spain. The Spanish collector, who owned 98 bikes, had bought it ten years earlier at an auction in Belgium after the owner of a Belgian motorbike shop passed away. He had kept it in his storeroom, in its original packing case, for about 35 years and for some strange reason refused to sell it to anyone!”

“Since owning her I have never really touched her – she would look even better if I could give it a spring clean but to do it properly, I’d have to remove her from the packing case. Everything is there; three sets of keys, manufacturer’s advice sheets for the dealer, owners manual, service book, plus even a small spray can of Norton chain lube! (Possibly the only one in existence?)”

“My intention was to display her this year at many of the big bike shows and lend her to museums from time to time. Covid-19 stopped me doing that this year and I have since decided to move to Spain permanently. Therefore, I cannot do any of this properly from Spain, so I reluctantly have to sell. I hope she ends up in a good home and the lucky custodian keeps her another 43 years!”

For more information on the auction of the unopened 1977 Norton Commando 850, visit the H&H Classics website www.handh.co.uk.