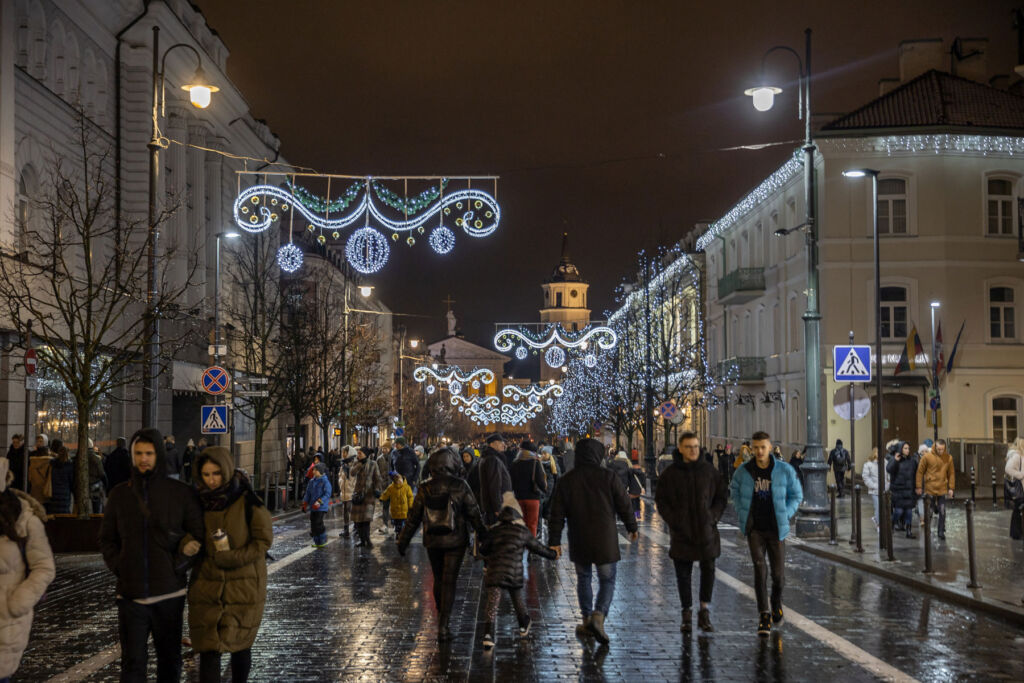 With the holiday season rapidly approaching, anticipation is building for what Vilnius, the capital of Lithuania, has in store for 2022. The city’s Christmas tree designs are always something to behold and contain an impressive confluence of technological innovation and respect for heritage. This feature looks at some of the most spectacular displays from recent years.

The Christmas trees in Vilnius, Lithuania’s capital, have long been regarded as some of the most beautiful in the world and have influenced decorating trends worldwide. Usually, instead of a real tree imported from a forest to decorate Vilnius Cathedral Square, sustainable spruce branches, metal structures, garlands, mirrors, and various other means are used to create a magical, fairytale-like space, which is connected by a tree-like installation. 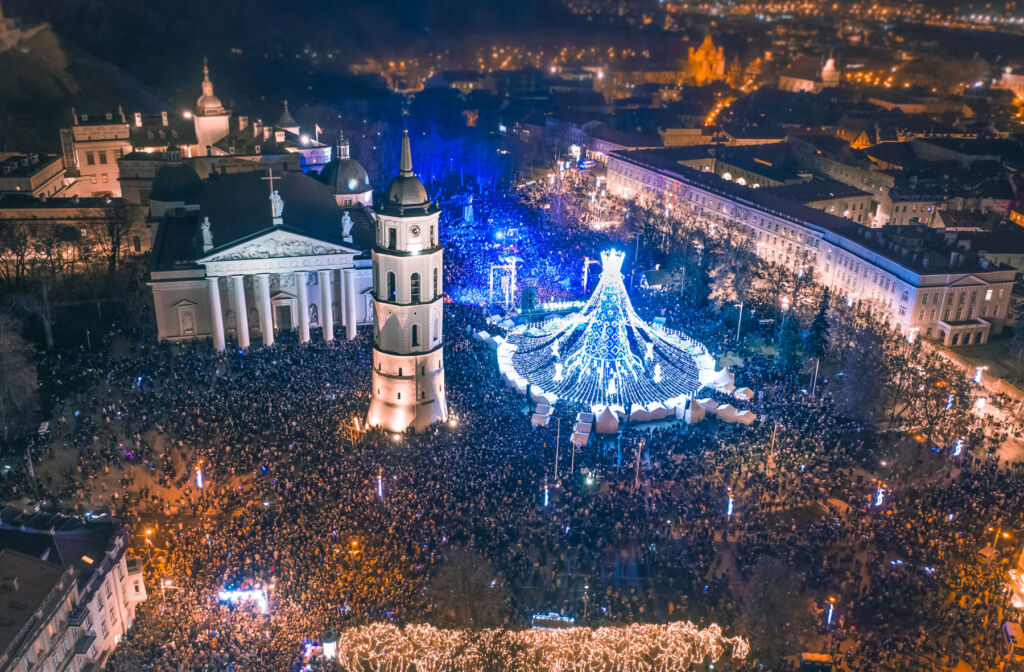 As was tradition up to a few years ago, Vilnius displayed a traditional Christmas tree in the heart of the city — the Cathedral square, next to the Bell Tower, built on one of the oldest buildings from the XIII century. In the previous decade, however, the city took a step to create something bigger: a gigantic art installation replaced the classic tree.

As this year’s holiday season is fastly approaching, here is an overview of the capital’s iconic trees throughout the years. 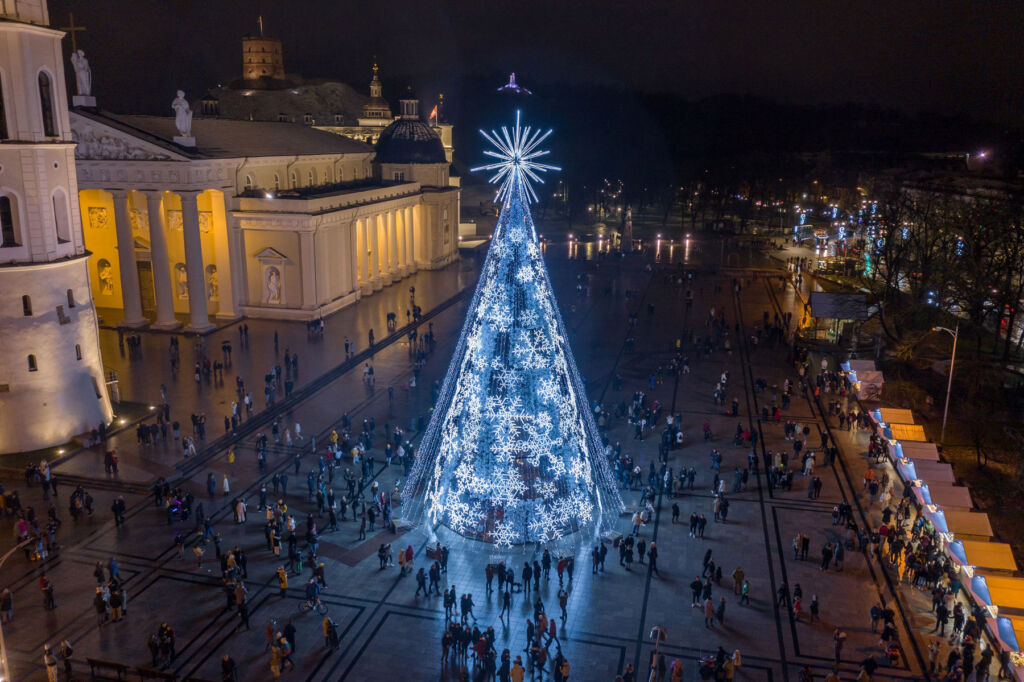 The twinkle of a white Christmas.
In 2021, the Vilnius Christmas tree came to represent a soft-white winter and a dazzling Christmas, with the elegance of wintertime nature and the shapes of actual snowflakes serving as inspiration for its creation. Ninety-six snowflakes and white spruces of various sizes and designs, magnified more than 1,000 times, were used to ornament the tree. 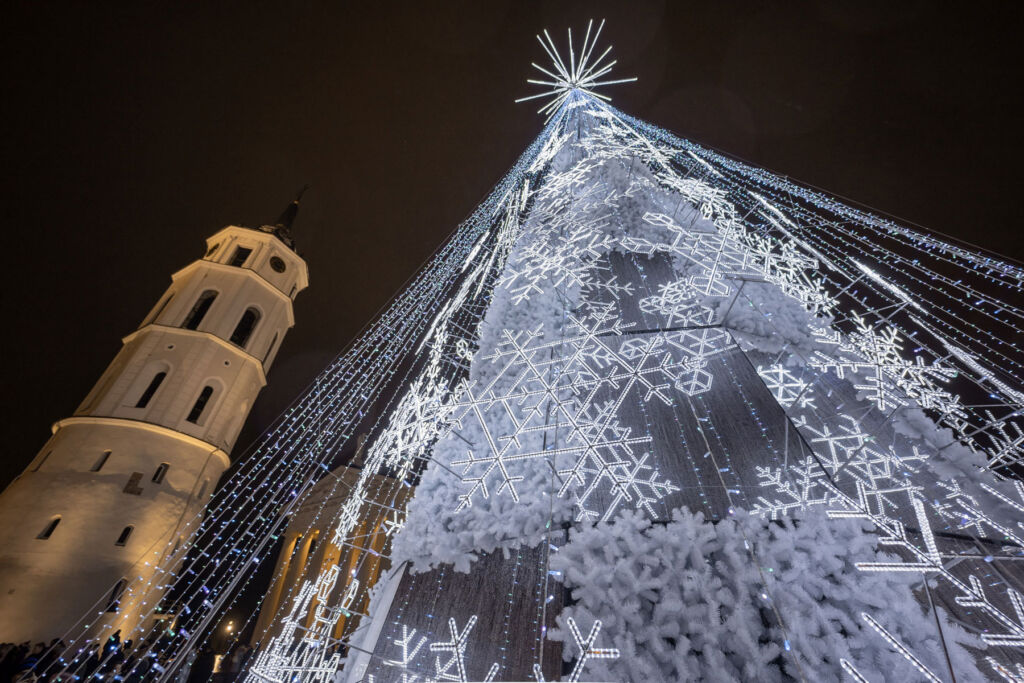 A veil of dazzling garlands and 200 square meters of enormous mirror surfaces produced the illusion of glistening snow. The summit was illuminated with a Christmas star with an impressive diameter of 6 meters. 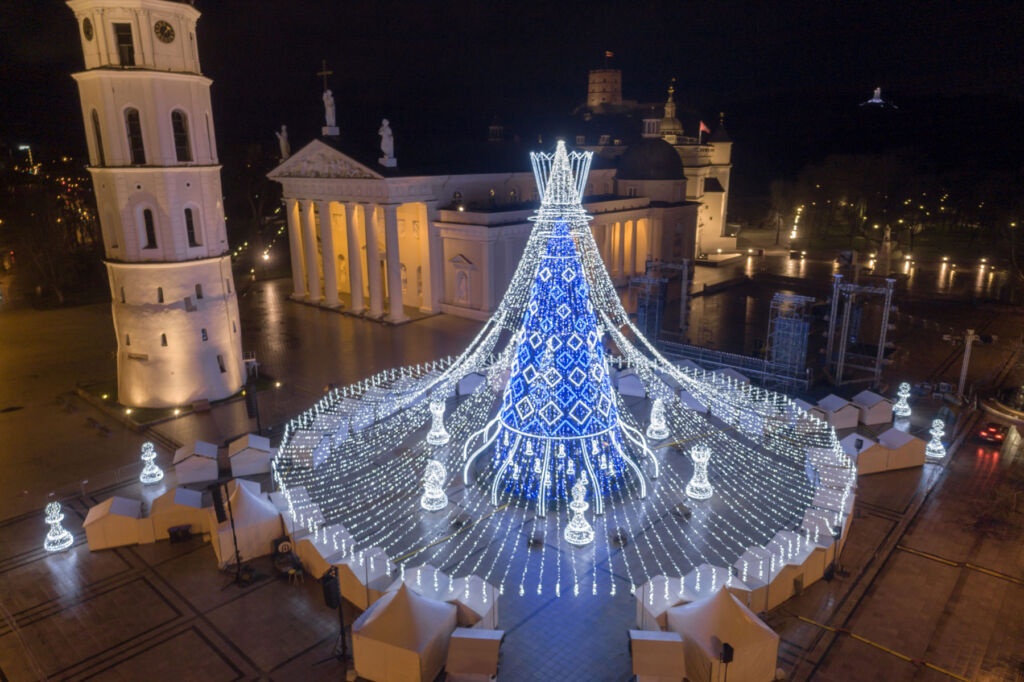 The Queen overlooking Vilnius.
In 2019, the symbol of Christmas in Vilnius transformed into the most powerful chess piece – the Queen. The chess-themed tree featured elements of the popular fabrics from the time of Queen Bona Sforza in Vilnius and was decorated as a queen in a royal blue dress and silver cloak made from over 100,000 lights. 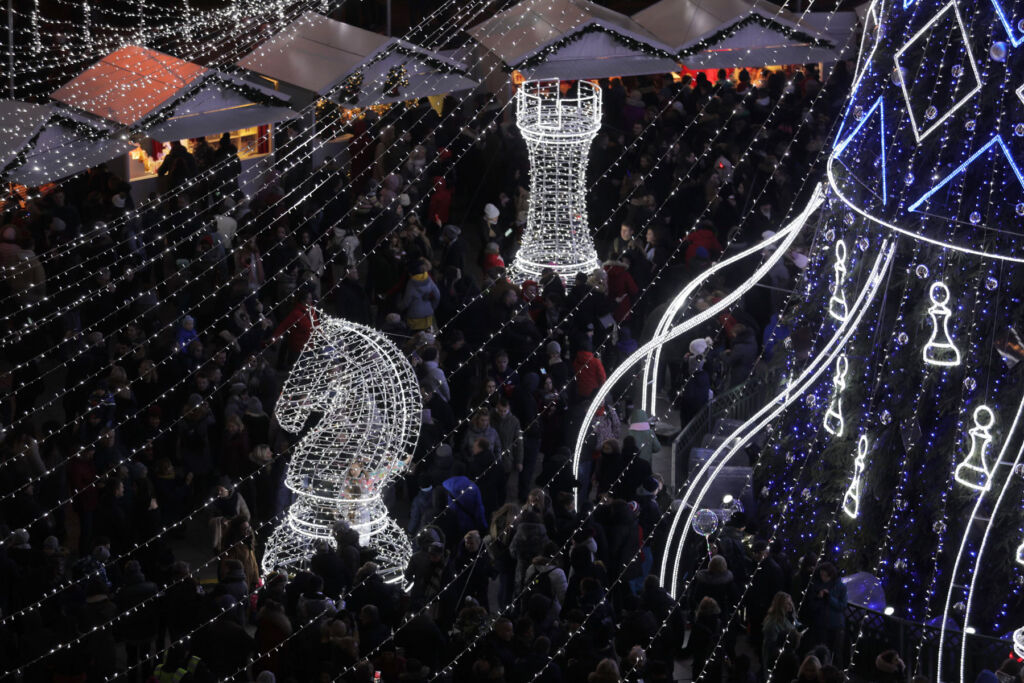 During excavations, archaeologists found a wooden chess piece on the Grand Dukes of Lithuania’s palace grounds; it was an ornate Queen’s piece. The chess piece became the main inspiration for this year’s Christmas tree in Cathedral Square. The European Best Destinations portal voted it the most beautiful Christmas tree in Europe. 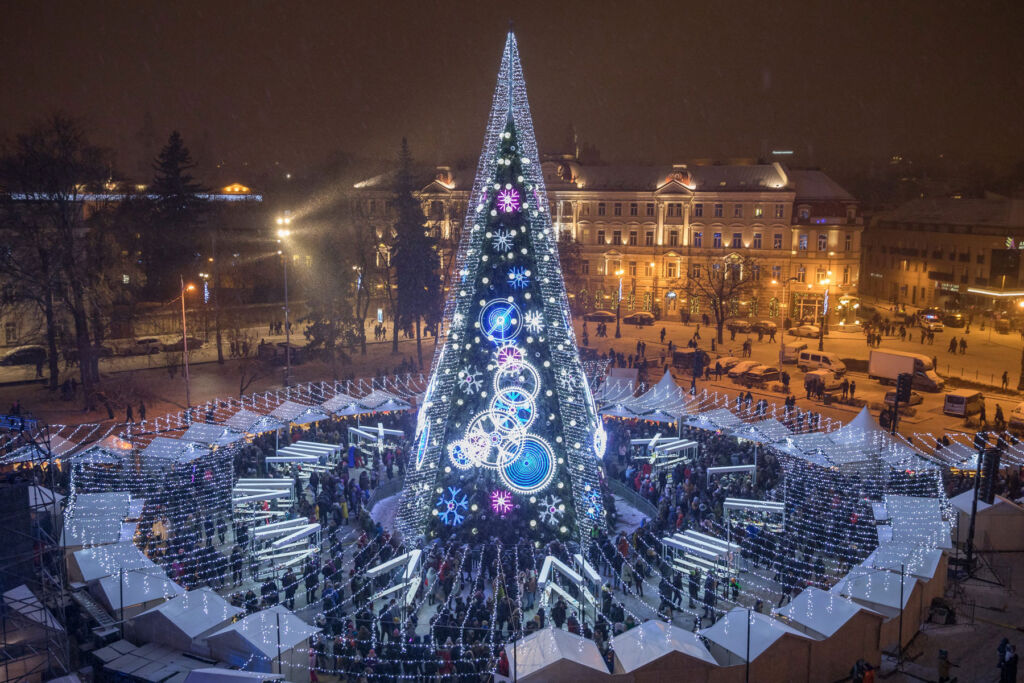 Time for celebration.
In 2018, the Vilnius Christmas tree was a stunning and original artistic composition called Time. Standing in the centre of Christmas Town, the spectacular 27-meter-tall Christmas tree was covered with 6,000 branches, which created the shape of a stylized clock — in tune with the Cathedral’s bell tower clock. It acted as a reminder of the passage of time. 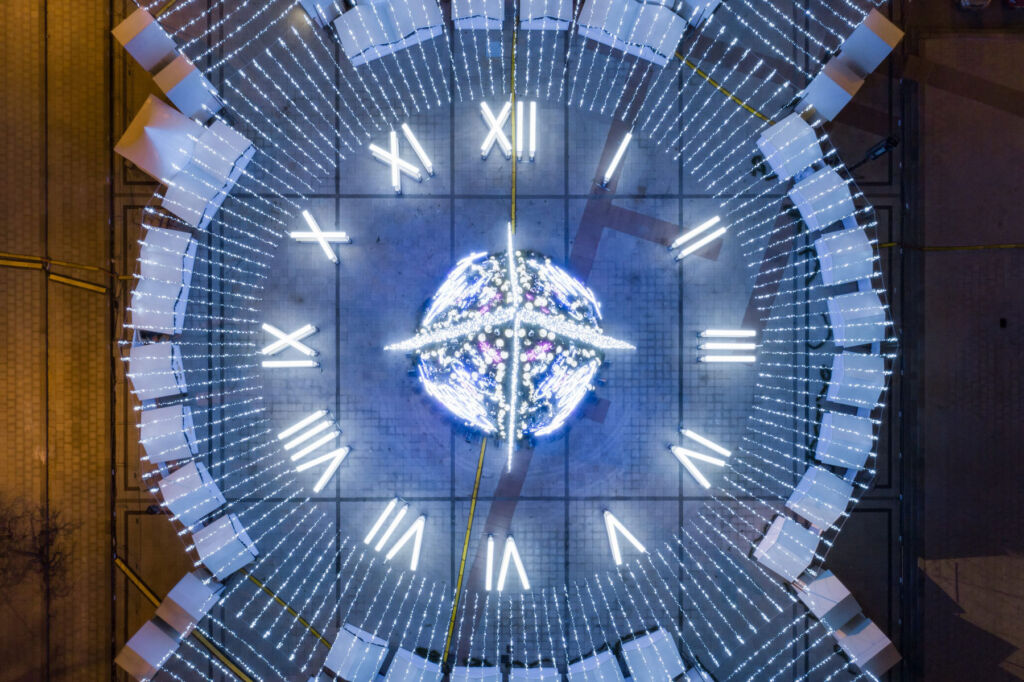 The city decorated the tree with dynamic clock gear snowflakes that pulsed at the rate of the corresponding clock gear, stopping briefly every 15 minutes, while the Christmas tree itself flashed every hour for as many times as there were hours. The Time tree was even ranked among the world’s top ten most beautiful trees by Euronews. 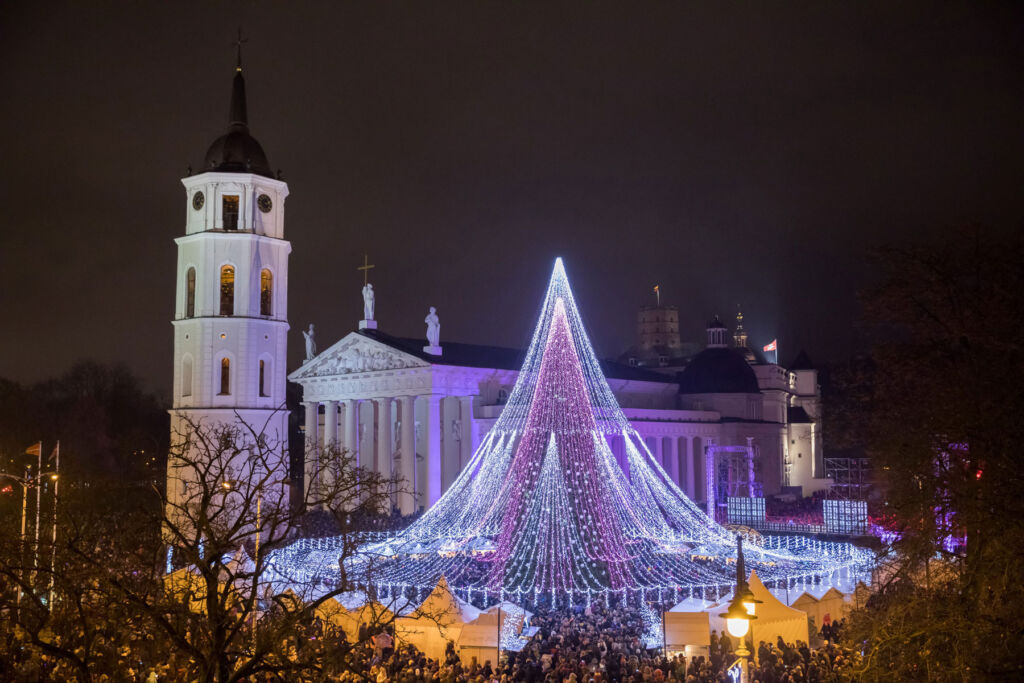 Hidden in a purple shroud.
In 2017, the 27-meter-tall purple Christmas tree once more shrouded the Christmas town in glistening splendour and was praised by all who saw it. The tree’s creators left behind the Christmas tree veil that wowed everyone in 2016, but this time its patterns resembled a giant snowflake whose full beauty unfolded when seen from above. 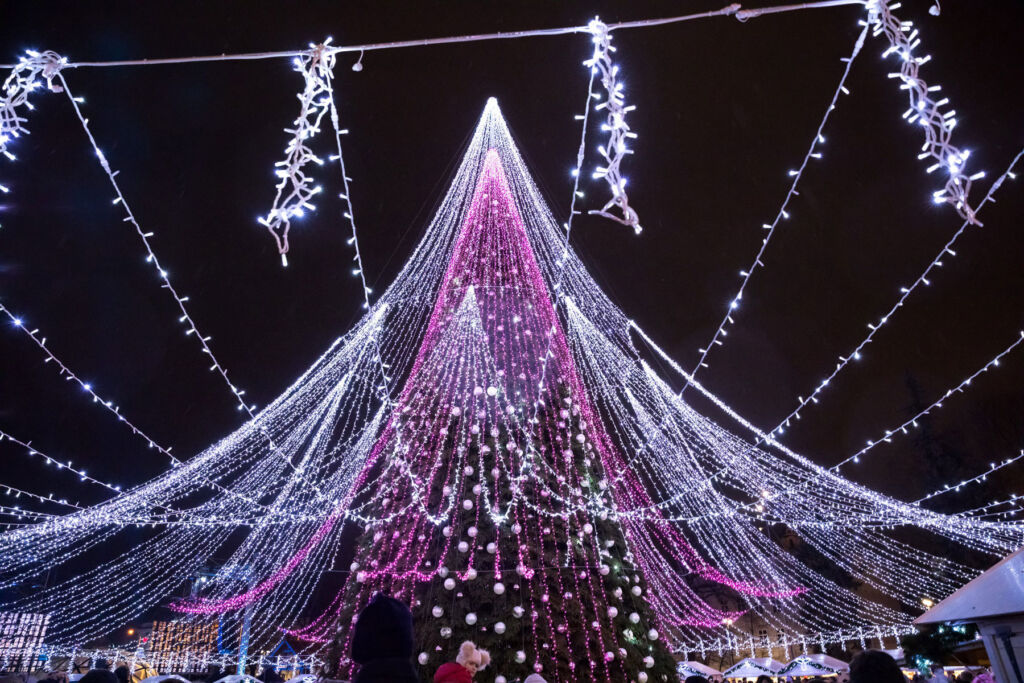 The impressive structure contained 70,000 light bulbs and 900 Christmas toys and was so luminous it was seen from an aeroplane as it approached Vilnius Airport. The purple colour of the spruce, rarely used in Christmas decorations, was regarded as a bold design decision. And to cap the year off in fine form, the Vilnius tree was voted the most beautiful in Europe. 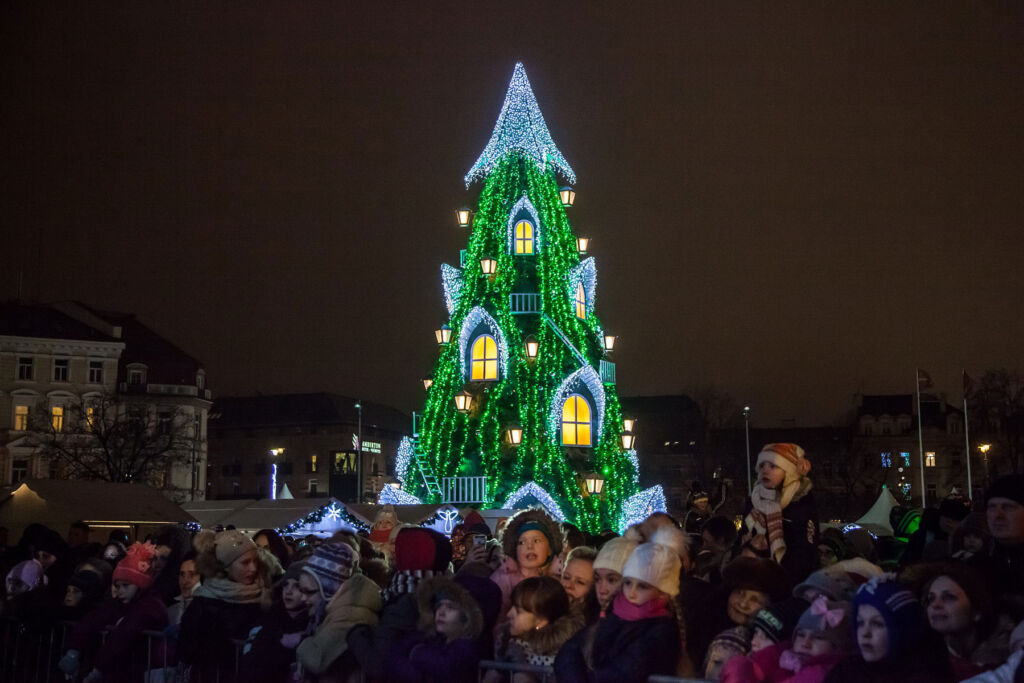 A fairytale inside the tree.
Vilnius’ Christmas tree in 2015 was a real fairytale house, where famous people, including Lithuanian President Dalia Grybauskaite and Vilnius’ Mayor Remigijus Šimašius, read fairy tales and excerpts of literary works to children.

The installation invited people to remember their childhood and imagine a cosy fairytale house. The snow-covered roofs, the warm lanterns, the inviting light coming through the windows, and even the balcony reflected the idea that the world is one house. 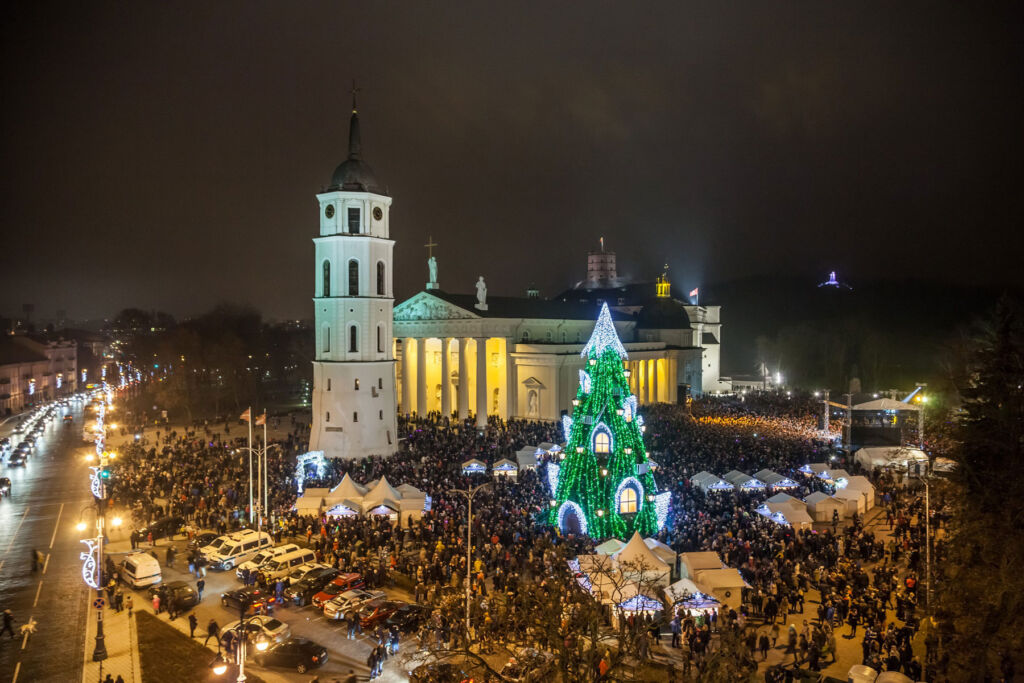 The Guardian and The Huffington Post listed the 25-meter Vilnius spruce as one of the world’s most beautiful trees. The following year, Christmas markets around the world were inspired by the idea of the spruce.

For more information on what Vilnius has lined up for the festive season, visit www.govilnius.lt. 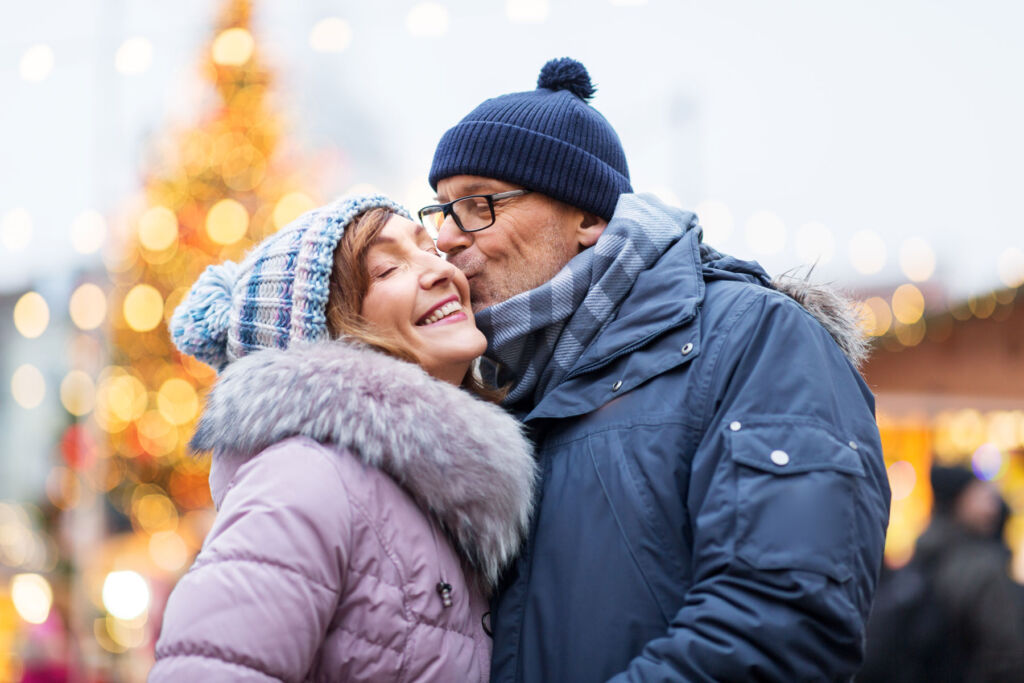