Imagine renting the very apartment that former British Prime Minister, Sir Winston Churchill, lived and entertained in during his youth. This stylish two-bedroom flat in Mayfair’s Mount Street can be yours for just £1,550 a week and is let fully furnished.

The ultimate in Churchill memorabilia, Sir Winston Churchill’s former home at 105 Mount Street is ironically located above a cigar shop.

The young Churchill – then in his mid-20s – rented the Mayfair pad from his wealthy cousin Charles ‘Sunny’ Spencer-Churchill, the 9th Duke of Marlborough.

Located within a grand terracotta mansion block designed by architects Sir Ernest George & Harold Peto in 1888, the apartment provided a base for Winston Churchill as he launched his political career. Churchill was living at this Mayfair address when he was first elected to the Houses of Parliament as a Conservative candidate for Oldham in 1900, eventually going on to become British Prime Minister in 1940 during the Second World War.

Sir Winston Churchill lived at 105 Mount Street from 1900 until 1905, he was aged 26 when he first moved in and he left at the age of 31, moving to a larger home on Bolton Street. During this period, he entertained political friends and family members at the apartment, with the home furnished by his maternal aunt Leonie Blanche Jerome. Whilst he was at his Mount Street abode, he wrote his resignation letter when he dramatically defected to the Liberal party in 1904.

The nearby luxury hotel, The Connaught, then known as The Coburg, would deliver meals to the nearby residences and one of the people regularly ordering luxury takeaways from The Coburg was the young Churchill, with meals and refreshments from the adjacent hotel, brought up to his pad at 105 Mount Street. It is believed that the luxuries of The Coburg helped to give Churchill his lifelong love of champagne, fine cigars and good food.

Churchill’s bachelor pad in Mayfair is much changed since his days and has recently been refurbished to a high specification throughout and finished in a chic contemporary design. As in Churchill’s day, the second-floor apartment is a typical ‘entry flat’ for young people wanting to live and start out in Mayfair, just at it served this role for the young Winston. The ground floor of the property is now home to a cigar shop which features product displays and memorabilia in homage to Sir Winston Churchill, with the apartments above offering elegant homes with modern amenities.

The lateral apartment provides a Principal suite overlooking Mount Street, with a further guest double bedroom. The reception room is stylishly dressed in monochromatic fabrics, with plush seating and a marble fireplace. The room has plenty of natural light from six windows which overlook Mount Street, with a smart dining table in the corner.

The bespoke kitchen is fitted with integrated Miele appliances and mirrored splashbacks, all finished in a cream hue for a bright and fresh feel. 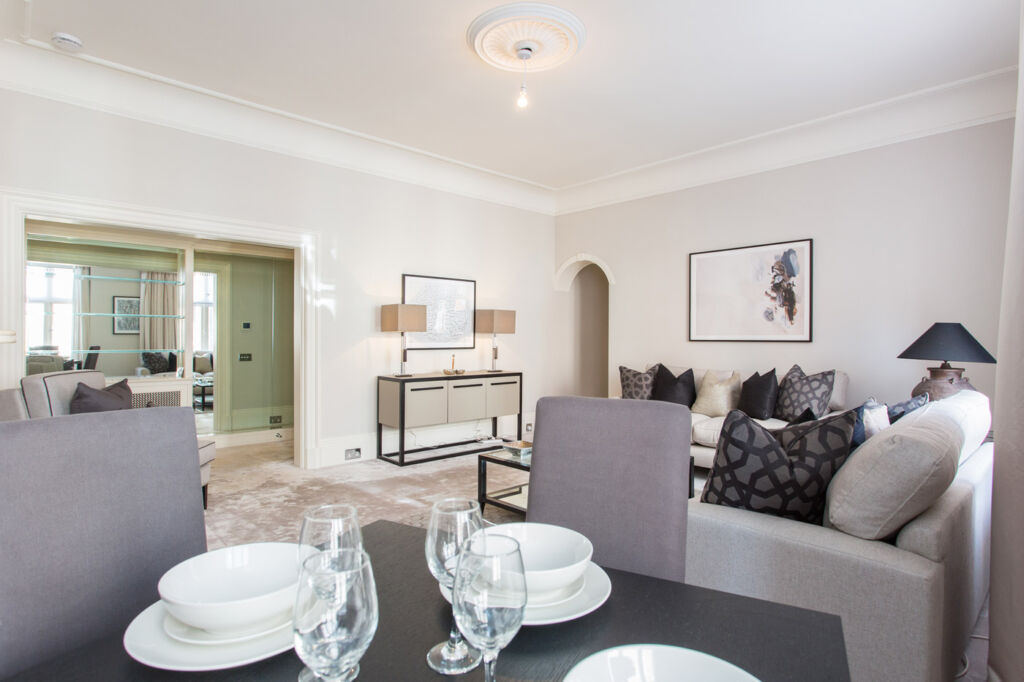 Throughout the 1,055 square-foot home, the design focuses on clean design with sumptuous furnishings for a glamorous ambience. The grand Principal suite has been furnished in cream with bespoke mirrored wardrobes offering storage and affording much light into the room, completed with an en suite bathroom with shower and bathtub.

105 Mount Street overlooks The Connaught Hotel which offers fine dining at the two Michelin-starred restaurants Hélène Darroze at The Connaught, with the newly-opened Marchesi 1824 Pasticceria, a Prada-owned Milanese café, just a short walk away.

For shopping, residents are within easy reach of both Oxford Street and South Molton Street, with an array of luxury shops and eateries along Mount Street.