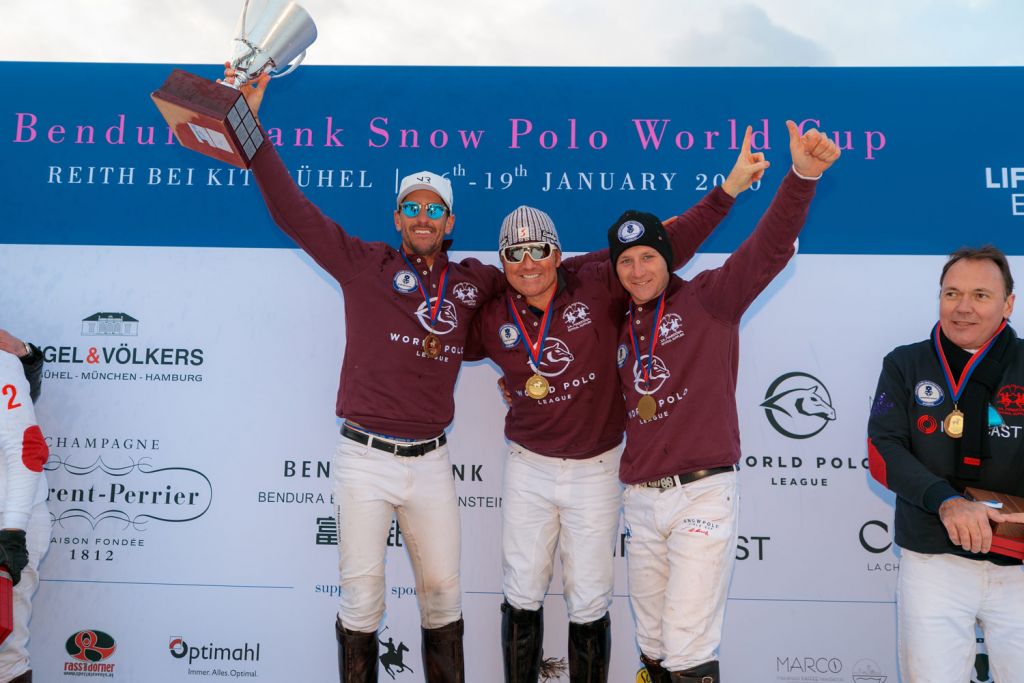 After days of intensive sporting competition, World Polo League from the USA is the champions at the 18th Bendura Bank Snow Polo World Cup Kitzbühel.

How it all transpired…
With conditions nigh on pristine, a layer of fresh powder perfectly enveloping the field and two teams ready to take their maiden voyage into the Final of The 18th Bendura Bank Snow Polo World Cup Kitzbühel, the third and final day of this thrilling tournament was always going to be a spectacle. 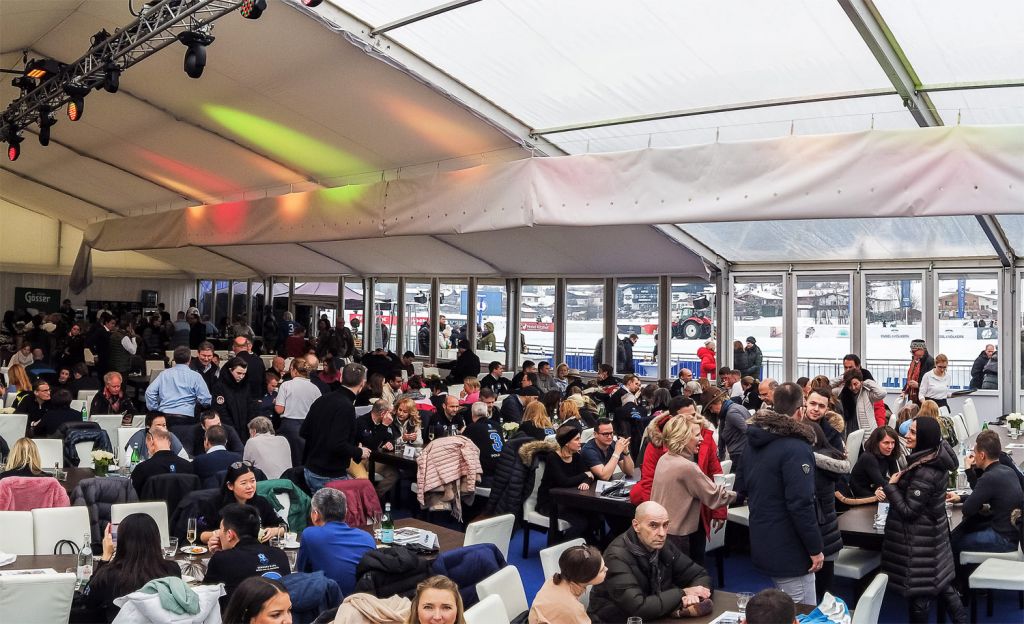 A snowy Sunday was what greeted the abundance of spectators, taking their positions on the sidelines for the first Final of the day in the heart of Kitzbühel, but as the first ball was thrown-in for The Kitzbühel Cup Final, the sun broke through, and a cheer of expectant joy rustled through the crowd.

Two thousand eighteen champions Bendura Bank were first up against rivals Laurent-Perrier, whose team coincidentally sported two of the three members of the 2019 winning Cîroc team, so it was champion versus champion to commence this epic day of polo. With the fresh snow, making conditions a little slippery, and with safety as the paramount concern, the riders took the first chukka at a reasonable pace, but with the ponies finding their footing, they turned up the pace as the match went on.

Bendura Bank’s Tito Gaudenzi was the first to find the posts, and two more goals off his stick ensured his team were ahead going towards half-time, but a quickfire goal from Laurent-Perrier’s Valentin Novillo Astrada turned the tables at the bell, putting his side half a goal ahead, 3½-3. Laurent-Perrier held the lead up until the final chukka, but a fall from Captain Sebastian Schneberger and subsequent substitution from Intocast’s Captain Matthias Normann gave Bendura Bank the brief respite they needed to regroup. Alejandro Novillo Astrada, Bendura Bank’s powerful eight goaler, secured the three goals needed in the final chukka to ensure a win for his team, 8-6½.

The second match of the day for the La Martina Cup was always going to be an even tussle. Two thousand seventeen champions Corum, with the German number one Patrick Maleitzke leading the charge, were all power from the word go, but they found a real challenge in the form of a new team for 2020, Intocast. Making their debuts at The 18th Bendura Bank Snow Polo World Cup Kitzbühel, Argentine 5 goalers Micky Duggan and Martin Jauregui, ably led by Captain Matthias Normann, meant business, scuppering Corum’s attempts on goal, time and time again.

This end to end match upped the already heightened tempo on the Kitzbühel snow, with spectators on the edge of their seats in anticipation of the teams’ next moves. At half-time, Intocast firmly led 5-3, and there was little chance of them relinquishing the lead in a hurry. Maleitzke, in a constant battle with his rival Jauregui, fought valiantly, securing two goals in the third chukka, but following three near misses in the final minutes of play, Corum just couldn’t find the posts. This fast and thrilling match came to an end with Intocast holding onto the lead, 6-5.

In the bid for third and fourth place, Engel & Völkers, in their true red devil form, were out for victory, following their win against Bendura Bank yesterday. Bernd Gruber however, making the most of their updated 2020 line-up, came firing out the starting gate. The match was fast and frantic within moments, with the pace once again upped from the previous match.

Brit 8 goaler Jonny Good, with his 17-year-old teammate Segundo Darritchon hot at his heels, scored two out of the red devils’ three goals in the first chukka, with only one in response from Bernd Gruber’s mighty Santiago Marambio. With tensions heating up on the field, it took an impromptu blizzard to cool heads and calm the pumped-up players, but as the sun broke through once again, what is sure to be considered the goal of the tournament saw Marambio, with the head of his stick missing, score his team’s second goal.

Going into half-time, the scores rested at 5-2 in Engel & Völkers favour, but with Bernd Gruber still very much in contention. The match continued to be close until the final bell sounded – with tit-for-tat goals between Darritchon and Marambio, in the next two chukkas. Despite the fiery play and cohesive teamwork of both sides, Engel & Völkers maintained the upper hand, and the red devils left the field with an 8-6 victory, much to the delight of the red-shirted fans on the sidelines.

So, with only one match to go, the all-important Final between World Polo League from America and GP Mobility from the Copa Cabana itself, Brazil. The stage was set for an almighty showdown.

Ahead of the Final, who would win was impossible to call. The teams were simply too even. The daunting force of American number one Nic Roldan was unquestionable as the teams rode onto the field, but GP Mobility had the advantage of two goals on handicap, so World Polo League were going to have their work cut out. But the fear for the Ganzi contingent on the sidelines was short-lived, as within as many minutes, a goal from WPL Captain Marc Ganzi, aka the Cobra, and his eight-goal teammate Roldan, had evened the scoreboard 2-2. The six-goal Brazilian, Guilhermo Lins, was a force all of his own from the off. 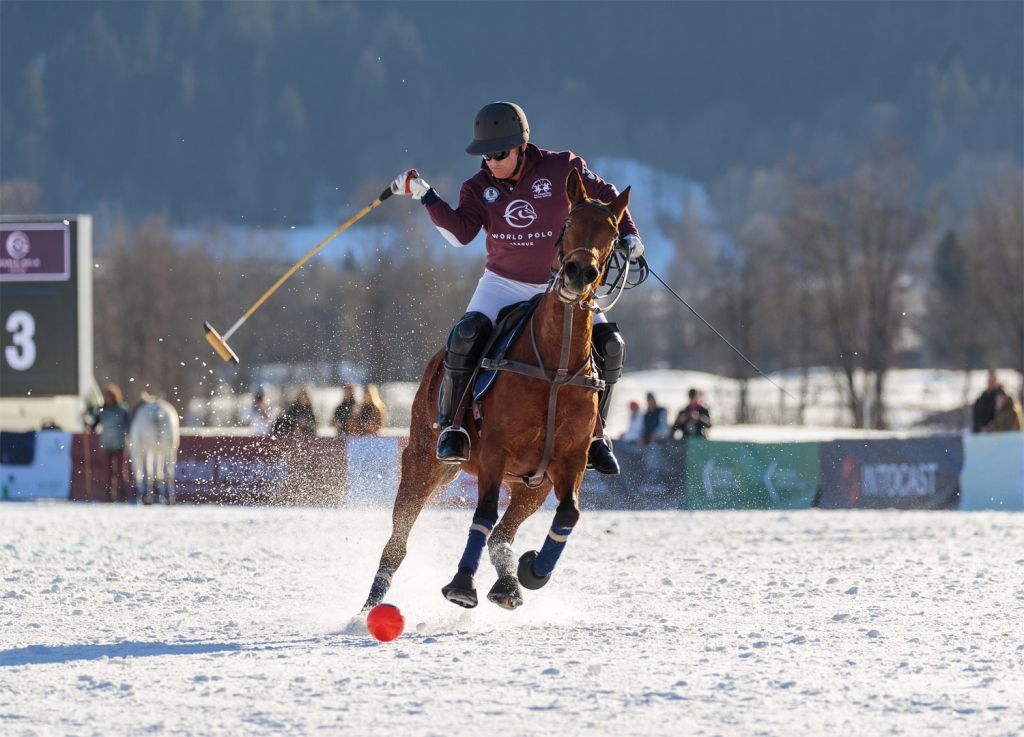 Scoring GP Mobility’s primary field goal, his ability to not only challenge the Americans but overcome the powerful Roldan ride-offs was a spectacle to behold. In the first half, GP Mobility had their work cut out, with 80 per cent of their play on the defensive. With a phenomenal pass, straight to the waiting stick of his Captain, Marcus Schdallach later named Most Valuable Player for his consistently impressive play, GP Mobility were back in business at 4-4. It was fast, it was furious, and boy was it exciting. As the teams headed into the half-time break, a flurry of near-misses and ultimately goals, saw World Polo League back ahead, but GP Mobility was hot on their heels, 7-6. 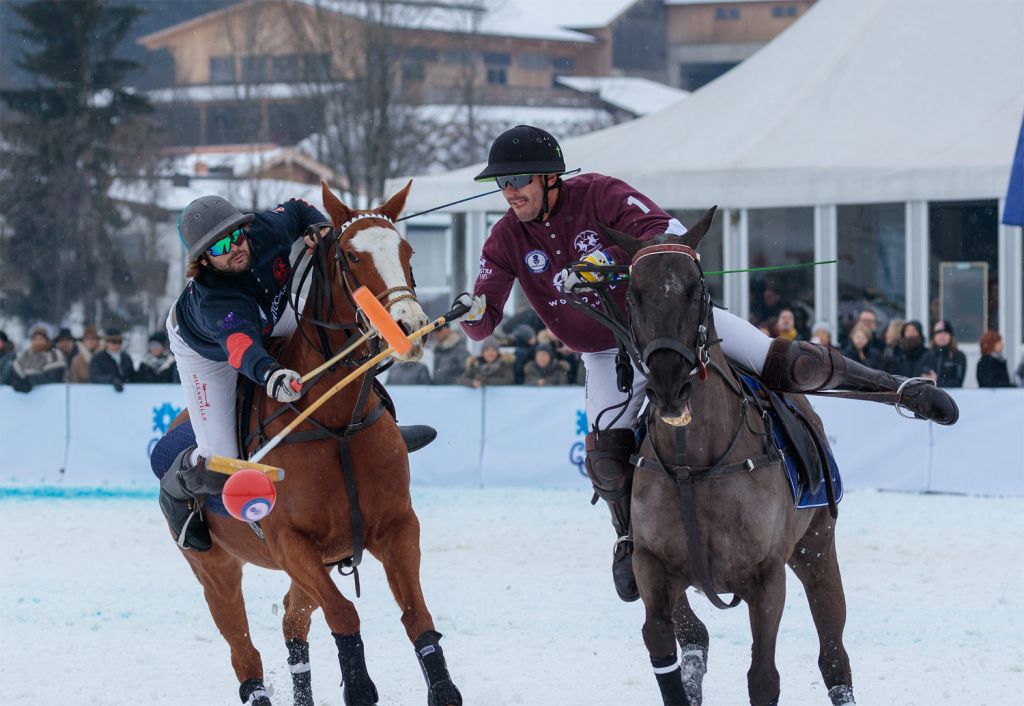 Tensions were mounting both on and off the field in the third chukka, with players responding to bad bounces with bigger hits, as this end-to-end excitement seemed to bring these two powerhouse teams to almost breaking point. The scores evened up once again, this time at 7-7 thanks to Lins, but young Juan Bautista Peluso wasn’t done yet for his World Polo League side, as he found the posts just in time for the bell. If you thought the first three chukkas were exciting, then what happened in the fourth would have beggared belief. 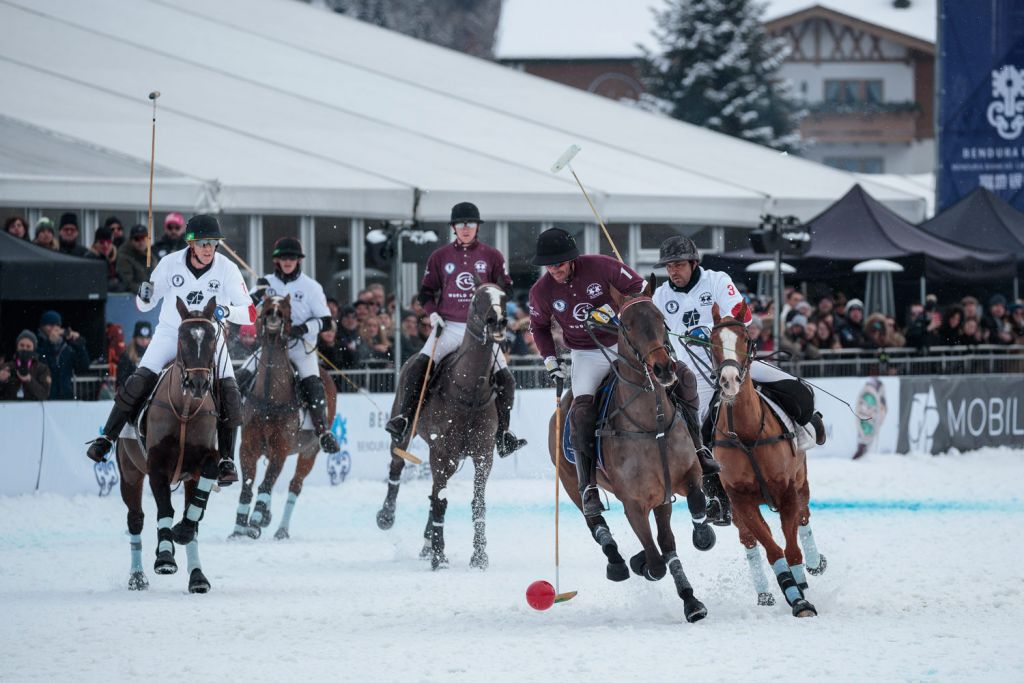 As the ball flew up to the Brazilian’s end of the field, Roldan, in a play worth way more than his eight goals permitted, took the ball from the halfway line, in the air, bouncing one, two, three times before striking the ball under the neck of his pony and scoring a seemingly impossible goal from one of the most challenging positions on the field.

His extraordinary skill had the crowd in stunned silence, which then erupted into a resounding cheer! This fantastic play was the sign of things to come and, however, hard GP Mobility fought, the Americans were just that one step ahead. With another ‘air shot’ volley goal from Roldan, to only one in response from Lins, who was later named the recipient of the Fair Play Award, it was all over for the team from Brazil. 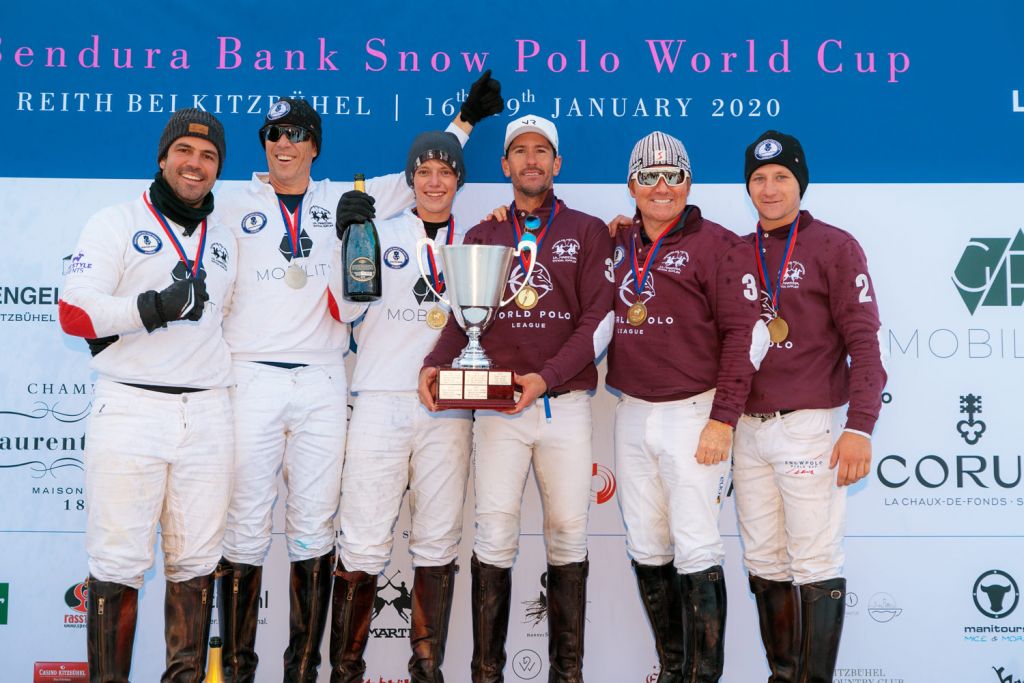 The World Polo League team, a brand new addition to the 2020 instalment of The Bendura Bank Snow Polo World Cup Kitzbühel, were crowned the resounding champions and one thing’s for sure, with skill like that, Kitzbühel can’t wait to welcome them back next year!

Help Hedgehogs this Bonfire Night by Giving them ‘Room to Roam’

The New Hackett London and Aston Martin Racing Collection for 2021