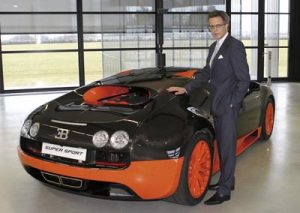 Three unique Bugatti’s on display at the Geneva Motor Show
Geneva/Molsheim, – on the evening before the Geneva Motor Show, the outgoing and incoming presidents of Bugatti Automobiles S.A.S. arrived at the Volkswagen Group Evening in a Bugatti Atalante – one of the rarest and most expensive cars ever made – to finalize their regime change in front of an audience of 500 journalists. The new appointee, Wolfgang Dürheimer, praised departing Chief Executive Officer Dr. Franz-Josef Paefgen on everything he had achieved for the Bugatti brand.

“Developing the Bugatti Veyron was one of the biggest engineering challenges I have ever faced,” said Paefgen. “Constructing an engine with over 1,000 hp was only the start.
We had to redesign every component from scratch: the gearbox, the input shafts, the tires, the brakes and the passenger cell – and everything had to be as light as possible, so we used materials such as titanium, magnesium, aluminium and carbon fibre.
The whole Bugatti team really did an extraordinarily fine job.”

“Franz-Josef Paefgen led a team that created truly unmatched automobiles in the form of the Veyron, the Grand Sport and the SuperSport – sports cars which are still far ahead of their time in terms of both design and technology,” said Dürheimer. “Paefgen has succeeded in breathing new life into the Bugatti brand.

The acceleration alone, from 0 to 300 km/h in 14.6 seconds, speaks for itself. You have to remember that six years ago, when the Veyron came onto the market, many commentators were dubious as to whether Bugatti would succeed at all in reviving the brand. It is a great pleasure to have the opportunity to continue building this exceptional brand and playing a role in shaping its future direction.”

Focus on the Grand Sport
The Bugatti Veyron 16.4 Grand Sport is currently the fastest, most powerful and most exclusive convertible in the world. The Grand Sport gives drivers the combined pleasures of sun, wind and speed. The thunderous roar of the 16-cylinder mid-mounted engine surrounds you, the acceleration is akin to lift-off, and the spectacular gulping suction from the air intakes leaves you feeling like you are being lifted out of your seat.

When developing the Bugatti Veyron 16.4 Grand Sport, it was necessary to make significant modifications to the Grand Sport’s complex structure in order to make open-top driving safe and enjoyable. The removable glass roof presented new challenges, even for a brand which has always upheld the highest standards in automotive solutions, aesthetics and driving dynamics. Extremely strong yet lightweight, the carbon-fibre monocoque passenger shell is a central element of the vehicle’s structure.

As the roof is an integral part of this, removing it meant the load paths had to be completely redesigned to maintain the vehicle’s rigidity and crash safety and to offer the same protection from side impacts and rolling. As a result, the Grand Sport’s monocoque was reinforced around the side skirts and the central tunnel.

The doors are made of carbon fibre and house an integrated longitudinal beam. In the event of an accident, this transfers the load from the A to the B pillar. Additionally, the two redesigned air intakes now feature 10-centimetre wide carbon-fibre elements to offer protection if and when the car rolls. Fitted with a host of innovative safety systems and new equipment features, the fastest street-legal sports car in the world can now be experienced as both a convertible and a coupé with a panoramic polycarbonate roof. The result is an automobile which can be customized and tailored to suit almost any imaginable requirement.

The two special-edition Grand Sports on display at the Geneva Motor Show are presented in a two-tone horizontal colour split. The first one is resplendent in visible blue carbon, framed in polished aluminium. This striking contrast extends from the wheels to the interior. The console is of the same exposed blue carbon and the dashboard, steering wheel and gear lever are encased in blue leather with silver stitching, while the seats are finished in silver-coloured leather with blue stitched seams.

This special edition has a price tag of 1.75 million euros (2.4 million US dollars) and has already been sold.

The second special edition on display is a Grand Sport in matte white, with matte-white tinted air intakes, surrounded by clear-lacquered blue carbon elements, including blue-tinted wheels. The interior of this car is also dominated by blue tones, forming a dramatic backdrop to the white stitching on the seats, steering wheel, gear lever and aluminium console. It comes at a price of 1.6 million euros (2.2 million US dollars) and it too has already been sold.

SuperSport makes its motor show debut
The third model exhibited at the Geneva Motor Show is a SuperSport. It has the same black and orange finish as the World Record Edition models, but the style is completely different. This time, the exterior is matte and high-gloss black, while the interior is finished with tangerine leather throughout. Only the door panels, dashboard, steering wheel and console are covered in black leather or exposed carbon. This Super Sport edition has an impressive price tag of 1.9 million euros (2.6 million US dollars) and has also already been sold.