Since 1912, Montegrappa has been manufacturing high-quality writing instruments in the same historic building in Bassano del Grappa, North East Italy. The latest launch within its Icons series of writing instruments, pays tribute to cultural giants from around the world. The newest in the Icons series honours one of Asia’s greatest cultural figures and one of the 20th Centurys strongest, most influential personalities. Combining the two has resulted in a commemorative pen of significance and resonance.

For the second pen in the Icons series, Montegrappa has chosen a person that embodied all that is noble in the field of martial arts. At the same time, he opened the West to the disciplines of the East, while helping to establish martial arts films outside of Hong Kong, a genre that remains globally popular 37 years after his death. On the 70th Anniversary of his birth, Montegrappa pays homage the the Icon and Legend Bruce Lee with the introduction of the Montegrappa Bruce Lee Pen

Bruce Lee was born in San Francisco, California, to parents of Hong Kong heritage and raised in Hong Kong until his late teens. He returned to the United States to claim American citizenship when he turned 18, while continuing his education. Around this time he began teaching martial arts, which would lead him to film and television roles, including that of Kato, the Green Hornet’s sidekick.

Due to the success of his martial arts movies, Bruce Lee almost single-handedly sparked a surge of interest in Chinese martial arts in the West in the 1970s. He is noted for his stellar roles in five feature-length films, including The Big Boss, Fist of Fury and Way of the Dragon, and two posthumous releases, Enter the Dragon and The Game of Death. But he was more than a mere martial arts actor: he endeared himself to Chinese audiences as a role model who revered Chinese culture, while his devotion to martial arts resulted in a personal style he called “Jeet Kune Do” (The Way of the Intercepting Fist). In 1999, on the eve of a new millennium, Bruce Lee was named by Time Magazine as one of the 100 most influential people of the 20th Century. 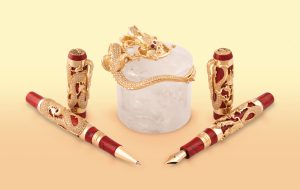 In fitting fashion Montegrappa honours Bruce Lee with a long-awaited re-interpretation of one of its most coveted pens ‘The Drago’. Bruce Lee was known as ‘The Dragon’, having been born on the day and in the hour of ‘The Dragon’ in the Chinese horoscope, the hollywood movie of his life story starring Jason Scott Lee in the role of Bruce Lee was also called Dragon.

In Chinese iconography, the Dragon holds special significance. The dragon became the Chinese national symbol in 1912, the same year that Montegrappa started its production of writing instruments. The limited edition pen of 1995 celebrated the encounter of these two cultures, the Orient and the Occident. It was a fountain pen born under the sign of the dragon, a fascinating symbolic figure, interpreted by the skilled hands of the artist Federico Monti. The image of the dragon came to life in the body and on the cap of the Montegrappas Bruce Lee creation, transforming a writing object into a work of art, inspired by myths and legends.

The original Montegrappa pen was available in a limited run of one thousand nine hundred and twelve pieces to celebrate the founding of the company. It was produced in black mother-of-pearl celluloid and sterling silver. Only one hundred fountain pens were issued in 18K gold. The fountain pen had a piston filling system, and was available with nibs in six widths. These pens can now be found solely and rarely in collecting circles.

Resembling the original, the new Montegrappa Bruce Lee limited edition pen has been distinguished from the original 1995 release by a change in the design of the pocket clip, a new colour, the detail of the Dragons tail on the pen barrel, the fountain pen nib and the top of the cap. The Montegrappa  Dragon Bruce Lee limited edition features a body and cap made of red celluloid with black veining, referred to as ‘cinnamon’. Topping the cap is the immortal yin-yang symbol, representing balance. The cap and the barrel are both embraced by exquisitely carved dragons, their eyes highlighted by rubies on the sterling silver version and by matching precious stones on the fully-encrusted versions. The nib itself features the profile of Bruce Lee in a famous move, foot and fist extended, suspended in air.

The launch of the Montegrappa Bruce Lee pen will consist of the following numbers and variations:

Also offered, in addition to the two thousand individual Montegrappa Bruce Lee pen’s listed above, will be 10 sets consisting of fountain pen, roller ball and inkwell in solid gold, with white diamonds.