A painting by the 17th century Dutch master Frans Hals offered from The Collection of Elizabeth Taylor fetched $2,098,500 at Christie’s New York, soaring beyond its pre-sale estimate of $700,000-$1 million. The sale price places the work among the top ten prices ever achieved for the artist’s works at auction. 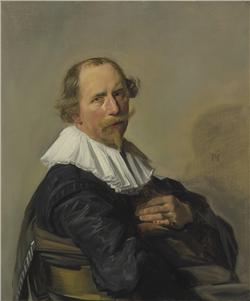 The painting, entitled Portrait of a Gentleman, half-length, in a black coat, is the only Old Master painting within the late film star’s extensive collection and is a key highlight of Christie’s two-day sale of Old Master Paintings, Drawings and Watercolors. Thirty eight more works of Impressionist and Modern art from Miss Taylor’s collection will be offered for sale at Christie’s London on February 7 & 8, as part of their major winter auction series devoted to modern and contemporary art.  In December 2011, Christie’s New York sold jewelry, fashion, decorative arts and memorabilia from the Collection in a four-day marathon auction series that totaled $156.8 million and set multiple new auction records (see summary release here).

In the saleroom, the Hals portrait was pursued by multiple bidders in the room and on phone. As bidding reached the $1 million mark, the battle came down to two potential buyers – one in the room and one on the phone – who traded bids back and forth in $100,000 increments until the price neared the $2 million mark. After four minutes total, the winning bid was taken by Christie’s Clementine Kerr on behalf of an anonymous bidder on the phone.

Painted in the early 1630s by Hals (Antwerp 1581/85–1666 Haarlem), the elegant portrait of a gentleman had been displayed above the fireplace in Elizabeth Taylor’s Bel Air home. Previously thought to be by a follower of Hals, the painting was authoritatively attributed to the master himself in 2011 on the basis of first-hand examination by Christie’s experts and scholars in the field. Formal characteristics link the work with other paintings by Hals from the early 1630s, such as those in the National Gallery, London, and the Frans Hals Museum, Haarlem.