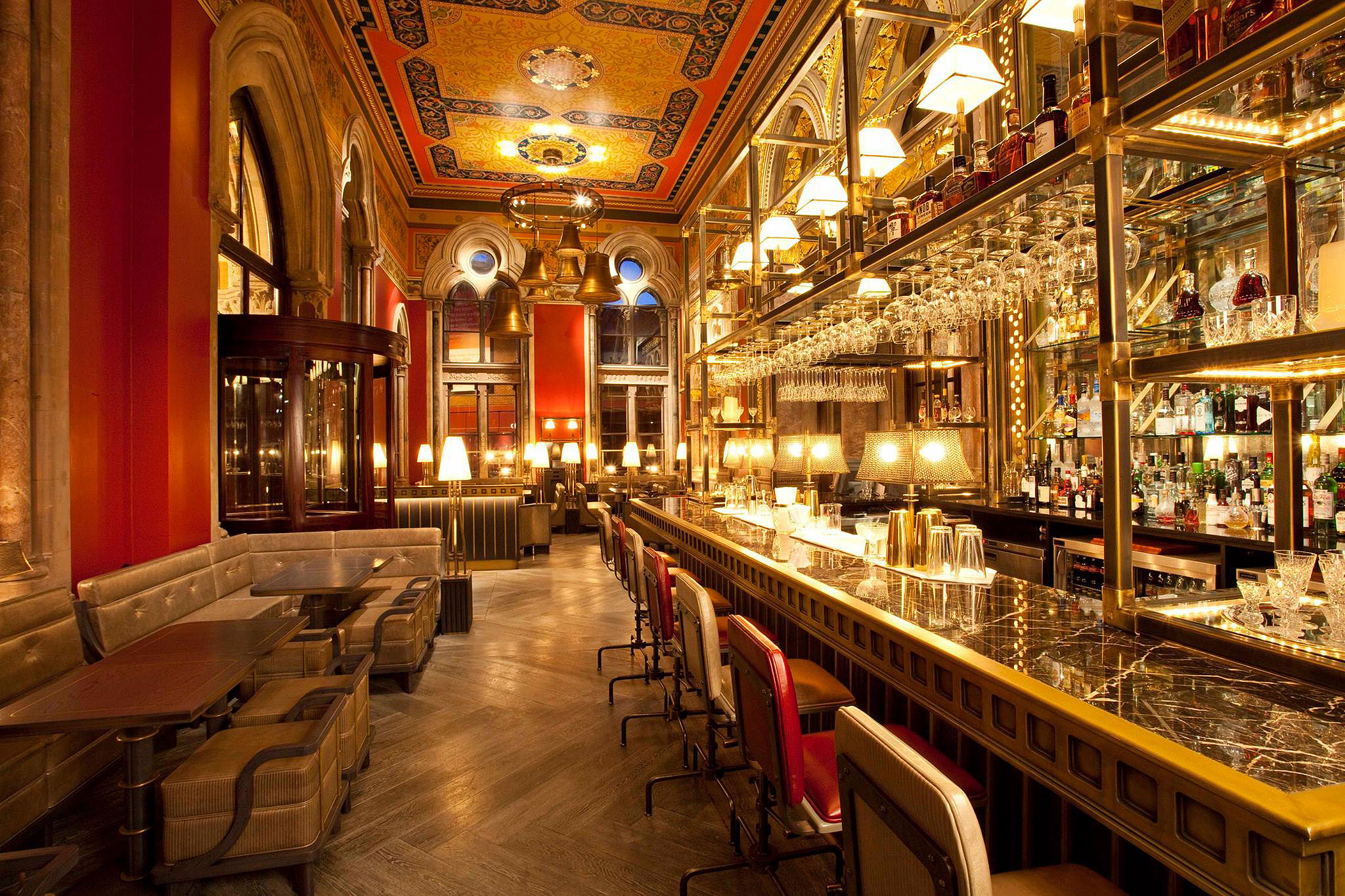 Hidden away on the lower levels of the five-star St Pancras Renaissance Hotel, which sits within one of London’s largest rail hubs, is The Gilbert Scott

Celebrating its fifth anniversary this year after opening in 2011, The Gilbert Scott occupies the entrance hall and coffee room of the former Midland Grand Hotel which dates back to as far as 1873, and is named after the original building’s great architect, Sir George Gilbert Scott. 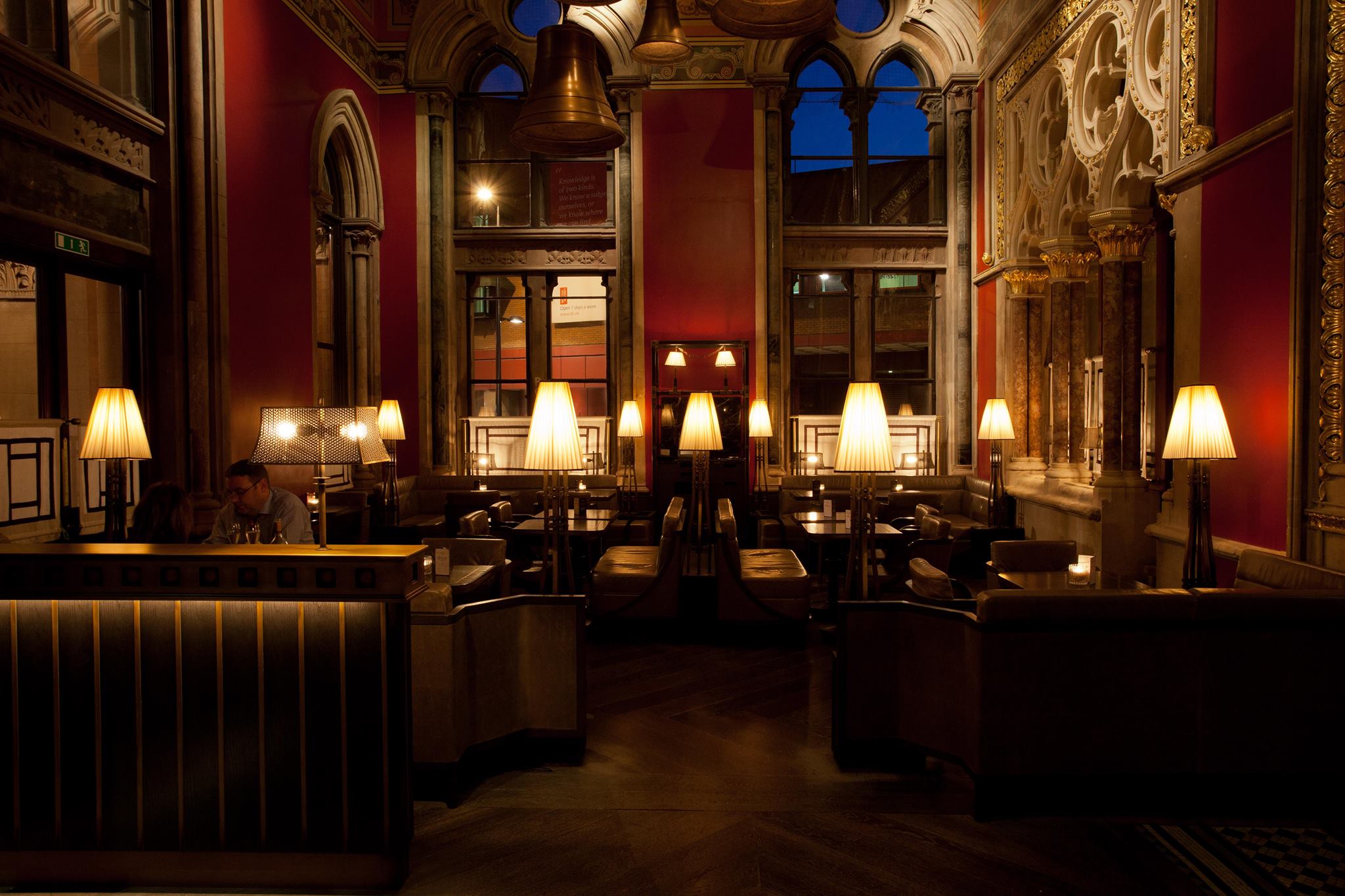 Diners are treated to an architecturally beautiful setting boasting a very ornate high ceiling, elegant chandeliers and luxury red banquettes whilst being entertained by the discreet performance of a live piano player which accompanies the calm and quiet environment of this eatery. Drawing inspiration from the pioneering and skilled cooks of old time England, such as Francis White and John Nott, The Gilbert Scott’s menu celebrates the wonderful British produce available today in the modern world.

The opening course offers delicacies spanning from cockles and Dorset crab to Carlingford Lough oysters. Having always been one of my favourite starters, I chose the Brown and Forrest Scottish smoked salmon. A hint of lemon juice, and the high quality smoked salmon married with the freshly-cut soda bread provided the perfect permutation to treat the palate before embarking on the sumptuous courses that were to follow. My guest on the other hand decided on the roasted vegetable salad, primarily composed of a mixture of ‘in-season’ root varieties such as squash, turnip, celeriac, and Jerusalem artichoke. The soft and creamy texture of the former allowed these normally tough vegetables to simply glide past your taste buds, whilst the entire plate was lightly seasoned by a balsamic dressing which bound the flavours nicely together. 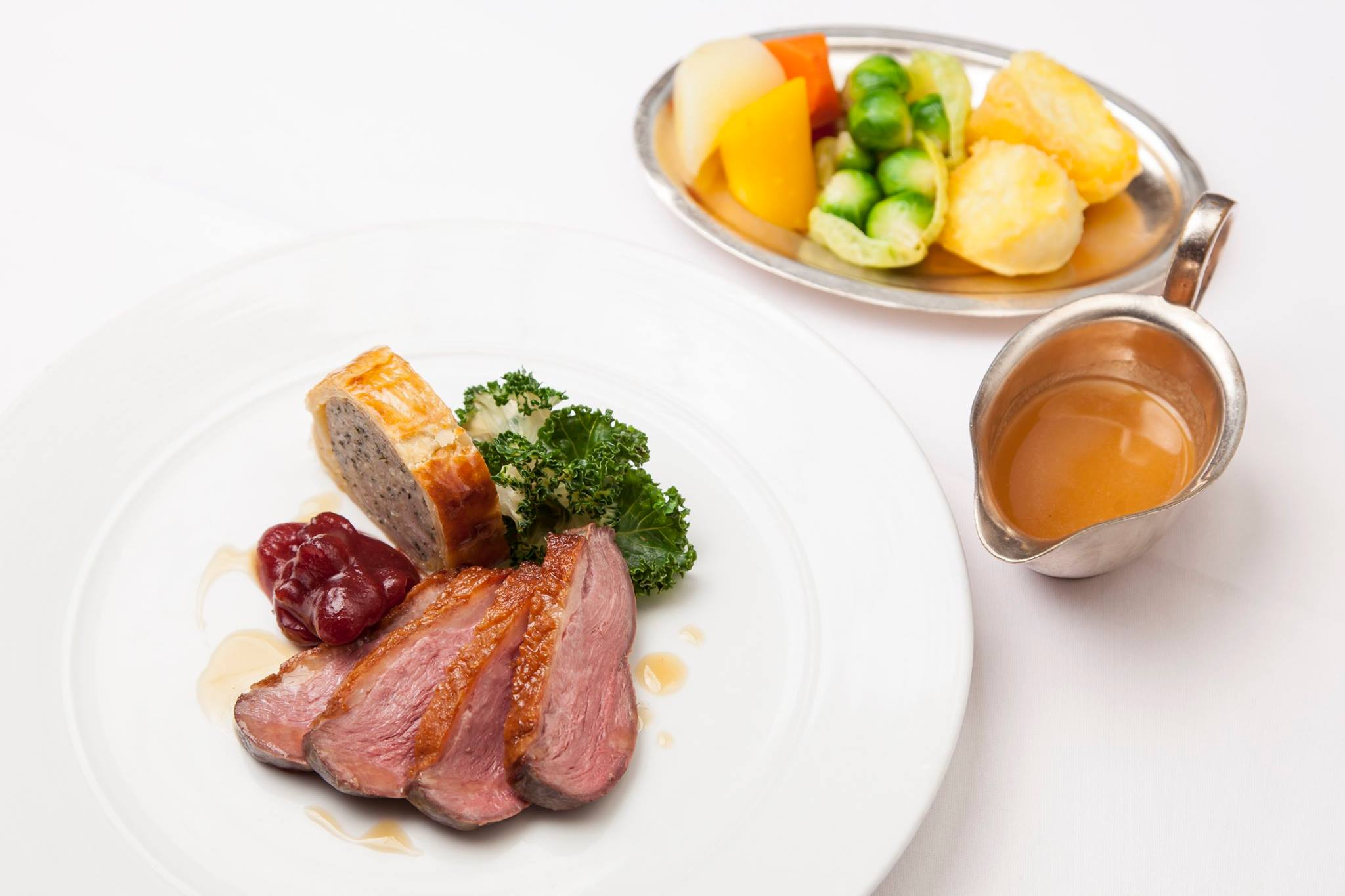 The main courses found on the menu are largely orientated around dishes based on meat or fish but are equally interspersed by a few vegetarian options which include Smoked Cheddar Macaroni and a Glamorgan cheese, mustard and leek tart. Following the theme of the hors d’oeuvre, I selected the fillet of Cornish Sea Bass which rested on a bed of finely-cut fennel strips and small blood orange segments. The tangy nature of the blood orange coupled with a side serving of dressing emanating from the same fruit added a subtle but not over-bearing hint of citrus to the fish which was what can only be described as delicate and moist in consistency. The Gilbert Scott was so far living up to its acclaimed reputation.

My companion was suitably impressed by the ‘on the bone’ Dover Sole. Albeit a little plain when served due to the absence of any decorative elements, this became insignificant because once joined by the delicate butter meunière featuring black capers as well as the mineral notes and flinty nature of the Chardonnay chosen by the restaurant’s young Sommelier, the result was sensational. The white fish drifted off the bone with ease and the rich odours made every bite truly memorable. A side helping of al dente green beans and new potatoes completed the course. 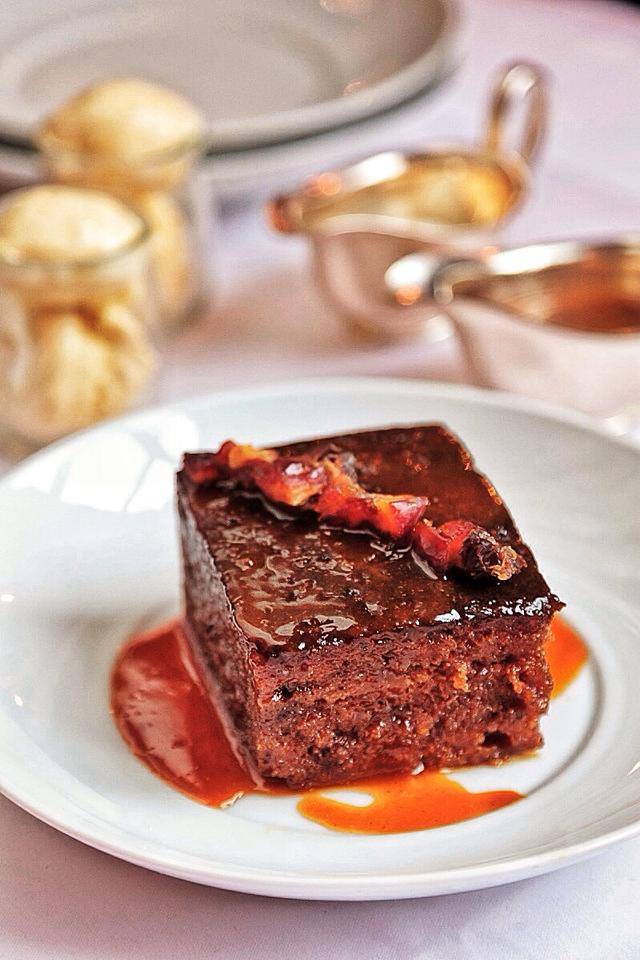 Our French host, who had demonstrated meticulous service and consistent attention to detail throughout the evening, suggested taking a break before embarking on the dessert.

This was so that we could enjoy a rare tour of the arc-shaped kitchen area in order to witness first-hand the ‘inner workings’ of The Gilbert Scott which are housed beneath the feet of visitors. Mirroring the restaurant above, there is a remarkable air of tranquillity and is a far cry from the hectic pace that one would expect to see in this type of venue. Each member of staff is meticulously crafting a dish in their own area, almost in silence. The preparation areas and dozen or so personnel are also remarkably cool in temperature thanks to the use of induction cookers rather than those fuelled by conventional gas due to the age of the building which harks back to the Victorian era.

By the time we had re-taken our seats, the lights were further dimmed making for a cosy ambiance for which to enjoy the closing chapter of a delightful meal. The short menu which counts cheeses, choc-ices, and Lord Mayor’s trifle amongst other possibilities, luckily makes the final decision not too challenging. My heart was set on the ‘Walnut Whip’, concocted from an irresistible trio of sweet and sugar-rich delights, namely chocolate mousse, marshmallow, and walnut ice-cream. As the three elements merge together, this magnificent combination only leaves you wanting more every time the spoon hits your mouth, and the crunchy caramelised walnuts, which garnish this particular dish, are the ‘pièce de résistance’.

My companion opted for the beautifully-presented ‘Apple Amber’ which took the form of sliced apples on an almond base finished with pointed meringues, another roaring success. 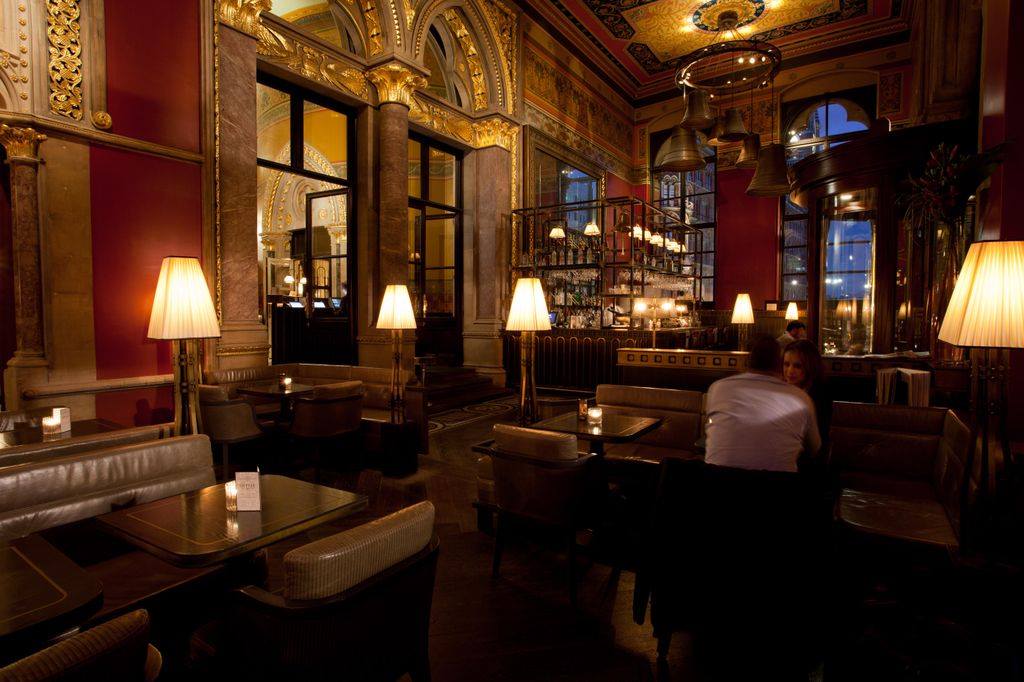 Whether for a business meeting, a romantic meal, or quality time away from the hustle and bustle, The Gilbert Scott should be the first stop. This is a restaurant that lets guests truly relax whilst dining and discussing within sophisticated and intricate surroundings.

The Gilbert Scott – Where and how

More than 230 wines are on offer at The Gilbert Scott, and we enjoyed the following pairings during the meal: 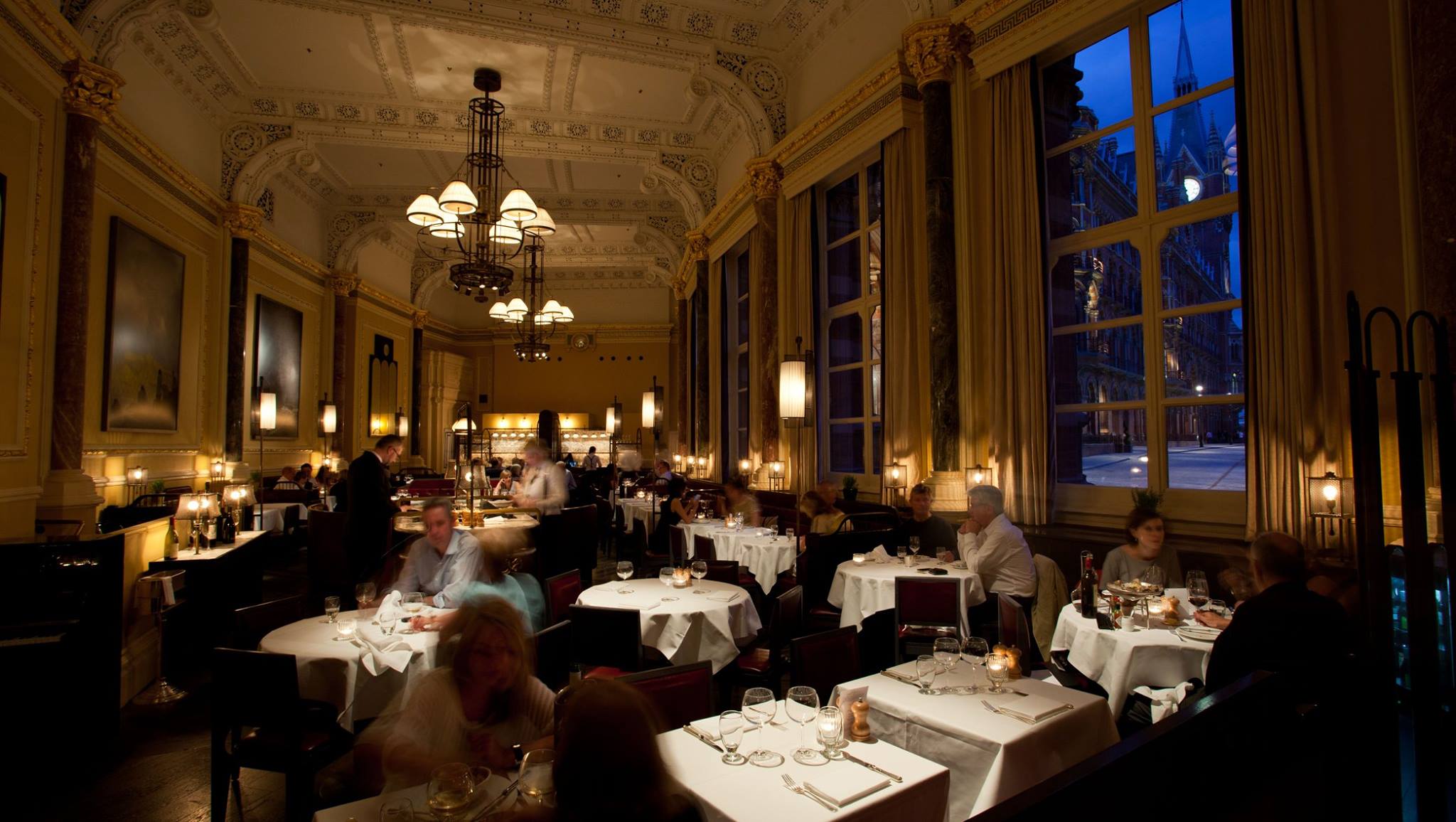