The past year (2011) saw a series of art world records broken at Bonhams salerooms round the world. These include: 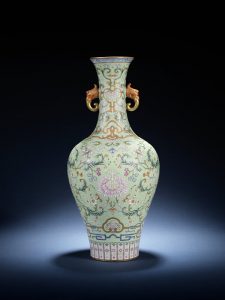 Chinese Art
Bonhams Hong Kong set a new outright world record for a Chinese snuff bottle on 28 November 2011, at the auction of the celebrated Mary and George Bloch Collection: Part IV at the Island Shangri-La Hotel, Hong Kong. The tiny, yet exquisite, ‘famille-rose’ enamelled glass ‘European-subject’ snuff bottle made in the Imperial Palace workshops in Beijing during the Emperor Qianlong period (1736-1795) measures only 8.07cm high. International bidders in the packed auction room and on the telephone battled the bidding up to a final figure of HK$25.3 million (US$3,328,400; GBP2,108,333). It set a new world record for any Chinese snuff bottle, beating Bonhams own record, established only eighteen months ago.

One of the highest prices achieved at auction for Chinese ceramics was the floral turquoise Qianlong Imperial vase which sold in New Bond St for £9m.

Japanese Art
Not only was the Harriet Szechenyi Collection of Japanese Art the highest grossing single-owner Japanese sale in auction history, but the sale also produced two world records for a netsuke (miniature carving) and an inro (traditional Japanese case consisting of nested boxes). The world record for netsuke sold at auction was broken by lot 14, a stunning late 18th century ivory netsuke of a shishi (lion dog) that realised £265,250, after much enthusiastic bidding in the room and on the telephone.

Other masterpieces within the sale at Bonhams included a superb collection of inro, due to Harriet Szechenyi’s later interest in the Japanese art of lacquering. A single case lacquer inro by Shibata Zeshin (lot 316), one of the most famous painters and lacquerers of the 19th Century, also made a new world record selling for £265,250. The previous record for an inro sold at auction was broken by Bonhams in 2010, for an inro by Shibata Zeshin in Part 1 of the Edward Wrangham collection that sold for £162,000.

Old Master Paintings
A lost masterpiece of considerable importance, ‘Three peaches on a stone ledge with a Painted Lady butterfly’ by the Dutch artist Adriaen Coorte, sold for £2.1 million on December 7th in New Bond Street, setting a new world record price for the artist at auction. This previously unrecorded painting is an interesting addition to Coorte’s oeuvre.

Russian Art
The painting, ‘He that is without Sin’ by Vasili Polenov sold for £4.07 million, a world record for the artist sold at Auction at New Bond Street, November 30th 2011.

South African Art
The South African Sale on 23 March 2011 was the highest-grossing auction of South African art ever held worldwide (over ZAR100million, beating the previous record set by Bonhams in September 2008) and included the ‘Arab Priest’ by Irma Stern, which sold for £3,044,000, a world record for any South African artwork, and also for the artist.

19th Century Paintings
A new world record for Archibald Thorburn was made with ‘Peacock and Peacock Butterfly’ – £252,000, 13th July 2011. And the Reydon Hall sale yielded another world record, for a work by the artist Edward Smythe at £39,650. 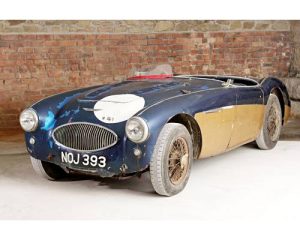 Collectors Motor Cars
An unrestored works racing team 1953 Austin-Healey ‘100’ Special Test Car, which was campaigned in period by racing drivers Lance Macklin, Gordon Wilkins and Marcel Becquart, sold for a world record £843,000 on 1st December at Bonhams’ December Sale. The car, which was offered in ‘barn find’ condition for the first time in 42 years, was bought by a private buyer within the room at Mercedes-Benz World, Weybridge, Surrey.

Books, Maps and Manuscripts
The last letter in private hands from John Keats to his fiancée, Fanny Brawne, was sold in March to Keats House in London for a record £96,000. It had formed part of the Roy Davids Collection of Paper and Portraits.

Reports of the Juries of the Great Exhibition, owned and presented by William Henry Fox Talbot to his daughter, sold for £216,000: a world record for this book, and possibly for any printed book illustrated with photographs.

Antique Arms & Armour
A world record was achieved for a cased pair of British flintlock duelling pistols which sold for £67,250 on 30th November in Knightsbridge.

Whisky
A rare and exclusive bottle of 55 Year Old Glenfiddich commemorating and celebrating the 110th birthday of Janet Sheed Roberts, the granddaughter of William Grant – founder of the Glenfiddich distillery – and the oldest person in Scotland sold for a world record £46,850 at Bonhams Whisky auction in Edinburgh on 14 December. The previous world record for a bottle of single malt at auction was £29,700.