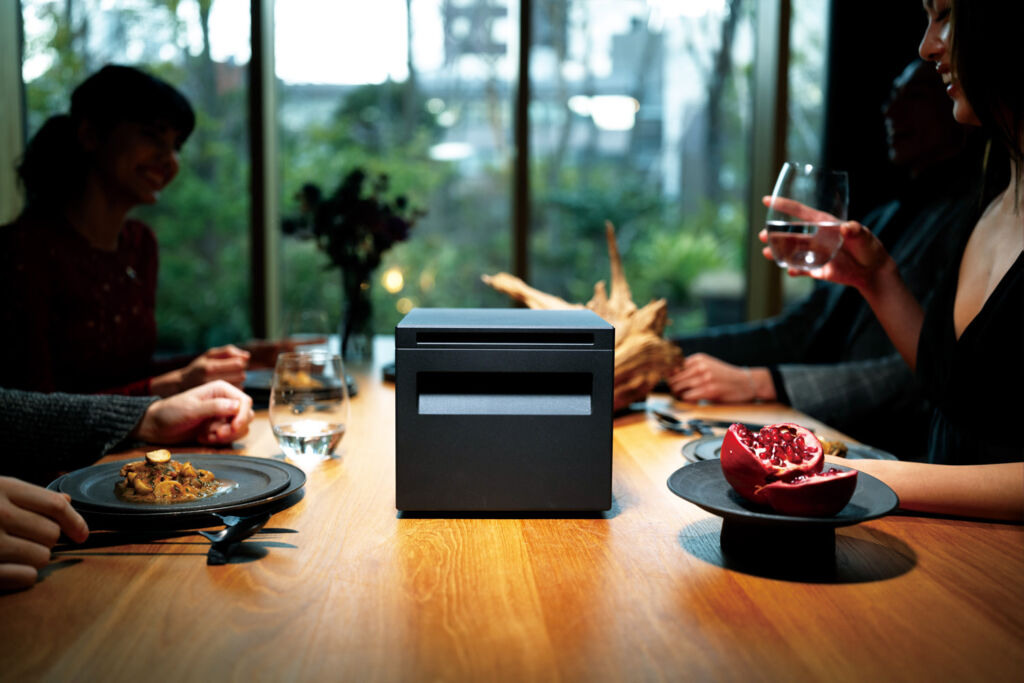 Back to basics and nature is something we’ve all become familiar with during the past twelve months. The ANAORI kakugama keeps to this trend by allowing professional, and home cooks the opportunity to achieve culinary perfection rooted in tradition.

There’s a saying: “Good things come in threes”, and this is certainly the case when it comes to products for the kitchen. In the past month, we have introduced the LG Instaview Refrigerator, then the Siemens new GlassdraftAir extractor came along and now we have the ANAORI kakugama.

The Instaview and GlassdraftAir caught our eyes because of their wow factor. The ANAORI kakugama is a little different as it is understated to the point where it becomes an object of beauty. 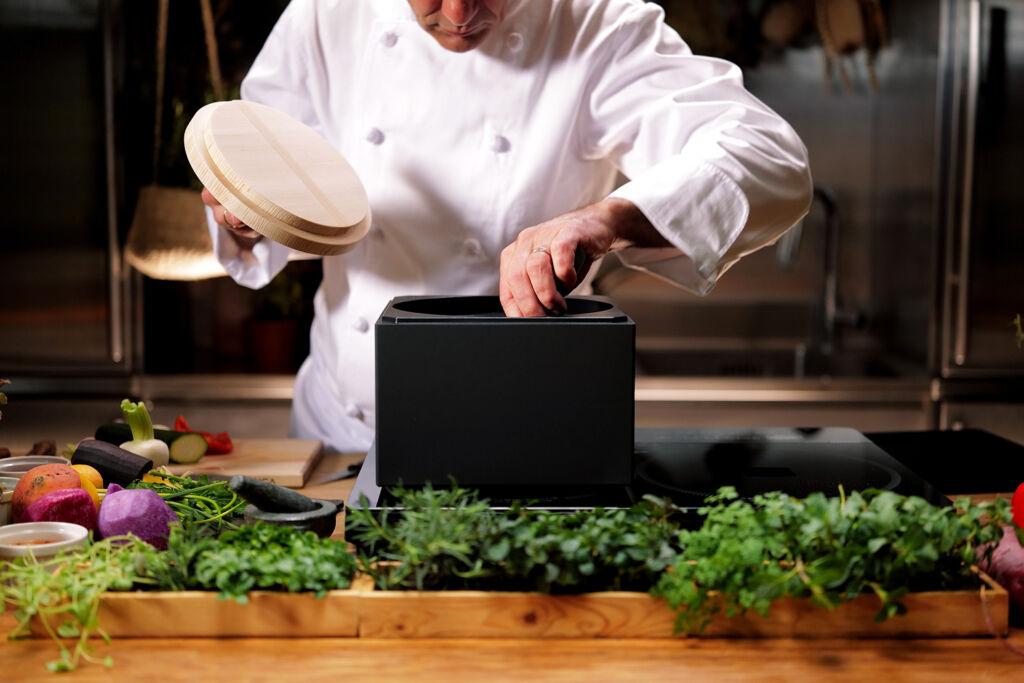 We realise that the word kakugama is probably not a word too familiar to many of our readers, so in this article, we’ll be explaining the story behind this fantastic product and what it can do:

About ANAORI
ANAORI of the ANAORI Carbon Co., Ltd., to give it its full and correct name, has more than half a century of experience in the field of carbon graphite technology. During this time, they’ve become specialists in numerous areas, including electrical conductivity, wear-resistance and thermal shock resistance, all of which come into play with the kakugama.

The company was founded by Eiichi Anaori, who, as a child, would watch his father heat chunks of carbon from the factory to roast sweet potatoes. It is memories such as this that compelled Eiichi to establish the company and, along the way, partner with Japanese Chef Hirohisa Koyama.

The two then created culinary applications using carbon graphite which was inspired by the wisdom borne from Japanese cuisine. Their flagship is the ANAORI kakugama which combines their tried and tested technology with a liberal dose of tradition. 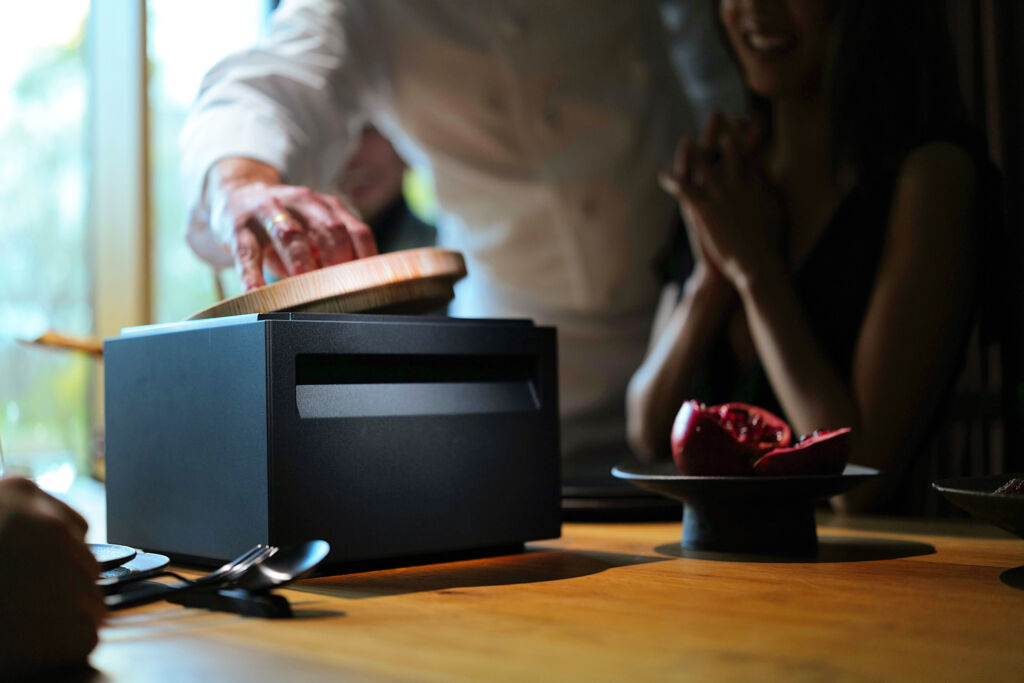 About the ANAORI kakugama models
There are two ANAORI kakugama models, differentiated by their size. Each of the models is carved from a solid block of carbon graphite, which results in a unique minimalist design coupled with a lid made from Hinoki cypress, which is a signature of Japanese cuisine.

The simplest way to describe the kakugama is it’s a cube-shaped cooking vessel with a circular centre made from an astonishingly efficient material. In the main, it consists of the body, top plate and between them, a lid. Aside from the Hinoki cypress lid, the parts can be used for cooking, preparing and serving food in a natural and traditional way. 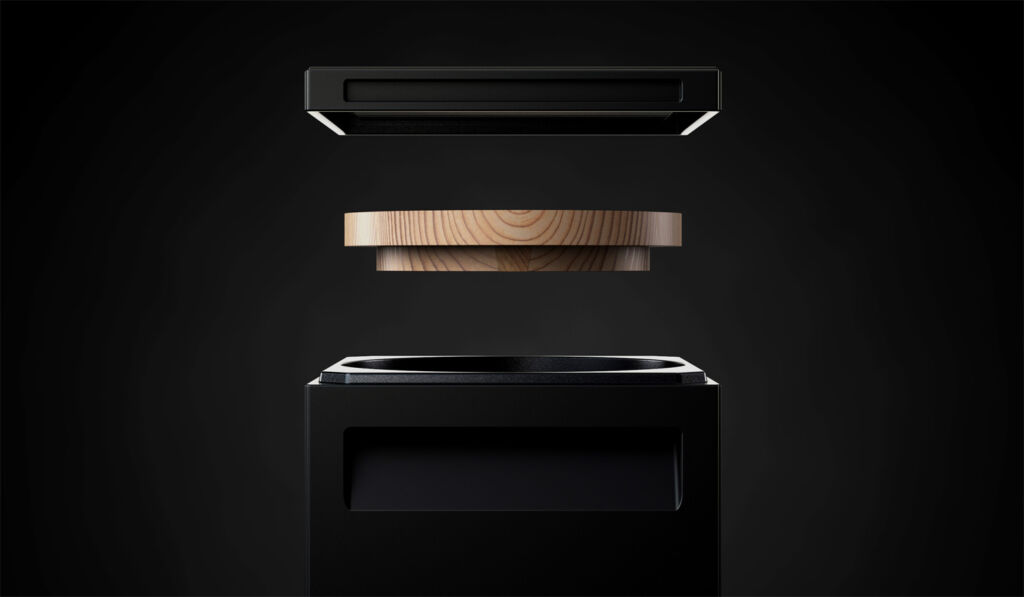 The minimalist design of the ANAORI kakugama is what makes it such an attractive piece for the kitchen. The cube has chamfered edges that were inspired by the Japanese tea ceremony and a rounded bottom. The bottom, the Imo-gata, is a pot shape that was incredibly popular until the middle of the Edo period (1603 – 1868).

The circular shape inside the kakugama (originally conceived from firewood cooking) allows it to distribute heat to perfection, retaining and accentuating flavours.

The key to the effectiveness of this extraordinary cooking tool is the material it is made from. The carbon graphite offers some exceptional properties, including a resistance to wear, heat and acids. It is also an ideal thermal and electrical conductivity. 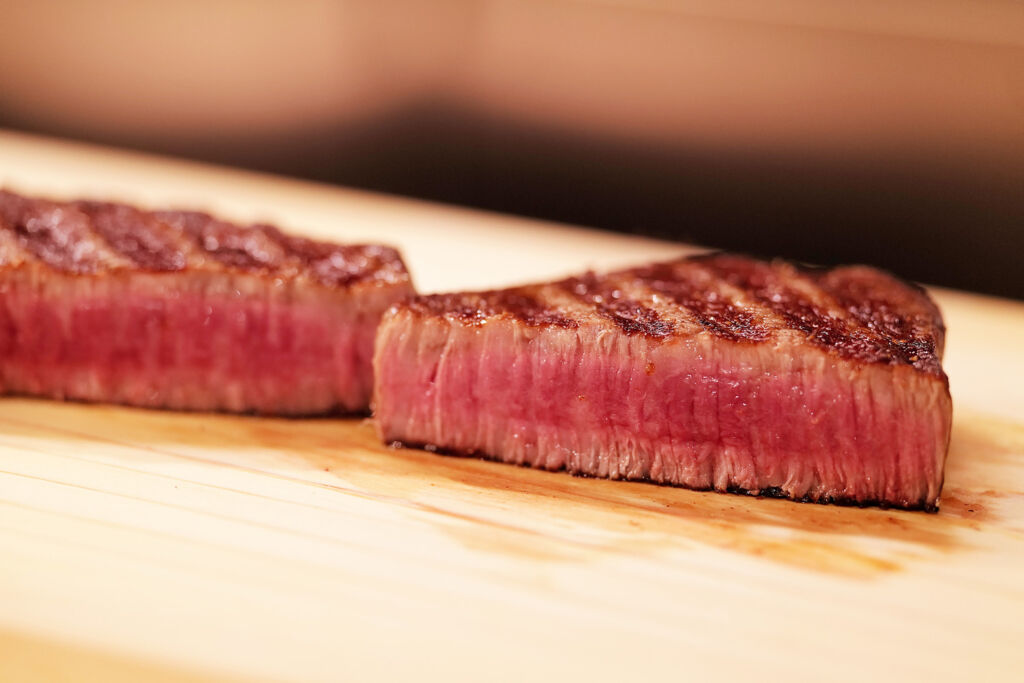 Allowing taste to take centre stage
The designers behind the ANAORI kakugama firmly believe in the basic principles of gastronomy which are simplicity and efficiency. Thanks to the carbon-graphite used, cellular destruction of cooked ingredients is kept to a bare minimum which concentrates their original flavour. As a result of this, regardless of the heat and cooking method, the essence of each ingredient is enhanced. 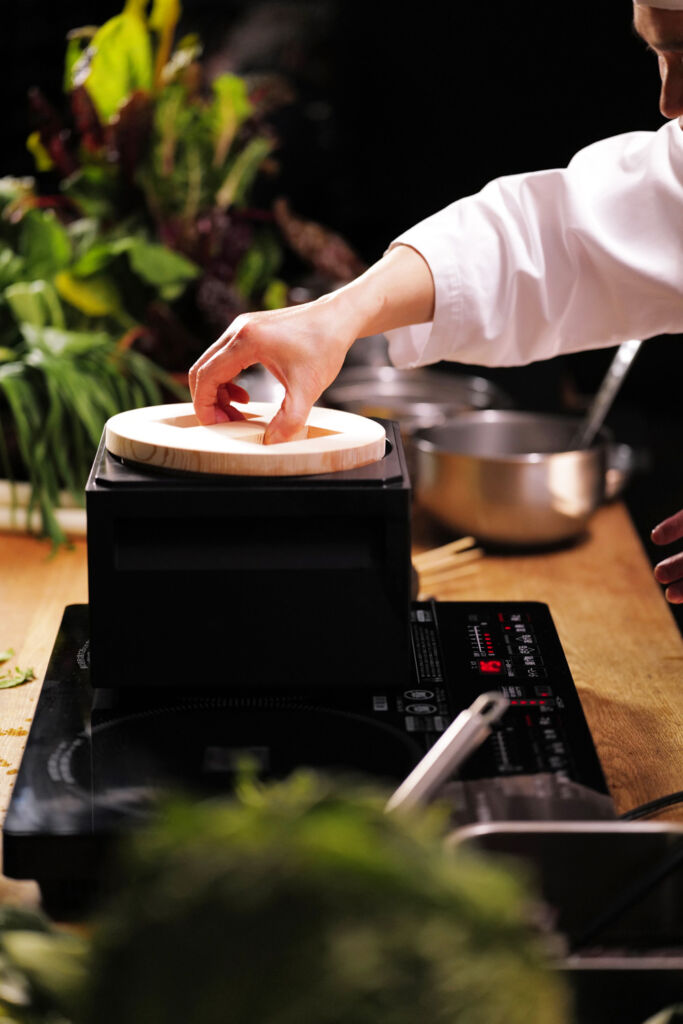 The carbon graphite used in the kakugama is up to five times more efficient compared to cast iron; this is helped even further by the solid cube.

The result of this is heat retention similar to what is achieved when cooking with charcoal.

The kakugama can be used for grilling, simmering, poaching, frying and steaming. And thanks to its dual-purpose lockable lid, it can even be used as a grilling pan.

As I’ve mentioned previously, the kakugama has extremely high heat conductivity properties. This means it can be used with just about every imaginable type of heat source, including gas, electric and induction; and it can even be used inside the oven.

The Naturality Tour: From Soil to Dining
ANAORI is on a quest to unite the global cooking community through its kakugama. To help to achieve this, they have surrounded themselves with world-renowned chefs who share their same culinary philosophy.

Many of these chefs have been awarded Michelin stars and are standard-bearers when it comes to developing new cooking techniques, which then permeate into the world’s leading restaurants.

This ambitious international project, named the Naturality Tour, features 24 impressive chefs over six months. In April, Japan kicks off the Naturality Tour, followed by Australia, the east and west coasts of the United States, South America, then to China and other parts of Asia before arriving in Europe.

For the UK, the reins will be handed to the talented chef Rafael Cagali, a recipient of two Michelin stars just two years after opening his restaurant ‘Da Terra’, based in the Bethnal Green neighbourhood of London. He will be joining the ANAORI Naturality Tour late in the Year (August 2021), where he will introduce a special ANAORI kakugama menu to his clients.

Rafael hailed from São Paulo in Brazil and started his career in London at the age of 21. After spending over three years in Italy, where he worked under Chef Stefano Baiocco at Villa Feltrinelli, he moved to Spain to work with the pioneer of avant-garde cuisine, Chef Quique Dacosta and also for Chef Martin Berasategui of eponymous restaurant Martín Berasategui. Upon returning back to England to work at The Fat Duck by Heston Blumenthal, he joined forces with Simon Rogan to open Fera at Claridge’s.

His incredible talent led him to become head chef at Aulis London, where he showcases his skills via an intimate eight-seater chef’s table and development kitchen. His experimental cuisine is inspired by the flavours of his origins coupled with an Italian heart. It is serendipity that his first solo venture, Da Terra Restaurant in 2019, which means ‘from the earth’, is a tribute to the influences of his background and upbringing. 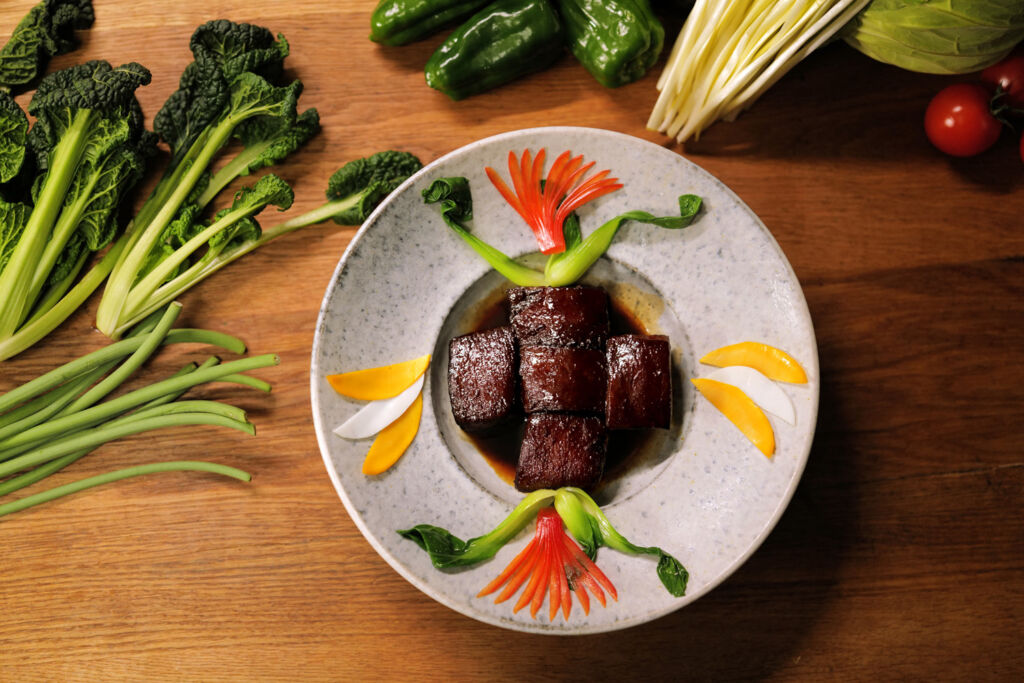 Below are some of the other accomplished chefs who will be partaking in the tour:

Eiji Taniguchi, originally from Osaka and chef of L’évo restaurant in Toyama
After experimenting with several restaurants in Japan and France, he moved to Toyama, a prefecture in the Hokuriku region of Japan, in 2010. In 2014, he founded the French restaurant L’evo’ and was awarded a Michelin star as well as the Gault-Millau Chef of the Year award in 2017. L’evo’s avant-garde local cuisine bypasses the stereotypes of both traditional French cuisine and Japanese cooking using ingredients sourced from the surrounding forests.

Toru Okuda, from Shizuoka, Japan and chef at Ginza Kojyu restaurant in Tokyo
Okuda began his career at the Japanese-style Inn, Kikuya. In 1999, after many years of experience at Tsutaya in Kyoto and Aoyagi in Tokushima, he opened Hanami Koji in Shizuoka and Ginza Kojyu in 2003, for which he was awarded three Michelin stars and two stars for his second restaurant Ginza Okuda. In 2013, the master of kaiseki cuisine opened OKUDA restaurant in Paris and received a Michelin star.

Riku Yakushijin, originally from Ehime and chef of the restaurant Unis in Tokyo
Yakushijin was a French cooking instructor at the Tsuji Culinary Institute for six years. In 2014, he participated in the launch of the exclusive restaurant SUGALABO, where he worked as a head chef. In 2020 and after many experiences as a gastronomic consultant, he moved to the Toranomon district, where he supervised young culinary talents and became chef of the French restaurant Unis. 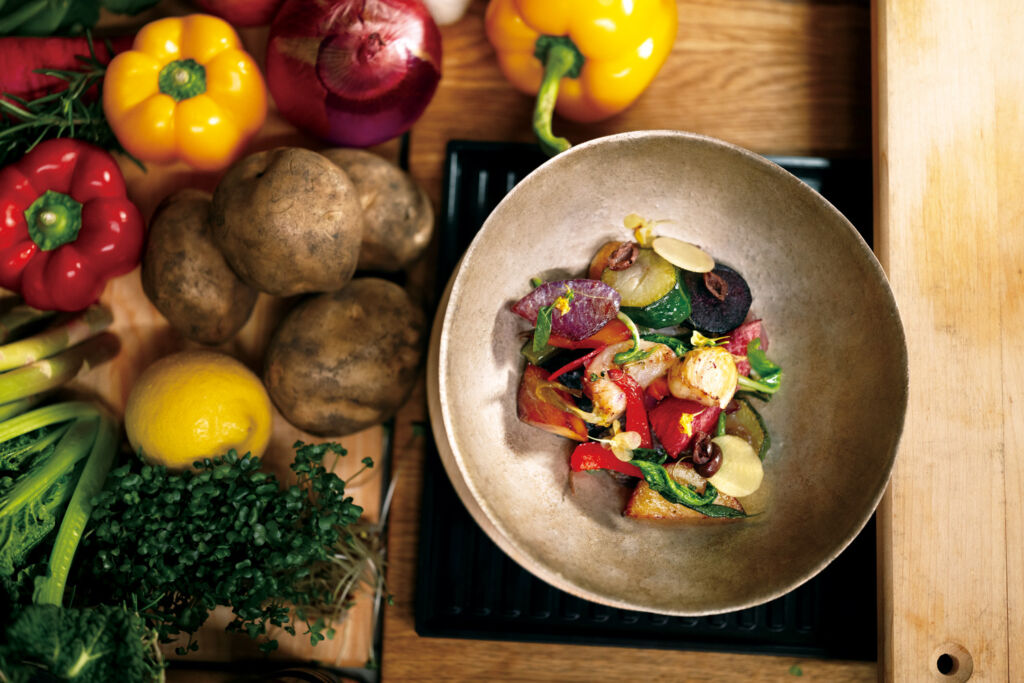 Final thoughts
The ANAORI kakugama has been designed to bring cooks back to basics, where cooking is performed in its simplest form where natural flavours shine without clever manipulation or added flavours. It is a multi-functional cooking product that takes all cooks back to living with nature.