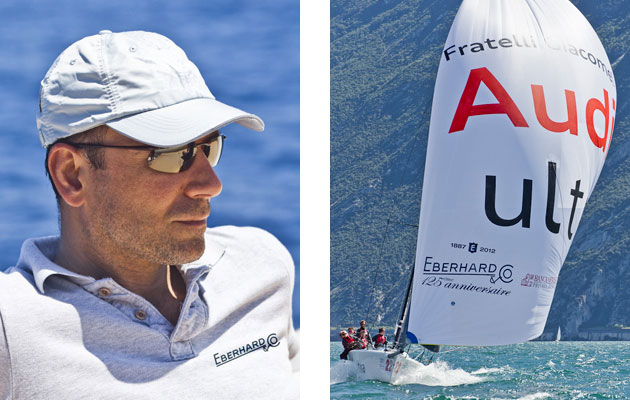 On Garda lake the three racing days have been intense for the Audi-Eberhard Melges 32. Thanks to its undisputed leadership, the boat skippered by Edoardo and Giovanni Pavesio ranked first in the 4th leg of the Audi Sailing Series circuit.

The team, that could count on tactician Gabriele Benussi and mainsail-trimmer Riccardo Simoneschi, has been rewarded by its regularity and ability to stay focused also in the most delicate phases.

“The sailing universe is governed by precise timing, skill, coordination and precision like the watchmaking world”, was the satisfied comment of Mario Peserico, CEO of Eberhard Italia.

“Thanks to these expertise and values we have been able to produce measuring instruments for well over a century, since Eberhard & Co. is celebrating this year its 125th anniversary, a very long history of precision, reliability and technical research that are the strengths of the company and the brand”.

Eberhard & Co. is a partner of Audi Italia Sailing Team, and the 125th Anniversary logo of the Bienne Maison will be proudly exhibited on the sails of the three Melges 20, 24 and 32 for the whole 2012 sailing season. Eberhard & Co. is also the Official Timekeeper of the Audi Sailing Series circuit.

In the general Melges 32 ranking, the Audi-Eberhard team has moved up from the sixth to the fourth place, while ranking second in the Melges 20 category and remaining one of the main protagonists of the Melges 24 class, thanks to the victories obtained in the Austria Cup and Kieler Woche.

After the Malcesine competition, the Melges 32 are now on their way to the finals in Naples, and so will the Melges 20, that will reach the same port after the leg scheduled in Viareggio. Meanwhile, the Melges 24 is getting ready for the season’s main event, the World Championship that will be disputed in Torbole from July 28 through August 4.

The teams that will rank first in the Audi Sailing Series will be awarded two prestigious Eberhard & Co. timepieces.