The all new Bentley GTC Convertible features an even more spacious and sumptuous hand-crafted cabin, with soft-touch leather hides, an extensive range of wood veneers, cool-touch metals and deep-pile carpets, all produced by Bentley’s talented craftsmen and women. Now with a more powerful 575PS 6.0 litre, twin-turbocharged W12 engine as well as a new QuickShift transmission, enabling faster gear changes than ever before.

Alasdair Stewart, Member of the Board for Sales and Marketing, Bentley Motors, said:

“We are delighted to be here in Qatar with the new GTC. It has always been the most emotional model in the Continental range and a showcase for Bentley design. With its tailored soft top, the GTC is a pure British convertible true to those classic Bentleys of the past. However, the technology, performance and overall design excellence invested in this model means that we are now writing a new chapter for the Bentley convertible driver.”

Taking cues from its GT coupe sibling launched last year, the new Continental GTC builds on the highly successful foundation of the previous cabriolet, which premiered in 2006. Bentley’s design and engineering teams have improved virtually every aspect of the iconic convertible with an uncompromising focus on quality. 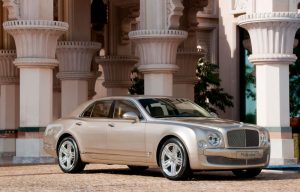 The other featured car at the Qatar Motor Show is the Bentley Mulsanne, which continues to do exceptionally well in the Middle East. The new Mulsanne is a thoroughly modern flagship that captures the essence of the Bentley marque. Elegant yet distinctly sporting in character, it delivers effortless performance from the classic 6.75 litre V8 engine whilst within its sumptuous cabin advanced technology sits discreetly with handcrafted luxury. It represents the pinnacle of British luxury motoring which continues to attract substantial interest in the Middle East with the market now accounting for 15% of global sales.

The Qatar International Motor Show comes as Bentley bounces back to pre-recession levels of demand. Sales were up 37% globally in 2011 to 7003 cars with sales accelerating as the year progressed. December saw 1059 cars delivered to customers (up 69% on the same month in 2010), the best month since Bentley’s pre-recession record of 2007 and the second best month ever.

The Middle East region remained stable – a positive outcome considering the Arab Spring affected confidence at the beginning of the year. Sales recovered throughout the year, however, with record monthly sales from June through to October resulting in an annual increase of around 3% to 566 cars sold – the second highest year for Bentley sales in this region. Qatar retained its position as the third largest market in the Middle East with 70 cars sold during 2011.

Sales growth was led by strong demand for the new Continental GT and the Bentley Mulsanne – for which the Middle East remains one of the most important markets in the world. Demand for these cars is expected to continue in 2012 and, with the arrival of the new GTC, double digit growth should be maintained.