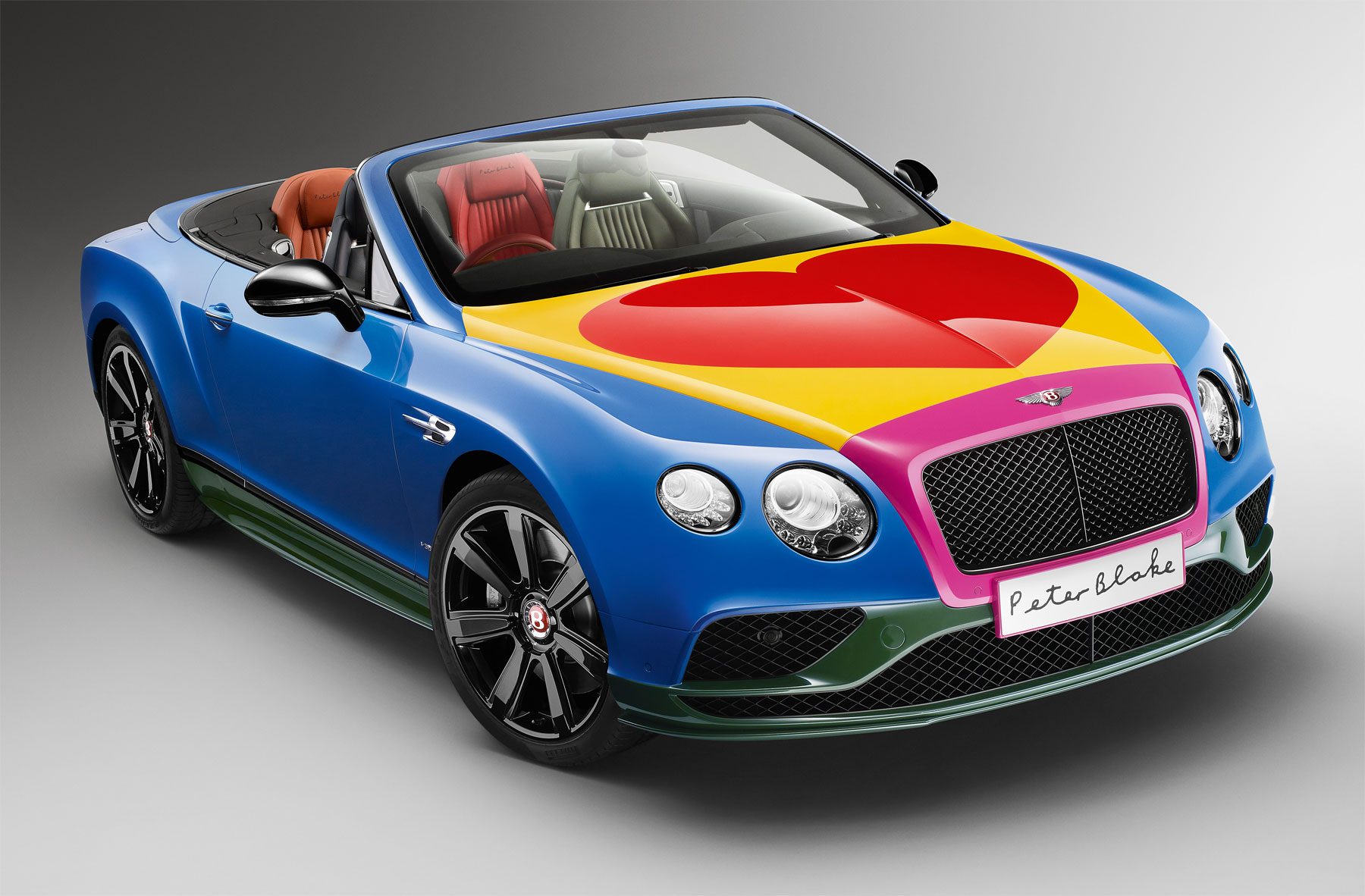 The car will be auctioned at the Goodwood Festival of Speed on June 24, with all proceeds donated to the Care2Save Charitable Trust, which provides palliative and hospice care around the world.

Knighted in 2002, Sir Peter has also produced iconic album covers for the Beatles, Paul Weller, The Who, and Oasis, with his work represented in major collections throughout the world. He also commands respect from younger artists such as Damien Hirst, Gavin Turk, Pure Evil and Tracey Emin.

Chatting briefly with Sir Peter at the Bonhams unveiling, the sprightly and engaging Godfather of British Pop Art, now 84, is clearly delighted to be here:

“Yes, I am very excited to be involved with Bentley on this project,” he tells me. “When they first asked me to create a new design, though, I told them I didn’t want to mess up such a beautiful car!”

“I have enormous admiration for the people at Bentley who brought my design into being, to produce this one-off lovely car. And especially their great work with the Care2Save charity.”

The eagerly awaited unveiling of the Bentley draws a resounding appreciation from the assembled gathering – a mix of automotive and art world, press and even, as I discovered, Bentley fans from Darkest Peru. 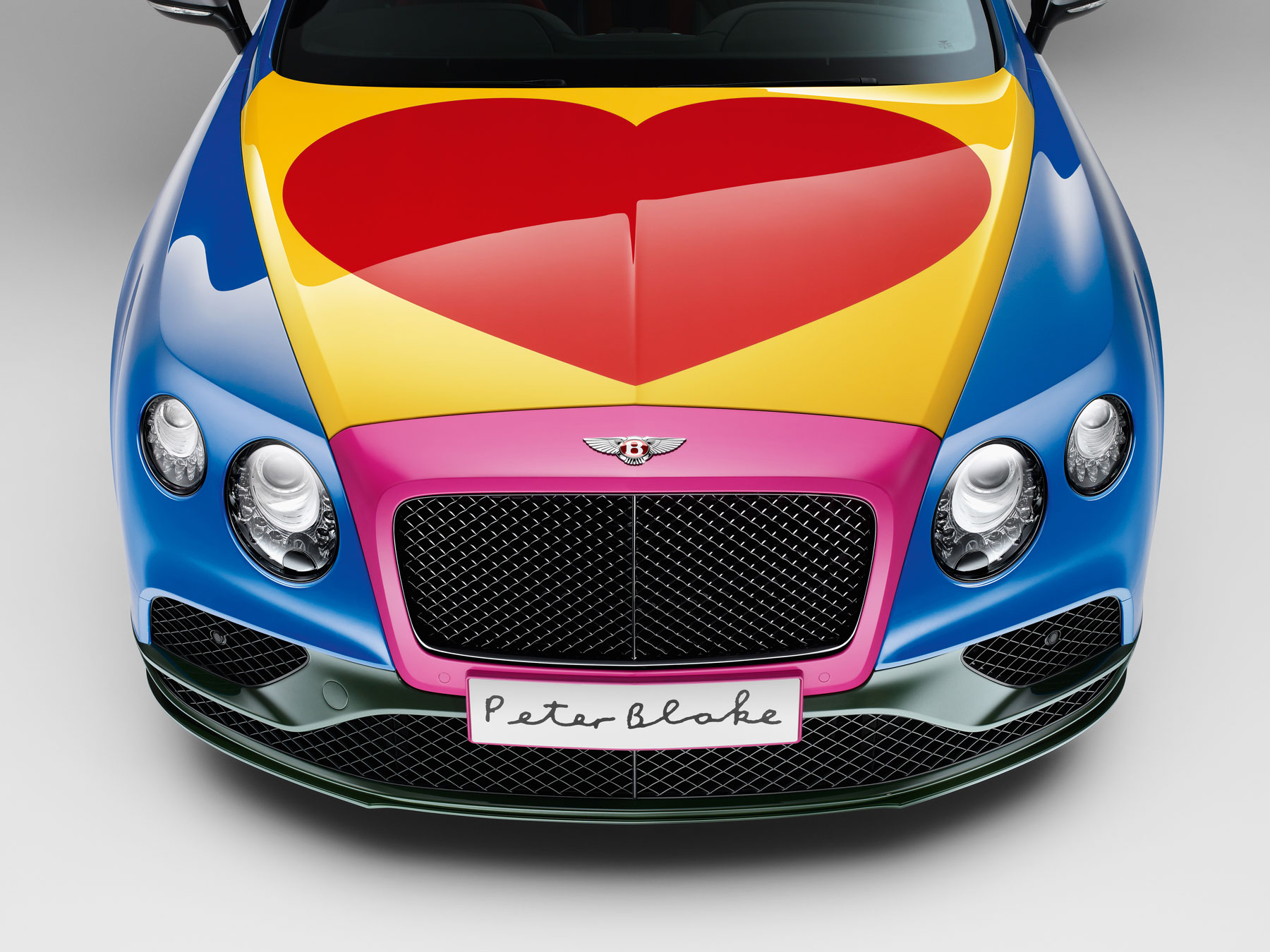 The reveal shows the iconic hand of the Godfather of British Pop Art: this handsome GT is a brilliant St Luke’s Blue – a bespoke colour from Sir Peter in homage to St Luke’s Cheshire Hospice in Crewe (North of England), which Bentley has supported for the last 28 years. The colour dominates the car’s rear haunches, doors and boot lid, while the GT’s most striking feature is its bright Continental Yellow bonnet with Sir Peter’s trademark St James Red heart motif.

As Sir Peter obligingly sits at the wheel, I get a closer look at the beautiful hide seats – each trimmed in different colours (Newmarket Tan is my favourite). His signature is embroidered on all four seat headrests as well as the fascia panel. The gorgeous colour variations continue into the sports steering wheel while the vivid pink leather gear lever is a fun addition to the cockpit and gives a startling contrast to the Piano Black dash, console and interior door panels.

Bentley is renowned for its superb craftsmanship, especially the skilled artisans in its bespoke Mulliner division, who worked closely with Sir Peter to bring this design to life.

The Sir Peter Blake design, which also includes a personalised playlist from the artist’s favourite music, is the second Bentley Continental GT Bentley is donating to the Care2Save Charitable Trust.

Reinforcing the importance of such initiatives to palliative and hospice care support, Andrea Ladeira, CEO of Care2Save, said:

“Bentley has supported its local hospice every year since it opened 28 years ago. In turn, the hospice has given love, support and comfort to hundreds of people and their loved ones who are connected to Bentley. It is this excellent care, which needs much-needed funds on a wider scale, seeing hospice and palliative care across the UK and globally benefit.

“The end of someone’s life should bring dignity, love and comfort both to the person who is dying and all those who care about them. We hope that this amazing car will deliver a lasting legacy of care. Without the dedication of Bentley colleagues, none of this would be possible.”

Kevin Rose, Bentley’s Member of the Board for Sales, Marketing and Aftersales, says: We have proudly supported the Care2Save Charitable Trust and the hospice movement for more than 25 years and so take great delight from donating this inimitable car for such a worthwhile cause.”

Bentley By Me campaign – Where and how

More information on the Bentley By Me campaign can be found at www.care2save.co.uk/bentley.