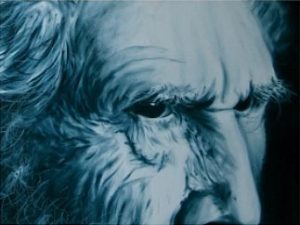 Bobo Ivancich de La Torriente (Contemporary)
Ezra Pound ‘Dittico’, Head study; with another matching similar Two works, each painted circa 2004.
Each signed and inscribed on the reverse
The works are Oil on canvas
Each measuring 45 x 65cm, together with the original exhibition catalogue.
Both of these stunning works are in excellent condition, unframed. The pieces are owned by Paul Godbold, the founder of Luxurious Magazine.

Bobo Ivancich de la Torriente was born in Venice in 1963, the heir of a noble Italian-Cuban family. The family was very close to prominent artists of the period including Ernest Hemingway and Ezra Pound – with whom Bobo played chess as a child – characters that appear frequently in Ivancich’s paintings alongside Hollywood friends of his, such as Quentin Tarantino and Jude Law. “Enfant prodige” and at the same time “Enfant terrible”, Bobo started painting at an early age, after seeing his fellow countryman, the painter Wilfredo Lam at work. As a child, Bobo often visited Peggy Guggenheim’s home before it become the contemporary Venetian Foundation and the Venice Biennale of contemporary art. Peggy was a dear family friend and Bobo lived in Venice at Palazzo Barbaro, where Peggy and the American painter Sargent had also lived. When Bobo was just 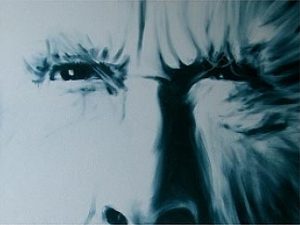 eighteen, his works were bought by the American Lambert Collection; later his works were sold to some of the most influential collectors in the world including such families as the Getty’s, Rosekrans, the Cipriani and the Versace family. A major influence in Ivancich’s creative life was his long friendship with the great Italian master Gino De Dominicis, of whom he is considered his protegè and “erede spirituale”.

The iconic artist Andy Warhol spoke of Mario Schifano as the best Italian artist and Mario Schifano said of Bobo Ivancich, “He is more of an artist than me!” An eclectic artist, in his early years, Ivancich found his major expression in abstract work and “performance” art, then in conceptual works, turning lately to hyper-realism and digital art. Bobo Ivancich de La Torriente lives and works between New York and Venice.

About the Bobo Ivancich de La Torriente Ezra Pound Studies
From the depths of bottomless surfaces, Bobo Ivancich allows the signs of a summons to emerge. Seeking a graphic mode governed by shadows that gather the signs together and compose them on the canvas, he unrolls the continually broken thread of a story that secretly links up the order of painting (tempus tacendi) with another order: that of speech and writing (tempus loquendi). “It is difficult to stay in the center”. Both for the poet and for the painter.

The language hidden behind Bobo Ivancich de La Torriente’s brushstrokes allows the mask of that summons to emerge gradually: Ezra Pound. Ego scriptor. An affiliation that binds painting to poetry, two orders ready to generate an image that “speaks” an unknown language (perhaps Phoenician), allowing its timbre to resonate and laying the way for a pageant of memories that advances into the vortex that governs the primordial time of an inaccessible verticality. The obsession of that craggy face is perceived as one loses oneself within it. Beyond the point of its  disappearance; in the bewilderment of time, in the loss of the body in water (of Venice? of the Island of San Michele?), as Confucius teaches, that portrait stands guard by the black Goyas, Bacons and Burris. 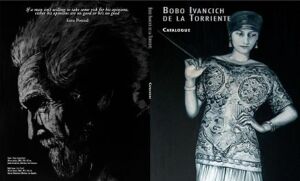 It is pigment, in which lies hidden the very fate incarnating the Homeric word of Pound. Beyond the visible and the decipherable, beyond what is prohibited and what has disappeared, here too gapes the silence of “transparent abysmal depths” on the fixed mirror, from which emerges the tracery of the tremendous and luminous profile. The light in the darkness of bobo ivancich‘s painting draws shadows and winds around that icon. Its steady insistence recalls the constitutional solitude of painting, the whim of the sign that swallows its own self, self-devouring; the effort to reveal the visible from the invisible; what is said from what is unsaid and unsayable, the intact space of paradise from the ruins. Having marked out the space of the summons (certainly far beyond the borders of the canvas) the figurative event concentrates on a body, held between the dilated space of the image and the dessicated time of the word: energies that hold the secret of the drama and truth of the 20th century. Having wholly entrusted himself to the authenticity of this transfiguration, Bobo Ivancich allows himself to be overcome by a form of painting that is not only valid as an act of remembrance but which constantly testifies to the synchrony with a thought and a summons that take place today in the atrophy of this post-human postmodernity, which is forever projecting the boredom of its own agony into the beyond (or into the end).