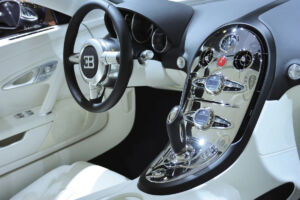 Dubai, Bugatti Automobiles S.A.S. finishes its Centenary celebrations with three tailor made cars, especially developed for its discerning clientele in the Middle East: the Veyron “Sang d’Argent”, the Grand Sport “Soleil de Nuit” and the Veyron “Nocturne”, limited to five cars only.

The “Nocturne” – a special Veyron five car edition exclusively for the Middle East Market
The Veyron “Nocturne” strikes with an extraordinary partition of surfaces never used so far, giving the car a new dimension of lateral length. Bugatti is experimenting with galvanized side windows continuing the line of the polished aluminium upper body parts to the rear of the car and contrast vividly with the uni black of the side- and door-panels and the roof. Added to that is the hood, also covered in polished aluminium which emphasizes this impression of elegant length. Special polished custom rims at the exterior and a futuristic interior dominated by a black nanocoated magnesium dashboard and a centre console in galvanized Platinum complete this unique combination of individualized modern design.

“Sang d’Argent” and “Soleil de Nuit” – two dreams for 1001 nights
The two-tone-scheme of the Centenary Villa d’Este cars were at the origin of the “Sang d’Argent”, a one-off Veyron version built exclusively for the Middle East. But the country coded coloured parts of the car have now been changed to a subtle silver metallic which discreetly flows into the lines of the polished aluminium parts – doors and front wings – thus enhancing the “silver theme” of this car; yet another unique Bugatti creation celebrating the 100th anniversary of the brand. The “Sang d’Argent” has the Grand Sport rims, they complete together with the air intakes on the roof the overall silver appearance. Through the windows shines a differentiating Havanna interior with quilting pattern on seats and saddle and other very personalized items emphasizing the unique features of this very special Bugatti.

The “Soleil de Nuit” – Sun of the Night – is another stunning example of how a modern interpretation of Bugatti’s core values “Art, Forme, Technique”: A very unusual colour/material split characterizes the “Soleil de Nuit”, the second Middle East one-off model created for the Dubai Motor Show. The horizontal split in the lower part of the car – a synthesis of polished Aluminium, painted Black Blue Metallic enriched by mirror shine meshes – softens the lines of this Grand Sport and gives the body a new touch of sportiness. Blue Metallic in the upper body parts and also in the inner side of the (“Sang Noir”) rims, the outer side of which are in diamond cut, underline the exquisite appearance of this dramatic looking car. A strong burnt orange interior crowns the attractiveness of this impressive “Soleil de Nuit”.

The cars will be available for delivery in the first quarter of 2010. Their prices range from 1.65 Mio Euro for the five car series of the “Nocturne” to 1.45 Mio Euro for the “Sang d’Argent” and 1.55 Mio for the “Soleil de Nuit”, the Veyron and Grand Sport one-off models. All these models are a visible proof of how creativeness and inspiration can be successfully driven to new limits. Bugatti’s constant strive for new technology, more power with less weight, more
innovative design aiming for improved speed, easier handling and more inspiring elegance has become legendary. Bugatti’s sophisticated individualization and personalization program has opened new opportunities for the creative and discerning customers found in the Middle East. New materials have widened the range of personalized options and have led to combinations and applications of different varieties of high tech elements never seen before. Thus Bugatti chose the Dubai Motor Show to present these new combinations the first and only time to a broader public.

100 years later the Bugatti brand is well established again
Honouring the foundation of the company in 1909 Bugatti Automobiles S.A.S opened the anniversary with a one-off version of the Veyron, the “Bleu Centenaire”, at the Geneva Motor Show in March. At the Villa d’Este weekend at the end of April the company paid tribute to Bugatti’s racing history – which was to a great extend responsible for the worldwide reputation of the brand – with four very special Grand Sports, accompanied by their respective Type 35 predecessors, all featuring the traditional racing colours representing France, Italy, England and Germany, namely blue, red, green and white. Bugatti was then one of the honoured marques at the Pebble Beach Concours d’Elegance in California in August and highlighted the event with the presentation of the “Sang Bleu”, a one off Grand Sport in a breathtaking and unique carbon – aluminium combination. The “100th Anniversary Weekend” in Molsheim in September was the platform for a glimpse into the future which might look like the Bugatti 16 C Galibier concept – intended to be the most exclusive, elegant and powerful four door automobile in the world.

The presentation of these very special cars at the Dubai Motor Show is the final highlight, with which Bugatti ends its Centenary celebrations. We are honoured to complete our 100 Years at this prestigious Motor Show of a very important market for Bugatti.