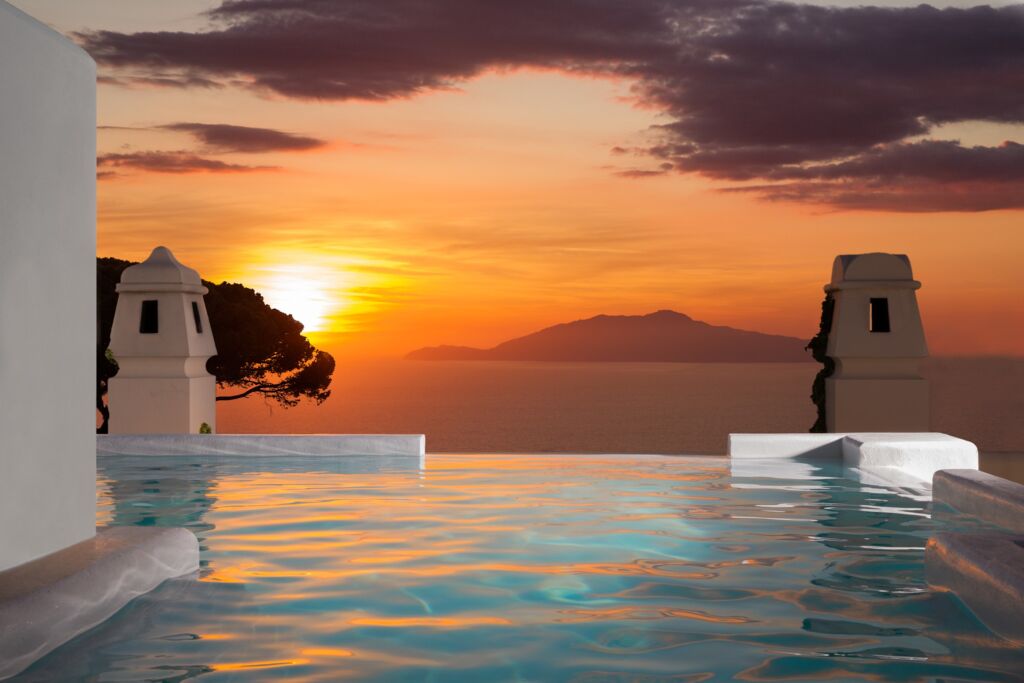 Jumeirah Group has announced it has been appointed to operate and manage the renowned Capri Palace in Italy.

Reopening as Capri Palace, Jumeirah in April 2020, this beautiful Italian property enjoys an idyllic location in bustling Anacapri, one of the most unspoiled parts of the island. The hotel, founded by Tonino Cacace, stands high up on a hill overlooking the Gulf of Naples and fully embodies the Italian Dolce Vita; with an authentic Capri style and far-reaching sea views.

Designed in the style of an eighteenth-century Neapolitan palazzo, Capri Palace has attracted the great and the good since it first opened its doors in the 1960s, swiftly establishing itself as the island’s most iconic hotel. Under Jumeirah’s direction, the property is set to continue to go from strength to strength with exciting upgrades and refurbishments in the pipeline.

Art and design are at the heart of this hotel; and the elegant white-washed walls, arched ceilings, and columns create a sense of serenity as soon as guests step through the door. The light and airy interiors are filled with historical and contemporary artwork with tributes to the works of Mirò, Magritte and Warhol.

The reverence for contemporary art continues in The White Museum collection, dispersed throughout the hotel, which recounts the spirit of Anacapri and includes pieces by De Chirico, Keith Haring, and Pomodoro, amongst others.

The tasteful interiors of the open spaces flow into the 68 guest rooms. White, blue and neutral tones create an unmistakably Mediterranean atmosphere, while the ceramic tiles and bespoke furniture evoke the sense of an Italian family home, ensuring guests are well rooted in their surroundings.

In line with Jumeirah’s commitment to offering exceptional culinary experiences, Capri Palace, Jumeirah is home to three of the island’s Michelin stars. The hotel’s signature restaurant L’Olivo, which serves Mediterranean classics with an extensive wine list, has been awarded two stars; while Il Riccio- the hotel’s private beach club- has one, and is the only beach club in the world to do so.

Il Riccio, which clings to the rocky coastline, is known for providing some of the best local seafood on the island, especially their sea urchins from which the restaurant takes its name.

Capri Palace, Jumeirah is also revered as a wellness destination, with the exclusive Capri Beauty Farm upholding a loyal international following. Under the direction of the esteemed Professor Francesco Canonaco, this world class-medical spa facility- on the cutting edge of medical research- offers highly specialised signature treatments including the ‘Leg School®’ and the ‘Metabolic Response’ which have won acclaim the world over.

José Silva, Chief Executive Officer of Jumeirah Group, commented: “We are proud and excited to welcome Capri Palace, Jumeirah into our portfolio. It is one of Europe’s most recognised and well-respected hotels, with a global reputation and following.

We are pleased to announce that the hotel’s current General Manager Ermanno Zanini will continue in his role, taking on additional responsibilities as Regional Vice President for Italy and Spain for Jumeirah Group. Capri Palace, Jumeirah embodies our brand values of providing excellent service, unrivalled culinary experiences and inspiring design, and joins our existing collection of European properties in London, Mallorca and Frankfurt.”

Ermanno Zanini, General Manager of Capri Palace, Jumeirah and Regional Vice President for Italy and Spain said: “We are delighted that Jumeirah Group has embraced Capri Palace to be a part of its portfolio. With the warmth of our team, the big smiles and the even bigger hearts, we look forward to building on greatness and reach new frontiers as part of this renowned global luxury hospitality company.”

Capri Palace, Jumeirah will open for the 2020 season on April 23, 2020, bringing the existing Jumeirah international portfolio to six hotels in Europe, including Jumeirah Frankfurt, Jumeirah Port Soller, Jumeirah Lowndes Hotel, Grosvenor House Suites Jumeirah and The Carlton Tower, Jumeirah. In addition to the group’s portfolio of hotels in the Middle East, Jumeirah further manages hotels in China and Maldives with additional properties planned for 2020 in Indonesia and Oman.