Chef Roland Schmid, the 2011 Swiss Chef of the Year, will be indulging Lufthansa passengers in First and Business Class with his creative dishes in the months of July and August.

It is his blend of traditional Swiss cuisine and modern creations that sets apart Chef Roland Schmid who will be Lufthansa’s Star Chef in the coming two months. For several years now, as Chef de Cuisine at the Abtestube gourmet restaurant in Bad Ragaz in Switzerland, Chef Roland Schmid has been winning over his discerning guests with his modern take on traditional Swiss cuisine based on the use of locally sourced, natural products.

What culinary delights can the passengers expect from Chef Roland Schmid

As amuse-bouches in First Class, Chef Roland Schmid has created a mille feuille of air-dried Grison beef and Alpine cheese with fig chutney. Starters include king prawn confit with strawberry salad and green pepper; jellied veal with chervil, snow pea salad and lime vinaigrette; and zucchini and bell pepper terrine with basil sour cream. As a main dish, there is a choice of medium-rare saddle of lamb with a Gorgonzola cheese and herb crust, vegetables au gratin and potato blinis; Pizokel (Swiss-style noodles) with mushrooms, Savoy cabbage and Appenzell cheese sauce; and pigeon strudel in port sauce served with broccoli and mashed Jerusalem artichokes. The Lufthansa Classic dish in July is fillets of trout meunière with almond butter and potatoes, and in August fillets of sole a la Florentine with sauce Mornay, leaf spinach and potatoes. As a dessert in First Class there is a choice of cold elderflower soup with mixed wild berries and cassis sorbet or Chef Roland Schmid’s chocolate dream: pave, sorbet and port chocolate sauce. For those passengers who would prefer a more substantial dessert, there is a cheese creation from St. Nectaire with Appenzell cheese, Roquefort, Fougerus and Tête de Moine with fig mustard, white and black grapes and pecan nuts. 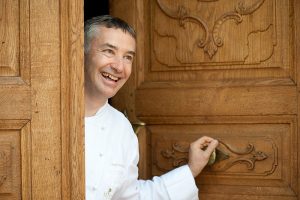 Business Class passengers can also look forward to a range of Swiss delicacies. There is a choice of starters, including pike terrine wrapped in carrots, trout tartar, kohlrabi salad and parsley creme fraîche and Appenzeller Mostbrockli (a Swiss beef speciality with melon and chanterelles). As a main dish, passengers can choose fried cod on lemon sauce with spring onions, orange segments and mashed green peas or Alplermagronen (macaroni and potatoes with Alpine cheese) served with apple wedges and fried onions. The Lufthansa Classic menu in July features sliced veal in cream and mushroom sauce with Swiss pasta and vegetables, and in August, Hungarian beef goulash, summer vegetables and butter noodles. To follow, a classic Swiss dessert – Rublikuchen (carrot cake) – rounds off the Business Class menu.

On some flights to North and South America, our Business Class passengers can also look forward to a “Special Moment” – a typical Swiss snack in the form of a miniature rucksack filled with gourmet nibbles such as veal meatballs and Landjager (air-dried sausage) with mustard, cheese salad, radish and apple, farmhouse bread and butter and – on a sweet note – Swiss chocolate.

After completing his apprenticeship as a chef in Bulach in Switzerland, Chef Roland Schmid ventured further afield, gaining experience working at some of the top restaurants in the gourmet world, including the Palace in St. Moritz, the Giardino in Ascona and Mosimann’s in London. He also worked under star-studded chef Harald Wohlfahrt in Baiersbronn. Meanwhile, Chef Roland Schmid has gained a strong reputation for his own refined style of cooking, which has earned him 17 Gault Millau points. However, he has stayed true to his roots and since 2003 has been developing his creative talents at the Abtestube in Bad Ragaz in Switzerland. Chef Roland Schmid sets himself the highest standards for his own creations. In all his dishes he only uses top-quality regional produce and animal welfarefriendly products.

Berries: Could these Powerful Little Fruits Prevent and Manage Illness in Kids?