Coming up from UK auctioneers Duke’s on the 19th May 2011 are a collection of treasures and Art from the Chinese Summer Palace. The sale will consist of 82 lots.

Highlights of the 19th May Chinese Treasures and Art auction include: A FINE GEORGE III GOLD, ENAMEL AND DIAMOND-SET WATCH made for the Chinese market, signed ‘William Anthony, London, no. 1751’.
Believed to have been given as a tribute to the Emperor Qianlong by the English Royal Family during the reign of King George III, but it post-dates the Macartney Embassy to Beijing of 1793 by three years. The Emperor Qianlong was well known for his passion for European works of art and his particular fondness for watches, which he considered amongst his most cherished possessions.

The exterior of the case set with a central rose-cut diamond within a border of diamond-set leaves with diamonds between, on a damascened blue enamel ground and enclosed by subsidiary enamelled border picked out in duck egg blue, red and white, the outer border set with two bands of seed pearls and the suspension loop with conforming decoration, the white enamel dial with a sweep seconds hand and Roman numerals in black with Arabic numerals 15, 30, 45 and 60 at the quarters, enclosed by a double border of seed pearls, London 1796, 95mm, together with a key enamelled with a young girl with a bird in a basket on one side and a kneeling boy on the other, in a fitted case. Provenance: The Summer Palace 1860. The interior of the watch with an inscription indicating that it was acquired by Captain James Gunter of the Kings Dragoon Guards in October 1860. William Anthony (1765-1844) worked in Red Lion Street, St. John’s Square, Clerkenwell, and specialised in watches for the Chinese market. This example is particularly magnificent and on a large scale. 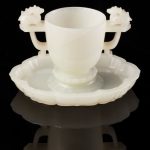 AN EXCEPTIONAL CHINESE “WHITE” JADE CUP AND SAUCER, the cup with scroll handles surmounted by recumbent stags and the body finely carved with a band of pendant tassels around the rim, the saucer in the form of a lotus with a raised central section carved with a shou emblem and the rim with a key pattern border, the stone of pure and even tone and with a lustrous polish, Qianlong. The saucer 5.25” wide and the cup 4.5” across the handles. Provenance: The Summer Palace. Captain James Gunter of the Kings Dragoon Guards, who was in command of G Troop in China in 1860 and thence by descent. This exquisite cup and saucer may be compared to a similar example in the Qing Court Collection illustrated as plate 106 in ‘The Complete Collection of Treasures at The Palace Museum’, Jadeware , published in Hong Kong in 1995. The stag symbolises longevity and is said to be the only animal capable of finding the sacred ‘Fungus of Immortality’. In Chinese art the deer is depicted with court officials and it is said that this signifies a wish for fame, recognition and a long successful career. 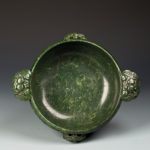 A MAGNIFICENT CHINESE “SPINACH GREEN” JADE BOWL of exceptional proportions, the body carved with a continuous band of branches of peaches and blossom inhabited by bats and with two bosses carved with a bat swooping above two peaches attached to a leafy branch, the projecting handles with fruit and blossom and ring-drop handles, the stone of even tone with attractive lighter cloud-like markings and a lustrous polish, 17th/18th century, 14.5” across the handles, on a hardwood stand. Provenance: The collection of Sir Kenneth Matheson. Exhibited: Illustrated in a Spink & Son Exhibition catalogue.