“Christie’s ability to curate and offer sales of art to a growing audience has led to continued demand across geographies, collecting categories and at all levels.  This is a very encouraging set of results”, said Steven P. Murphy, Chief Executive Officer, Christie’s.  “While we are seeing more investors collecting, there are many more collectors who are increasing their investment in their collections as the explosion of interest in art, fuelled by globalization, facilitated by the technology that increases access to information and images, meets the art that is coming to the market.” 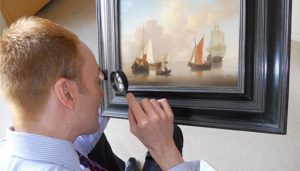 The international appetite for collecting is also reflected in increased buyer activity in 2011.  US and European clients accounted for 77% of sale registrations, with 13% from Greater China, an increase of 2% on 2010.  Registered clients from Russia and the CIS increased 15% over the year.  New clients represented 12% of the value of global sales.

Christie’s continue to invest in online initiatives making the art market increasingly accessible.  In 2011, online continued to attract new clients and prompt greater interactive engagement.  The website, www.christies.com, welcomed 77% more unique visitors than the previous year.  In total 29% of Christie’s bidders transacted online (not including the online-only auction of the Elizabeth Taylor Collection). Christie’s LIVE™, the interactive online bidding platform, drew 25% more bids than the previous year and with two works of art selling for over $1 million.  As part of the sales series dedicated to the Collection of Elizabeth Taylor, Christie’s held the company’s first ever Online-Only sale which ran in parallel to the live auctions at Christie’s New York. The two-week time-based auction was hugely successful with over $9.5 million in total sales and bidders from 25 countries around the world who competed for 973 additional items from Miss Taylor’s personal collection. In total, more than 57,000 online bids were received, as collectors rapidly drove prices from the $50 starting point up into the thousands.

“We are operating in an informed market with pricing, curation and presentation key to success”, continued Steven P. Murphy.  “Christie’s goal is to serve its clients. As we continue to see strong auction sales, we are also responding to the wishes of our clients with Private sales growing and accounting for £502 million of our sales total.  Collectors also continue to be inspired by the great collections.  We saw intense interest in the Gourdon Collection in Paris, the Norton Collection in New York and the Cowdray Collection in London in particular, all attracting a broad audience. The crescendo of the year was the Collection of Elizabeth Taylor which was seen by 58,000 people in an eight-city tour before being sold at auction in New York in December.  With bidders from 36 countries, every one of the 1,778 lots found a buyer contributing to total sales of $157 million.

“As we approach the sales over the next fortnight in London, we are optimistic about the market in 2012.  We also remain committed to our role as cultural stewards through our auctions, private sales and exhibitions.  Christie’s is a unique place where commerce and connoisseurship is the hallmark of the Christie’s team and we look forward to an exciting series of upcoming sales, exhibitions and partnerships.”