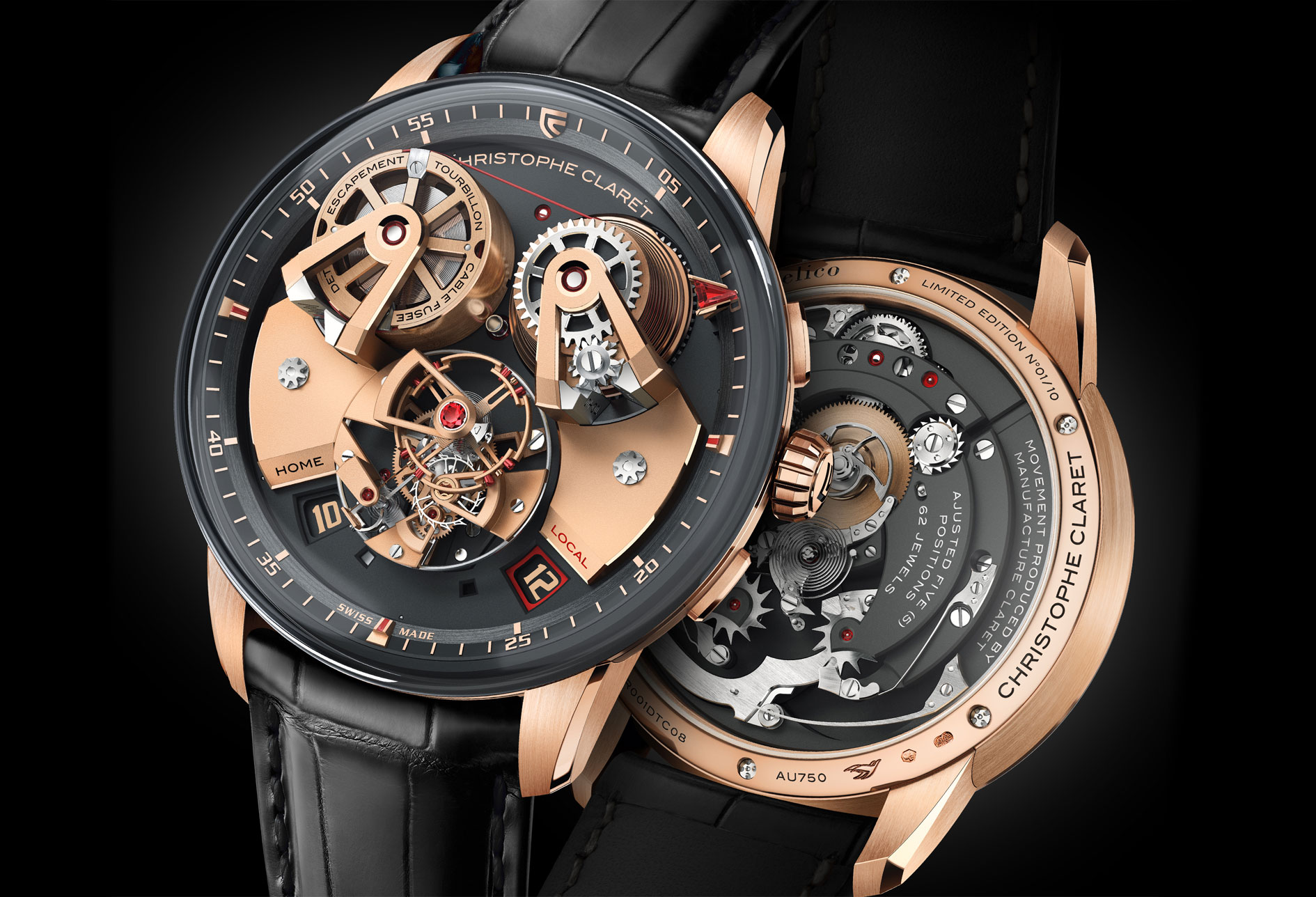 The Angelico model is a contemporary tribute to the quest for absolute precision embodied by the 18th-century marine chronometers. For the very first time in a wristwatch, Christophe Claret has taken up the challenge of combining a tourbillon with a long detent escapement with a cable-type fusee transmission system. This mechanical feat broadening the horizons of traditional horology is complemented by an instant-jump dual-time display complete with day/night and 72-hour power-reserve indications.

Named after Italian Renaissance “painter of angels”, Fra Angelico, this timepiece celebrates the noble pedigree of the watchmaking art. An art that deserves a capital A: truly “Art for Art’s sake”, according to Christophe Claret.

A majestic embodiment of the traditional watchmaking art 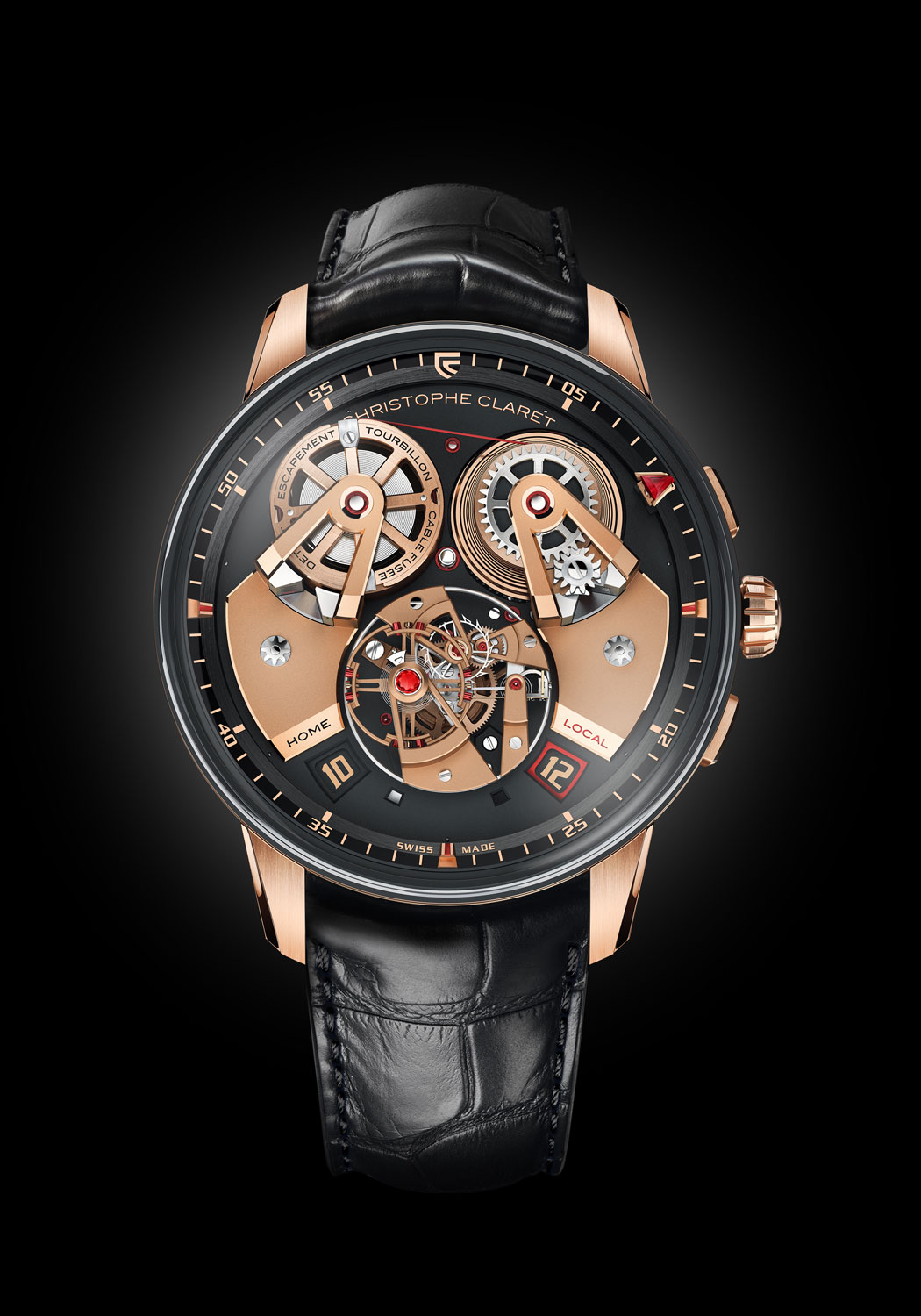 Successfully equipping a wristwatch with a tourbillon featuring a traditional long detent escapement, a mechanism originally designed to operate in a perfectly stabilized position, is an authentic challenge taken on by the watchmakers of the “Soleil d’or” Manufacture. Regarded as the quintessence of chronometric precision, this type of detent escapement first appeared in the 18th century, at a time when watchmakers were competing to create a time-measuring instrument of maximum precision, serving to determine a ship’s exact geographical position at sea. Incorporated into marine chronometer mounted on gimbals, this mechanism demonstrated exemplary reliability in long-term navigation – its only weakness being extreme sensitivity to lateral impacts, which is incompatible with the all-important sturdiness required for wear on the wrist.

As a true chronometry purist, Christophe Claret has once again taken the most complex path by choosing to equip the Angelico watch with a long detent escapement. To prevent the detent from turning over, an anti-pivot cam, integral to the sprung balance, works in conjunction with the safety finger. This fabulous mechanism, whose reliability had already been demonstrated in the Maestoso watch, is fitted for the first time in a tourbillon.

To cope with the risks of over-banking, a flexible thrust bearing fitted on the wheel and connected to the balance absorbs any excess energy. Once again, the challenge is among those that only a rare few virtuoso watchmakers are capable of meeting.

Enthroned at the heart of the Angelico watch, the tourbillon performs its stately dance involving one full turn in six minutes, in order to reduce the impact of its inertia. Christophe Claret has focused on two materials renowned for their lightness: the carriage is made of titanium and the bridges from aluminium (316AL). The choice of a large 16mm cage diameter provides ample scope to admire the beauty of the detent escapement, a rare mechanical sight exercising a powerful fascination. 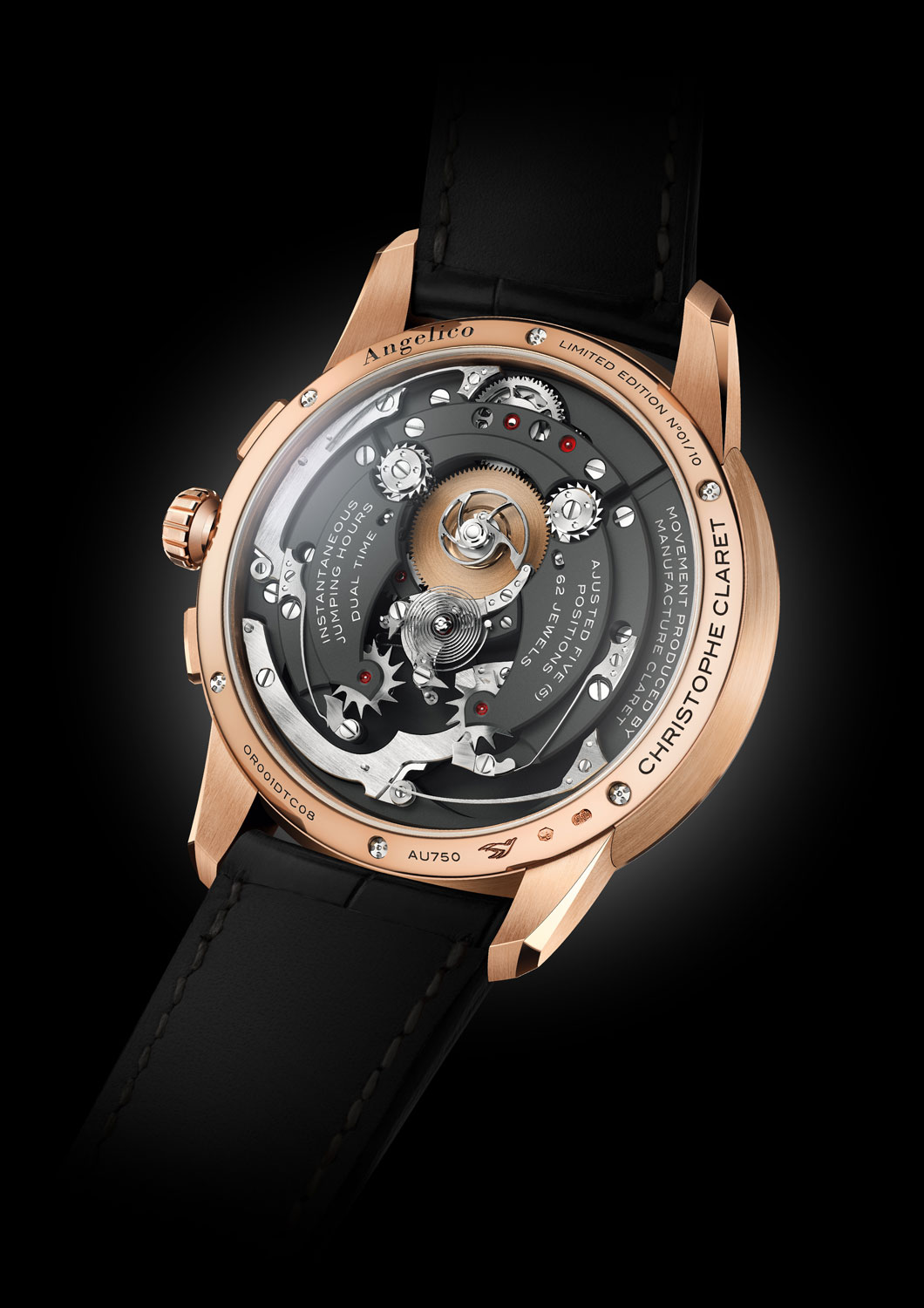 Chronometric (precision timing) performance is an endless quest, as well as an ambition and a passion. All three of these forces drive the creation of each of the watches developed, designed and assembled since 2009 within the Manufacture Claret. In addition to the tourbillon with detent escapement unveiled at the heart of the Angelico model, it is also endowed with the constant force delivered by the cable-type fusee transmission mechanism linked to the double mainspring barrel. Traditionally equipped with a chain, this device, developed to ensure a constant supply of energy to the movement, once again demonstrates Christophe Claret’s capacity for innovation. Instead of the chain, whose design is based on the alignment of multiple links, the watchmaker has made the unprecedented choice of connecting the double mainspring barrel to the fusee via a Dyneema nanofiber cable. There are two reasons for this. The first is to optimize efficiency by eliminating all the friction between links entailed by a traditional chain; and the second is to increase and precisely regulate the power reserve: the number of times the cable is wrapped around the fusee or the barrel is double that of a system equipped with a chain.

While super-thin at just 0.18 mm in diameter, meaning the equivalent of three hairs’ breadths, this cable is extremely resistant. By way of example, such a cable is strong enough to pull a weight of nearly 10 kilos. While such force is obviously not required to ensure the transmission of energy to the movement of the Angelico watch, the robustness of the cable is a real guarantee of reliability. Especially since, so as to avoid any risk of breakage, it is tied and then wrapped twice around the barrel or the fusee. Based on the self-locking principle used to ensure secure ship cargo stowage, this system guarantees perfect distribution of the force exerted on the cable. At the foot of the barrel fitted with two superimposed springs, designed to achieve optimal performance, the winding of the cable drives the 72-hour power reserve indication, while the “stop work” indication, placed on the fusee bridge, indicates the end of the barrel winding. 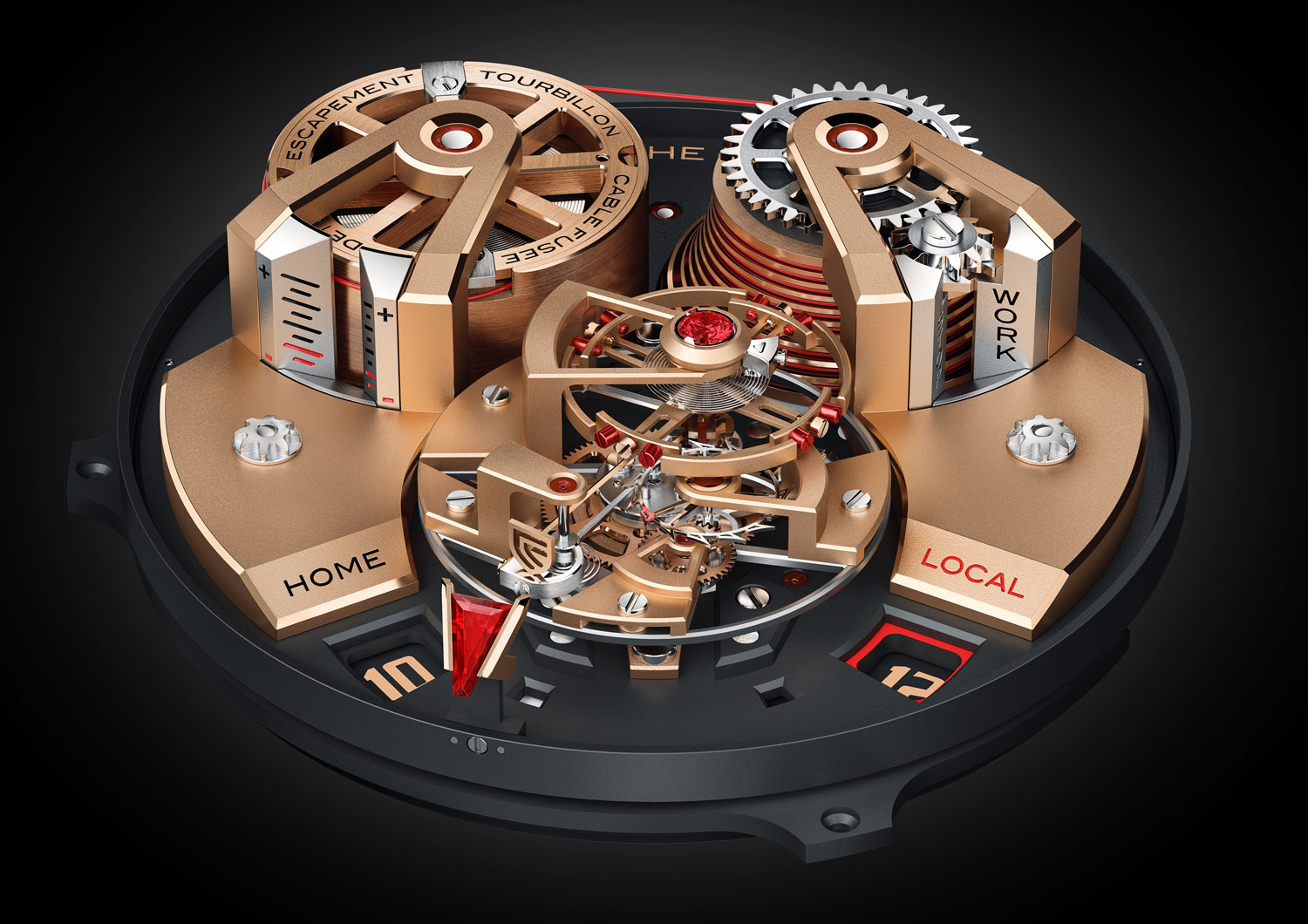 Time plays the starring role
While the mechanical challenge remains the essential focus from the watchmaker’s standpoint, the functionality of a timepiece is a major issue. At the heart of the Angelico watch, the performance of the show staged by time is also measured by the readability of the indications. The two time zones are thus indicated via a jumping hour display appearing in counters at 5 and 7 o’clock, along with a day/night indication. To ensure an unobstructed view of the mechanism’s inherent beauty, the minutes are displayed by a peripheral hand adorned with a natural ruby on the red gold version, and blue sapphire on the titanium version.

From an aesthetic point of view, the Angelico watch offers a fresh immersion into the beauty of mechanics. Topped by a domed crystal, the 45.50 mm 5N red gold or titanium case makes the depth of field its best asset. While technical sophistication reigns supreme, the details are once again perfectly highlighted, as evidenced in the hand-chamfered Charles X bridges, as well as the escapement’s incabloc shock-absorbers concealed beneath a natural ruby or blue sapphire, Christophe Claret’s aesthetic signatures. The show continues through the sapphire crystal case back, providing a chance to admire the instant-jump dual-time mechanism.

Available in two 10-piece limited editions in 5N red gold or titanium, Angelico embodies the perfect blend of traditional watchmaking and inventiveness that Christophe Claret has been brilliantly illustrating within his brand for ten years. To mark the occasion, the watchmaker is extending the warranty on all timepieces to five years: an additional pledge of reliability available to all devotees of Fine Watchmaking for whom, like Christophe Claret, nothing is more beautiful than the perfect match between aesthetic harmony and technical innovation.

The Christophe Claret Angelico tourbillon is limited to 10 pieces. The Price excluding VAT in Swiss francs is 238’000.

The titanium version of the Christophe Claret Angelico