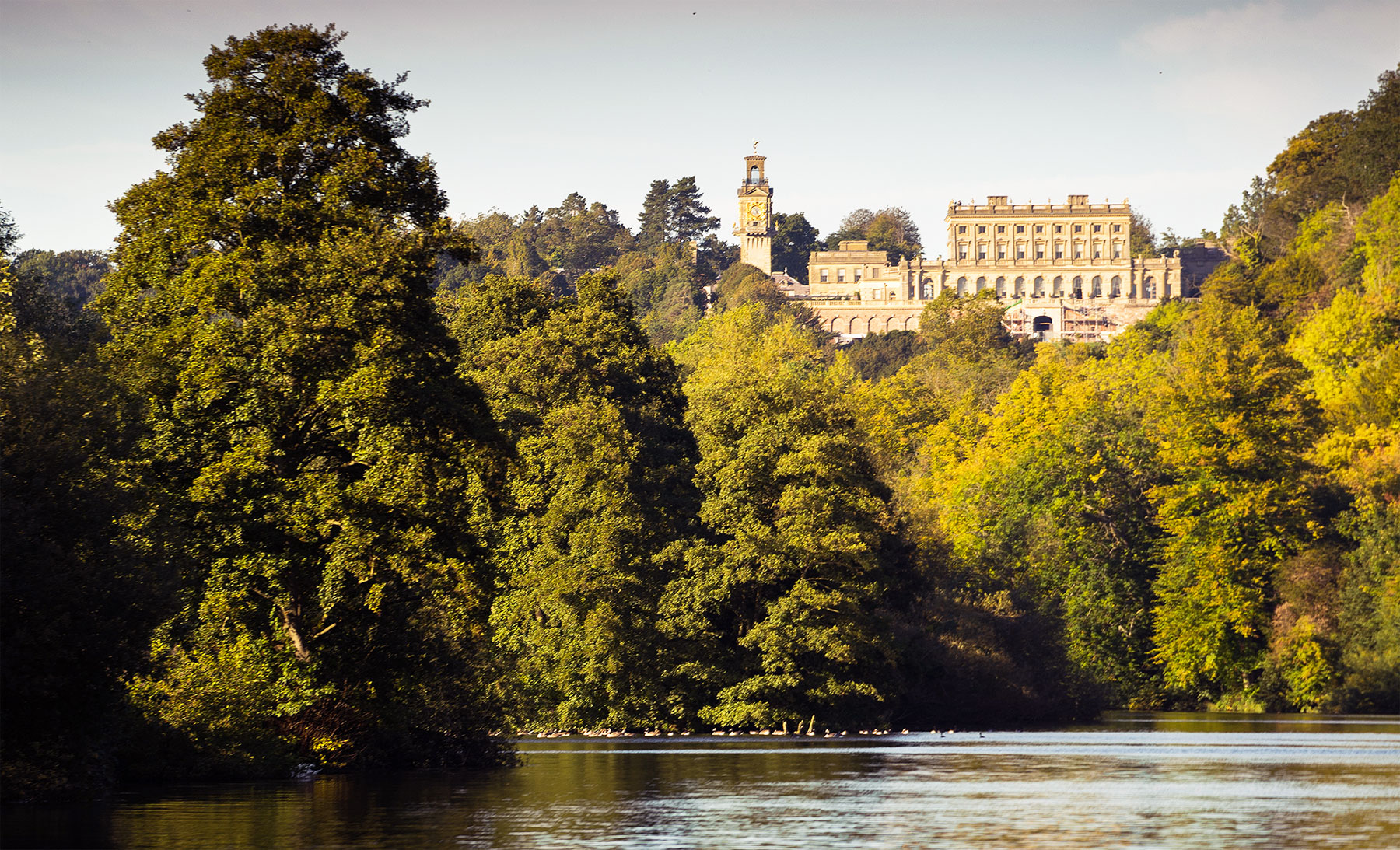 Cliveden House and Spa – just 45 minutes west of London – is the perfect luxury hotel for a weekend birthday getaway, as Gina Baksa discovered

Power, politics and parties: three words that define the louche legacy of Cliveden. This grand Grade I Italianate mansion has provided a stately backdrop to Sixties Government scandals and Beatles movies; and entertained royalty and aristos, writers and movie stars, politicians and rock stars.

Both the original Cliveden, built in 1666 for the second Duke of Buckingham and its replacement, built in 1824, were sadly destroyed by fire. The present mansion was built in 1851 by the architect Charles Barry and later bought by the Duke of Westminster. His decision to sell Cliveden to the American billionaire Astor family in 1893 famously displeased Queen Victoria. 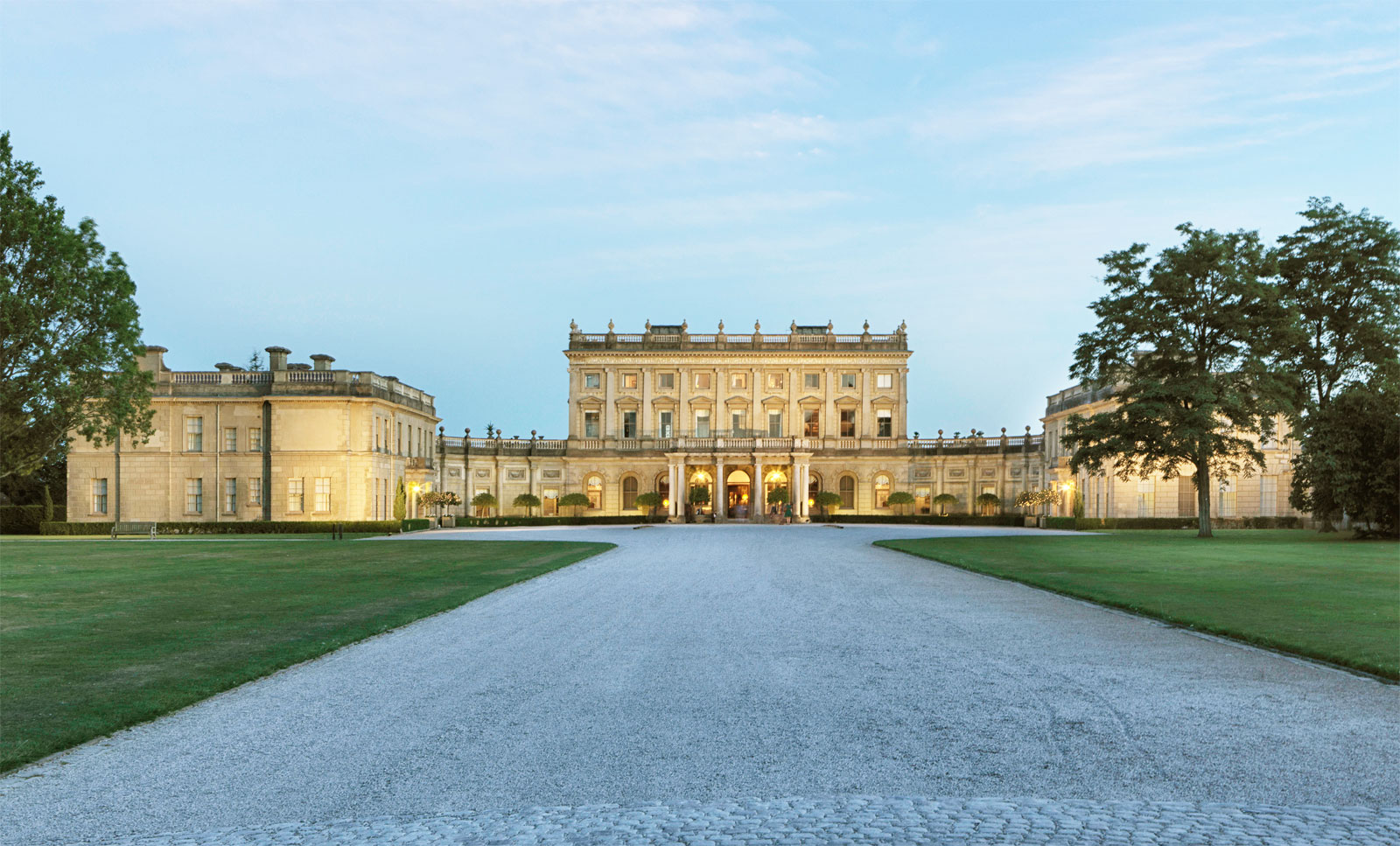 In 1942, the family bequeathed Cliveden to the National Trust who leases the property to the current owners, the billionaire Livingstone brothers. The property developers have turned the fortunes of Cliveden, spending millions on a successful refurbishment programme, coupled with a post-Downton marketing drive to attract a larger American clientele. They also own the rather gorgeous Chewton Glen Hotel and Spa in the New Forest.

Commandeering an elevated position on chalk cliffs above the River Thames in Berkshire, Cliveden is the jewel in the crown of a stunning 376-acre estate, now managed by the National Trust and a member of the prestigious Relais & Chateaux group.

I’m in a celebratory mood as my taxi crunches along the long gravel drive towards the entrance, passing by the beautiful Fountain of Love, while either side I catch glimpses of the beguiling formal gardens and woodlands. 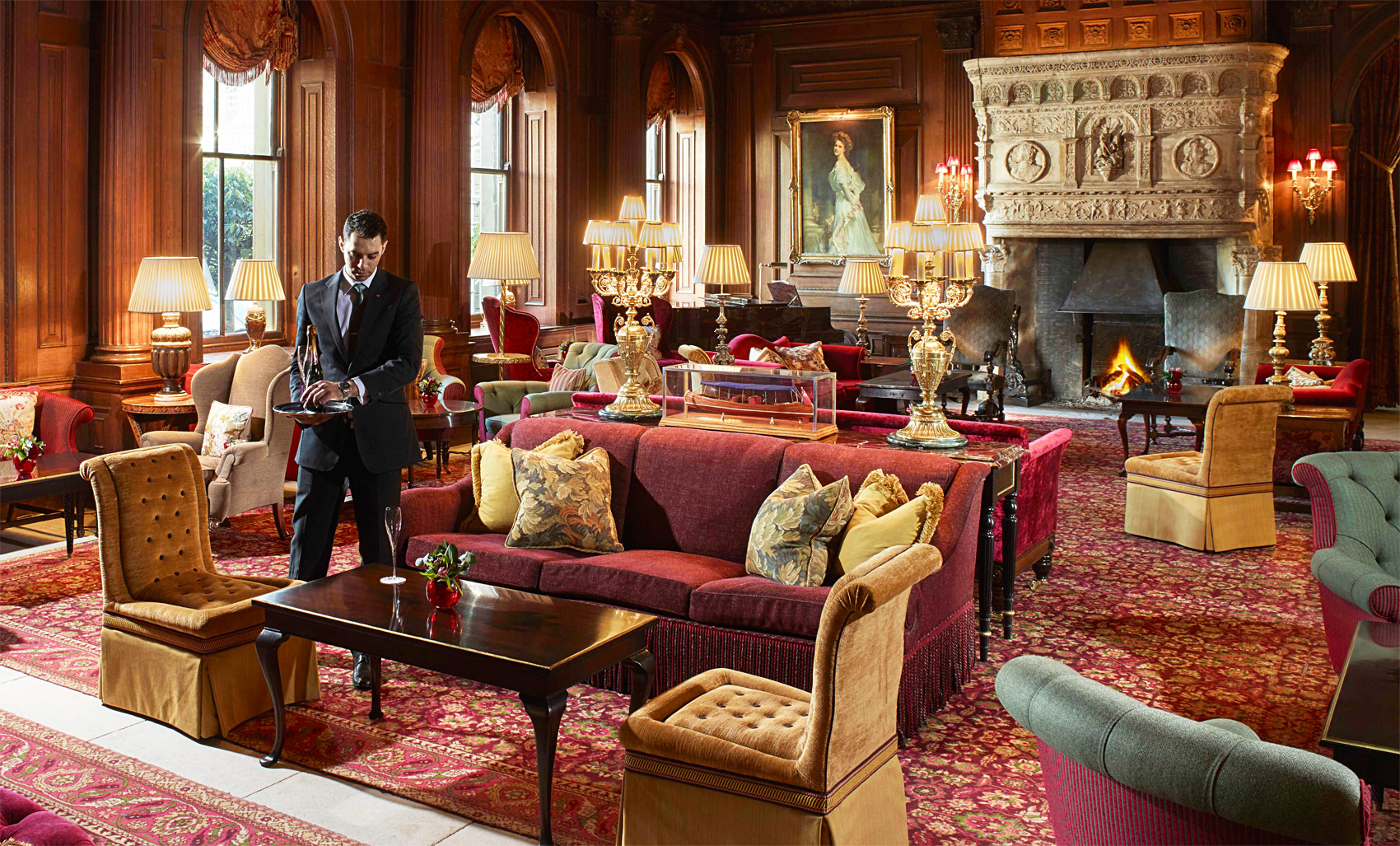 On arrival, – greeted warmly and professionally by everyone at the front of house – the massive Great Hall takes my breath away. It is, quite simply, the most impressive and awe-inspiring ‘reception area’ of any hotel I’ve had the pleasure to visit. Originally two rooms, it is now a cavernous yet richly warm and inviting lounge area replete with velvet sofas – perfect for afternoon tea and pre-dinner cocktails.

A triptych of medieval tapestries hangs royally above shiny suits of armour. Ancestral portraits peer down from the grand staircase and medieval fireplace, most notably that of Lady Astor – the American-born socialite and first woman MP to enter Parliament in 1919. 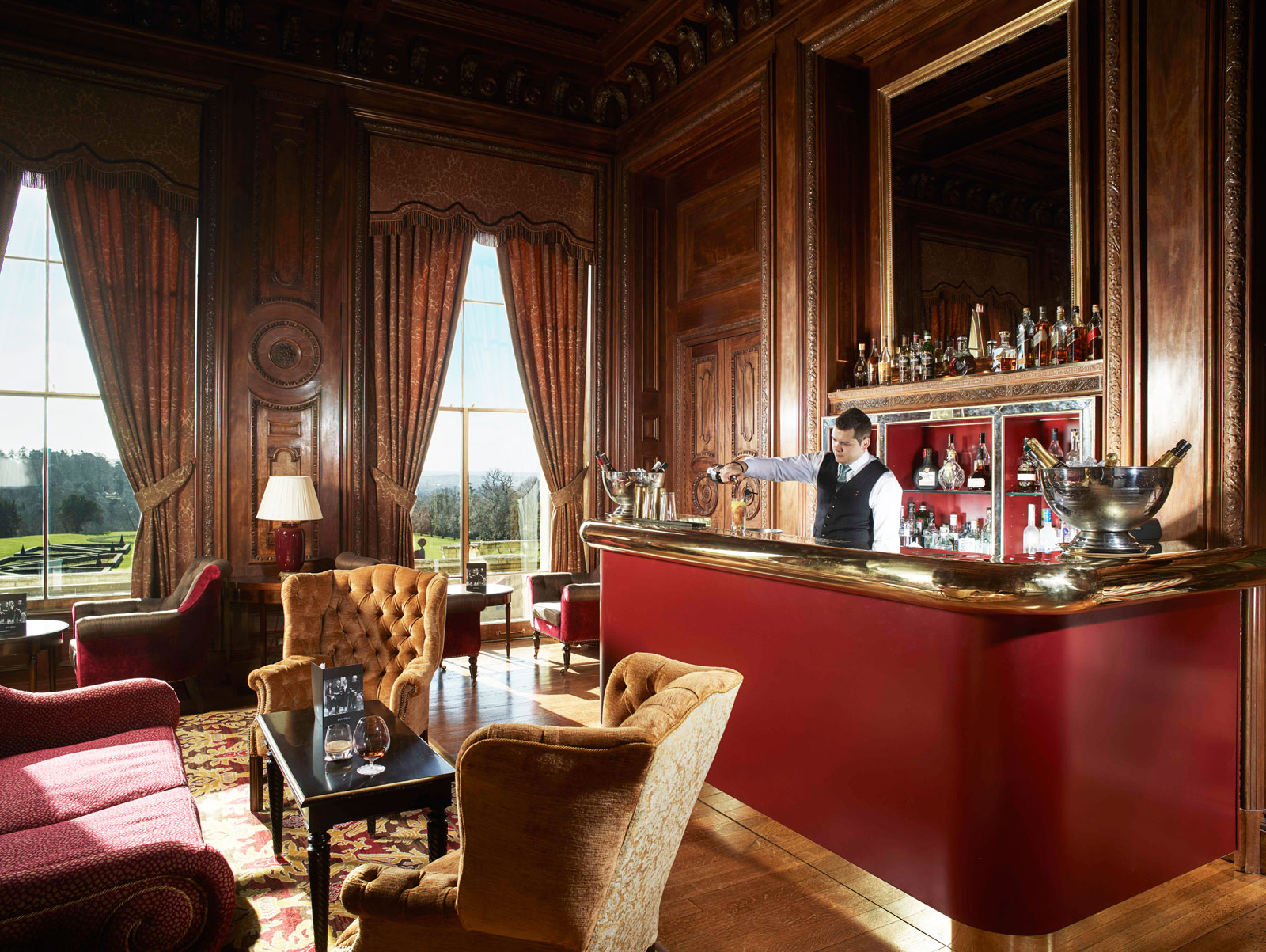 “It’s the Astors of course who are most associated with Cliveden,” General Manager Sue Williams tells later. “They owned the house from the early 1900s. William Waldorf Astor, America’s richest citizen, then gave the house to his son and daughter-in-law, Nancy Astor, in 1906, and Cliveden became a vibrant social hub.

Keeler’s double involvement with John Profumo the Secretary of State for War in the Sixties – and a Russian agent – arguably brought down the Conservative Government and the scandal became known as the Profumo Affair. 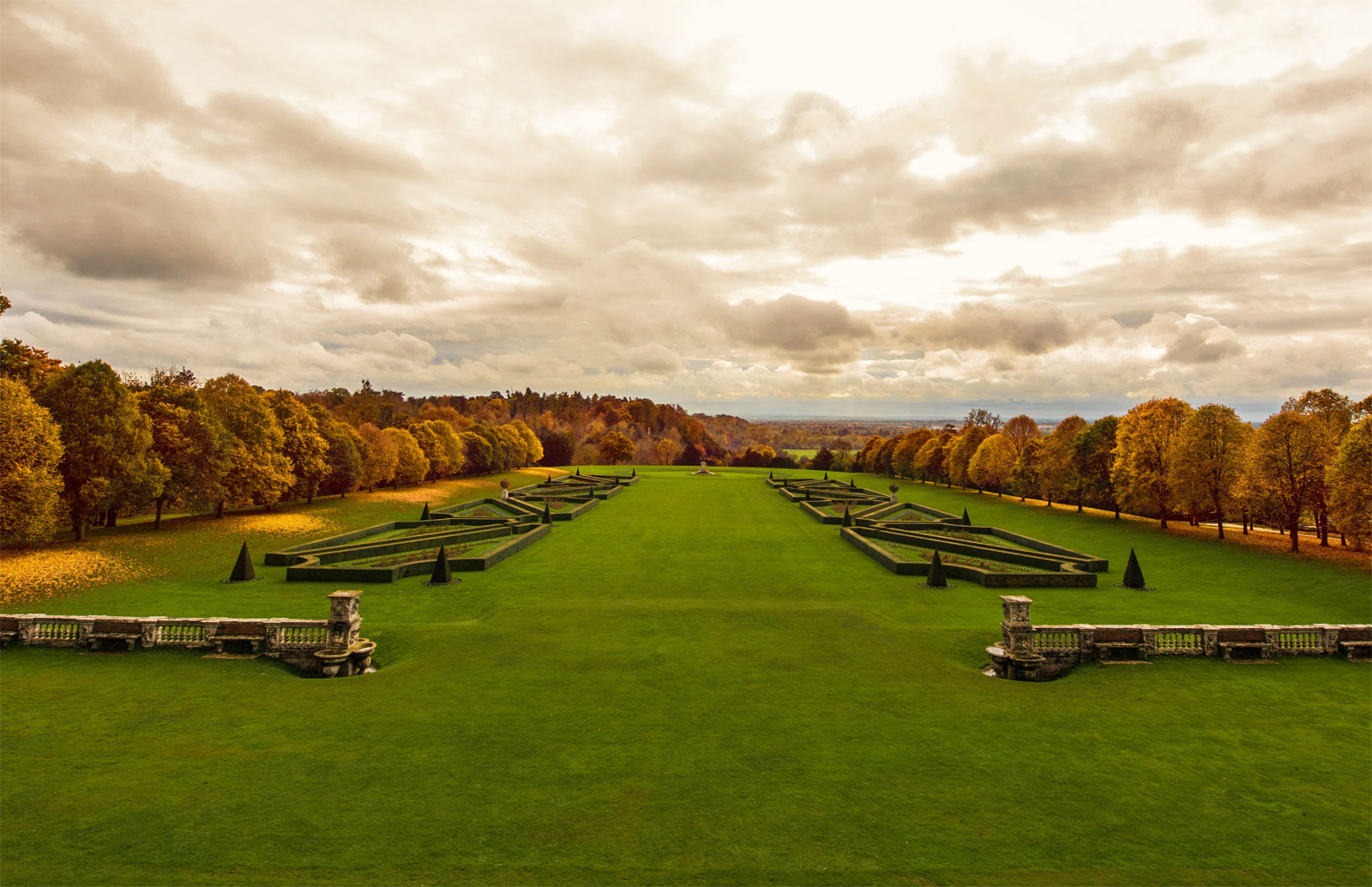 Pondering that fateful summer in 1961, I head out to explore the beautiful grounds and find some poolside excitement for myself. Owned, managed and lovingly cared for by the National Trust, the gardens feature the celebrated Parterre, season-long floral displays, distinctive topiary and a collection of exceptional sculptures. The ground floor of the house and all the grounds are open to the public twice a week, so you don’t have to stay at Cliveden to enjoy its beauty. 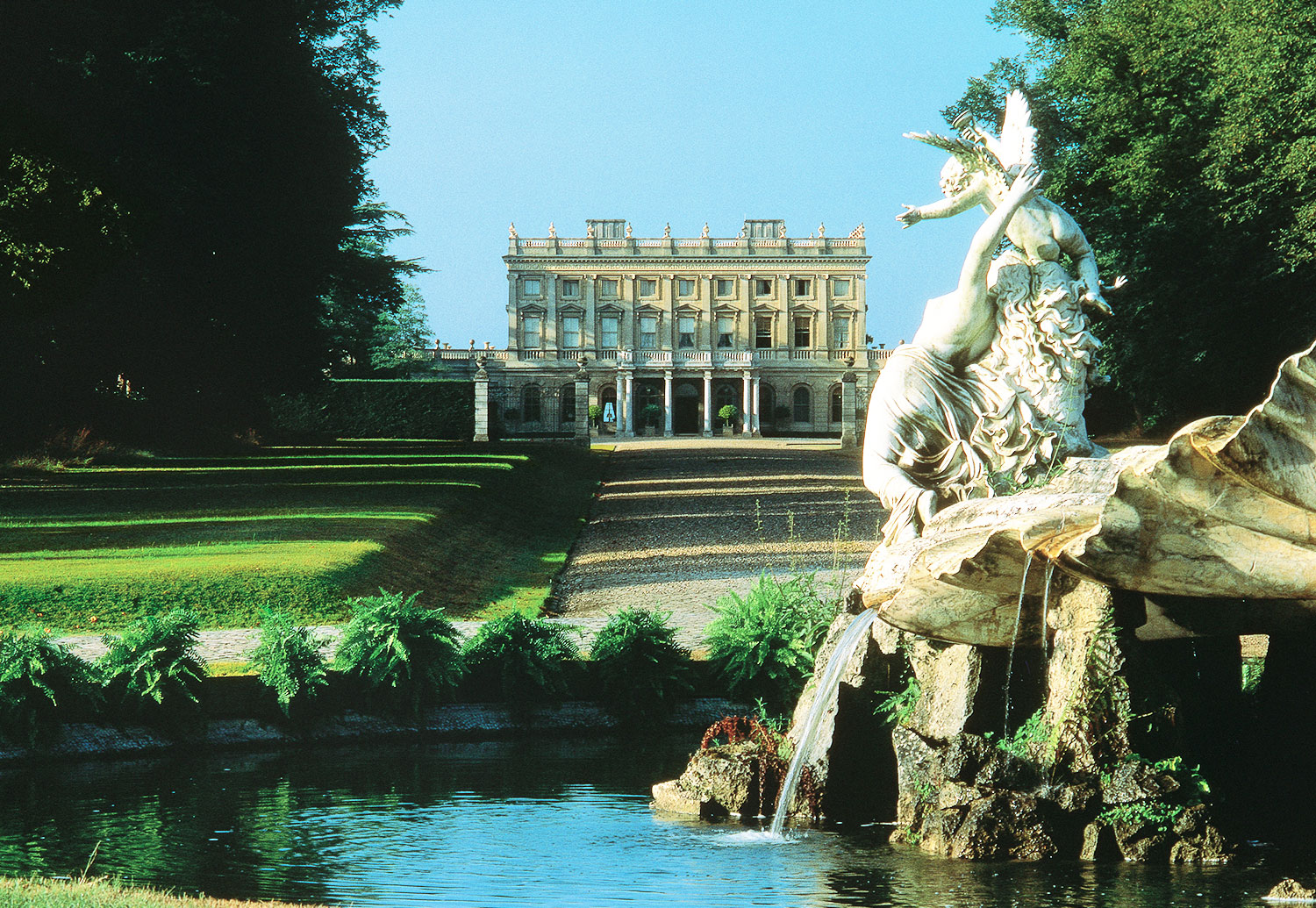 I walk back along the tree-lined driveway to the maze and the Water Garden, returning to the house via the Long Garden with its beautiful plantings, the exquisite rose garden and stop for a while in the peaceful War Memorial Garden. There is nothing as beautiful as resting in an English garden on a warm spring afternoon.

Deciding to check out the spa and pool area next morning, I head to my room – the impressive oak-panelled Buckingham Suite – named after the Duke who built the original house in 1666. Both this house and its 1824 replacement were destroyed by fire, and the present house was built in 1851 by architect Charles Barry.

The south-facing views across the 19th-century Parterre towards the Thames and Berkshire are incredible – I can see for miles across the manicured lawns to the mature trees bordering the Thames and can even make out the speck that is Maidenhead in the far distance. 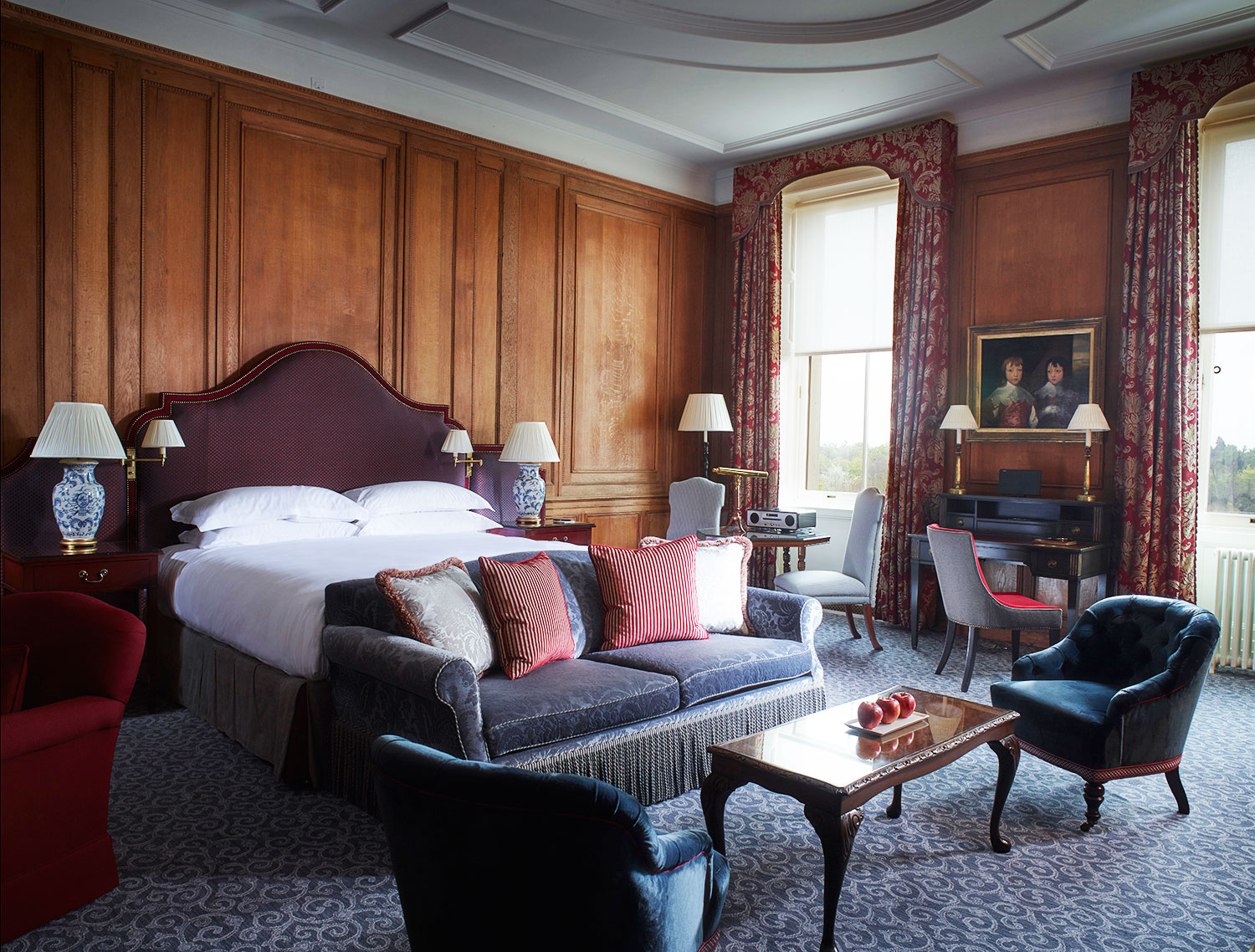 This suite is twice the size of my London apartment with an interior design that stays faithful to the original flavour, yet offers luxurious modern comforts – including an interactive Sony tablet and music dock. The colours are a bold grey and red palette with exquisite furnishings and the most heavenly bed ever. Antiques, brocade, heavy drapes complement a portrait of Buckingham and his brother as children above the writing desk. Carara marble flooring and screens behind a free-standing sexy red bathtub are the highlight of the capacious bathroom with its superb rainforest shower. 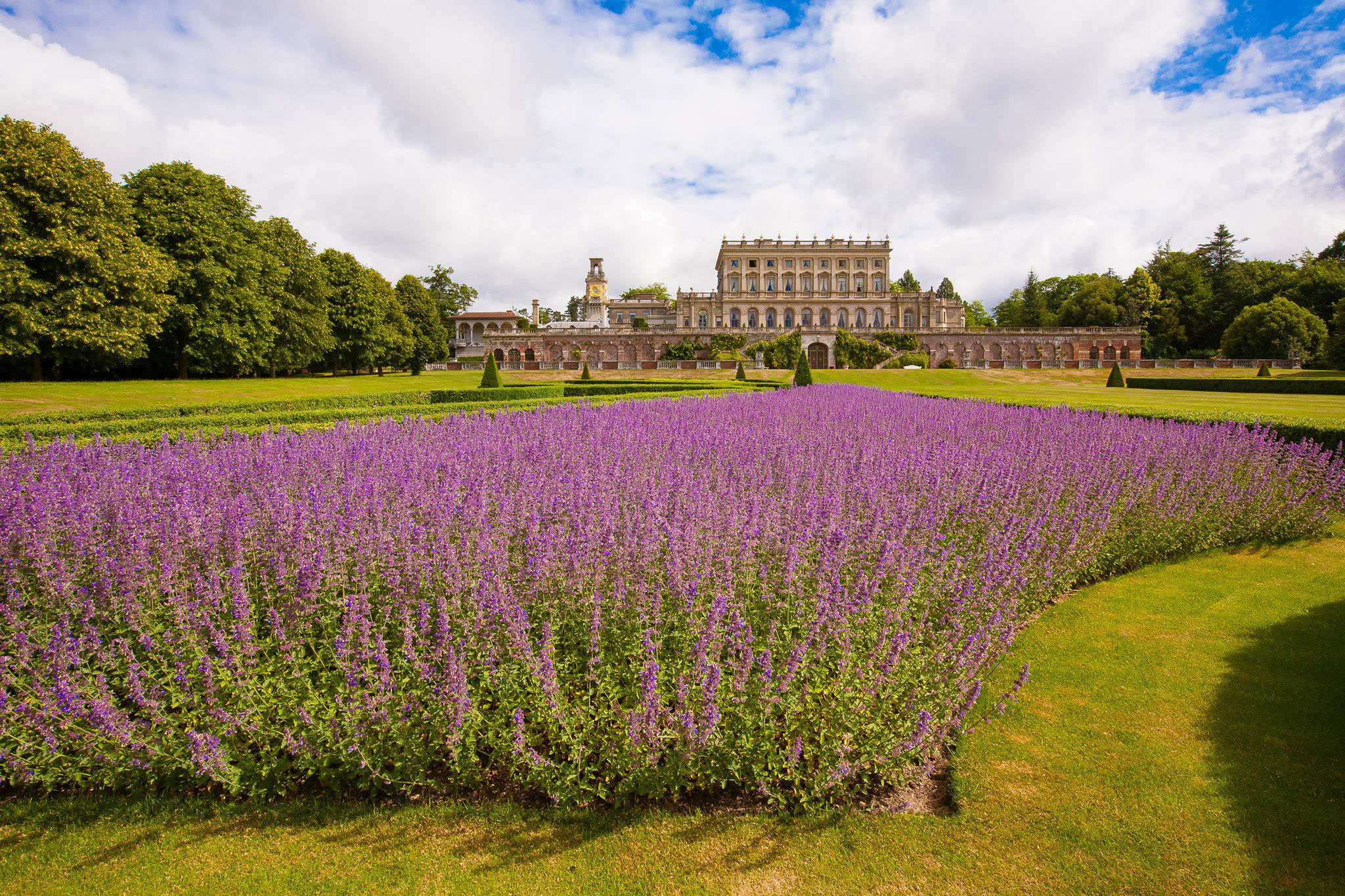