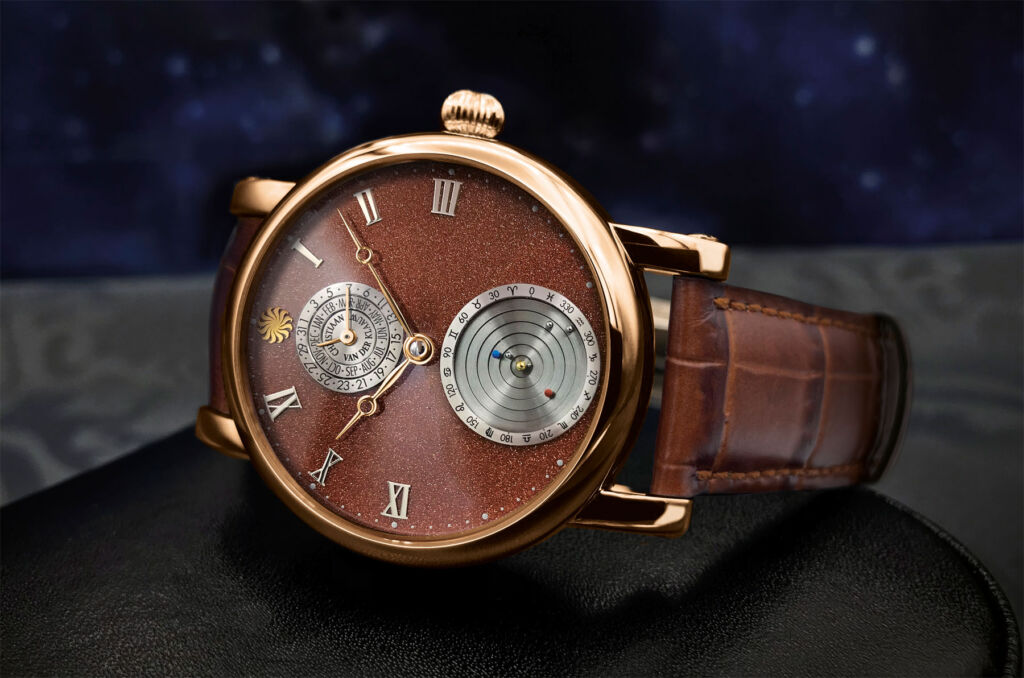 Mars, the red planet, has always fascinated humanity as it is the nearest planet to Earth. The glowing redness seen through telescopes captivates Astronomers, and this has captured the imagination of the designers at Dutch luxury watchmakers Christian van der Klaauw known by CVDK. They have created a fascinating timepiece, the Planetarium Dunes of Mars, which celebrates the red planet. 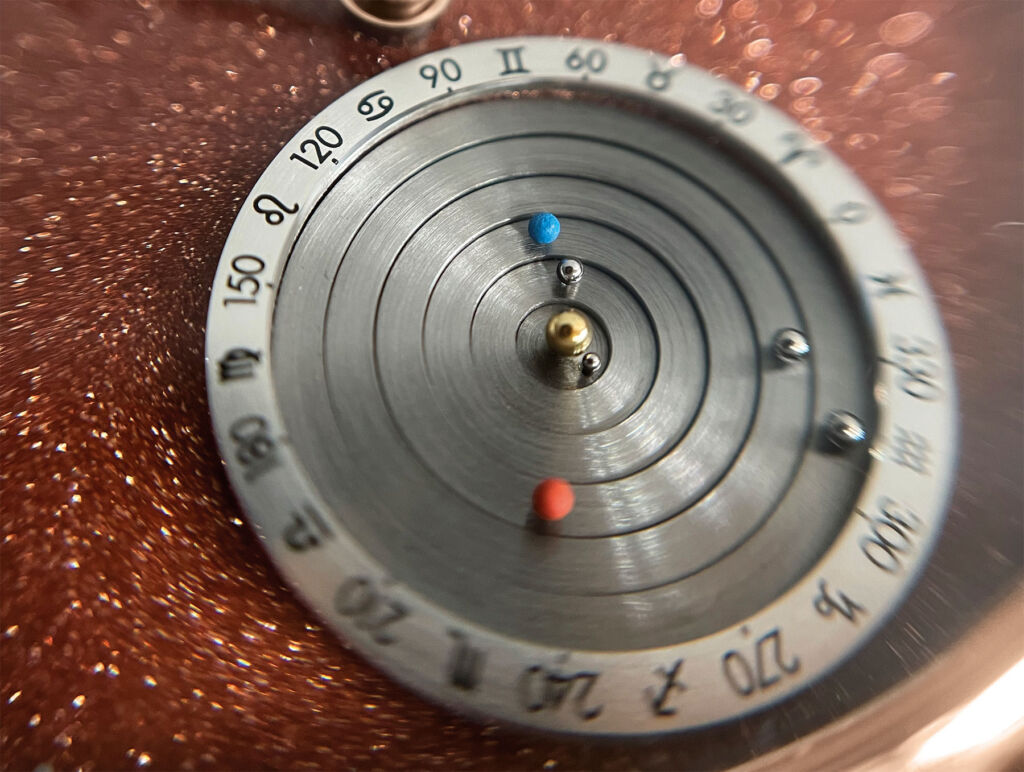 The Planetarium Dunes of Mars features the most miniature mechanical planetarium on a watch anywhere. It is made with a specially created CVDK signature Aventurine Glass dial in red – portraying Mars’ red sandy grounds.

The Red Planet, Mars, is a predominantly dry and dusty place. The colour comes from iron oxide, which is rust, like we experience on Earth when iron oxidises mainly in the presence of water. Mars has water on its surface, so NASA believes it can support life. Soon the agency will attempt to send Astronauts to Mars.

The atmosphere on Mars is made from Nitrogen, Argon and Carbon Dioxide and is very thin. The planet can be easily seen in the night sky as it looks like a bright red light beaming. Mars has two moons called Deimos and Phobos and shares a similar twenty-four-hour day as we do. It orbits the sun in 687 Earth days, one Martian year, and this can be viewed on the Dunes of Mars’ planetarium dial. 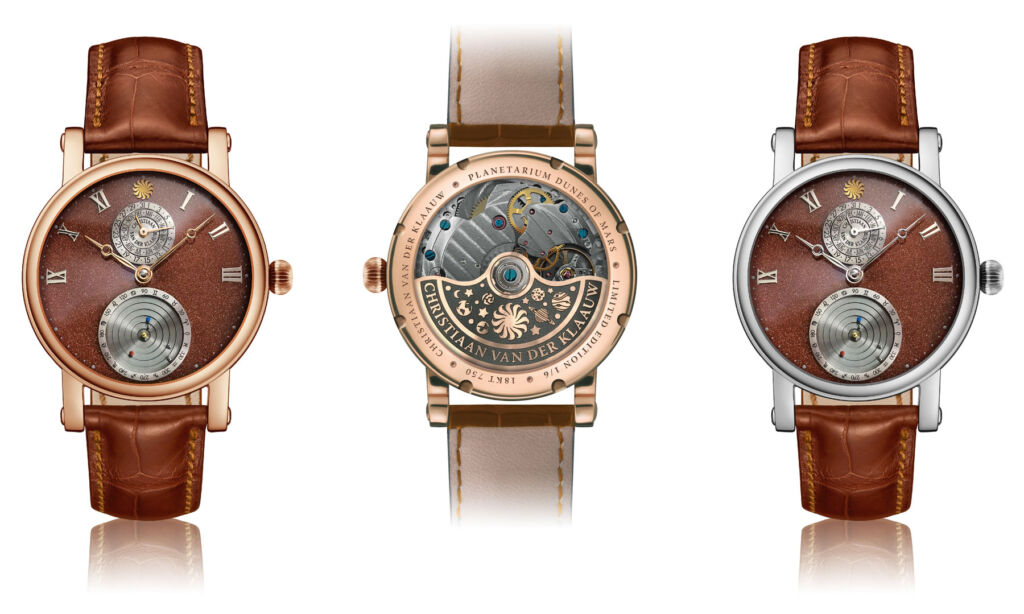 You get the universe on your wrist with the Planetarium Dunes of Mars watch featuring the heliocentric planetarium. The display shows the solar orbits of Mercury, Earth, Mars, Venus, Jupiter and Saturn in real time. You also see Minutes, Hours, Date and Month.

CVDK shows the highest skill level with its Astronomical watch, and the Planetarium Dunes of Mars understandably is one of the most complex timepieces in their range. The model celebrates grand masters of planetarium design, such as Christiaan Huygens, Johannes Kepler, Nicolaas Copernicus, and Elise Eisinga.

The mechanical Planetarium lies at the 6 o’clock position, with the Sun positioned in the middle of the Planetarium. The planets line up in formation from the Sun, Mercury, followed by Venus, Earth, Mars, Jupiter and Saturn.

The Planetarium Dunes of Mars models have the same parts, but you choose the material you would like as the casing and buckle. The three options are steel, rose gold and white gold. The watch movement is the automatic winding CVDK7386, containing 35 jewels and a twin barrel. It has a power reserve of 96 hours. 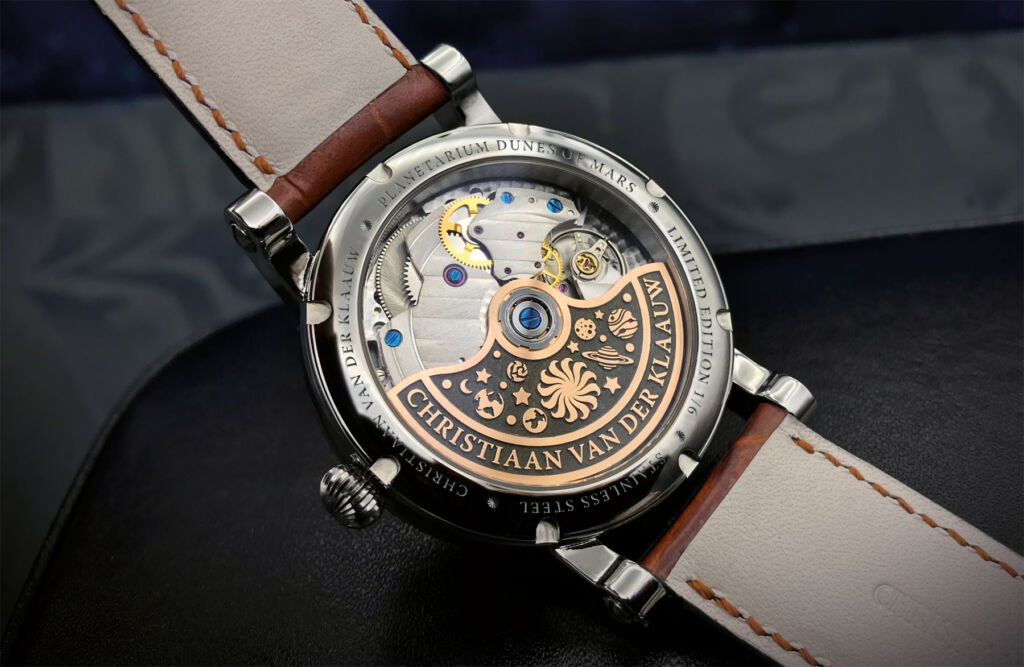 The case is a relatively small 40mm diameter, so you can see how tiny the Planetarium must be to fit within this tight space. The dial lies under a sapphire crystal dome; the same material is used for the case back.

The beautiful dial is made from Aventurine Glass in red with white rhodium-plated indexes and hands, rhodium-plated Planetarium with coloured Sun, Earth and Mars. You get a brown leather strap to secure the watch to your wrist, and the buckle fastener is the material of your case choice and is engraved with the brand logo. The rotor is engraved with planets, stars and the ‘Sun with 12 Claws’, the logo of Christiaan van der Klaauw. 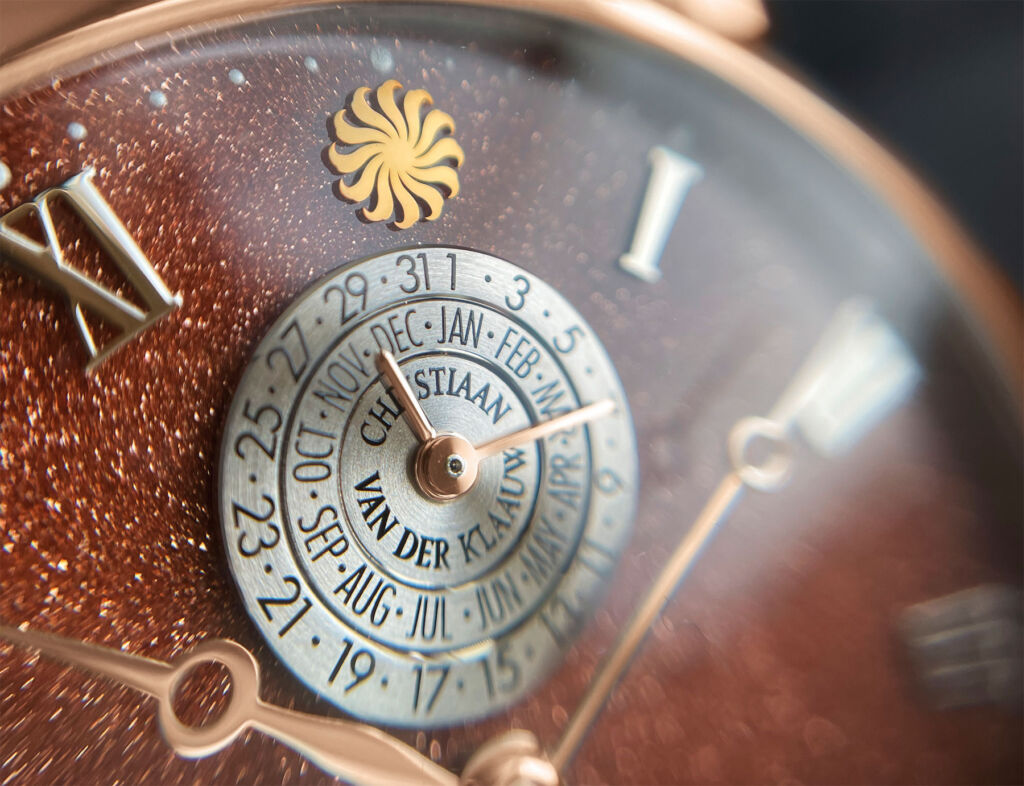 If you would like to find out more about CVDK and their exceptional watches, please visit https://www.klaauw.com.