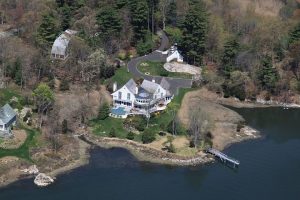 The impeccable Cove House Darien is a French Norman-style estate with grounds extending to 2.03 private acres. The Cove House abutts Scotts Cove in Darien, Conneticutt, with access to the Long Island Sound and within an hours journey to New York City. The Cove House Darien Waterfront Estate Auction will happen live, at an online auction on June 25, Concierge Auctions announced today.

The Cove House in Darien was previously listed for $12.5 million, the property will be auctioned Absolute, meaning it will sell to the highest bidder regardless of price. Incentives are offered for opening bids from $6 million to $10 million. The sale is being conducted in cooperation with listing broker Doug Milne of Kelly Associates.
”Concierge Auctions has a proven reputation as the leading firm for auctioning the most premier residences nationwide. I’m excited to work alongside their team to find a new owner for this extraordinary home,” stated Milne. ”Darien is located on Connecticut’s ‘Gold Coast’ in Fairfield County, one of the wealthiest and most coveted areas in the tri-state region. This estate is a testament to its prestige. My client realizes he is taking a risk by selling Absolute and purely allowing the bidders to name the price. However, now is the time – time to sell the estate, congratulate a new owner and move on”

Designed to capture the stunning beauty of its surroundings, The Cove House Darien is located at 17 Tokeneke Trail, is a five bedroom, seven bathroom residence designed in an elegant French Norman style. Situated on 2.03 beautifully landscaped, private acres on Scott’s Cove, the property features a manor home, guest cottage and private dock with access to the Long Island Sound and beyond. Four gorgeous fireplaces punctuate the beautifully appointed living spaces, all of which open to the deck and pool and reflect sophistication and attention to detail. Upstairs quarters include a master suite with a sunken stone bath and custom closets, and four suite bedrooms. In addition to an attached two-car garage, there is also a detached garage with room for three more cars. Darien in Connecticut is one of the most affluent towns in the United States and was rated one of the best places to live in the country by CNN. Situated between the small cities of Norwalk and Stamford, the town is a bedroom community with relatively few office buildings. Many residents work in New York City and commute via two Metro North railroad stations – Noroton Heights and Darien – to Grand Central Terminal in less than an hour. The town includes four parks, two beaches on Long Island Sound, three country clubs, a hunt club and two yacht clubs.

”Our firm has represented breathtaking estates across the nation, and this is one of the most impressive properties we have had the pleasure to work with. The design is impeccable, the construction superb, and the location ideal” stated Laura Brady, Vice President of Marketing for Concierge Auctions. ”This Absolute auction is not only the most extravagant opportunity in the tri-state area, but arguably in the country. Buyers and their representing financial advisers and real estate brokers should take notice of this rare occasion.”