Iconic US label Kate spade new york has opened two new stores in the heart of London. The flagship store in Sloane Square and a second in Covent Garden represent a significant move into the European market. 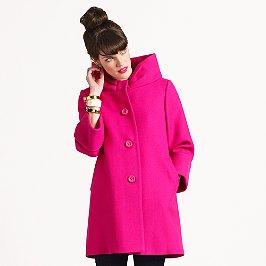 Founder Kate Spade turned the reigns over to the Liz Claiborne Group in 2007 and Deborah Lloyd, formerly of Banana Republic and Burberry, took the helm as creative director and co-president. Under Lloyd’s direction she has grown the line while honouring its rich history. The Kate spade new york brand’s offering now includes bags, luggage, apparel, shoes, jewellery, stationery, eyewear and homewares.

“As a Brit, I am thrilled to launch two kate spade new york stores in London! It feels, in many ways, like the perfect homecoming for me. The two London stores will be our first major presence in Europe and will be the gateway to the rest of the continent. We are in an amazing expansion mode right now, with openings around the world, and I think London is a perfect fit for the kate spade new york brand. I am eager to find out how the ever-stylish London girls will work kate spade new york pieces into their look.” – Deborah Lloyd, Chief Creative Officer, kate spade new york