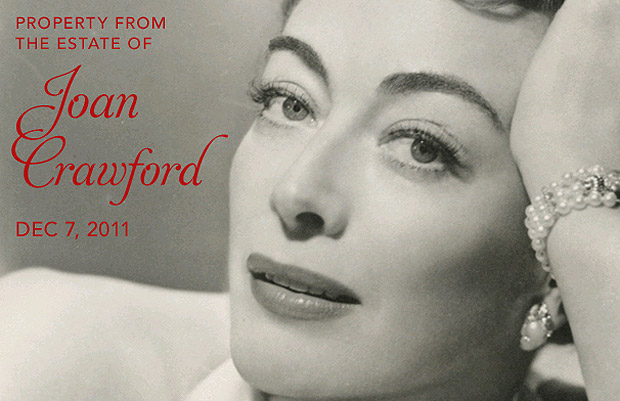 Doyle New York will auction almost 80 lots of Hollywood Memorabilia including Photographs, Art, Jewelry and Furs from the estate of Joan Crawford.

Doyle New York is honored to auction property from the Estate of Legendary Star of Hollywood’s Golden Age Joan Crawford on Wednesday, December 7, 2011 at 10am. This historic sale features 77 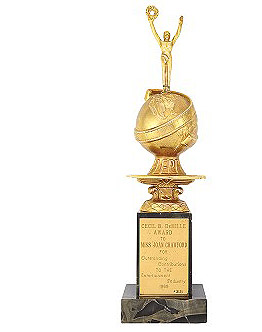 lots of MGM Studios contracts and correspondence, film memorabilia, publicity stills, jewelry and a selection of luxurious fur coats and wraps. The property has descended in Ms. Crawford’s family and is now being offered at auction to her fans worldwide. The public is invited to the exhibition on view Saturday, December 3 though Tuesday, December 8. Doyle New York is located at 175 East 87th Street in Manhattan.

One of the sale’s highlights is the Cecile B. DeMille Award presented to Joan Crawford by the Foreign Press Association at the Golden Globe Awards ceremony in 1970. Fans may also bid on Ms. Crawford’s scrapbooks chronicling a number of her films of the 1930s and 40s, as well as studio contracts and the 1943 letter detailing the buy out of her contract with MGM. Jewelry from Ms. Crawford’s collection features a gold, diamond, emerald and ruby brooch in the form of a miniature Pepsi bottle. Her collection of furs offers coats, stoles and boas in mink, sable and fox.

Joan Crawford was one of Hollywood’s greatest film stars. An Academy Award-winning actress, she appeared in over eighty films during a career that began in the silent era and spanned 45 years.

Although she would live most of her life surrounded by luxury, Joan Crawford had very humble beginnings. She was born Lucille Faye LeSueur in San Antonio, TX on March 23, 1908 to Anna Bell Johnson (1884-1958) and Thomas LeSueur (1868-1937), a carpenter who abandoned the family around the time of Lucille’s birth. Anna Bell and her two children, Lucille, known as “Billie,” and son, Hal (1901-1963), later lived with Anna Bell’s new husband, Henry J. Cassin, in Lawton, Oklahoma. It was there that Lucille got her first taste of show business, watching the Vaudeville acts in the small “opera house” Cassin operated. By 1916, the Cassins were living in Kansas City, Missouri, and the marriage had fallen apart. Anna Bell found work as a laundress, and young Billie was forced to become a work-scholarship student at boarding school, first at St. Agnes Academy, a Catholic school, and later at Rockingham Academy, a school for “wayward girls.” She would later briefly attend Stephen’s College, a girl’s school in Columbia, Missouri.

Returning to Kansas City, she found work at Kline’s Department Store and spent her meager salary on clothing and free time at dances, where she attracted the attention of a booking agent putting together a traveling dance revue. She auditioned and became a professional dancer. Crawford performed in clubs in Chicago, Oklahoma City, and Detroit, and eventually landed a job in New York in a J.J. Schubert production on Broadway in 1924. A subsequent screen test led toa $75-per-week contract with MGM, and in 1925, Crawford found herself in her first Hollywood picture, Lady of the Night, as a screen double for Norma Shearer. Shortly thereafter, she appeared in Old Clothes, the first film in which she was billed as “Joan Crawford.”

In 1928, Crawford was cast as Diana Medford, a quintessential flapper, in Our Dancing Daughters. It made her a bona fide star. F. Scot Fitzgerald wrote about her, “Joan Crawford is doubtless the best example of the flapper, the girl you see in smart night clubs, gowned to the apex of sophistication, toying iced glasses with a remote, faintly bitter expression, dancing deliciously, laughing a great deal, with wide, hurt eyes. Young things with a talent for living.”

The next year, she married Hollywood royalty — Douglas Fairbanks, Jr., whose father was the swashbuckling actor Douglas Fairbanks, Sr. and stepmother was “America’s Sweetheart” Mary Pickford. The marriage would last four years. Also in 1929, she made her first talking picture, Untamed. Unlike with many contemporary actors, Crawford’s transition to “talkies” was a smooth one, due to her earlier elocution lessons meant to eliminate her southwestern accent. By this time, her weekly salary had risen to $500, her costumes were being created by legendary Hollywood designer Adrian, she was starring opposite MGM’s top leading men, and she had moved into a luxurious Brentwood mansion, which would be her home for the next 25 years.

Crawford was cast opposite Clark Gable for the first time in 1931’s Dance, Fools, Dance, which led to a series of successful film collaborations and an off-screen relationship with Gable. In 1935, she married actor Franchot Tone. Educated and cultured, Tone had an established career in the theatre before coming to Hollywood in 1933. Their marriage lasted until 1939. The following year she adopted her first child, Christina.

By now a top star earning $330,000 per year, Crawford fought for and won the role of the hard-as-nails, husband-stealing Crystal Allen in the 1939 film adaptation of Clare Booth’s The Women, directed by George Cuckor. Her performance was a critical success, and it drove a desire in her for heavier, more complex character roles than she was being given.

Joan Crawford left MGM in 1943. As she described it, “I loved MGM – it was home. But I longed for challenging parts and I wasn’t getting them.” By this time, she had married again, in 1942 to actor Phillip Terry. It was a difficult time, money was tight, they grew apart, and divorced in 1946. During their marriage, they adopted a son, Phillip Terry, Jr., whose name was later changed to Christopher. She adopted twin girls, Cindy and Cathy, in 1947.

The years following her departure from MGM were difficult ones. Crawford had no films between 1943 and 1945, despite having signed a new contract with Warner Brothers. She spent her free time raising money for the War effort and volunteering at the Hollywood Canteen.

In 1945, she staged one of the greatest of Hollywood come-backs ever, in the role of the long-suffering mother, Mildred Pierce. Having been turned down by Bette Davis, Warner Brothers director Michael Curtiz agreed to allow Joan Crawford a screen test – he was won over, as were the critics, her fans, and the Academy of Motion Picture Arts and Sciences. Joan Crawford won the Academy Award® for the Best Performance by an Actress in a Leading Role the following year, accepting the award from her sick bed at home. She was nominated again for Best Actress for her role in the 1947 drama, Possessed, in which she felt she delivered her finest performance. This was followed by a series of films with Warner Brothers, and later, films with MGM, 20th Century-Fox, Columbia, Republic, Universal, United Artists, RKO and others. She was nominated a third time for Best Actress for her role in the RKO 1952 thriller, Sudden Fear.

In 1955, Crawford was married for the last time, to Alfred N. Steele, president of Pepsi-Cola and later its Chairman and CEO. She dove into her new role promoting the company, traveling extensively, and even assuming a seat on the board of directors upon Steele’s death in 1959.

Crawford’s final blockbuster film role was as the aging, disabled actress Blanche Hudson in the 1962 psychological thriller, What ever happened to Baby Jane? Co-starring Bette Davis, who would be nominated for an Academy Award® for her role as Baby Jane Hudson, the film was an immediate box office success.

The 1960s would also see Joan Crawford in a series of television roles, including an acclaimed 1969 performance in Night Gallery, directed by a young Stephen Spielberg. She also wrote two memoirs, A Portrait of Joan (Doubleday: 1962) and My Way of Life (Simon & Schuster: 1971). In 1970, she was honored by the Hollywood Foreign Press Association with the Cecile B. DeMille Award for outstanding contributions to the world of entertainment, presented to her by John Wayne during the televised Golden Globe® Awards ceremony.

Joan Crawford passed away at her home in New York on May 10, 1977. Her funeral was held at Frank E. Campbell, followed by a memorial service at All Souls Unitarian Church on Lexington Avenue. A second memorial was organized by George Cukor in Beverly Hills at the Academy of Motion Picture Arts and Sciences. Her ashes were entombed at Ferncliff Cemetery in Hartsdale, New York, with Alfred Steele.

At Joan Crawford’s memorial, George Cukor eulogized her saying, “She was the perfect image of the movie star, and, as such, largely the creation of her own indomitable will. She had, of course, very remarkable material to work with:a quick native intelligence, tremendous animal vitality, a lovely figure and, aboveall, her face, that extraordinary sculptural construction of lines and planes, finely chiseled like the mask of some classical divinity from fifth-century Greece. It caught the light superbly, so that you could photograph her from any angle, and the face moved beautifully….The nearer the camera, the more tender and yielding she became—her eyes glistening, her lips avid in ecstatic acceptance. The camera saw, I suspect, a side of her that no flesh-and-blood lover ever saw….I thought Joan Crawford would never die. Come to thinkof it, as long as celluloid holds together and the word Hollywood means anything to anyone, she never will.”