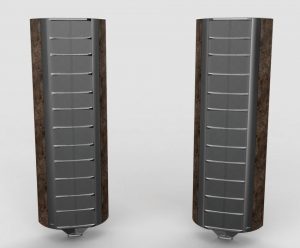 Its been a while since we had a look at some high-end audio, so to break our hiatus we decided to take a look at the most recent offering from US manufacturer Wisdom Audio. So, for those that don’t know, Wisdom Audio is a leader in the design and manufacturing of high-performance planar magnetic transducers for architectural speaker applications. Founded in 1996 with one goal in mind, to create the world’s finest loudspeakers, Wisdom Audio have continued to  create no-compromise planar loudspeaker systems for the most demanding and critical audiophiles employing proprietary, custom-made planar magnetic and dynamic transducers optimized for high performance, high-end architectural audio reproduction applications. At the back end of 2010 Wisdom launched the Wisdom Audio LS3 and LS4 speaker systems.

About the wisdom audio Ls3 and Ls4 speaker systems

Their latest offering to the world of high-end audio is the Wisdom Audio LS3 and LS4. These modular line loudspeaker systems feature extremely high efficiency, a huge dynamic range and of course superb sound quality. According to Wisdom Audio, these speakers are ideal for high-performance music rooms, opt of the range home theatres and professional post production screening rooms. Customer feedback was paramunt in the creation of these loudspeaker systems, Wisdom Audio identified a niche in the market that addressed the ultra high-end audio market where high sensitivity and maximum SPL were critical. So what’s the difference between the Wisdom Audio LS3 and LS4 models? Essentially the Wisdom Audio LS3 is three-quarters of an LS4, the LS3 is still a supremely capable speaker. A single LS3 has a sensitivity of 98 dB for 2.83 volts input and is capable of reproducing sound pressure levels in excess of 127 dB at 4 meters. The 64-inch tall line source driver complement offers identical performance characteristics as the LS4, with only a difference in sensitivity and maximum attainable sound pressure level.

Unlike conventional speaker systems that typically incorporate various combinations of cone and dome drive units, the Wisdom Audio LS3 and LS4 models feature their newest planar magnetic line source drivers. A two-way system, each module features dual high efficiency and ultra-high output upper bass/lower midrange planar magnetic drivers that handle frequencies from 80 Hz to 750 Hz. From there, the high efficiency
and ultra-high output upper midrange/tweeter planar magnetic driver covers the rest of the entire audible range, with flat response extending to beyond 20 kHz. Compared to conventional loudspeakers, which often cross over from the midrange driver to the treble driver in the 3 kHz range (where the human ear has the widest dynamic range and therefore the greatest sensitivity to acoustical aberrations), Wisdom Audioʼs wideband planar magnetic technologies provide the ability for the treble driver to cover a much wider range than is possible with a conventional tweeter, eliminating the audible degradation associated with conventional loudspeaker crossover configurations.
As the systems are bi-amplified, there are no conventional passive crossovers employed, and the systems present a purely resistive load to the amplifiers, assuring power amplifier stability even at exceptionally elevated output levels.

The technical specifications are indeed beyond impressive. For example, the Widom Audio LS4 features ultra-high efficiency (100 dB at 1 watt/2.83V), along with ultra-high power handling, allowing the system to generate clean, undistorted sound levels to beyond 130dB, completely avoiding the dynamic compression at elevated listening levels that plagues conventional cone and dome loudspeakers. The Wisdom Audio LS3 features similarly high efficiency and dynamic range capability, to ensure flawless reproduction regardless of the size of the music room, home theater or screening room.

The look of the Wisdom Audio LS3 and LS4

Housed in an elegant, curved arc enclosure, the systems feature a unique aesthetic profile, creating a design that expresses the power, musical clarity and detail of the Wisdom Audio LS4ʼs amazing speaker technology and visually informs the listener that they are about to experience something completely new. The inspiration was to expose the structure of the 12 beautifully CNC machined aluminum driver frames with stainless steel micro perforated covers to create a spine, flanked by two burled walnut panels that all converge at one finite point – technology perfectly balanced.” Additional finishes will be available, including matte black for behind-the-screen installations. As the depth of each on-wall enclosure is only 12 inches, customers also have the option of working with their interior designers to conceal otherwise visible LS4s and LS3s behind decorative, acoustically transparent cloth for a completely hidden and integrated installation.

What’s behind the grille of the Wisdom Audio LS3 and LS4?

Optimized System Integration
The Wisdom Audio LS3 and LS4 are designed to optimally mate with Wisdom Audioʼs STS Regenerative Transmission Line® subwoofer, which features the same combination of ultra-high efficiency and dynamic range. With an in-system (externally crossed over) frequency response from 15 Hz to 80 Hz and an efficiency of 101 dB at 1 watt/2.83V, the STS has the dynamic range to handle the deepest bass notes even at extreme
output levels as high as 130 dB without distortion or strain. A reference level music system, home theater or screening room/post-production configuration will feature dual STS subwoofers mated to LS4s, LS3s or a combination of the two.

The Wisdom Audio LS3 and LS4 systems were unveiled at the International Consumer Electronics Show in January, and is available for purchase and delivery now.