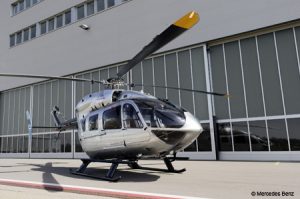 “Only one year after Eurocopter presented the EC145 Mercedes Benz Style concept at EBACE 2010, we now are unveiling the first aircraft and can announce the initial sale in this high-end helicopter series to a corporate operator” said Olivier Lambert, Eurocopter’s Senior Vice President Sales and Customer Relations. “These achievements confirm Eurocopter’s successful approach in developing products that meet the demanding expectations of executive and private customers worldwide.”

The interior of the Eurocopter EC145 Mercedes Benz Style Helicopter 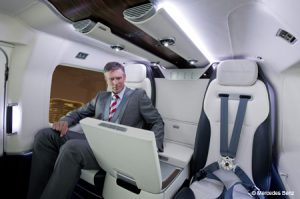 With its luxurious interior, the Eurocopter EC145 Mercedes Benz Style helicopter is tailored to a broad range of travels: executive transportation, family voyages, as well as leisure and sport trips. All of the seats are mounted on rails and can be reconfigured for different seating arrangements from four to eight passengers – or removed to make room for luggage. Multi purpose storage is made possible by numerous attachment points on the floor and walls.

The Eurocopter EC145 is the perfect match for Mercedes Benz luxurious styling, as this turbine-powered aircraft is at the top of its class in the medium-sized, twin-engine helicopter category. It combines Eurocopter’s leading-edge developments in cockpit design and avionics, while also incorporating a hingeless rotor system and enhanced rotor blades that reduce sound and vibration levels. More than 400 Eurocopter EC145’s have been sold around the globe for a full range of operations, and is the only helicopter of its type that can seat up to eight passengers.

Eurocopter offers the widest helicopter range in executive and private aviation, comprising 12 different model types in the light single-engine, light/medium twin-engine and heavy twin-engine categories, which accommodate from four to 19 passengers in executive and private configurations. More than 500 helicopters have been sold in these market segments during the past four years to customers ranging from private owners and charter companies to small/medium enterprises and multi-national corporations.