The next-generation Eurocopter EC175 will incorporate significantly increased range and payload capacity when it enters service at the end of this year, and will be the first seven metric ton-category helicopter delivered with such capabilities.

In releasing EC175 enhanced performance specifications today, Eurocopter announced a baseline payload/radius-of-action capacity with 16 passengers at 135 nautical miles when configured for offshore oil and gas missions, out-performing any medium-lift helicopter on the market in terms of competitiveness. This represents a 30 percent performance increase compared with the initial performance baseline. For longer-range missions, EC175 can transport 12 passengers to a radius of action of 190 nautical miles. 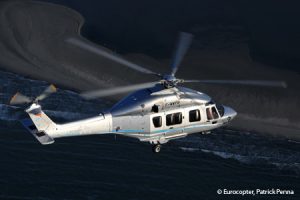 In addition, Eurocopter has launched the development of a 18 passengers configuration option, aiming at carrying those 18 passengers to a radius-of-action of 100 nautical miles.

“Eurocopter has maintained a two-way dialog with operators and end-users throughout the EC175’s development program, providing us with an ever better understanding of their operational needs from 2012 and beyond,” explained Eurocopter President & CEO Lutz Bertling. “As a result, we have incorporated certain adaptations that will further improve the helicopter’s operational capability, placing it ahead of the competition from its entry into service.”

The EC175 program is progressing well, with first deliveries targeted in late 2012 following certification in the offshore mission configuration with the enhanced performance.

Ongoing testing continues to validate the EC175’s rugged design, including cold and hot weather trials, bird strike tests, and gearbox operation for 30 minutes after loss of oil. Two EC175 prototypes have logged more than 270 flight hours to date and industrial activity is continuing – with the first two serial aircraft being assembled at the Eurocopter’s Marignane facility in France.

The EC175 offers state-of-the-art proven technology. It has been designed in cooperation with the most demanding operators to deliver the highest safety standards for passenger transport. This includes unique flight envelope protection and pilot assistance with the most advanced 4-axis dual-duplex automatic flight control system – derived from Eurocopter’s EC225 helicopter – and a highly intuitive new avionics and human machine interface. Pilot workload is decreased as the result of better situational awareness and the help of an innovative crew-alerting concept, supported by a powerful vehicle monitoring system.

The Spheriflex rotor-equipped EC175 also offers unrivalled comfort with a very low vibration level that is similar to the benchmark EC155. Incorporating the largest cabin in its class, the EC175 is fitted with extra-large windows and an optimized climate control system that functions while in-flight and on the ground through an engine declutch function.

With its superior standard internal fuel tank capacity of more than 2,000 kg and its spacious interior, the EC175 is the most capable search and rescue helicopter in the seven-to-eight metric ton category, providing the longest range/endurance capability with cabin volume that enables MEDEVAC search and rescue missions to be performed.

Eurocopter will support its EC175 operators for an easy entry into service, facilitated by on-board maintainability- and reliability-enhancing features such as a monitoring system with an on-ground maintenance reporting capability to facilitate troubleshooting, HUMS (health and usage monitoring system), 3D technical publications, full-flight simulators, optimized scheduled maintenance through MSG-3, and a continuous maintenance review board process incorporating input from operators. All of this will be complemented by the Eurocopter Group’s support organization and the establishment of dedicated entry-into-service services.