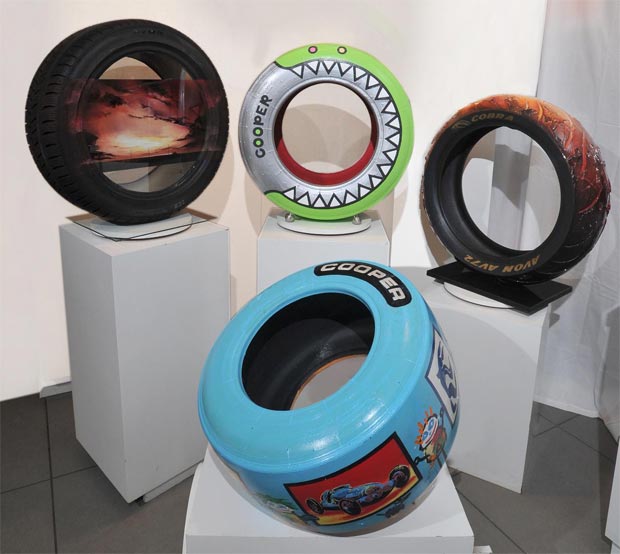 Most people think of tyres as round, black things you fit to your car. 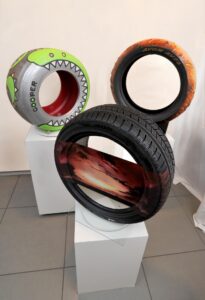 The quartet was commissioned to turn a selection of road and race tyres into unique pieces of artwork.

Based on three themes relevant to the products and motorsport heritage of Cooper and its Avon Tyres brand, the artists spent a combined 257 hours transforming the tyres they were given into pieces of art, which will be displayed at Artica Galleries, South Molton Street, London (part of the Castle Galleries group) until 17 February 2012.

Sarah McRoberts, Marketing Communications Manager for Cooper Tire Europe, said, “When you look at the detail that goes into creating a tyre and compare it to the detail each artist has used within their designs, the end result is remarkable.”

The diamond anniversary of the British Formula 3 International Series was an inspirational theme for artists using the Cooper F3 motorsport tyre.

Meanwhile, artists who received a motorcycle tyre used the theme ‘100 years of motorcycle tyres’ as a driving force to commemorate Avon Tyre’s 100th anniversary of producing road-going motorcycle tyres and those given Avon’s winter tyres incorporated a ‘winter’ theme.

“As soon as I received my tyre, I knew I wanted to give the illusion of movement,” said contemporary abstract artist Stephen Simpson. “I’m proud of the fact I’ve had the opportunity to work on a piece of art that has given me ideas to take my style forward.”

An abnormal canvas led to something out of the ordinary for artist Stefan Marner, “Learning to work with a different surface has given me a broader spectrum of ideas with my designs. This time round, I used a variety of materials: aluminium, brass and metallic paint.”