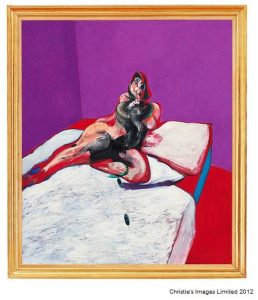 On February 14 Christie’s will offer the extraordinary Portrait of Henrietta Moraes in their evening auction of Post-War & Contemporary Art in King Street, London. Having remained in the same private collection for almost thirty years, this rare painting depicts the artist’s close friend and model Henrietta Moraes and comes to auction for the first time (estimate upon request; 65 x 56in. / 165 x 142cm.).

Francis Bacon (28 October 1909 – 28 April 1992), was an Irish-born British figurative painter known for his bold, austere, graphic and emotionally raw imagery. Bacon’s painterly but abstract figures typically appear isolated in glass or steel geometrical cages set against flat, nondescript backgrounds. He began painting during his early 20s and worked only sporadically until his mid 30s. Before this time he drifted, earning his living as an interior decorator and designer of furniture and rugs. Later, he admitted that his career was delayed because he had spent too long looking for a subject that would sustain his interest.

‘Searing with raw colour and texture, Portrait of Henrietta Moraes is one of the most seductive and sexually charged paintings I have ever encountered by Francis Bacon. The carefully constructed mood through colour is forcefully invaded by the extraordinary swipes of the loaded brush, which create the woman’s voluptuous figure. This juxtaposition of the sheer beauty of colour with the brutal physicality of paint is what makes Bacon’s art so remarkable. Executed in 1963, this painting was undertaken in a landmark year, which saw the artist perfect his technique. It followed a period of intense experimentation in which Bacon investigated the properties of paint and the architecture of the human form. This turning point is widely acknowledged; 3 out of the 7 large-scale paintings created in 1963 now form parts of major international museum collections including The Louisiana Museum of Modern Art Humlebæk, National Museum of Wales, Cardiff and the Tate Gallery, London. In the same year, Bacon also created a small-scale triptych Three Studies for Portrait of Henrietta Moraes (1963) currently held in the Museum of Modern Art. In a similar manner to the MoMA painting, Portrait of Henrietta Moraes is built up from a ground of papal red, which acts as a silhouette both in image and metaphor. The work has only had two owners since the day it was made, one of which was the important collector and post-War industrialist Willy Schniewind and the other being the present owner, a distinguished New Yorker who acquired the work in 1983. Portrait of Henrietta Moraes has not been seen in the public eye for fifteen years and I am very excited to be presenting this important piece of British art in London’.

Portrait of Henrietta Moraes was painted by Francis Bacon towards the end of 1963, the year after his breakthrough retrospective at the Tate Gallery, London in 1962, and the same year as his first major American exhibition at Solomon R. Guggenheim Museum, New York. For many years, the work formed part of the Schniewind collection of important post-War paintings, the present owner acquiring it from the family in 1983, almost thirty years ago.

Portrait of Henrietta Moraes represents part of the pantheon of great paintings by Bacon executed in 1963, the majority of which are now housed in major international museum collections. Over the preceding four years, Bacon had devoted himself to investigating the properties of paint, technique and undertaking studies of the human nude; a subject that he had rarely dared consider in his early career. Standing out proudly from a vivid lilac ground, Henrietta lies undressed in all her voluptuous glory on a simple ticking mattress. For Bacon, this visceral quality and the sheer physicality of his model’s body was a source of constant rapture. Indeed he returned to Moraes as a subject for numerous paintings over the course of his career including Three Studies for the Portrait of Henrietta Moraes (1963) held in the Museum of Modern Art, New York. In Portrait of Henrietta Moraes Bacon imbues the painting with a striking passion, as if carried over from the intensity of his own personal life. This was the year that Bacon embarked upon his all-consuming love affair with George Dyer, immortalising his partner in his first painting.

Whilst Bacon had often considered the figure of the male nude, his depictions of Moraes were the first to seriously consider the female form. As David Sylvester once observed: “Bacon’s lack of personal erotic interest in naked females did nothing to prevent these paintings from being as passionate as those of the male bodies that obsessed him”. Moraes herself was a notorious bonne vivante, a regular fixture at the artist’s favourite haunt, the Colony Room, Soho. The muse to a number of contemporary British artists, she was once the lover of Lucian Freud and appeared as the sitter in his Girl in a Blanket (1952). Bacon only ever depicted friends and never painted his subjects from life, preferring to use photographs instead. For Portrait of Henrietta Moraes, Bacon commissioned John Deakin, his friend and feted photographer to take a now renowned series of images that he would translate into his paintings.