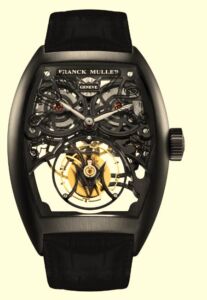 The new Giga Tourbillon is a truly exceptional model which required an extremely accurate development. The Franck Muller research and development department has once again drawn on all its expertise to carry off this remarkable technical feat.

As the name implies, its special feature is a very large 20 mm diameter Tourbillon that fills half the watch. Another special feature is that its movement has been reversed, with the bridges found on the dial side, while the hour setting and winding section are at the base and the hour hand is positioned on the minute hand.

In order to ensure a 10-day operating reserve, displayed at midday, (traditional winding by the crown), the Giga Tourbillon has been designed with four barrels, in contrast to traditional tourbillons which generally have only one or two. The barrels are first assembled in series to double the operating reserve, and then they are connected in parallel to double the power of the movement.

The barrels have a diameter of 16 mm, i.e. 4 mm more than traditional ones, which provides them the almost constant force needed for the Giga Tourbillon to operate.

The high-yield escapement, entirely developed at Watchland, drives a balance wheel whose inertia moment is four times higher than that of a traditional tourbillon, which explains the characteristic noise that evokes the sound of a Marine chronometer. To fans, this sound will be like sweet music is to the ears of musicians.

The balance wheel, which oscillates at a frequency of 2.5 Hz, requires a very large spiral, number CGS 10.6, which was also developed exclusively by the Franck Muller Group.

Once again, Franck Muller has confirmed its mastery of the Swiss watchmaking heritage in the very complex field of great complications.

A skeleton version which combines aesthetics with rigidity reveals a highly technical mechanism and perfect styling. The Giga Tourbillon will be a joy to connoisseurs and fans of exceptional timepieces. A true collector simply could not pass up the opportunity of owning this masterpiece.