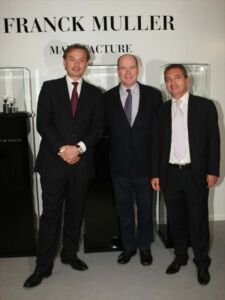 Franck Muller decided to participate in the Top Marques of Monaco for the very first time, the event was held from 14th to 17th April 2011. During Top Marques Franck Muller exhibited its most beautiful models, including  the Giga Tourbillon, the Black Croco or the most complicated wrist watch in the world, the Aeternitas Mega. The Top Marques event was originally for cars, but over the years the fair has created several editions including a section for watches named Top Marques Watches and a yachts section as well. Within the Grimaldi Forum Monaco, Top Marques has opened its 8th edition with a parade of beautiful cars, spectacular yachts and exceptional timepieces.

Traditionally held under the spectacular glass-domed atrium, Top Marques Watches has expanded this year to the Salon Guelfe to accommodate the science of time. Over 20 brands have showcased luxury and limited edition timepieces as well the finest collections from six of the best jewellery houses. Top Marques Monaco has the privilege of being placed under the High Patronage of HSH Prince Albert II, who has traditionally visited the exhibition. Positioned as one of Monaco’s most prestigious event and proving itself to be one of the most successful B2B and B2C platforms, it continues to attract visitors, connoisseurs and mechanic lovers from all over the world.

This year, a large crowd over 33’000 people have attended this important event which combines the mechanical art and the micro-technology art on the legendary “Rocher”. In less than 20 years the Franck Muller brand, founded in 1992 by the watchmaker, Franck Muller, in association with Vartan Sirmakes, has become a reference in the Haute Horlogerie world because of its technical expertise and innovative design. Today the House holds more than 50 patents, 47 exclusive boutiques throughout the world and 7 production sites in Switzerland.