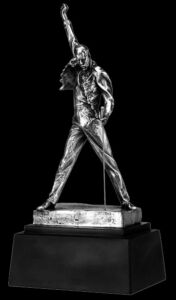 This 1/8th scale pewter figurine is a replica of the Freddie Mercury statue on Lake Geneva which was sculpted by Czech artist Irena Sedlecka. Irena was a Laureate of the State in the early fifties and now lives in London. She is a Fellow of the Royal Society of British Sculptures and a member of the Society of Portrait Sculptures.

This is a magnificent and lasting tribute to the front man of Queen, one of the true icons in music.
Height 18 inches.
Weight nearly five kilogrammes

The following is the Bio of Irena Sedlecká
Irena Sedlecká (born September 7, 1928 in Plzeň, Czechoslovakia, nowadays Czech Republic) is a Czech sculptor, a Fellow of the Royal British Society of Sculptors, After training at the Academy of Fine Arts in Prague, she was awarded the Lenin Prize for sculpture before fleeing the communist regime in 1967, she then went to Chile where a sympathetic socialist government was in power, lead by Salvador Allende. When Allende was ousted by an American backed coup in 1973, she then went to Colombia, finally coming to Britain. Her first commission in Britain, was from Kathleen Hunt of Walthamstow, it was a 70 cm resin statue, of the Virgin Mary and Jesus [ THE MADONNA ] this was in 1975. She has sculpted many monumental and bust Portraits including; Freddie Mercury of Queen, now in Montreux, Switzerland; Beau Brummell in Piccadilly, London and many in private collections. Married several times, lastly to Franta Belsky, sculptor, who died 2000.
Commissioned portrait heads include Laurence Olivier (she also modelled the huge head used for his appearance in Dave Clark’s musical TIME at the Dominion Theatre), Donald Sinden, Paul Eddington, Richard Briers, Jimmy Edwards, Bobby Charlton, Lord Litchfield, Sir Frank Whittle. In August 1992 her work was shown at the Czech Embassy in London as part of an exhibition devoted to the work of five distinguished Czech émigré sculptors.