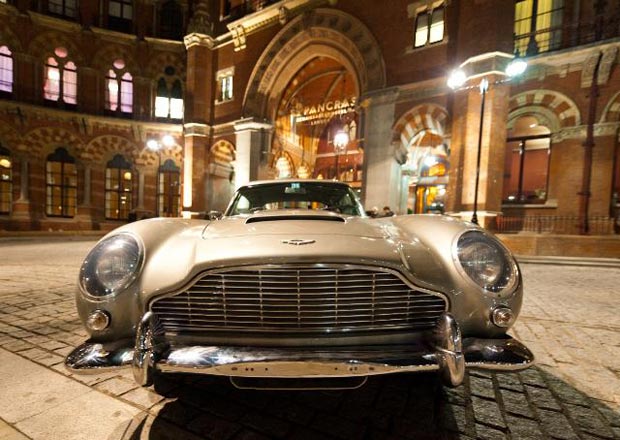 Thirty six cars worth more than £6.million, including an Aston Martin DB5 owned by George Harrison, a Cord 810 Phaeton owned by Jimmy Page and Duncan Bannatyyne and a Mercedes Benz 300 SL Roadster stored in an Edinburgh garage for the last 23 years are to go under the hammer in London next week.

The cars along with a huge collection of movie posters are to be sold at the COYS True Greats auction, which will be held at the Royal Horticultural Halls in London on Wednesday December 7th. “There are some extremely interesting cars on offer which could be the ultimate Christmas present,” said Managing Director of COYS Chris Routledge. He added: “The classic car market is one that is still buoyant and many people are looking at cars as an investment that is also fun. He added:” We are seeing traditional investors moving away from financial markets and looking at investments that are more tangible.”

On Wednesday Model and photographer Patti Boyd, who was married to George Harrison when he owned the DB5 was re-united with the car when it was showcased at the St Pancras Renaissance Hotel. Patti and a host of other celebrity photographers attended a Gala evening at the hotel to raise money for Variety Club the Children’s Charity. Led by celebrity photographer, Alistair Morrison, 25 of the UK’s top photographers had just completed an incredible project. Between them, they photographed 110 fabulous pictures of landscapes, famous individuals, children and extraordinary people in and around the stunning, newly refurbished London St. Pancras Renaissance Hotel.

Manufactured in late 1964, DB5/1896/R was supplied new on January 1st 1965 through Brydor Cars of Brooklands to Beatle George Harrison.

By the late 1980’s the DB5 had found its way into a museum in Tokyo, Japan. In 1995 it was purchased by a Japanese collector resident in Germany, where it was exported to join the rest of his collection. Purchased for the collection in 2007, the DB5 has been maintained in a largely original and unrestored condition. Chassis DB5/1896/R is now presented in very nice general order, with a recorded mileage of just over 22,000 miles. The paintwork has clearly received some attention over the years and is in good order. The delightful patina on the leather seating surfaces and the condition of the roof lining and carpets leads one to believe that they are the originals while the internal door trims appear to have been refinished to a high standard relatively recently. The instrument panel and wood rimmed steering wheel likewise appear to be original. The engine compartment is also largely original and shows the signs of some recent maintenance. The DB5 starts and runs well and shows no signs of major mechanical maladies. The provenance of chassis DB5/1896/R is confirmed by a letter from Aston Martin, the history file includes a copy of the original build sheet and documents relating to the importation of the car into Germany.

Chris Routledge said: “ We are delighted to offer for sale George Harrison’s first “important” car, bought new and delivered to him personally in 1965 at his Kinfauns estate in Esher, Surrey, England.

He added: “We are offering a once-in-a-lifetime opportunity to acquire not only one of the most collectible of the David Brown Aston Martins produced, in very original condition, but one that has been owned by arguably one of the most influential musicians ever to grace The Earth.”

For many the 1936 Cord 810 Phaeton being offered at the sale is the purest version of the famous Cord shape, and certainly one would have to search long and hard for the condition of the specimen being offered.

It is believed that the car entered the UK some time in the 1970s, and it was probably shortly after that that the car came into the hands of the remarkable Jimmy Page. Obviously his fame will rest principally on his legendary associations during the 1960s with the Yardbirds, but his legend really took off after that with the formation and subsequent massive success of Led Zeppelin. One interesting secondary aspect of his interests, however has been to own some truly beautiful country houses, and also some very remarkable cars. The most recent owner reports that today’s Cord Phaeton was the recipient of a concours standard restoration while in Jimmy Page’s hands some ten or twenty years ago, and the current condition argues forcefully that the work must indeed have been to a more than ordinarily high standard, and the car subsequently meticulously kept while he had it, and even more so during its most recent decade in other equally dedicated hands of its former keeper Duncan Bannatyne; entrepreneur and ‘Dragon’ from BBC TVs Dragon Den.

The Coachwork, still dramatic and beautiful after seventy five years, is finished in a lightly metallised (as was available from new) shade of Royal Blue, matching a closely-1958 Mercedes Benz 300 SL Roadster

“The finding of this remarkable Mercedes just goes to prove what is still out there waiting to be discovered,” said Chris Routledge,” and we have received calls about the car from all over the world.”

In 1952, the original W194 300SL race car managed second and fourth places at its first outing, the Mille Miglia and scored overall wins at the 24 Hours of Le Mans, in the sportscar race of the Eifelrennen at the Nürburgring, and in Mexico’s Carrera Panamericana.

New York based US Mercedes Importer Max Hoffman, certain that a market for such a car existed, approached Daimler-Benz management in Stuttgart requesting a road going version. Legend has it that Hoffman was forced to produce 1000 firm orders before Mercedes would concede that there was indeed a market for such a vehicle and engineer the car for the road.

These iconic sports cars have in recent years proved to be one of the best ‘blue chip’ investments as their popularity continues to grow.

Supplied new to the United States, as most 300SLs were in 1958, chassis 8500299 was first registered in the UK in 1962. The V5 states that there are only 3 previous owners on record, the most recent of which was an Edinburgh businessman and it is understood that the 300SL was in regular use by him until 1988 when it was taken off the road.

Recently gently rolled from its garage for the first time in over 20 years, 3 DXC is still in its original DB180 Silver with red leather trim, fitted with its original engine and a rare, desirable factory hard top and has been upgraded with the more desirable European headlamps. A Becker radio cassette is mounted below the dash.

Supplied with UK V5C, a few receipts dating from 1988 and two sets of keys, this sought after roadster is complete except the soft top and has a little over 13,000 miles recorded on the odometer.

With the increase in values of 300SLs in recent years, unspoilt candidates for restoration such as this are becoming very hard to find. It is estimated at £225,000 – £275,000.