In October 1707, the English admiral Sir Cloudesley Shovell made an error when estimating the longitude of his squadron of warships. As a result, the squadron ran aground on the Scilly Isles off the south-west coast of England and was wrecked, causing the deaths of some 2000 men including the admiral himself. 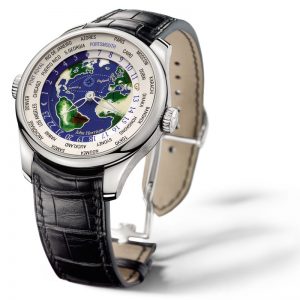 This disaster, which occurred when the expansion of the British Empire across the world’s seas represented a major political and economic issue at the time, led the government to rally the entire scientific community around a single common project: calculating longitude at sea. In 1714, the British Parliament passed the Longitude Act, offering a reward of 20,000 pounds (the equivalent of several million dollars today) to anyone who could find a method of calculating a ship’s longitude to within half a degree (approximately 30 km).

Leading scientific minds of the era studied the subject closely, as did the watchmaker John Harrison, whose approach promised the great advantage of simplicity. His idea was to use a clock to measure the time difference between the journey’s starting point and the ship’s current position. Because the Earth completes one full revolution in approximately 24 hours, each hour thus represents 15 degrees of rotation, or 15 degrees’ difference in longitude. By measuring the difference between the exact local time at the ship’s position (determined using a sextant) and the exact reference time (at the point of departure, indicated by the clock) the longitude of the ship can be calculated. The challenge was therefore to create a clock that would maintain its accuracy even when pitching and rolling on the world’s roughest seas.
Making this timepiece became John Harrison’s eternal quest. This self-taught watchmaker, who was born on 24 March 1693 and had been trained as a carpenter, devoted his entire life to developing reliable and accurate timepieces. He built new types of mechanisms based on the work that Christian Huygens and Robert Hooke had carried out on the spiral spring, and used brass and steel alloys to reduce the effect of expansion and contraction.
In 1773, after many successes and failures, the spectacular performance of his H4 watch was recognised and earned him part of the reward promised in the Longitude Act. The bitter rivalries surrounding the prize and the ambiguous conditions imposed to obtain it meant that the total amount was never awarded in full.

The dial of the Girard Perregaux John Harrison watch depicts the journey undertaken by John Harrison’s son William from Portsmouth, England, to Port Royal, Jamaica, against a map of the Atlantic Ocean. The trip lasted from November 1761 to March 1762 and was intended to test the reliability of the H-4 timepiece, which was much smaller than the first prototypes developed to calculate longitude. The H1, for example, weighed 32.5 kg. 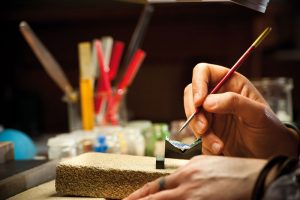 The dial of the Girard Perregaux John Harrison

The dial of the Girard Perregaux John Harrison watch offers a superb example of delicate champleve enamel, produced in the enamelling workshop of the Girard Perregaux Manufacture. The contours of the map are engraved on an unprocessed plate of white gold, while the compass rose, showing the eight directions of the wind and measuring no more than 3 mm, is hand-sculpted by a craftsman-engraver. The liquid green and blue enamel is laid into the cavities using a brush. Next comes the firing, timed to the minute in a furnace at 800c, to create the magic of vitrification. After cooling, the excess enamel is removed from the the Girard Perregaux John Harrison watch by vigorous sanding using a hard stone and water. The dial is then manually polished with a diamond file, before a last firing called “Dorure” or gilding adds shine and reveals the enamel’s full splendour. William Harrison’s journey is delicately indicated by a trace of silvered powder stretching from Europe to America.

Echoing the dialof the the Girard Perregaux John Harrison watch Portsmouth and Port Royal are highlighted in royal blue on the cities ring, which is activated by the white-gold crown and delicately engraved with the GP logo at 9 o’clock. Universal time, as distinct from local time, can be instantly read off from the blue/white hours ring using the rhodium-plated leaf-shaped minutes hand.

The hands are also subtly skeletonised, adding exquisite elegance and discretion to their ballet around the enamelled dial. The alternation of satin-brushed and polished finishes on the white-gold case adds a sense of distinguished finesse to its beautifully balanced proportions.

The transparent case-back on the Girard Perregaux John Harrison watch reveals the 033G0 automatic calibre, which is widely recognised for the excellence and reliability of its construction. It is fitted with an ingenious coupling mechanism that activates the bicoloured ring indicating the time in 24 time zones. As an ultimate tribute to this fabulous journey in watchmaking history, the pink gold oscillating weight is engraved with a parchment bearing the dates on which the H-4 started and finished its Atlantic crossing.

The Girard Perregaux John Harrison watch is available in a limited series of 50 individually numbered timepieces.