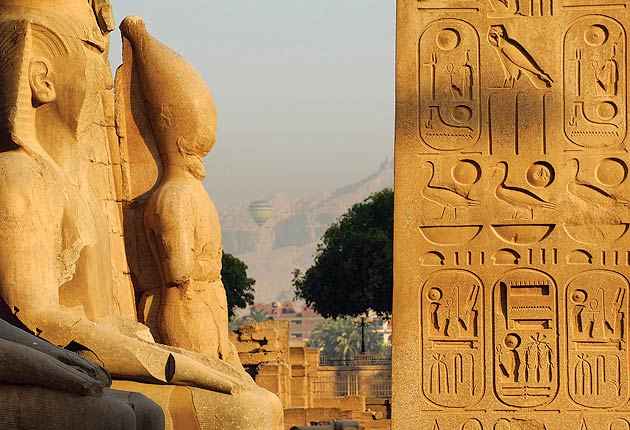 Luxor has frequently been characterised as the ‘world’s greatest open museum’ with the ruins of Karnak and Luxor temple standing in the city. And now with work underway to join the two temples together by way of reviving the 2.7km walkway lined with sphinxes, this statement in the future will seem like an understatement.

The existing Avenue of Sphinxes is already one of the most important archaeological and religious paths in Luxor, as it was the location of important religious ceremonies in ancient times.

For a perfect introduction to ancient Egypt, you can’t beat a Nile cruise. So our journey begins aboard the Royal Viking Nile Cruise from Luxor hoping on and off to see the amazing ancient tombs, temples and other monuments. And where to begin? From Karnak and Luxor temples themselves – right in the heart of Luxor city.

Our tour guide Akhmed – also an Egyptian historian – is invaluable throughout the trip. I soon realise that you can happily see the jaw-dropping sights of Egypt but without explanation they won’t mean much. This temple is believed to be the second most visited historical site in Egypt, only the Giza Pyramids near Cairo receive more visits. One famous aspect of Karnak is the Hypostle Hall – an area of 50,000 square foot with 134 massive columns arranged in 16 rows.

Luxor temple is equally beautiful. Akhmed explains like other Egyptian structures a common technique used was symbolism or illusionism. For example, at the Luxor temple, the two obelisks (the smaller one closer to the west is now in the Place de la Concorde in Paris) flanking the entrance were not the same height but they created the illusion that they were.

The Avenue of the Sphinxes as mentioned above, is undergoing a major redevelopment. Many of the sphinx statues were lost as roads and houses were built on top of them. Now a huge project, which includes shifting existing residents to new homes costing 400 million Egyptian pounds alone, is underway. On completion, there will be 1,350 sphinxes linking the two temples.

Never was it more true to witness Egyptians using symbolism in their creations than in the tombs. Some of the most wonderful tombs can be found in The Valley of the Kings. And while most of us are preoccupied by life, the pharaohs seemed to be pre occupied by death. The order to work on a tomb couldn’t be given to the workers quick enough. It was understandable to see why. The underground tombs took years of dedicated meticulous carving and painting to finish. Some of those colours untouched by the suns’ rays, can still be seen as vividly as they would have done when they were originally painted.