Pierre DeRoche GrandCliff Milady Royal Retro Watch – Giving Engineering a Feminine Face
Women also love fine mechanical watches. And it is to them that Pierre DeRoche has dedicated this superb interpretation of the Calibre Royal Retro. With its display of six retrograde seconds hands, the movement is unique in its genre. These hands, on the visible movement, take over 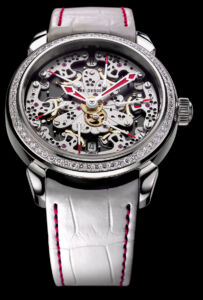 from each other for ten seconds, creating a fascinating mechanical ballet and making each minute seem like a moment of eternity. This magnificent complication is enhanced by the finishing, which is designed by a woman for women and gives this timepiece a poetic and floral touch. The elegantly-shaped bridges are adorned with delicate motifs, highlighted by a subtle setting of jewels. The bezel, also set with jewels, adds a touch of sublimity to this harmoniously designed piece.
A watch that women will love a little, a lot, passionately, or to distraction. 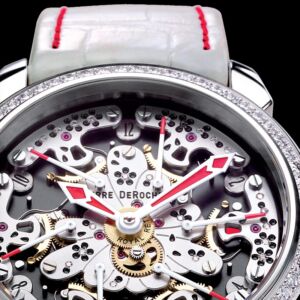 The Story Behind Pierre DeRoche
Mechanics has always been in the genes of Dubois family, watchmakers as well as trailblazers for four generations. In 1937, Marcel Dépraz, the great-grandfather of Pierre Dubois, CEO of Pierre DeRoche, developped a chronograph movement that was revolutionary for its time. More than 3.5 million pieces were produced until 1970. His grandson Gérald Dubois, Pierre’s father, invented the first automatic chronograph. And, not wanting to be outdone, the present generation of Pierre Dubois and his two brothers, Jean-Philippe and Pascal, invented the concentric chronograph, a Pierre DeRoche exclusivity. These three brother are certainly not lacking in ideas. Together, they have developed the first movement in the world able to  house six retrograde seconds mechanisms, a little revolution presented at Baselworld 2009. The idea grew out of a passionate discussion around the family table, proof that the “horological chromosome” of the Dubois family is transmitted from generation to generation: a promise of wonderful surprises to come! And in fact, the name Pierre DeRoche already came across Pierre Dubois’ mind when he was a child…inspired by his grandfather Reynold, who used to tell him that his Christian name meant “rock”!*