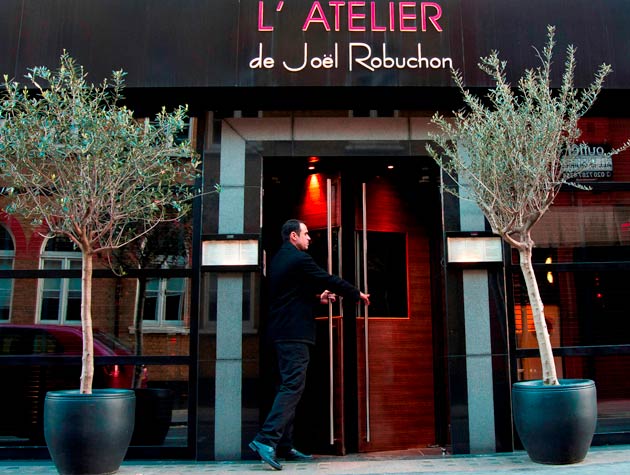 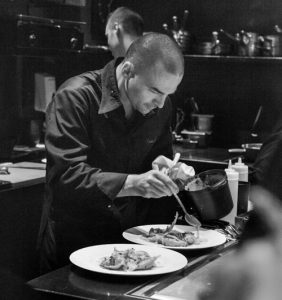 Sharing the same street as The Ivy, the restaurant houses around 90 covers at a time and is split over three floors, with that at road level (L’Atelier) offering a distinctly Japanese inspired ambiance, the second (La Cuisine) bringing a more traditional seating arrangement, whilst a roof terrace graces the top of the building.

Sitting on high leather-clad stools, we dined on the subtly-lit ground floor which carries a distinct black and red theme, where glass cabinets illuminate different types of squashes and where walls are dressed in frames housing different types of spices, peppercorns and mustard seeds. At the far end of the room, there is even a display of vegetation which drops from the ceiling. The heart of this restaurant (on both floors) is dominated by the open kitchen where guests are entertained by the sublime creations being carved by the very calm and relatively small team of ‘artists’.

There is an impressive selection of dinner menus on offer which range from the à la carte to the eight-course French matching menu, and all dietary requirements are very well catered for. We sampled a five-course selection which started with a basket of fresh bread accompanied by French salted butter and Spanish olive oil. This was closely followed by an exquisite amuse bouche (pre-starter) of aubergine caviar and red pepper coulis layered delicately in a shot glass, a perfect way to bring the palate alive for what was to come. 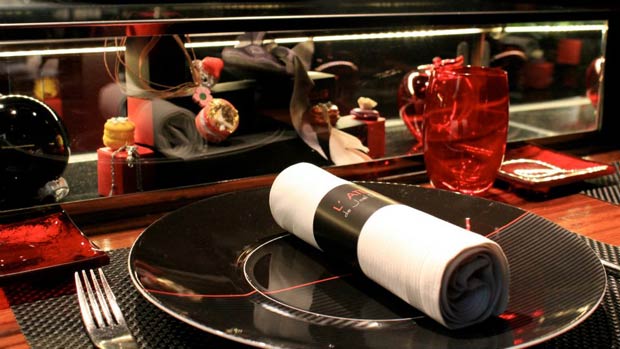 Joined by a 2013 bottle of Rivaner Domaine Clos des Eglantiers white wine from the Moselle region of Luxembourg, the starter was “La Dorade”, which translated as a square of thinly sliced sea bream carpaccio, marinated in lemon and lime and decorated with fine granules of Espelette chilli pepper. I was in heaven and could have easily eaten a few more rounds, as this dish simply melted in your mouth. My dining partner sampled a fine bean salad with eggs mimosa, radish and shavings of duck foie gras, topped off with a wasabi dressing. Both starters were extremely impressive, an experience which was to be repeated throughout our evening. 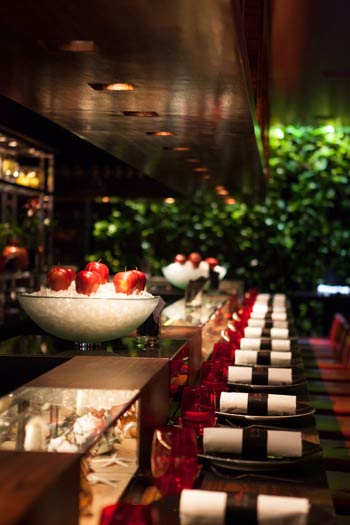 My next chapter was “Le Tofu”, which consisted of flavoursome and crunchy breaded tofu and avocado served on a bed of artistically drawn teriyaki sauce lines and decorated with radish and lettuce. My guest opted for “L’Oeuf de Poule”, crispy poached egg on a bed of beli peppers which also disappeared with ease.

For the main course, I had roasted salmon which sat on Mousseline sauce, complemented by a deliciously-creamy side dish of smooth mashed potato. My dining companion opted for the duck breast which was joined by a sumptuous confit and caramelised figs. The absolute pièces de résistance however were the desserts, and just to make sure that this was an experience not to forget, our placemats were replaced and lined up exactly parallel to the edge of the table as if to signal that a masterpiece was going to come before us, and some works of arts did indeed arrive. They took the form of a light and airy chocolate soufflé with a soft oozing centre (which even had L’Atelier’s logo on the top!), next to a ball of refreshing strawberry sorbet. I had the pleasure of tasting a cheesecake with lime zest, strawberries and sorbet, all decorated beautifully with a tuile of white chocolate and morsels of hydrated yoghurt.

To sum up this establishment, the service is first class, the food is of an extremely high standard, whilst the hospitality from the French team is undoubtebly second to none. L’Atelier de Joël Robuchon really has developed the perfect formula to create one of London’s finest dining experiences. Chapeau!

Expect to pay around £150 for two people including wine.

For more information, or to make a reservation, visit www.joelrobuchon.co.uk.