Heirlooms Ltd, one of the UK’s leading manufacturers of bespoke fine linens, has received a much coveted gift from the Royal Family – it joins the ranks of less than 200 companies honoured with holding the grant of The Prince Of Wales’ Royal Warrant.

The Warrant took effect from 1st January 2012 and has been approved for the next five years. Heirlooms Ltd is already “By Appointment to Her Majesty The Queen” and feels doubly honoured to receive this second Royal Warrant. It is a very public endorsement, not only of the quality of the company’s fine linens and their high level of service, but also their ethical and environmental credentials, all of which are strenuously scrutinised before HRH decides that a company is fit to hold his Warrant and be styled “By Appointment to HRH The Prince of Wales”.

Heirlooms Ltd supply table, bed and bathroom linens to several members of the British royal family and have been doing so since 2001.

General Manager Ruth Douglas said: “We were delighted to be notified by the Lord Chamberlain’s Office that Heirlooms Ltd had been granted the Royal Warrant of Appointment to the Prince of Wales. It is the most prestigious of endorsements and is the ultimate confirmation of the quality and service of Heirlooms Ltd.  As a company we are very proud to supply linens to many of the Royal Households and are delighted that our linens are part of royal housekeeping. There could be no greater honour or privilege.” 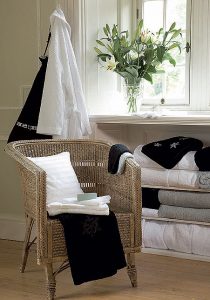 Founded in 1984 by Elizabeth Murray MBE, Heirlooms Ltd has evolved into one of the best linen manufacturers in the world, making for both the bespoke and readymade markets. Synonymous with the highest standards of quality, the company’s linens are to be found in many of the world’s finest superyachts, private homes and world-class hotels.

Heirlooms  holds a premier position within the industry and has a world renowned reputation for excellence, uncompromising attention to detail and exceptional  expertise in interpreting and supplying the needs of its customers, whether they be for basic linens, or those fit for a king or queen, as they often are. Each item is crafted and manufactured at its production facility in West Sussex where its accomplished embroiderers, designers and skilled machinists create linens of timeless elegance to complement even the most demanding of briefs on style and budget.

Heirlooms Ltd likes to exceed the expectations of clients who already have very high standards. Its consistently busy order book, and this latest honour, would suggest that it is succeeding.