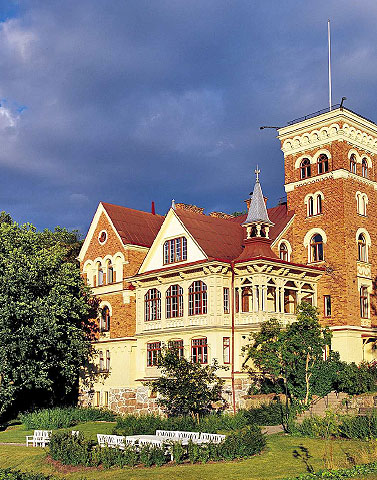 The new development takes the same American New England theme found in the hotel and offers new spaces for dining, meetings and events. Dubbed Stockholm’s Newport, the hotel is situated on the water’s edge in a harbor inlet, giving guests the opportunity to swim in the clear waters directly in front of the property.

The interior takes inspiration from the nautical design of historic America’s Cup J-class boats and is decked out in red, white and blue from the American ‘Stars and Stripes’ flag. With its own 25-berth guest harbor and sweeping views of the Royal Djurgården, Hotel J evokes warm feelings of comfort and ease, just like in a private boat

New Red Brick House
Adjacent to the original Hotel J, the new red brick house features 113 rooms, a meeting room for 160 people and a lounge. The new building is designed in harmony with the existing wing. Designed by Peter Agren from Millimeter Arkitekter, the Newport-inspired rooms feature stunning views of the coast and rooms on the top floor with individual terraces overlooking the water.

The Restored Summer House
The seven-storey ‘Tornvilla’ is a historical building that was built in 1889 as the magnificent summer residence of wealthy building contractor Erik Fredlundh. The building is located adjacent to the existing building and new wing and now acts as the grand focal point of the hotel with living, social and dining spaces. Interior designers Anna-Johanna Bonnier and Lena Widenfelt kept the original historic features, including carefully selected wallpapers, historic tiled stoves and painted ceilings, and added practical functions and quirky touches. The villa comprises five meeting rooms and a function space, a gym, a breakfast restaurant and The Club House restaurant with a lounge and bar. A jetty, garden and watch-tower provide outdoor spaces for entertaining and enjoyment.

The Club House Restaurant
A highlight of Tornvilla is the new à la carte restaurant The Club House. Stefano Catenacci, its Gastronomic Director, is the man behind its culinary concept. Catenacci is brother to Alessandro Catenacci, owner of the hotel, and is an acclaimed chef and caterer to the Swedish Royal family. North American influences dominate its décor and food offerings, including dishes like Soft Shell Crab, Red Snapper Saltimbocca and Black Licorice Whoopie Pie. The Club House also features a lounge and bar and will open an outdoor terrace that overlooks Stockholm’s scenic harbor next summer.

Hotel J is part of the Nobis group that also includes Nobis Hotel and Hotel Skeppsholmen.