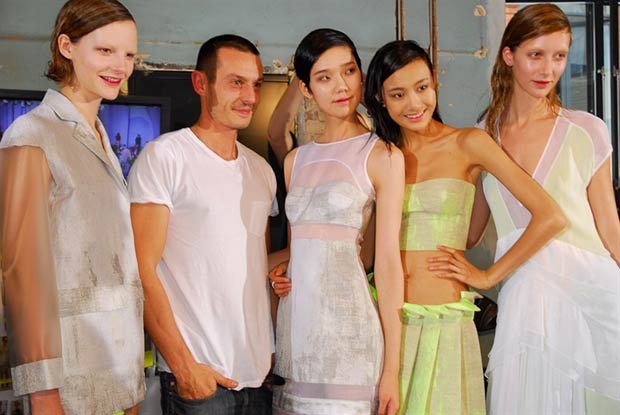 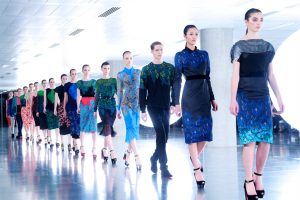 The Award, which is now in its third year, was established to further enhance the reputation of London’s rising stars and assist in the development of their businesses. It comprises of £200,000 and access to director level mentors across the industry. The BFC will develop a bespoke mentoring programme tailored specifically to assist in achieving Jonathan Saunders business goals for the next twelve months with the aspiration that the network developed during this year will endure throughout his career as he makes the transition from a developing creative business into a global fashion brand. The shortlisted designers for the fund were: Jonathan Saunders, Marios Schwab, Mary Katrantzou, Meadham Kirchhoff, Nicholas Kirkwood, Peter Pilotto, Richard Nicoll, Roksanda Ilincic and Zoe Jordan.

The panel’s decision was based on the strength of Jonathan Saunders catwalk and pre-collections over the past few seasons and the acclaim that he has received from UK and international media and buyers. He demonstrated a clear and concise view on the areas in which he hopes to develop his business over the next twelve months and beyond. Nine designers were shortlisted by a panel of representatives of Fund sponsors. All of those shortlisted were then invited to present their collections and future plans to the judging panel of Fund sponsor representatives and industry experts chaired by Alexandra Shulman, Editor of British Vogue. All of those shortlisted will have access to support from the mentoring panel either directly or through Marigay McKee, Chief Merchant, Harrods who will chair the mentoring panel. 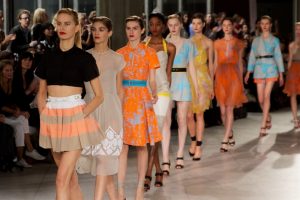 Scottish born Jonathan Saunders graduated from the Glasgow School of Art in 1999 with a BA and then graduated with an MA distinction from Central St Martin’s in 2002, studying Printed Textiles in both courses. Jonathan then went on to win the Fashion Enterprise award given to him by the BFC in September 2006 followed by the Elle Style Award Designer of the Year in 2007. Jonathan has also designed for Pollini between 2008 and March 2010 and recent collaborations for his own label have included Topshop and US brand Target and his own name label in stocked in stores around the world including Bergdorf Goodman, Hudson Bay, Liberty’s, Luisa Via Roma, Net-a-Porter and Printemps.

The British Fashion Council has an international reputation for supporting emerging talent through its existing schemes; NEWGEN supported by TOPSHOP, NEWGEN MEN sponsored by Topman and Fashion Forward. The BFC/Vogue Designer Fashion Fund aids business growth and create employment opportunities, it is complementary to existing support schemes and focuses on developing profile and opportunities for British designer businesses.

The Fund was launched by BFC Chairman Harold Tillman in September 2008. Vogue, headline sponsor, whose March issue is on sale 6th February, will showcase the talents of all nine finalists.

Jonathan Saunders, said “I’m so happy about winning the fund. The last 12 months have been an exciting time for me and my team and I’m very proud of all their hard work. We have many exciting plans for the near future and this along with the support network provided by the BFC will enable us to achieve our goals.”

Caroline Rush, CEO of BFC, commented “The BFC/Vogue Designer Fashion Fund is aimed to assist our very exceptional British designers who during the application process show that they have the potential and business acumen to take the development of their brand to the next step and make the transition to progress their business into a commercial global fashion brand. The panel felt that this really is Jonathan’s moment and he truly deserves to be the recipient of the fund prize.”

Alexandra Shulman, Editor of British Vogue, said “I am delighted that Jonathan has won this year’s award. His recent collections have shown that he is a designer who can provide beautiful clothes that women enjoy wearing and he is in a great position to build on his current success.”

You can more information about Jonathan Saunders here

How to Grow Your Own Wedding Bouquet and Flower Arrangements