On January 10th in Hyères (France), on of the most famous of all classic racing yachts, the Lak II (1939), will be brought to auction by SVV Jean-Emmanuel Prunier (Louviers, France) and La Suite (Barcelona).

The Lak II was built for the Marquis de Ávila, a passionate sailor, subsequently changing hands to Baron Marcel von Bich (1914-1994), one of the inventors of the biro, till it arrived in the hands of the current owner. 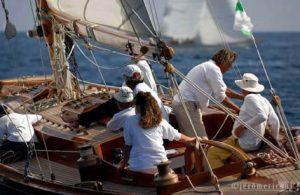 The Lak II is in an exceptionally good condition as it has recently undergone a complete restoration. The January auction includes the existing mooring located a few miles from Saint-Tropez and Marseille. The Lak II is a 14 meter long sloop designed by the also legendary André Mauric, having been built for the Marquis de Avila, who captained his first journey across the Bay of Marseille on the day of the declaration of war on Germany on 3 September 1939.

It is said that the Lak II was hidden under a pile of coal to prevent being seized. After the French liberation, the boat was used in the port of Marseille for relaxation and fun, and in the 60s, the aforementioned Baron Von Bich used it to train with the ‘Constellation’.

Having been fully restored in 2006 by ‘Classic Works’ over a period 18 months. As reported by the restorer, after removing the interior, they found that part of the trama was damaged and decided to repair it using the original technique (steamed curvature); to avoid this problem in the future, they installed a ‘greenhouse-effect’ bilge. They also installed a teak deck, and the add-ons were removed to restore the original dimensions established by André Mauric. After finishing the hull, they built new interiors, and replaced all the equipment, electricity and plumbing. In 2007 the Lak II won the Barcelona-Palma de Mallorca race trophy.

The Lak II event will be at Port St. Pierre, Hyeres, France